Accessibility links
A Journey Of Pain And Beauty: On Becoming Transgender In India : Parallels Abhina Aher is a member of the country's storied, yet marginalized, transgender community. Last week, the India's highest court legally recognized the group as a new gender — neither male nor female. 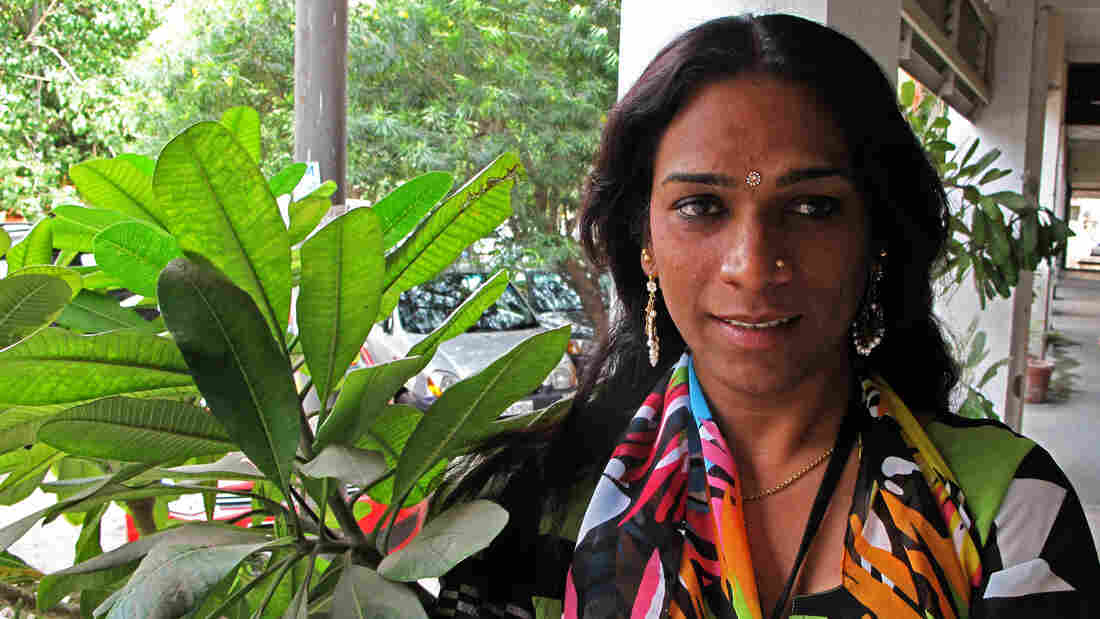 Abhina Aher was born a boy biologically and is now a hijra, a member of an ancient transgender community in India. Of her painful physical and psychological transformation, Aher remembers now: "I just wanted to become a beautiful butterfly." Julie McCarthy/NPR hide caption 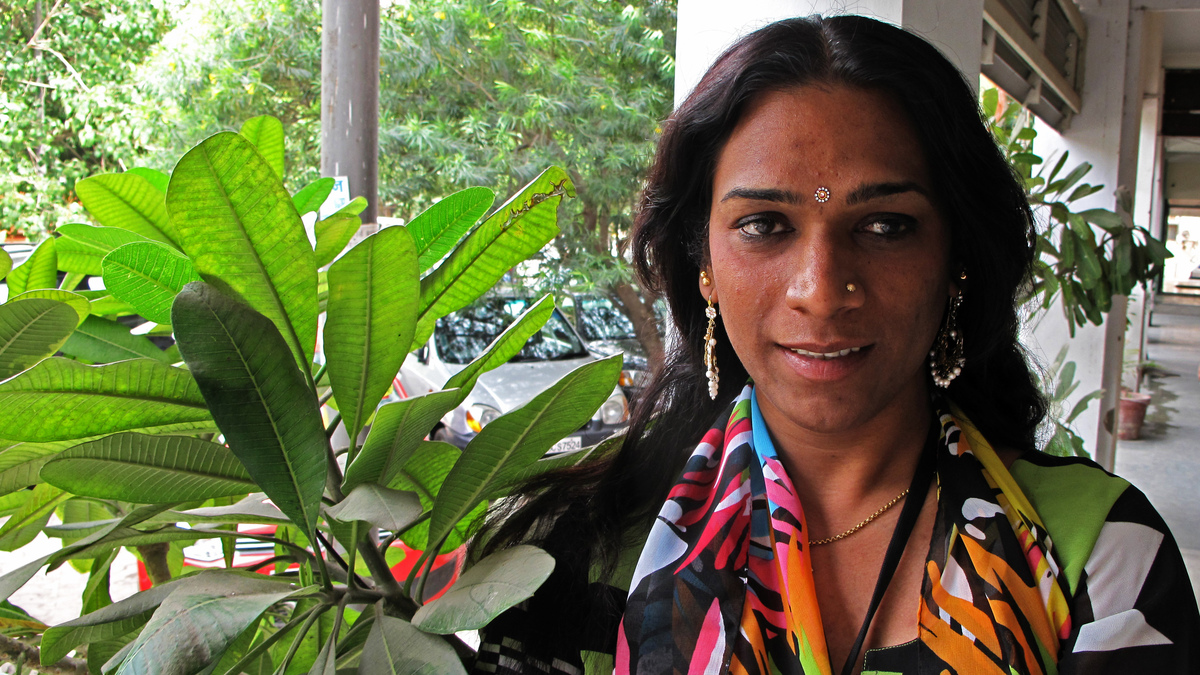 Abhina Aher was born a boy biologically and is now a hijra, a member of an ancient transgender community in India. Of her painful physical and psychological transformation, Aher remembers now: "I just wanted to become a beautiful butterfly."

The signs came early that Abhina Aher was different.

Born a boy biologically and given the male name Abhijit, Aher grew up in a middle-class neighborhood of Mumbai, India. The son of a single mother who nurtured a love of dance, Aher would watch enthralled as she performed.

"I used to love to wear the clothes that my mother used to wear — her jewelry, her makeup," Aher, now 37, recalls. "That is something which used to extremely fascinate me."

Draped in a bright sari, gold earrings and painted nails, Aher is, by outward appearance, a female, preferring to be addressed as a woman.

She has undertaken a long and arduous journey, rejecting her biological sex and opting to become a hijra — a member of an ancient transgender community in India, popularly referred to as eunuchs. 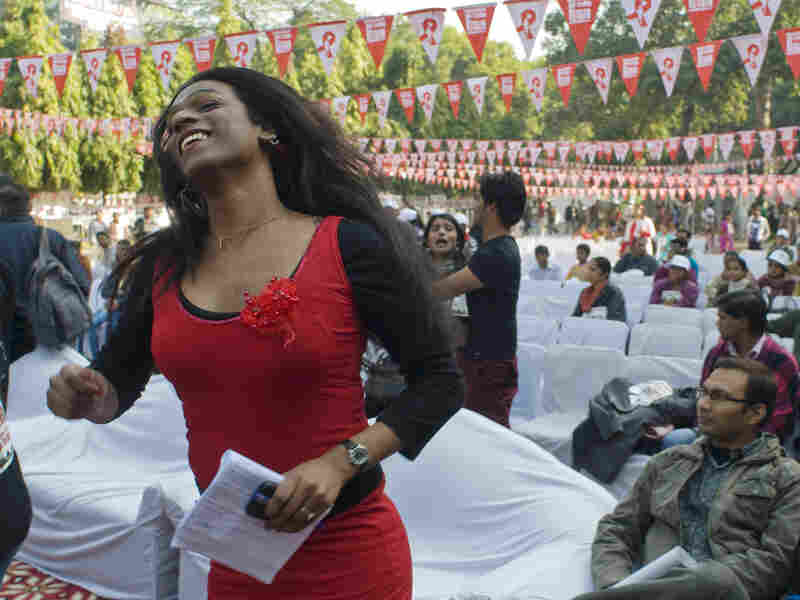 Aher dances during an event observing World AIDS Day in New Delhi on Dec. 2, 2012. Of the recent legal ruling, recognizing transgender Indians as a third gender, she says: "We have put a foot inside a door, which is a door of hope, and we will open it — very, very soon." Anna Zieminski/AFP/Getty Images hide caption 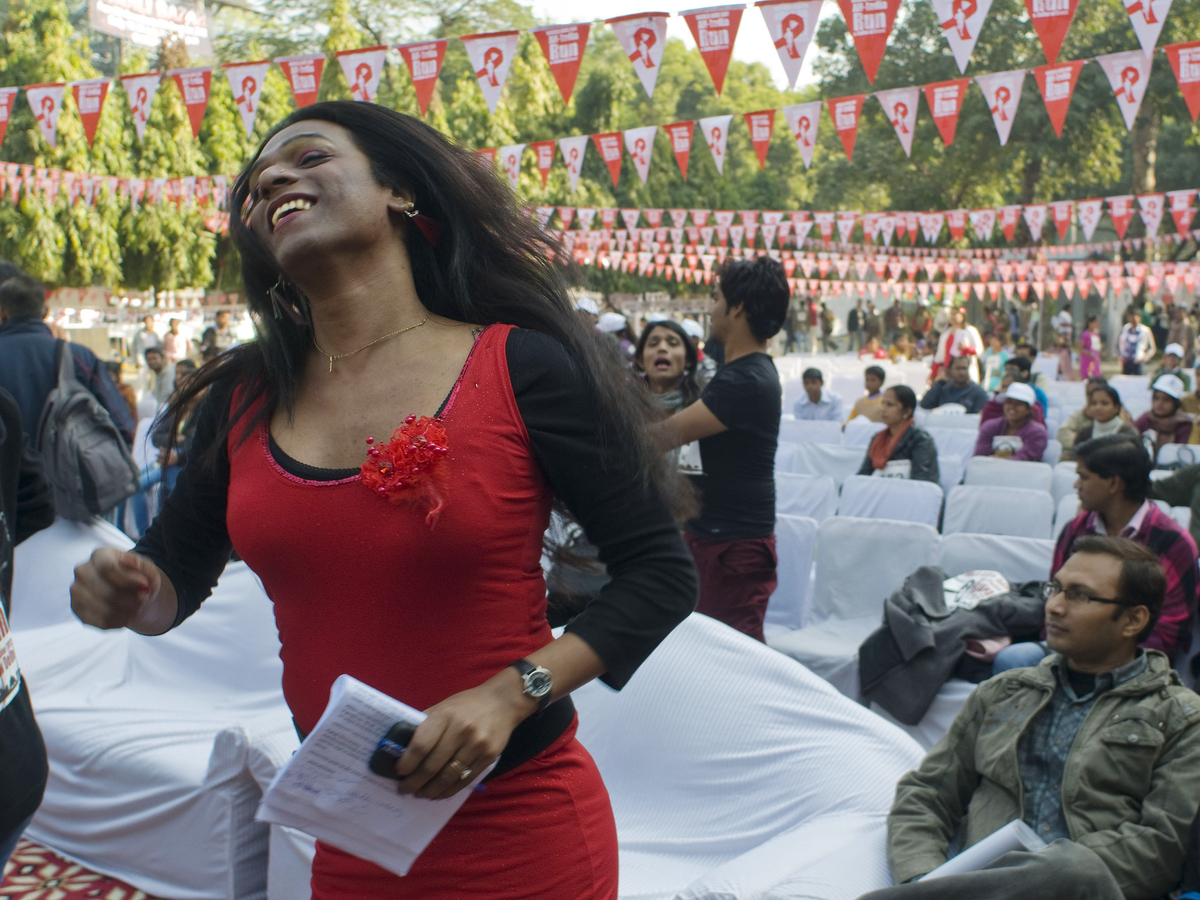 Aher dances during an event observing World AIDS Day in New Delhi on Dec. 2, 2012. Of the recent legal ruling, recognizing transgender Indians as a third gender, she says: "We have put a foot inside a door, which is a door of hope, and we will open it — very, very soon."

This week, India's Supreme Court handed down a landmark ruling for hijras and other transgender Indians, by recognizing a third gender under the law that is neither male nor female. The sweeping decision redefines their rights and the state's obligation to them as one of India's most marginalized groups.

Aher has felt that marginalization from a young age.

With his mother working as a clerk in the state government, Aher was raised by a maid who indulged the fantasies of an only child, including a fascination with a mother's jingling anklets.

"I was mesmerized by that. When I used to be at home, I used to have grand performances, where I'm calling all the neighbors and dancing in front of them and putting up a show exactly replicating what my mother is doing on the stage," Aher remembers. "One fine day, she just found out, and she just got really mad about it. I was asked to sit in front of a god and make a pledge that I will never do that again."

'A Huge Feeling Of Incompleteness'

Things grew more complicated as Aher grew more effeminate and became the object of abuse — dragged into the school library, stripped and taunted by older male students. Aher's teacher was no source of comfort: She declared the tormentors were in the right.

"She categorically said to me, 'Your friends are doing this to you because you are behaving in an extremely feminine way and that's what is an issue,' " Aher says.

To resolve the deepening complexities of the teenager's sexual identity, a psychiatrist prescribed sitting "in a dark room" and taking two Tylenol. 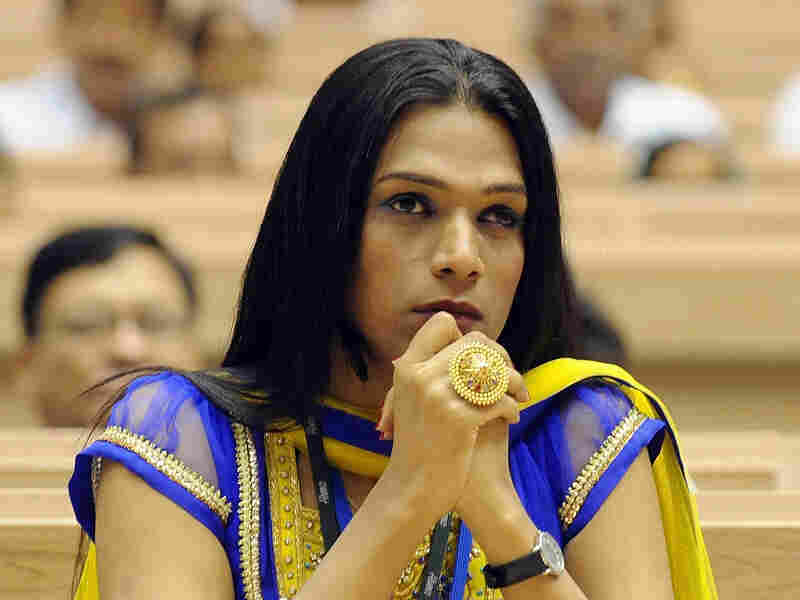 Aher attends a national conference on HIV-AIDS in New Delhi on July 4, 2011. Unlike many other hijras, she holds a conventional job as a project manager with an HIV-AIDS group. Prakash Singh/AFP/Getty Images hide caption 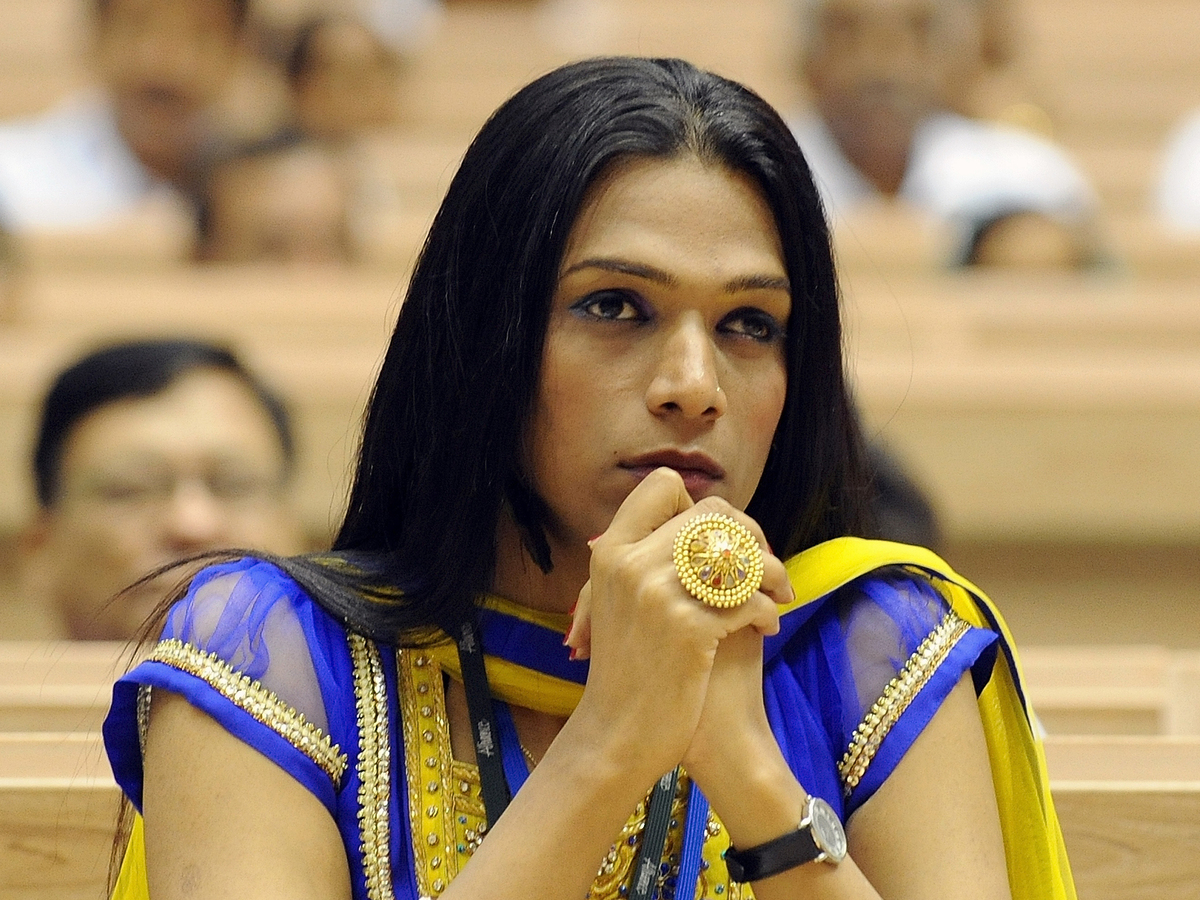 Aher attends a national conference on HIV-AIDS in New Delhi on July 4, 2011. Unlike many other hijras, she holds a conventional job as a project manager with an HIV-AIDS group.

"Which we tried for some time — and my mother took me to a lot of those saints and a lot of temples also to make sure that I sort of come back to what I should be," Aher says.

Aher was told to behave more "manly," sever contact with girls who were a feminizing influence and wear male clothing. And Aher obliged so as not to bring "shame" on her mother.

"I had to do that almost for 10 to 15 years. I used to watch myself, how I walk, how I talk, how I behave, how I dress up, just to hide my sexuality, just to fit into the heterosexual world," Aher says. "I finished my education ... and I started working as a software engineer. There was a huge feeling of incompleteness all the time — having something wrong with your body all the time, not being able to connect with your soul all the time."

Confused about what was happening, Aher attempted suicide three times — and survived each attempt.

"I could not die," Aher says with a smile. "And that was turning point in life, because I thought that since I did not die, let me try to live now."

The strains with Aher's mother became so serious that while they lived under the same roof, the two did not speak for nine years.

All the while, Aher's desire to change gender was growing.

"My urge to become a woman was getting stronger inside me," she says.

A sense of isolation drove Aher into the arms of a guru, or mentor, within a community of like-minded souls known as hijras, who wear saris and make-up and are enshrined in Indian literary epics. Regarded as auspicious, they are invited to bestow blessings at births and dance at weddings.

"Transgender" is an umbrella term that is used to describe a wide range of identities, hijras being one. It is applied to persons whose gender identity does not conform to their biological sex. There is limited data on the estimated population of India's transgender community, but anecdotal evidence puts it between a half a million to two million individuals.

Today, hijras can also be aggressive, especially when not handed money as they wend their way through traffic, begging. Though visible in public, their world is often shrouded in secrecy.

Pakistan's Transgenders In A Category Of Their Own

"They like the mystique," says Aher, adding that initiation into the hijra community is full of rituals.

First, hijras make a pledge to hand over all earnings to the guru, who in exchange supports them inside what is effectively an alternative home as most hijras are runaways or evicted by their families. Then there are the protocols for the physical transformation: As the male form is cast off for the female, initiates cannot cut their hair or shave their face. Traditional "pluckers" from the hijra community pluck all the hair the faces of the initiates. They then start going out in public as females.

Joining this group that traces its roots back to antiquity is not something to be taken lightly.

"It's no joke," Aher says solemnly.

It can be psychologically and physically traumatic; there's body-altering hormone treatment, often followed by operations to reassign sexual organs in a process known as "feminization."

And the changes are costly. Aher says a breast augmentation operation alone can cost about $1,000 — a considerable amount in India. Castration surgeries cost a similar amount.

The physical toll is high as well.

"After the castration, you cannot work for almost 1 1/2 month. It was not an easy task, it was a journey of pain," Aher says now, with a laugh. "I just wanted to become a beautiful butterfly."

To help finance her transformation, Aher says she became a sex worker. Castration is a dangerous business.

"It happens in a dingy room, a 10 by 10 probably. Immediately after the castration, two hours, the hijra is asked to leave that place, because it is illegal," Aher says. "The operations are normally done by quacks, and a lot of hijras die because of that."

Hijras have long been discriminated against in jobs, housing, education and health care. They are routinely turned away from hospitals. Aher recalls being turned away by 17 hotels in a row while on a business trip in the Indian state of Kerala, which is thought to be more enlightened on gender attitudes than other states.

But Aher has triumphed in the workplace: she is a full-time staff member of the Indian HIV-AIDS Alliance responsible for a national campaign aimed at expanding AIDS awareness and prevention. The UNDP reports a high prevalence of HIV (17 to 41 percent) within the hijra community.

In its sweeping ruling, the Supreme Court this week directed the government to provide equal opportunity to the socially and economically deprived transgender population, including health care.

The Court's ruling making a third gender for India's transgender population is a milestone for this conservative country that still regards homosexuality as a criminal offense.

The colonial-era law known as "Section 377" makes gay sex a crime in India and is used to also target the hijra community.

Opponents of the law argue that the penal code established by the British Raj in 1860 prohibiting "carnal intercourse against the order of nature" infringes on fundamentals rights of privacy and expression and has no place in modern India. The Supreme Court convenes Tuesday on whether to hear full arguments on the law.

Section 377 has been used to threaten, extort, and blackmail members of the hijra community, many of whom are forced into the sex trade to survive.

Aher says the fight is not over.

"What we have done is that we have put a foot inside a door, which is a door of hope, and we will open it — very, very soon," she says.

But as well-established as the hijras may be, they are still regarded by many Indians with discomfort and derision. Ridding society of stigmas and superstitions will be the true test of the hijras' hard-fought recognition.