Accessibility links
British Marine's New Mission: Save All Of Kabul's Street Animals : Parallels Street dogs and cats find treatment and get linked up with foreign adopters at a clinic that's helping lower the rabies threat in Kabul. 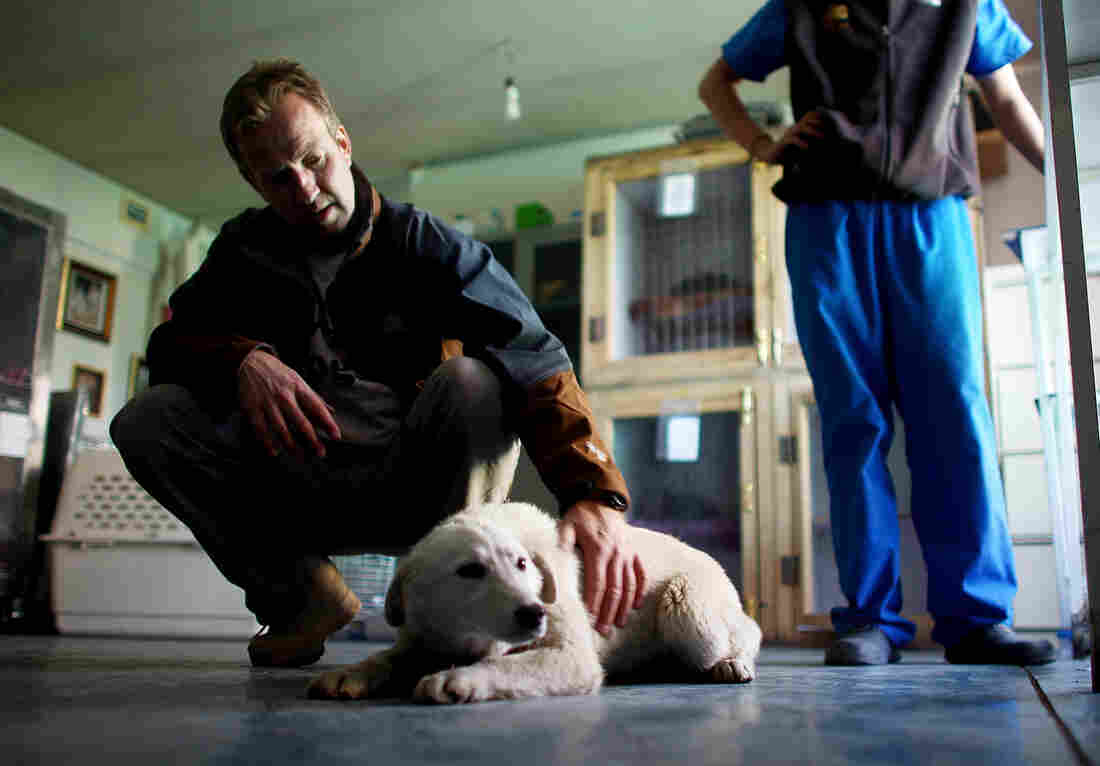 Pen Farthing, founder of Nowzad Dogs in Kabul, pets a dog named Barfi ("Snowy"), who was rescued from an Afghan army base. After rescuing a number of dogs during his tour, Farthing came back to Afghanistan to establish a shelter and clinic that's been able to transport about 700 cats and dogs out of the country. David Gilkey/NPR hide caption

Joey's silky gold hair gleams in the afternoon sun. The big bundle of energy loves to cuddle. He also looks like he could lose a few pounds.

This herding dog is one of the many survival stories here at the Kabul shelter and clinic called Nowzad Dogs. The facility has rescued and treated hundreds of street animals in Afghanistan and has helped reunite hundreds of soldiers and contractors with animals they informally adopted while deployed in the country.

"He's a real contrast to the 10-kilogram [22-pound] skeleton we picked up two year ago," Louise Hastie, the full-time shelter manager at the clinic, says of Joey. Hastie says Joey had no hair and his face was a mass of blood when she found him on the side of the road.

It turned out Joey had leishmaniasis, a treatable parasitic disease. The medication has been working; the only remaining evidence of the disease is the partially missing tip of Joey's nose. 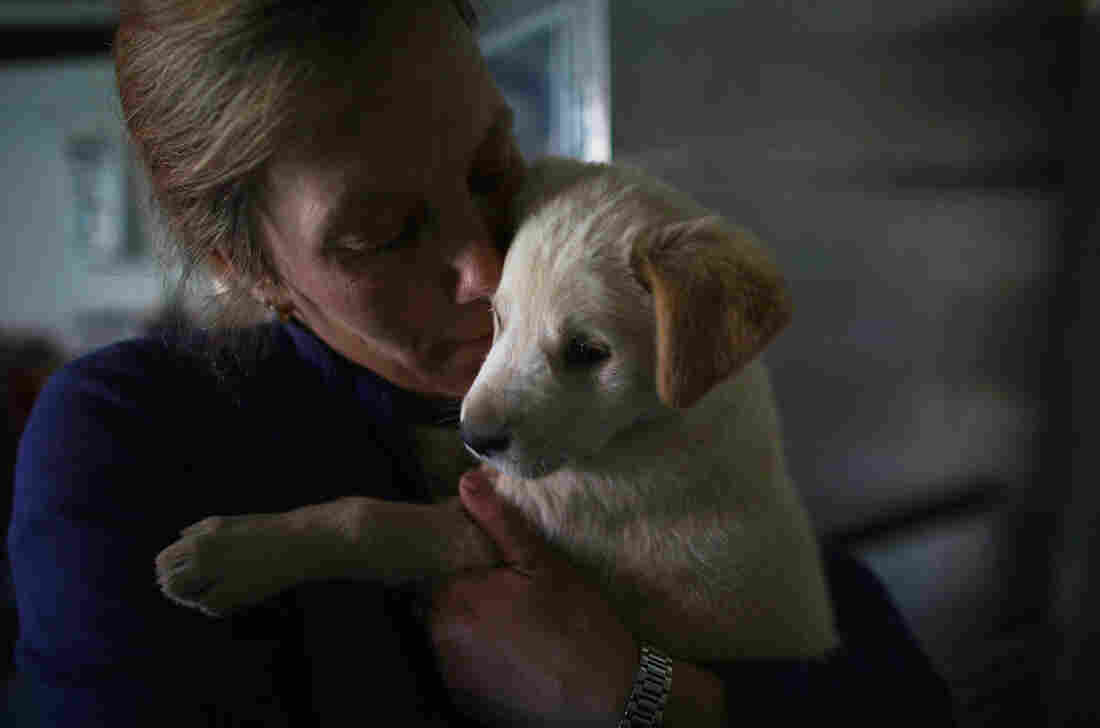 Louise Hastie, the shelter manager of Nowzad Dogs in Kabul, holds a stray puppy named Aki. Afghanistan has a large population of street cats and dogs. While there are no government programs to control the animals, foreigners have taken in some. David Gilkey/NPR hide caption 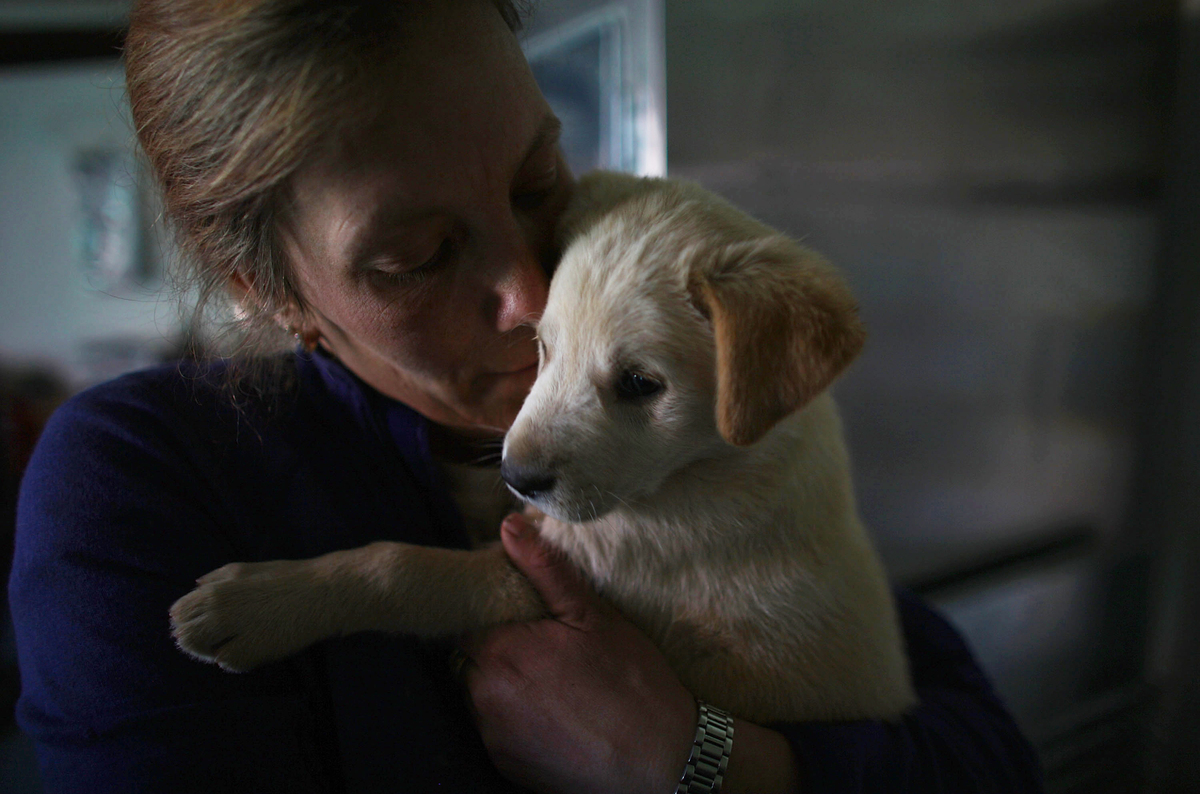 Louise Hastie, the shelter manager of Nowzad Dogs in Kabul, holds a stray puppy named Aki. Afghanistan has a large population of street cats and dogs. While there are no government programs to control the animals, foreigners have taken in some.

"His feet have healed now, he can walk, he can play, and he's kind of like the daddy of the group here in the garden," says Pen Farthing, an ex-Royal Marine and the founder of Nowzad Dogs.

Farthing, a dog lover, founded the charity after his 2006 deployment as a British commando in the southern province of Helmand.

It all started when he was on patrol and came across a dog used in local dogfights. As he writes in his book, One Dog at a Time, he couldn't just leave the battered animal.

He hatched a plan to get the dog out of Nowzad, the town where he was deployed in Helmand, up to Kabul and then on to Britain.

After returning to the United Kingdom, Farthing established Nowzad Dogs. Since then, the group has shipped about 700 animals out of the country to reunite them with soldiers and contractors in Britain, the U.S. and other countries.

In 2010, the mission expanded when Farthing opened the shelter and clinic in Kabul in hopes of making a dent in the stray animal population in Afghanistan.

"The people of Afghanistan want a dog program," he says. "They are absolutely fed up when the kids walk to school, there might be a dog pack in the way, and the kids then have to go a couple of blocks around to get away from these dogs."

Stray dogs, caked with dirt, are a regular feature of Kabul streets. Farthing says the underlying goal of reducing the stray dog population is controlling rabies, which is an underreported problem in Afghanistan. 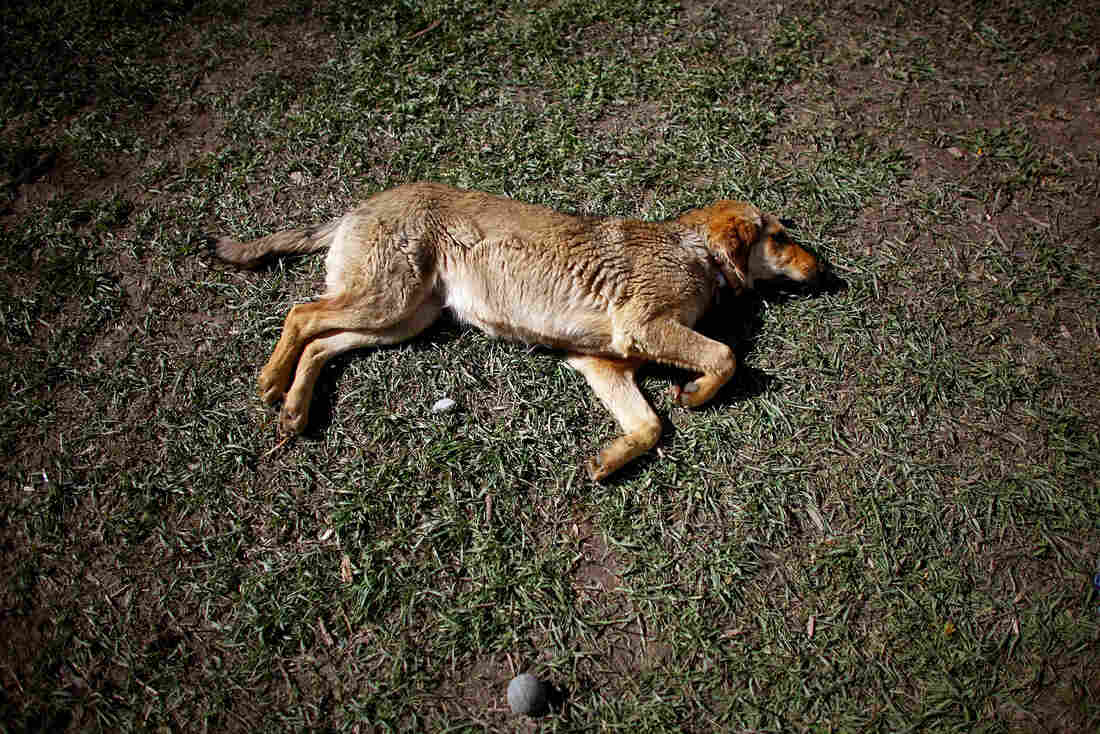 Sandy lies in the sun after playing catch in the backyard of the Nowzad Dogs compound and animal shelter in Kabul. David Gilkey/NPR hide caption

"Our dog shelter is home to about 100 dogs," says Farthing, adding that most are street rescues that it has vaccinated and spayed or neutered.

Sandy, a brown mutt lounging in the shade of Nowzad's garden, was just picked up from an Afghan army base where some British soldiers had been looking after her.

"Sandy's come to us while we vaccinate her, get the fundraising in place and the paperwork ready to get her out of Afghanistan and back to the U.K.," Farthing says.

One challenge with animals rescued by soldiers or contractors is getting them from bases in remote parts of the country to Kabul. Farthing has established an informal network involving methods he won't disclose.

Nowzad, a nonprofit organization, relies on donors to fund the operation and cover the roughly $3,500 cost of transporting a soldier's animal out of the country. The organization is raising money for an ambitious five-year plan to trap, neuter and release all of Kabul's street animals.

And it's not just dogs that Nowzad rescues.

Hastie leads us into the cattery, which houses two dozen cats. All but six feral ones are waiting to be adopted.

Cats of all sizes and colors jump about the room, meowing, playing with toys and occasionally hissing at each other. One is a chatty young creamsicle tabby named Lisa, who quickly hops on my shoulder and speaks loudly into my microphone. 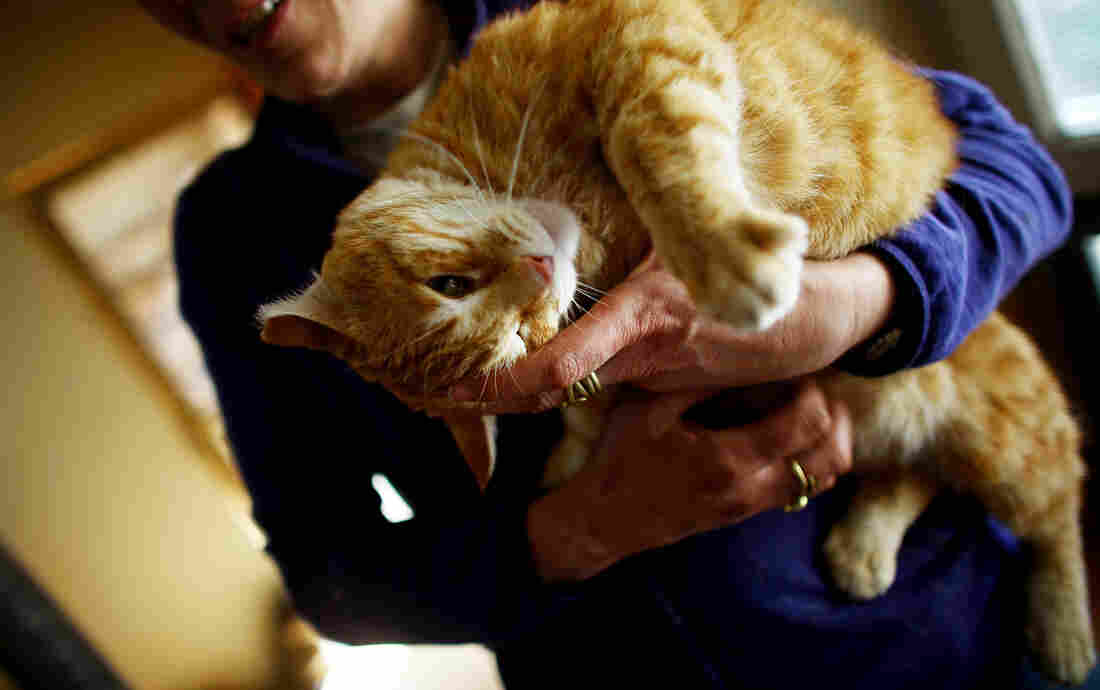 One of the stray cats at the facility, Maki, who was rescued from a Kabul hotel, gets some attention from manager Louise Hastie before feeding time in the cat shelter. David Gilkey/NPR hide caption

There's Spartipus, a beautiful gray tabby who was recently adopted and will soon be headed to Britain.

Hastie says Nowzad tries to find homes outside Afghanistan by advertising the cats on its website. She says it's extremely difficult to find local homes. While some Afghans want pets, many simply don't have enough space.

"Most of the foreigners that are out here have already got cats because they're everywhere in the streets," she says.

Guilty. I plucked a kitten out of my yard when I moved here. Nowzad spayed, vaccinated and chipped her here at the clinic.

One of the other missions of the clinic is to build Afghan capacity. Western vets make periodic visits to the clinic to provide additional training to the local staff. And Nowzad now has the only two female Afghan vets known to be in clinical practice in the country.

"I love animals," says Mariam, who like many Afghans provides only one name. "My dream is to be a good surgeon, vet surgeon. So, I am trying my best."

Mariam is a fifth-year student who's been working at the clinic for two months and is assisting Dr. Abdullah Hadi. 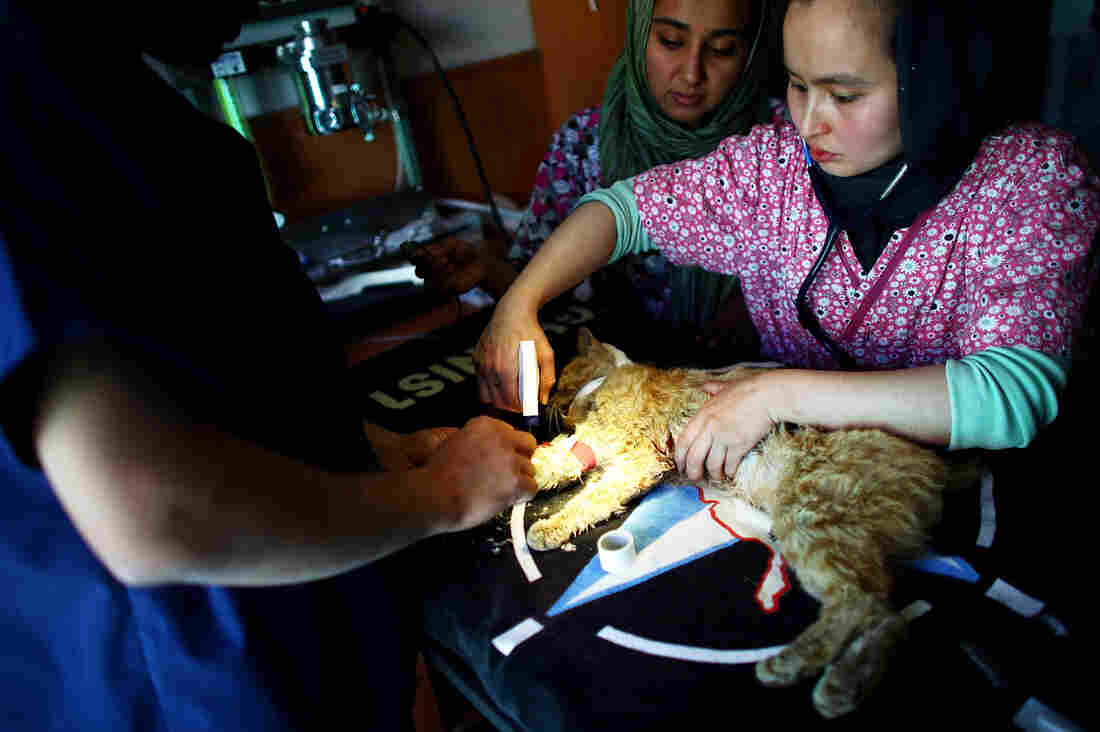 The other female vet is Meliha, who graduated from Kabul University last year. She says 120 students started out in her class and only 35 made it to graduation — seven of them women. The other six are looking for work.

Meliha says working on domesticated animals is not a widely respected profession here, for men or women.

"Most of Afghan people, no, they do not think it is a good job," she says. "But my family, they appreciate me, they encourage me."