Accessibility links
How To Survive In Iraqi Politics : Parallels Prime Minister Nouri al-Maliki has led Iraq for eight years, and despite critics who say he has authoritarian tendencies, an election this week could give him four more years in power.

How To Survive In Iraqi Politics

How To Survive In Iraqi Politics 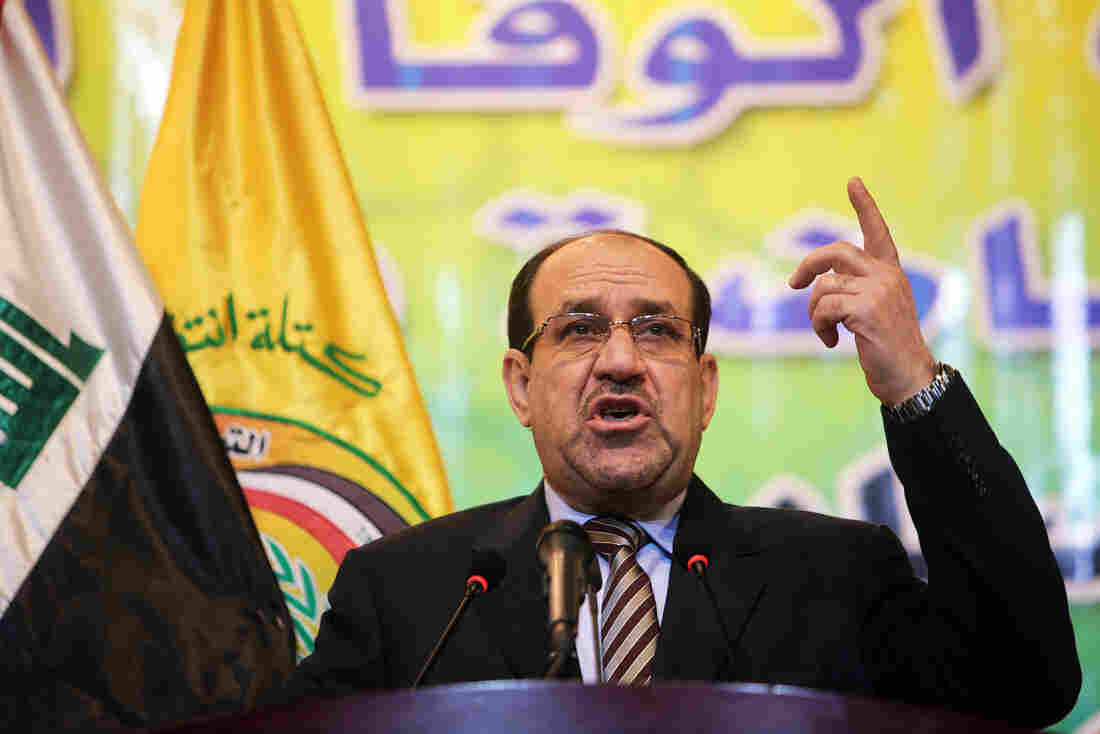 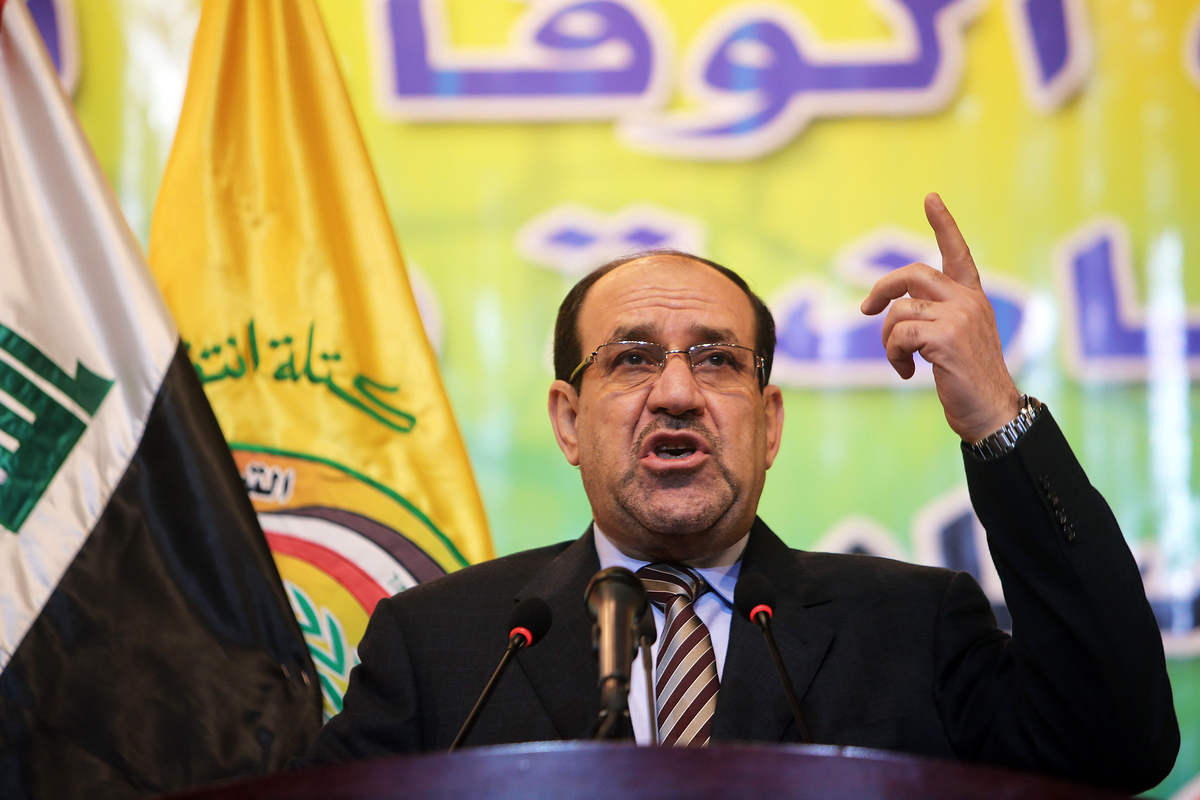 Iraqi Prime Minister Nouri al-Maliki is seeking another four years in power. The country votes Wednesday amid increased violence between the security forces and opposition groups.

Low to the dusty ground, by a reed-fringed river and a lush date palm orchard, is the farmhouse where Iraq's prime minister, Nouri al-Maliki, grew up.

In Iraq, Anbar Faces Extremists Stronger Than Those U.S. Fought

The place is Junaja, one of hundreds of poor, Shiite Muslim farming towns in southern Iraq. Donkey carts jog alongside battered buses. No monument, no ostentation honors Maliki. The only new thing in town is the mosque.

Junaja's most famous son has now led the country for eight turbulent years, and he's making a bid for four more as Iraq holds its first parliamentary elections since U.S. forces withdrew at the end of 2011. Wednesday's vote comes as the country struggles with chronic violence that most often involves Sunni Muslim extremist groups battling the Iraqi security forces.

Maliki's critics say he has authoritarian tendencies, using the security forces and the judiciary to sideline his enemies. In addition, his rivals say he has a harsh sectarian streak that favors the Shiite majority over Sunni Muslims and other minorities.

In His Grandfather's Footsteps

But a lot of Iraqis keep voting for him. A visit to Junaja gives a glimpse of the way much of Iraq thinks of him: a steely, grass-roots rebel who fought the brutal rule of Saddam Hussein, and led the Shiite return to dominance.

Maliki's nephew, Majid al-Maliki, gives me a tour of a childhood bedroom — rough plank shelves, an iron bed — and points proudly to a faded picture of the poet Mohamad al-Mahasin, the prime minister's grandfather.

"He was one of the leaders of the 1920 revolution," says the nephew, referring to the uprising against British colonial rule. "He encouraged the revolt against injustice. If you read his books, you can feel his revolutionary mentality."

Maliki grew up reading his grandfather's poetic calls for the oppressed to "leap like lions," and "work hard for the sake of Islam." He also saw his father arrested for political activities.

It made him into a serious, religious youth, said a childhood friend, Dhamer al-Khaljoudeh, who became the principal of the school they attended together.

"He even lectured other young boys in the mosque of the village," he says. After Maliki graduated from a university of Baghdad, he took a job as an accountant, but his heart lay in his work with the outlawed Islamist Dawa party.

He worked against the government led by the Baath party, which was dominated by Sunni Muslims. But in the early days of the rule of Saddam Hussein, a policeman came looking for him. Maliki wasn't around, but when he heard he was wanted, he fled. He slipped across the border to Iran, and later went to Syria. 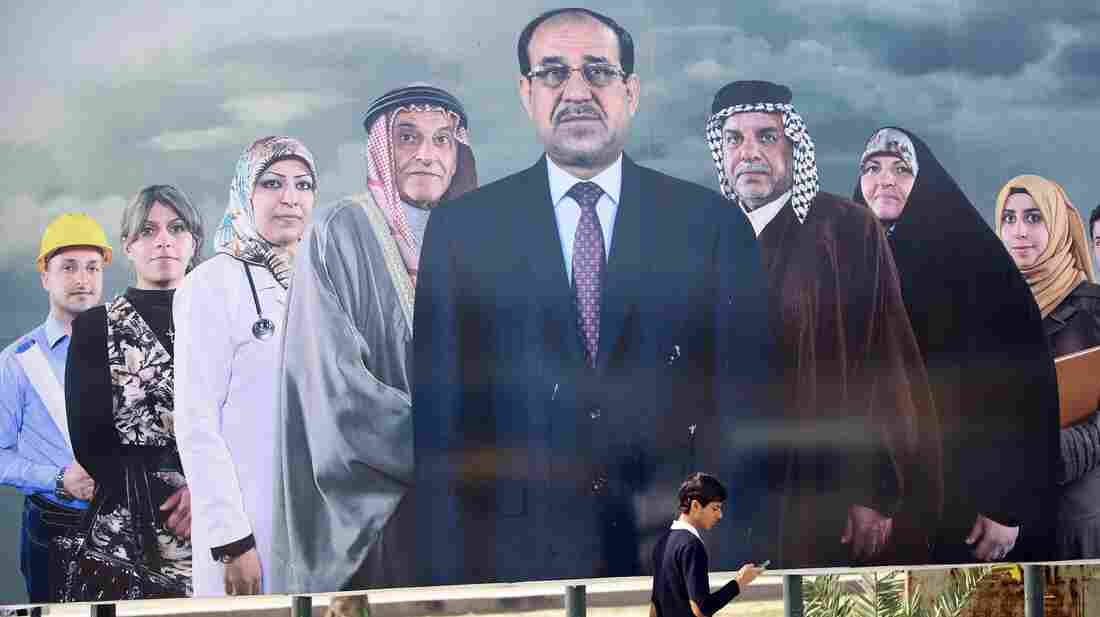 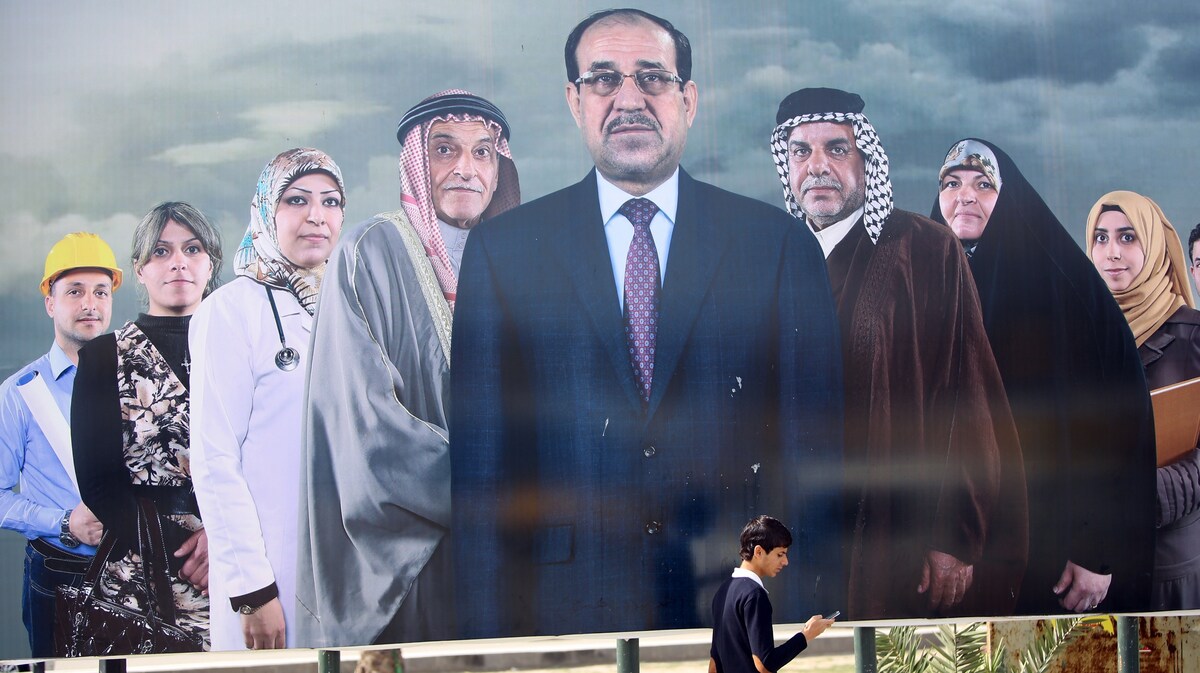 A man walks past a huge election poster in Baghdad promoting Iraqi Prime Minister Nouri al-Maliki (center) and his political allies. Maliki has ruled for eight years and is seeking another four years.

That was 1979. He would spend more than two decades in exile. The family says in his absence 67 of their number were killed by the security forces. Maliki coordinated Dawa and rebel activities. But he couldn't return safely until the U.S.-led invasion in 2003.

Just before Baghdad fell, he was back in Junaja. A nephew of his, Abbas Fadhil Hadi, remembers that Maliki led a symbolic funeral march for those who died under Saddam.

Hadi was a little boy then. He walked with a picture of his late father in his hands, from Junaja to the nearby town of Hindiya, as people streamed out of their houses to join them. In Hindiya, Maliki gave a speech in the new Dawa headquarters — which had housed the local Baath Party and its torture chambers.

"When Mr. Maliki first returned to the area, it's as if he had returned tranquility to our hearts," says Hadi. "He did not just avenge my father. He avenged all martyrs."

On the road from Hindiya back to Baghdad, it's striking that despite the outpouring of support for the prime minister, his image is absent. There's no statue, no library named for him, no pictures at checkpoints or municipal buildings.

People say Maliki hates having his picture up because he wants to avoid the sinister omnipresence of Saddam Hussein. But the longer Maliki stays in power, the more people say he's abusing his power.

Mouaffek al Rubaie, who used to be Maliki's national security adviser, supports the prime minister. He says he's strong, decisive, and he subdued a ferocious insurgency, restoring a semblance of security to Iraq.

But in recent years, Iraqi Sunnis and international rights groups say Maliki has abused the minority, detaining Sunnis without charge and presiding over security forces that torture them in secret prisons. The victims include political leaders opposed to Maliki.

That's bred a resentment that, along with the war in neighboring Syria, has fueled a renewed insurgency in Sunni-dominated parts of the country.

Rubaie agrees with those saying the prime minister has brought too much of the security apparatus under his personal control.

"It's not a sustainable situation for a country to move forward, and it should not continue, it should not have happened in the first instance," he says, adding passionately that dictatorship must never return to Iraq.

Rubaie keeps a vast bronze head of Saddam in his office — one of the many toppled in those heady days in 2003. Draped around it is the rope they used to hang him.

"I want this to be in my office always," he says. "I want to tell people — No. 1 tell myself — that any future ruler, his fate will be the same if he follows the footsteps of Saddam Hussein, if he exercises dictatorship."