Accessibility links
Where Are The Missing Nigerian Schoolgirls? : Parallels More than 250 schoolgirls were seized by a radical Islamist group three weeks ago. The president is finally speaking publicly, but many Nigerians are outraged over what they see as a tepid response.

Where Are The Missing Nigerian Schoolgirls?

Where Are The Missing Nigerian Schoolgirls? 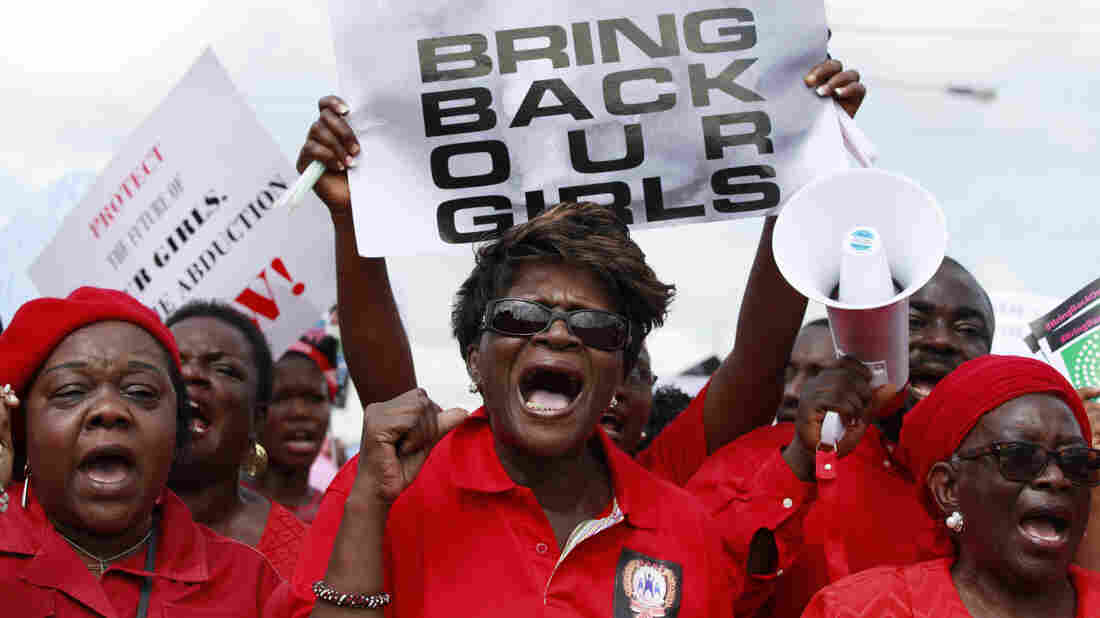 Nigerian women in Lagos on Monday demand that the government do more to rescue the teenage girls who were kidnapped three weeks ago by a radical Islamist group in the northeastern part of the country. The government says it does not know where the girls are being held or what condition they are in. Sunday Alamba/AP hide caption 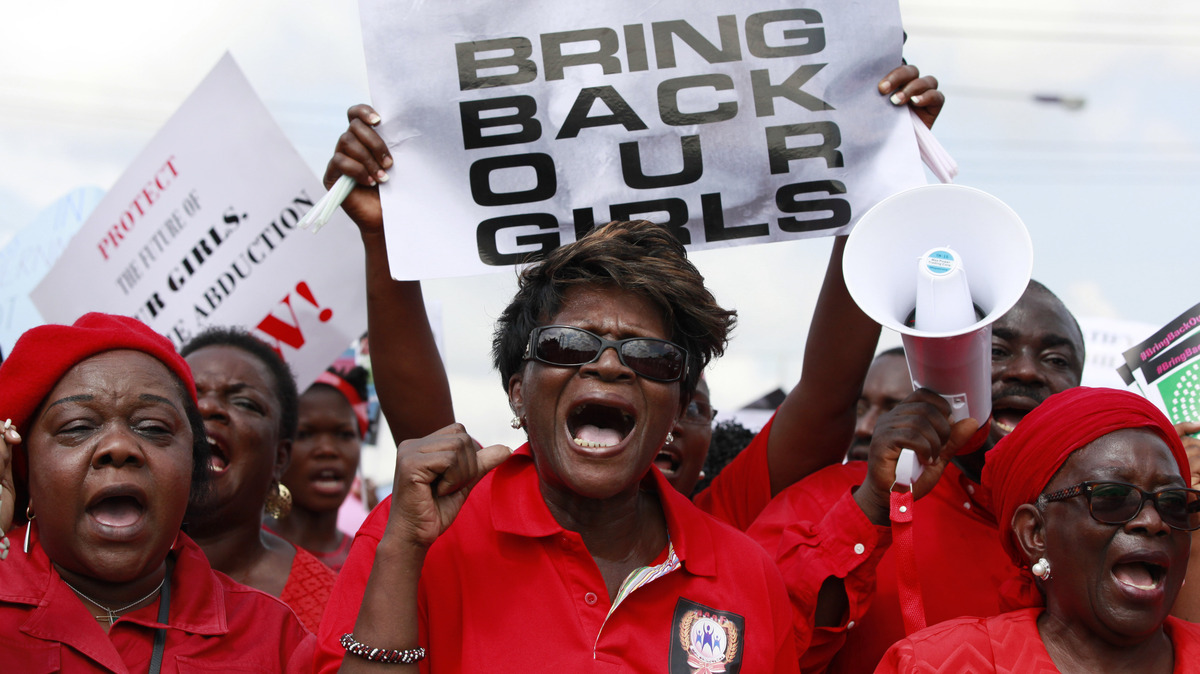 Nigerian women in Lagos on Monday demand that the government do more to rescue the teenage girls who were kidnapped three weeks ago by a radical Islamist group in the northeastern part of the country. The government says it does not know where the girls are being held or what condition they are in.

Children are abducted with depressing regularity in African conflicts, but the seizure of more than 250 schoolgirls in Nigeria is a particularly strange and baffling case.

The radical Islamist group Boko Haram has now released a video saying it seized the girls from their boarding school on April 14 in the small, remote town of Chibok in northeastern Nigeria, the region where the group has waged a violent insurgency over the past five years.

"I abducted your girls. I will sell them in the market, by Allah," the group's leader Abubakar Shekau says in the video.

The girls, ages 16 to 18, have been missing for three weeks, and the president had, until Sunday, said virtually nothing about the case or its efforts to find them.

The case is now starting to receive international attention, partly due to social media, including Twitter's #BringBackOurGirls.

Here are a few of the basics about the missing girls:

1. Who are the kidnappers?

Boko Haram has been waging its insurgency in northern Nigeria, where Muslims are the majority; in the south, Christians account for the largest share of the population.

The name itself says a lot about the group. Boko Haram means "Western education is forbidden," or "sinful." The group has killed hundreds of students, mostly boys, in attacks on schools and has often torched the buildings, as it did in this instance.

In the current case, schools in the region were closed on March 18 out of concern that the group was planning to attack. But the soon-to-graduate girls in Chibok went back to take a physics exam, and that's when Boko Haram struck.

2. Why were girls kidnapped?

Most mass abductions in Africa involve secular warlords who target boys with the intent of turning them into child soldiers. Africa's most notorious warlord, Joseph Kony, and his group, the Lord's Resistance Army, has been seizing children since the 1980s.

Girls and young women have been taken by Kony and others to work in rebel camps or to be used as sex slaves. But in general, rebel groups are looking for potential fighters, and therefore boys tend to be in greater demand.

This is the first time Boko Haram has targeted girls on a mass scale, NPR Africa correspondent Ofeibea Quist-Arcton has reported.

"In the past, when boys have been killed at schools that have been raided, the girls have been spared, told to go home, get married and give up Western education," Quist-Arcton says.

3. How has Nigeria's government responded?

President Goodluck Jonathan had barely mentioned the case until Sunday. As public pressure mounted, he gave a televised briefing and held marathon talks with security chiefs and school officials.

"We promise that anywhere the girls are, we will surely get them out," Jonathan said, according to the BBC.

The parents have been upset with the government's response and pooled their money to buy fuel for motorbikes and to search for the girls themselves.

4. Where are the girls, and what conditions are they in?

The government says it still doesn't know where the girls are. This has raised questions about the competence of the government and the security forces, and whether they are taking the case seriously.

Facts are hard to come by, but the girls were believed to have been taken away in a convoy of vehicles to the Sambisa forest, an insurgent stronghold in the northeast.

Some reports say they were then taken to neighboring countries, including Cameroon and Chad, and that they may have been forced to marry militants for a bride price of $12. However, these reports, and many other details of the case, are unconfirmed.

Two girls reportedly died from snakebites; 20 are said to be ill. Up to 50 escaped, some by jumping off trucks. The Nigerian government now says that 276 girls were kidnapped initially, and 223 remain missing. 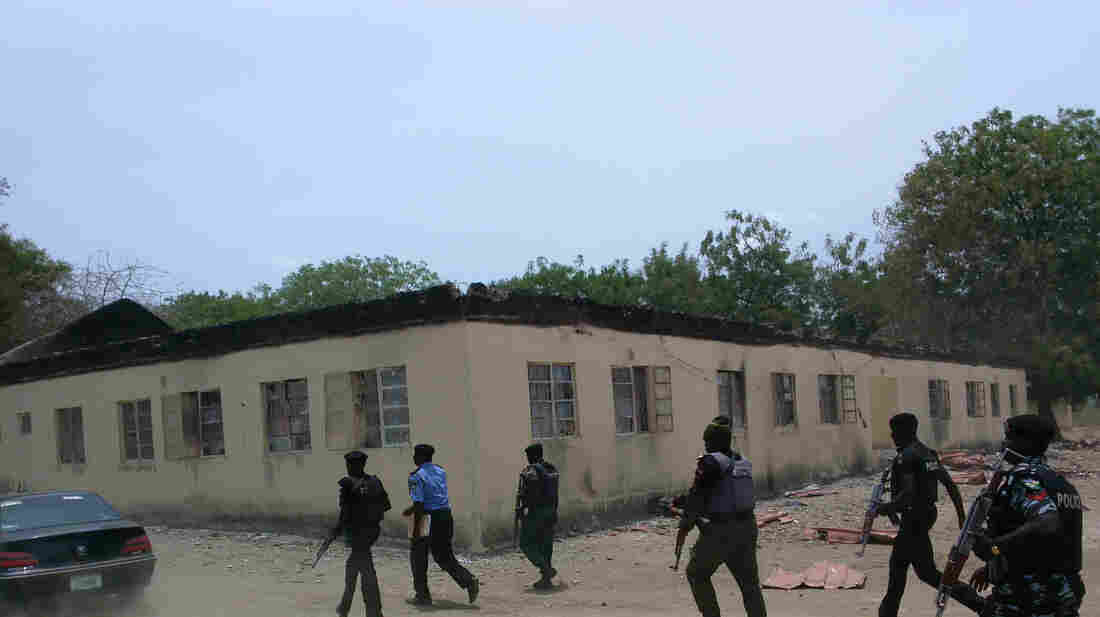 Nigerian security forces walk past the burned-out high school in the northeastern town of Chibok, where schoolgirls were seized on April 14. Dozens of the girls managed to escape by jumping from the back of an open truck or hiding in dense forest. Haruna Umar/AP hide caption

5. What's the status of the Nigerian conflict?

The government says it has the upper hand against Boko Haram, and has been pushing them out of cities in the northeast and forcing them into the hinterland.

However, the group is still capable of carrying out major attacks in the northeast, as well as the capital, Abuja.

Two major bombings have rocked the outskirts of Abuja in recent weeks. One killed more than 70 people on April 14 — the same day the girls were seized — and the second blast took place in the same part of the city last Thursday, killing 19.

Greg Myre is the international editor of NPR.org. You can follow him @gregmyre1.