Accessibility links
The French Ask: Should We Be Building Warships For Russia? : Parallels France's $1.6 billion sale is the biggest ever by a NATO country to Russia. But in the wake of Russia's actions in Ukraine, the French are debating whether they should suspend the deal. 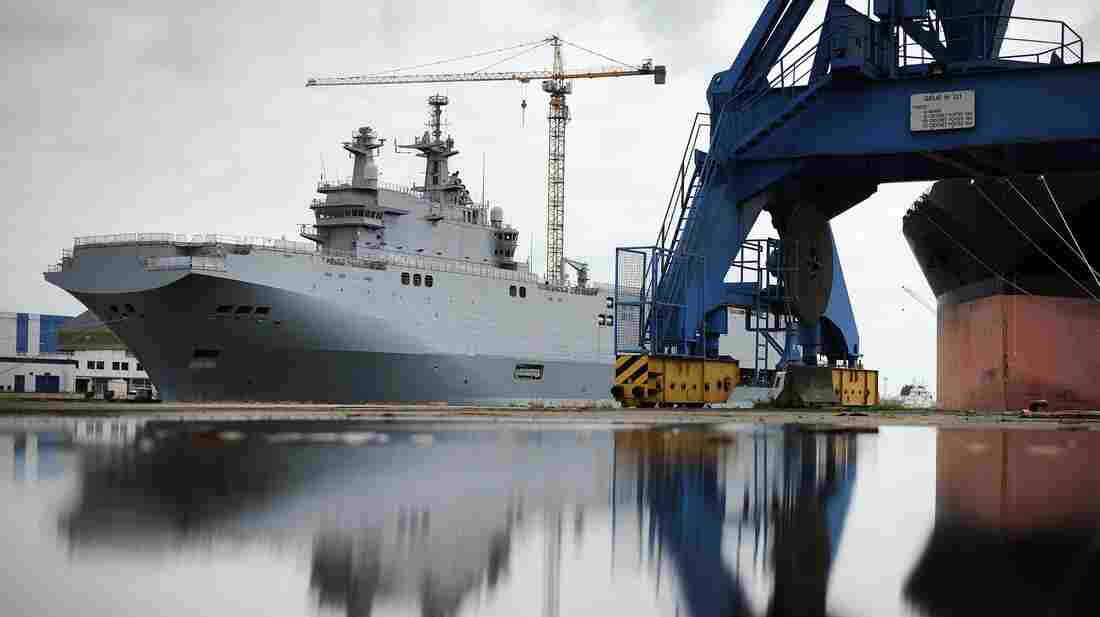 The Vladivostok warship, a Mistral class LHD amphibious vessel ordered by Russia, at the STX France shipyard in Saint-Nazaire, France, on Friday. The Vladivostok is one of two ships Russia ordered from France. Jean-Sebastien Evrard/AFP/Getty Images hide caption 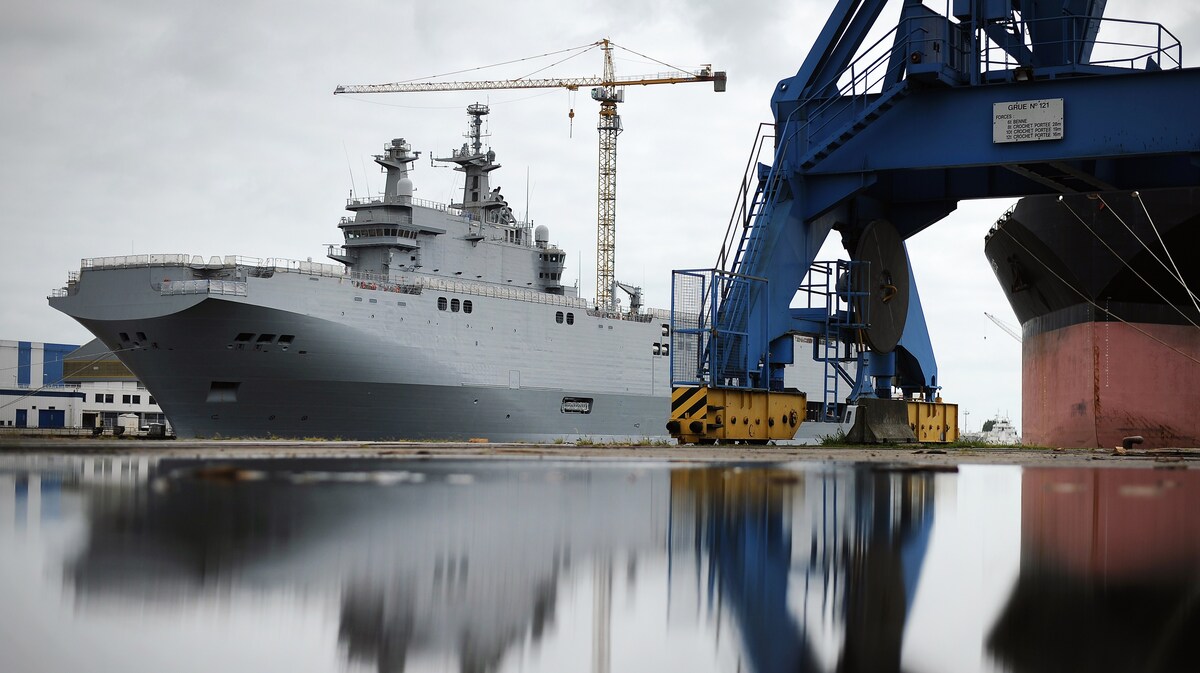 The Vladivostok warship, a Mistral class LHD amphibious vessel ordered by Russia, at the STX France shipyard in Saint-Nazaire, France, on Friday. The Vladivostok is one of two ships Russia ordered from France.

French President Francois Hollande says that for now, France intends to go through with a deal to build two warships for the Russian navy. The first of the Mistral-class assault vessels is supposed to be delivered in October.

The $1.6 billion deal is the biggest sale to Russia ever by a NATO country. And three years ago, when the contract was signed, French officials hailed it as a sign that Moscow should be considered a partner, not an enemy. Still, there were critics among NATO allies even then.

Today, in light of Russia's actions in Ukraine, the warship sale is hugely controversial — even in France.

The French foreign minister is in Washington, D.C., on Tuesday and might face pressure to suspend the sale.

And when asked on a radio talk show recently whether France should suspend the sale, parliament member Bruno Le Maire responded: "Absolutely."

"It's the only way to show Vladimir Putin we're serious," he said. "Putin is playing on Europe's divisions and hesitations."

Le Maire did not want to speak to NPR. Neither did several other politicians approached for interviews.

That's because it's a sensitive issue, says Etienne de Durand, a defense expert at the French Institute for International Relations.

"[There's] a lot of money involved, possibly also jobs at stake, so of course it's a sensitive issue," he says.

De Durand says the warships are an easy target for critics because they're so visible. But there are other European countries with more at stake in Russia than France, he says: Germany because of the industrial and energy links; Britain because of all the Russian money that London manages.

One of the ships is named the Vladivostok, after the far eastern Russian city. The other ship is the Sevastopol — which is the port and naval base in Crimea, which Russia just annexed from Ukraine.

These helicopter assault ships can serve as hospitals or military command centers, with the capacity to carry 16 attack helicopters, 40 tanks and up to 600 troops.

At the Georgian Embassy in Paris, Ambassador Ecaterine Siradze-Delaunay says the events in Ukraine remind her of what happened in her country six years ago.

"It is absolutely like déjà vu because the feelings all Georgians had, including myself, when we saw what was happening in Ukraine, 2008 came back immediately," she says.

In 2008, the Russian army went into its southern neighbor, Georgia, occupying the regions of South Ossetia and Abkhazia. The Kremlin claimed it was protecting the rights of ethnic Russians. Later the commander of the Russian navy said his country would have won the Georgian war much faster if it had had the French warships.

Siradze-Delaunay is diplomatic about whether she thinks France should suspend the deal. She says she understands the economic repercussions, but that there is a "moral responsibility" when facilitating a country that occupies other countries' territories.

Though France is not including advanced command and control systems on Russia's ships, some analysts say the boats will change the power equation in the Black and Baltic seas.

Analyst de Durand disagrees. He says Russia could build the ships on its own, although it would take longer and cost more. But he says the whole discussion about the warships brings up the question of whether military deals can still be done with Russia at all.