Accessibility links
Popes In The Holy Land: After 2,000 Years, A New Tradition : Parallels Pope Francis becomes one of the few pontiffs who have visited the birthplace of Christianity when he makes a three-day journey to the Holy Land where he will reach out to other faiths as well. 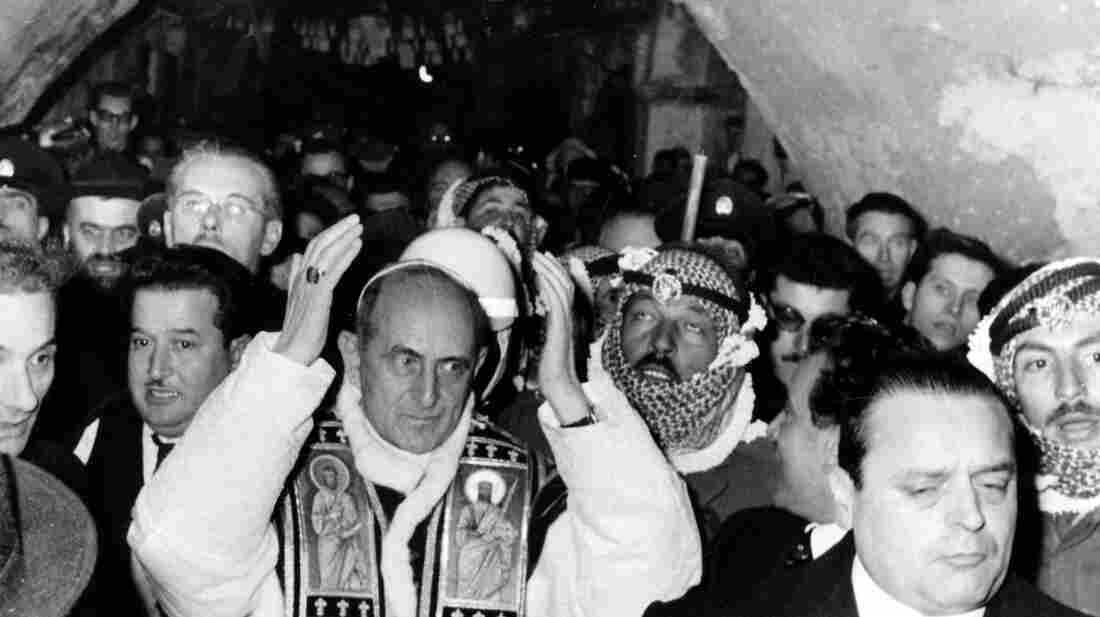 Pope Paul VI is greeted by a cheering crowd in Jerusalem's Old City on Jan. 4, 1964. Despite the city's central role in Christianity, Paul VI was the first pope to visit Jerusalem. AP hide caption 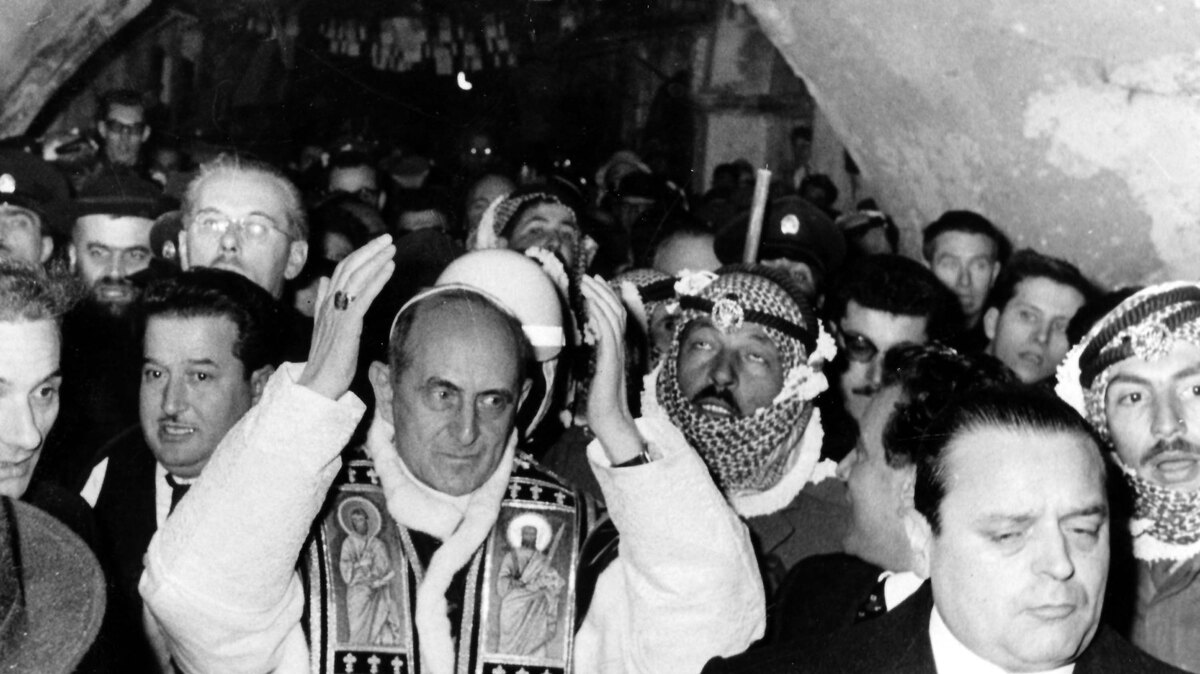 Pope Paul VI is greeted by a cheering crowd in Jerusalem's Old City on Jan. 4, 1964. Despite the city's central role in Christianity, Paul VI was the first pope to visit Jerusalem.

Pop quiz: How many popes have visited Jerusalem over the past 2,000 years?

What papal destination could be more natural than the Holy Land, where the pontiff can walk Jerusalem's stone streets and follow the footsteps of Jesus. Popes have dispatched envoys, emissaries and even Crusader armies to claim the territory for the Catholic Church. And from the Vatican, it's just a short hop across the Mediterranean.

So Pope Francis must be joining a long list of predecessors when he arrives Saturday for a three-day visit in the region, including Monday in Jerusalem.

Well, not exactly. No pope ever traveled to Jerusalem until Paul VI spent one day in the city, on Jan. 4, 1964.

That pilgrimage also marked the first time a reigning pontiff had ever been on an airplane. Equally remarkable, Paul VI was the first pope to leave Italy in more than 150 years.

With that historic trip, the era of the stay-at-home pope was beginning to end. It disappeared for good when the globe-trotting John Paul II became pontiff in 1978.

Still, it took John Paul more than two decades as pope, and trips to dozens of other countries, before he appeared in the Holy Land in 2000. When he did, it was a huge success and established a new papal tradition that has been followed by Pope Benedict, who visited in 2009, and now Pope Francis.

So Francis is the fourth pope to visit the Holy Land, and the third in the past 14 years. 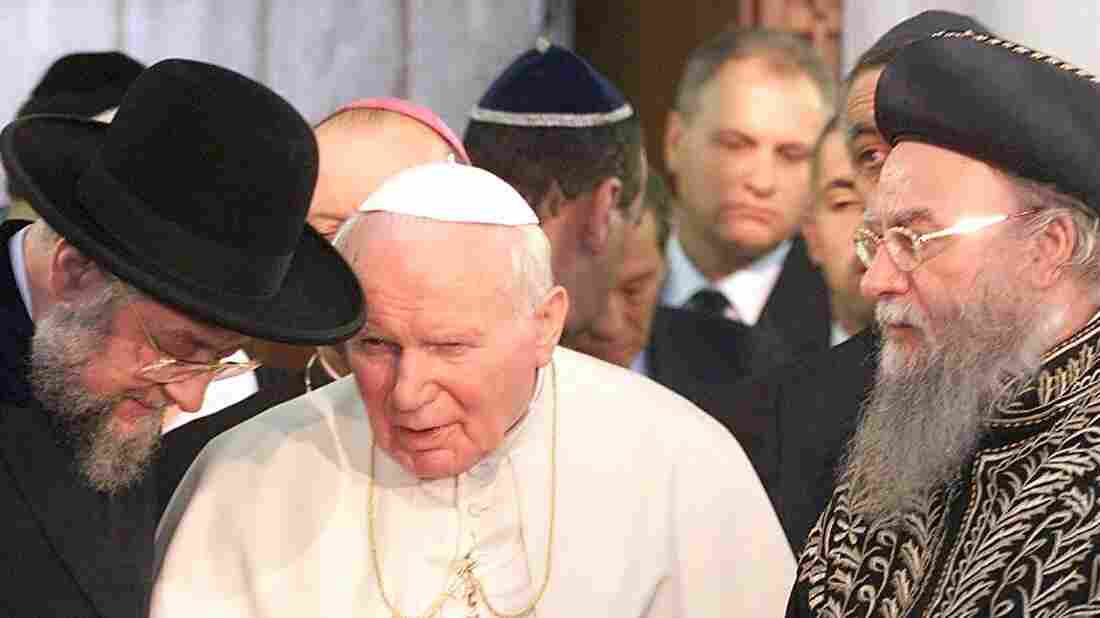 Pope John Paul II speaks to Israel's two head rabbis, Meir Lau (left) and Eliahu Bakshi-Doron (right), during his visit to Jerusalem in 2000. The pontiff reached out to both Jews and Muslims on his trip and was warmly embraced. His successors as pope, Benedict XVI and Francis, have also visited the Holy Land. Gabriel Bouys/AFP/Getty Images hide caption 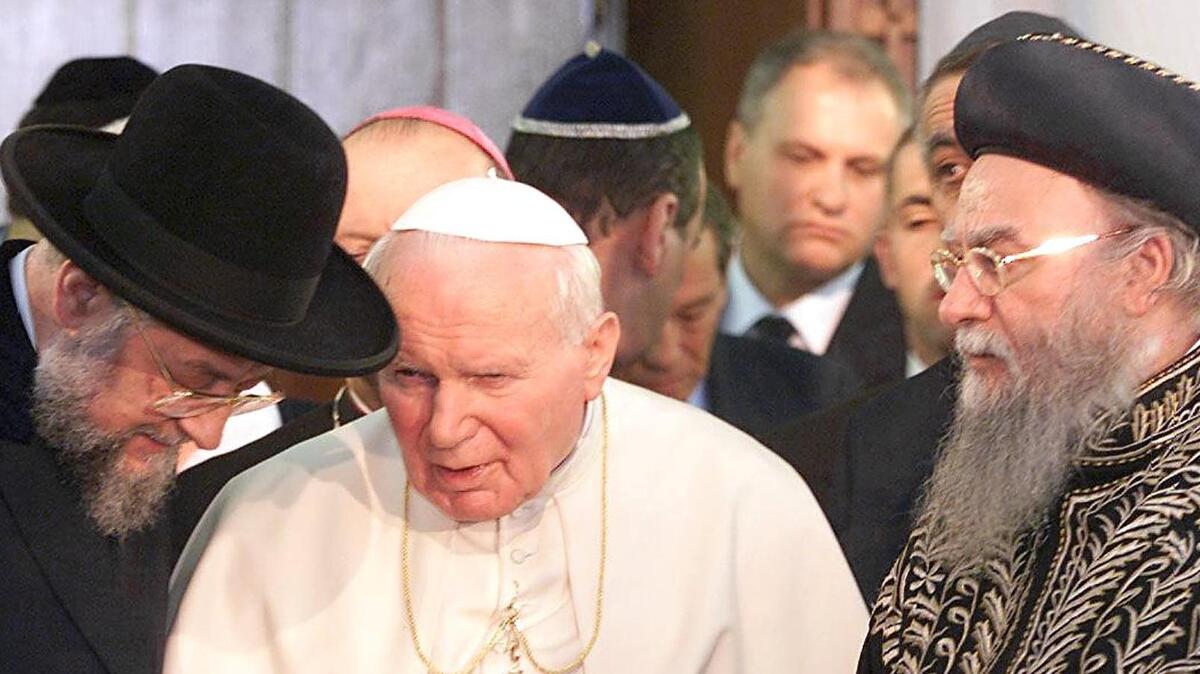 Pope John Paul II speaks to Israel's two head rabbis, Meir Lau (left) and Eliahu Bakshi-Doron (right), during his visit to Jerusalem in 2000. The pontiff reached out to both Jews and Muslims on his trip and was warmly embraced. His successors as pope, Benedict XVI and Francis, have also visited the Holy Land.

Reaching Out To Jews And Muslims

Aside from a trivia question, these papal trips speak to the way the church is attempting to reach out, not only to Catholics, but to other faiths as well.

"Its greatest importance may lie in the fact that it reflects the normalization of relations between the Vatican and the State of Israel," Abraham Foxman, head of the Anti-Defamation League, writes of Pope Francis' visit.

Through much of history, popes weren't welcome in the Holy Land.

For many Muslims, the papacy is still linked to the Crusades of the 11th through the 13th centuries, when successive popes sent armies to battle Muslims and reclaim holy places for the Christians.

Catholics and Jews also had tortured relations that included centuries of Christian anti-Semitism in Europe and the church's official position of neutrality during World War II and the Holocaust.

An important breakthrough came in 1994, when the Vatican and Israel formally established relations, paving the way for better ties and John Paul's 2000 visit.

The pope was warmly embraced by Israelis as he declared that the Catholic Church was "deeply saddened by the hatred, acts of persecution and displays of anti-Semitism directed against the Jews by Christians at any time and in any place."

He also went to Yad Vashem, the Holocaust Museum, and placed a letter in a crack in the Western Wall, the holiest site for Jewish worship.

Likewise, Muslims welcomed the pope with enthusiasm as he toured the West Bank and called for a Palestinian state.

The 1,000-Year-Old Schism That Pope Francis Seeks To Heal

Ironically, popes are now visiting the Holy Land at a time when the Christian population is rapidly dwindling in the region.

A century ago, Christians accounted for around 20 percent of the population in the Middle East, while today it is around 5 percent at most, according to John Allen, a longtime Vatican analyst who now works for The Boston Globe.

Bethlehem, the birthplace of Jesus and now a Palestinian city in the West Bank, was nearly 90 percent Christian in the middle of the last century. Today, Christians are estimated to account for around 20 percent of the town's residents.

"Christians of course are in the firing line in many parts of the Middle East, Syria being the most recent example, but also in Egypt and other places," Allen told NPR this week. "Part of the agenda for visiting this part of the world is always to give a shot in the arm to what remains of the Christian footprint there."

The pope will also be extending his hand to Orthodox Christians. As NPR's Sylvia Poggioli reported earlier this week, the official reason for the pope's pilgrimage is to mark the 50th anniversary of the rapprochement between the Catholic and the Orthodox churches.

The schism between Eastern and Western Christianity dates to 1054. The first step toward reconciling the churches didn't take place until January 1964 — when Pope Paul VI met Orthodox Patriarch Athenagoras of Constantinople on that groundbreaking trip to Jerusalem.

Greg Myre, the international editor of NPR.org, covered Pope John Paul II's visit to the Holy Land in 2000. You can follow him @gregmyre1