Accessibility links
No Surprise Here: Sisi Rolls To Victory In Egypt's Election : Parallels Less than a year after a coup, Abdel Fattah al-Sisi won the presidential election with more than 90 percent of the vote. 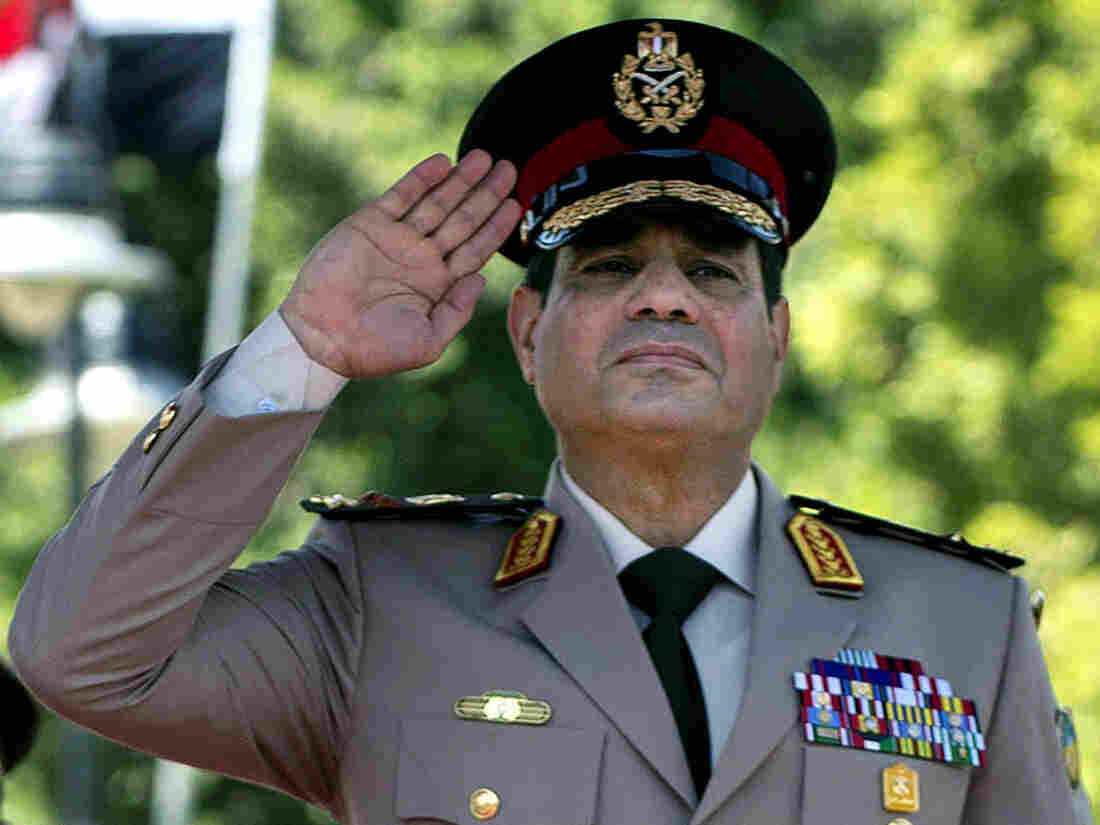 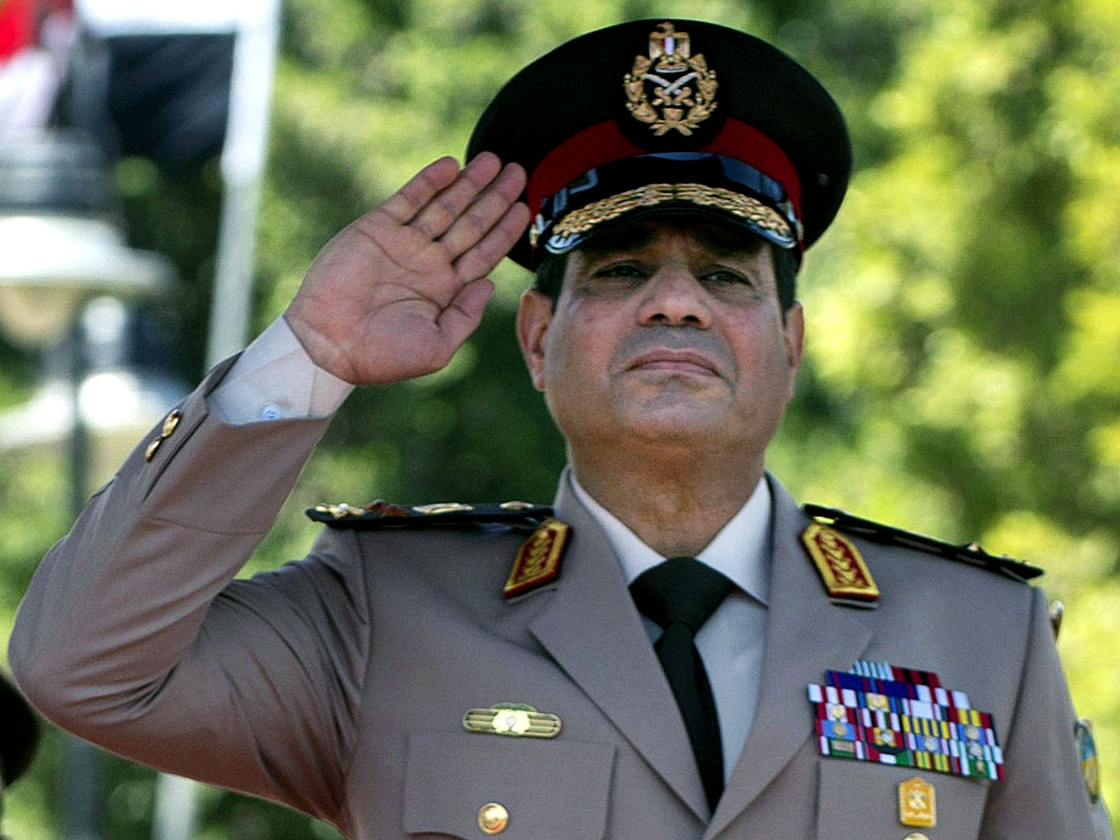 Less than a year after a coup, Egypt's Abdel Fattah al-Sisi has won the country's presidential election with more than 90 percent of the vote. Election monitors widely criticized the way the election campaign was handled.

It was never in doubt, but now it's official. Ex-military chief Abdel Fattah al-Sisi will be Egypt's president after nearly a year of being the nation's de facto leader.

He won by a landslide with more than 93 percent of the vote, according to a preliminary results. His victory was so sweeping that his lone opponent, Hamdeen Sabbahy, came in third with just 3 percent of the vote. People who voided their ballots in protest outnumbered those who voted for Sabbahy.

Sabbahy was third in the 2012 presidential election as well. But that election had more than a dozen candidates and a competitive spirit. There was an extremely close runoff between the winner, Mohamed Morsi, an Islamist from the Muslim Brotherhood, and Ahmed Shafik, a holdover from the Hosni Mubarak era.

This time everything was predictable. Sisi was boosted by both state media and private media. He announced his candidacy on state television. His banners and pictures papered the streets, put up by wealthy businessman and citizens. People danced outside polling stations for him. When turnout seemed like it might be low, the Presidential Election Commission extended the voting by a day while well-known television hosts harangued Egyptians to go to the polls.

One of them, Amr Eldeeb, threatened to slit his wrists on air if people didn't go vote. Another, Tawfiq Okasha, said women who didn't vote should be shot or shoot themselves.

Democracy International, one of the largest international observation missions, issued a scathing statement about the process.

"Basically our feeling is that the political environment that exists in Egypt at this time with suppression of dissent and lack of respect for basic freedoms, including freedom of speech and freedom of association, have severely compromised the political environment and made a genuinely democratic presidential election impossible," Eric Bjornlud, the president of Democracy International, told reporters.

He added that the large security presence concerned him too. Sisi is known as the military candidate and some polling stations had huge numbers of military officers, policemen and plainclothes police.

"It's possible that that could be intimidating to some voters," he said. "One of the concerns that we had was about the role of the security forces. Though we have no evidence or even impression that security forces were interfering in the actual balloting in any substantial, widespread way."

In Egypt, Defendants Are Being Tried By The Hundreds

One of the main concerns for Sisi was the turnout. He called on 40 million Egyptians to vote for him.

A high turnout would have been an endorsement of not only his presidency, but the road map that's been put into place since Sisi overthrew the elected Morsi in a coup last July.

Since then, an unprecedented crackdown has been going on in Egypt and more than 20,000 people are languishing in jail. Human rights groups consider them to be political prisoners.

Among them is a young Egyptian-American, Mohamed Soltan, who graduated from Ohio State University. He's been on a hunger strike for more than 100 days.

There's also Ahmed Maher, a face of Egypt's 2011 uprising against Mubarak and the founder of the April 6 youth movement.

And there have been mass trials in which hundreds of people have been sentenced to death after courtroom sessions that have lasted only a day or two.

Judicial sources from the Presidential Election Commission say turnout was about 46 percent. That's some 25 million of the estimated 54 million registered voters in Egypt.

It's well below the 40 million Sisi called for and lower than the 52 percent that voted in the runoff of the 2012 election. So it chips away at claims that Sisi is Egypt's great unifier.

Bjornlund, from Democracy International, says there really is no way to double-check the turnout figures that the election commission will issue. Observers went to 1,300 polling stations. At times they were denied access, and a few never received accreditation.

But what the election did show is that Egypt is truly divided with a strong minority voice that didn't vote. Some were boycotting while others didn't bother because they already knew what the outcome would be.

"There's been a definite reassertion of authoritarianism in the last nine months. Partly that's in reaction to a genuine security threat, a terrorism threat and a growing number of attacks, especially against police and army targets since last July," says Issandr el Amrani, the North Africa project director for the International Crisis Group. "But partly it's been a crackdown that's been widening against nonviolent political dissenters, whether they're Islamist or not Islamist."

Sabbahy, the distant runner-up, said he believed the turnout numbers were boosted and in some cases votes were annulled in an effort to make Sisi's victory look all the more resounding.

"We witnessed in these elections what we consider a climate harming freedom of choice," he said.