Accessibility links
Panama's Canal Divides A Country Into Haves And Have-Nots : Parallels Panama City's skyline is full of gleaming office towers, and the economy is the fastest-growing in Latin America thanks to the canal. But the country still suffers from glaring social inequalities. 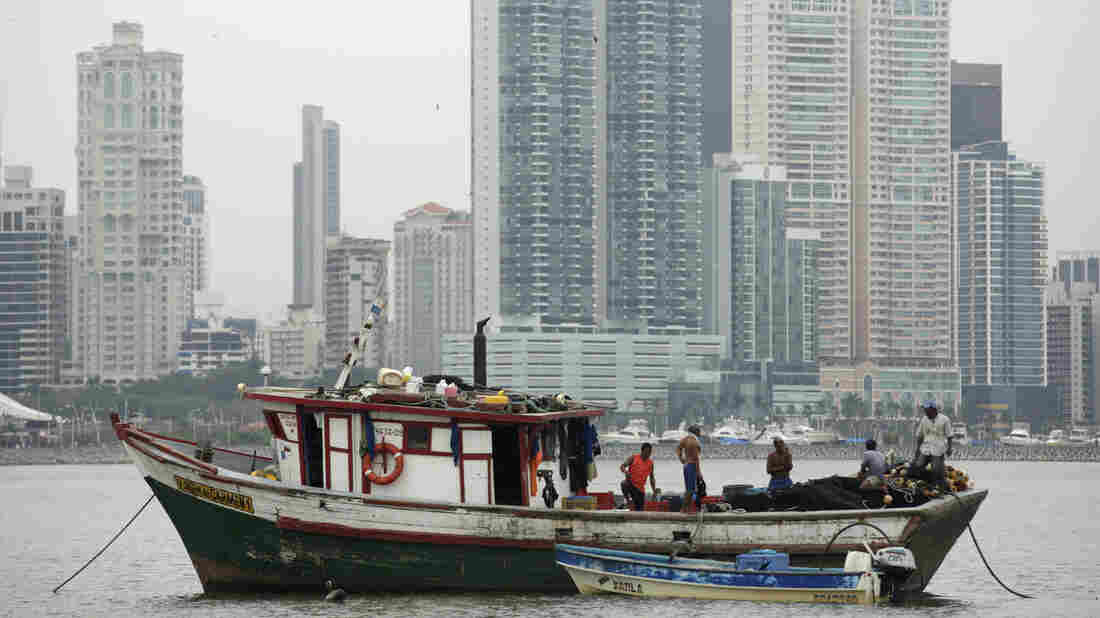 Panama has seen dramatic growth since taking over the Panama Canal in 2000 from the U.S. That prosperity can be seen in Panama City's rapidly developing skyline. However, many have not yet seen the benefits, and the country still suffers from widespread poverty. Arnulfo Franco/AP hide caption 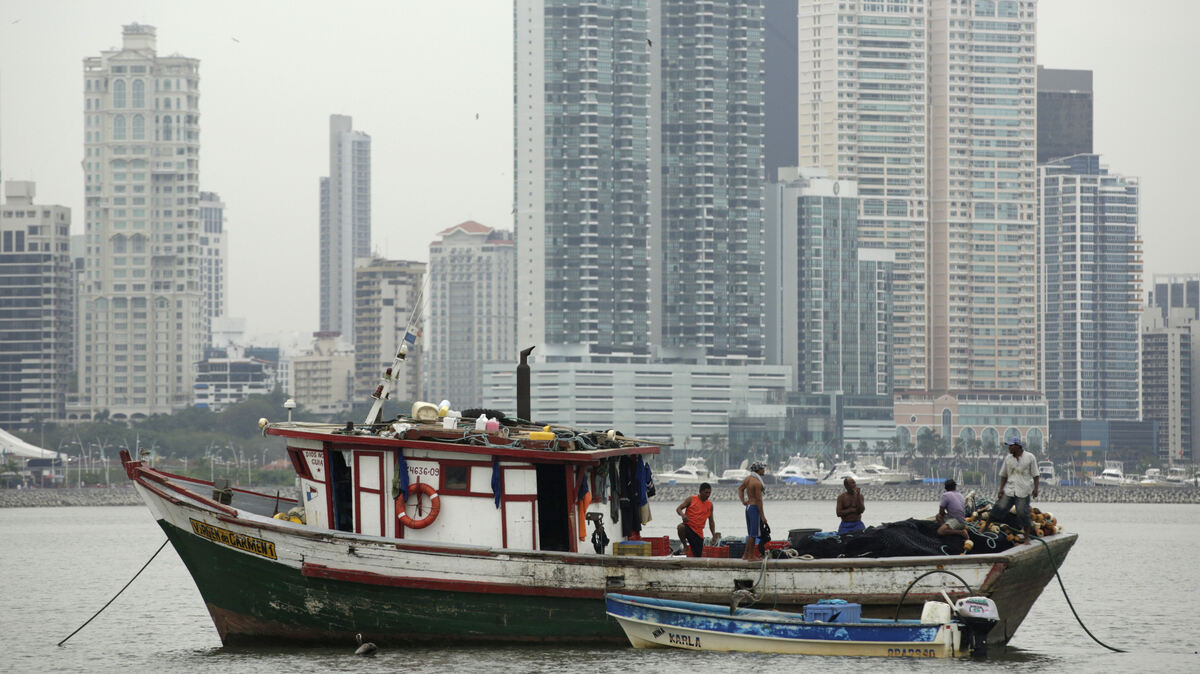 Panama has seen dramatic growth since taking over the Panama Canal in 2000 from the U.S. That prosperity can be seen in Panama City's rapidly developing skyline. However, many have not yet seen the benefits, and the country still suffers from widespread poverty.

Jorge Quijano has one of the coolest office views in the Americas: the Pacific port entrance to the Panama Canal. The panoramic vista seems to help Quijano, who heads the Panama Canal Authority, see the bigger picture.

On the one hand, Quijano understands why Panama has run the canal so effectively since the United States handed it over in 2000.

"When the United States built the canal, it was treated like a noncommercial utility, like a water filtration plant," Quijano said in an interview at his Panama City headquarters. "We're running it as a business."

One that's expected to rack up revenues of more than $2.5 billion in 2014, and which moves 330 million tons of cargo in and out of the Western Hemisphere each year.

But Quijano, while stressing that he's an engineer and not a politician, also concedes that more Panamanians need to see more of that wealth.

For starters, he says, "Panama has to strengthen its education," which is rated among the world's worst. "There's so much investment coming into Panama now, but if we don't have [trained] people, those investments will go elsewhere."

This year marks the Panama Canal's 100th anniversary. Panama is nearing completion of a more than $5 billion expansion of the waterway, and it recently elected a new president, Juan Carlos Varela. There has never been a more critical moment for the country to see the bigger picture Quijano warns about.

If Panama doesn't start addressing the inequality that keeps almost 40 percent of its population in poverty it may well threaten to turn the boom into bust.

To Panamanians, what the U.S. did in handing ownership of the Panama Canal to Panama is as important as the maritime marvel the U.S. built in 1914.

And Panama has made the most of it. In the past five years, its economy has grown faster than any in Latin America. Panama City has a new subway. Its waterfront skyline now sports the region's tallest skyscraper, the Trump Ocean Club.

In fact, Panama today rivals South Florida as a prime shopping destination for many in Latin America. 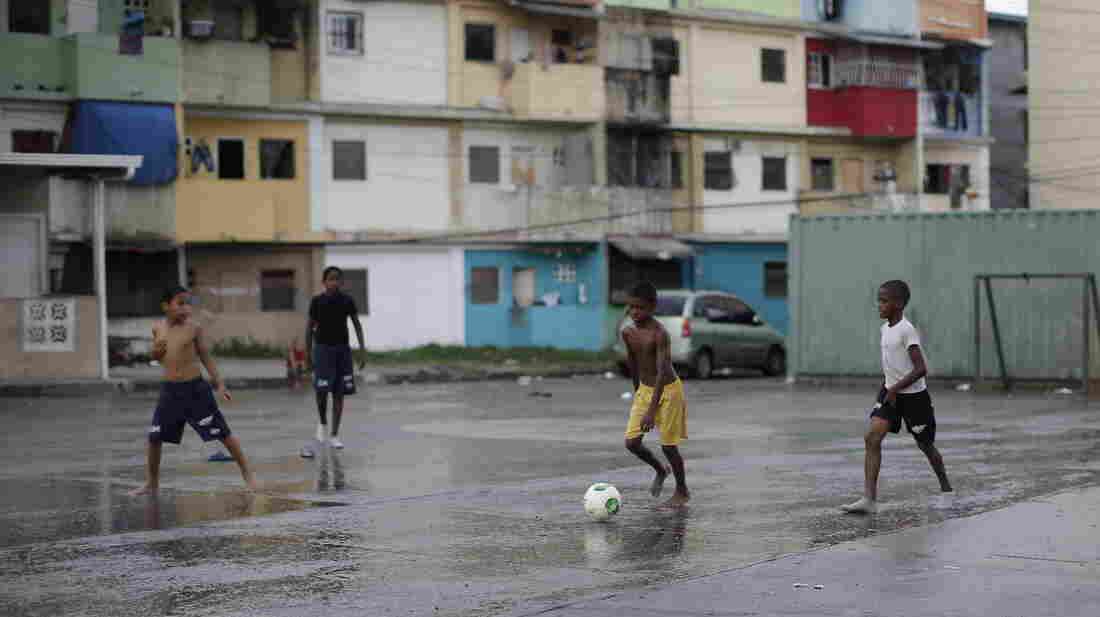 Children in a poor Panama City neighborhood play soccer on May 14. The Panama Canal has brought rapid development to the capital in recent years, but 40 percent of the country's residents still live in poverty. Mauricio Valenzuela/Xinhua/Landov hide caption 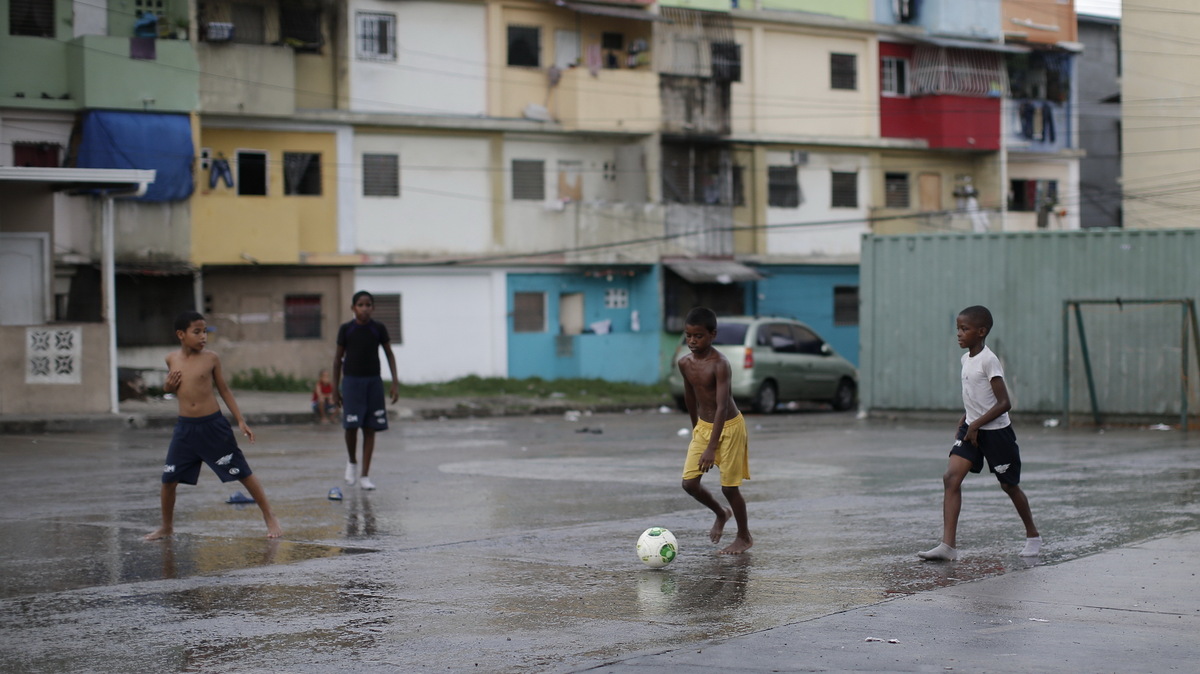 Children in a poor Panama City neighborhood play soccer on May 14. The Panama Canal has brought rapid development to the capital in recent years, but 40 percent of the country's residents still live in poverty.

"When you go to Miami, you will see a lot of people with luggage in the malls buying things," says Carlos Urriola, executive vice president of the Manzanillo International Terminal (MIT) next to the canal's Caribbean entrance. "Today you see this in Panama."

The MIT, now one of Latin America's largest ports, handles 20 times more freight than it did in 2000.

"It's amazing," says Urriola, "that a small country of 3.5 million people has so much influence in what happens to world commerce."

Many Haven't Seen The Benefits

Yet it's just as astonishing that so few of those 3.5 million seem to feel the benefits — especially Panama's youth. More than half the country's children are poor, and almost a fifth suffer malnutrition.

"All that canal wealth isn't getting to poor people or the barrios," Córdoba says inside her tiny walk-up apartment while feeding her four young children a lunch of pasta and ketchup. "It's not coming to anyone's rescue here."

The canal expansion will accommodate more massive vessels known as Post-Panamax ships, and it should almost double the canal's revenues over the next decade.

Panama hopes the project will also propel its bid to become the Hong Kong of the Americas, a global maritime and financial hub. Quijano believes Panama is already "the gateway for Latin America and even the United States."

But can that stature really last long and meaningfully if Panama doesn't also narrow the chasm between rich and poor? Between, especially, a Panama City-based white elite known as los rabiblancos and black Panamanians in communities like Colón.

That port city, Panama's second-largest, sits next to the canal's Caribbean entrance. But it has been largely left out of Panama's prosperity. Unemployment there is about 50 percent, and in recent years the frustrations have boiled over into deadly street protests.

Roberto Darkins has taken part in some of those demonstrations. He sells clothing — some of it he proudly shows off as his own brand, Que Jeans — on Colón's main street. But he laughs when someone mentions Panama as a banking center, given how hard he says it is for small businesses to get even microloans.

Darkins also scoffs at Panama's celebrated building boom, which he says has made housing less affordable for families like him, his wife and four children, who share a one-bedroom apartment on the eighth floor (no elevator) of a decaying 19th century building.

He also says he fears Panama's notoriously corrupt political system will devour the fruits of the canal expansion: "The more money you make, the more corruption they're gonna do."

Consider a legal case that played out recently in Panama:

The dispute involved a deceased U.S. millionaire who'd left $50 million in his will to a trust for impoverished Panamanian children.

His rabiblanca Panamanian widow and her children fought to annul the will so the money would go to them instead. Panama's lower courts ruled the will valid — but the widow and her kids got the Supreme Court, whose corruption has been a target of U.S. State Department complaints, to overturn them.

That's a big part of Panama's bigger picture. And it will still be right outside everyone's window when the bigger canal locks open next year.

Tim Padgett is based in Miami with WLRN. You can read more of his coverage here.