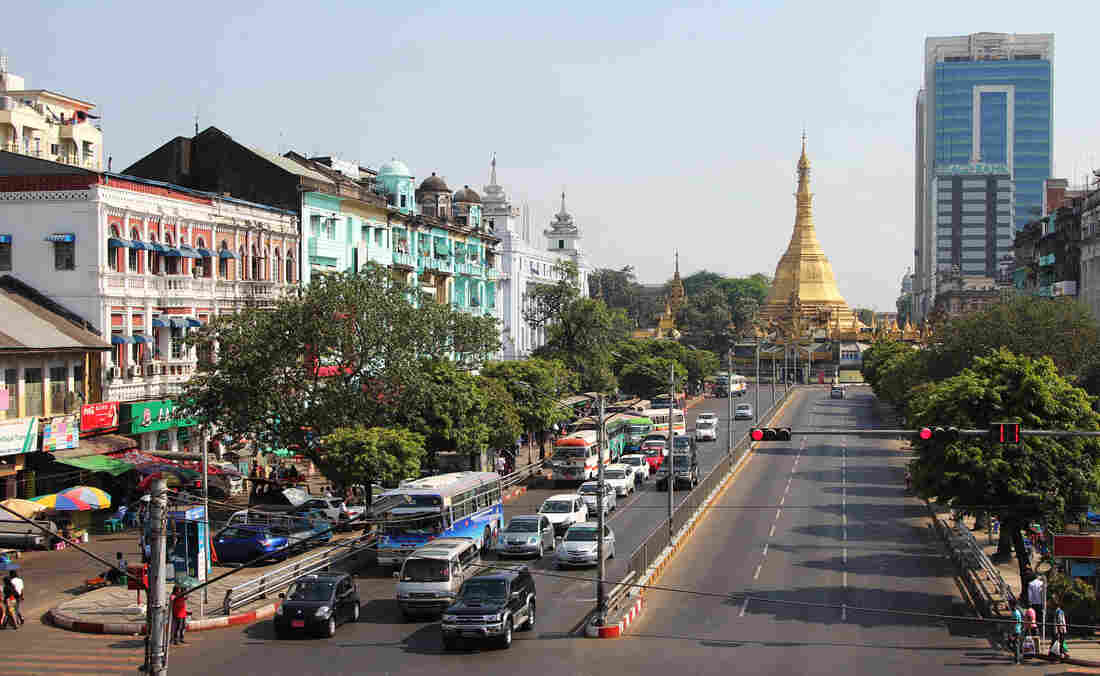 At the center of Yangon, the city's colonial heritage, Buddhist faith and emerging modern face are visible in a single block. Frank Langfitt/NPR hide caption 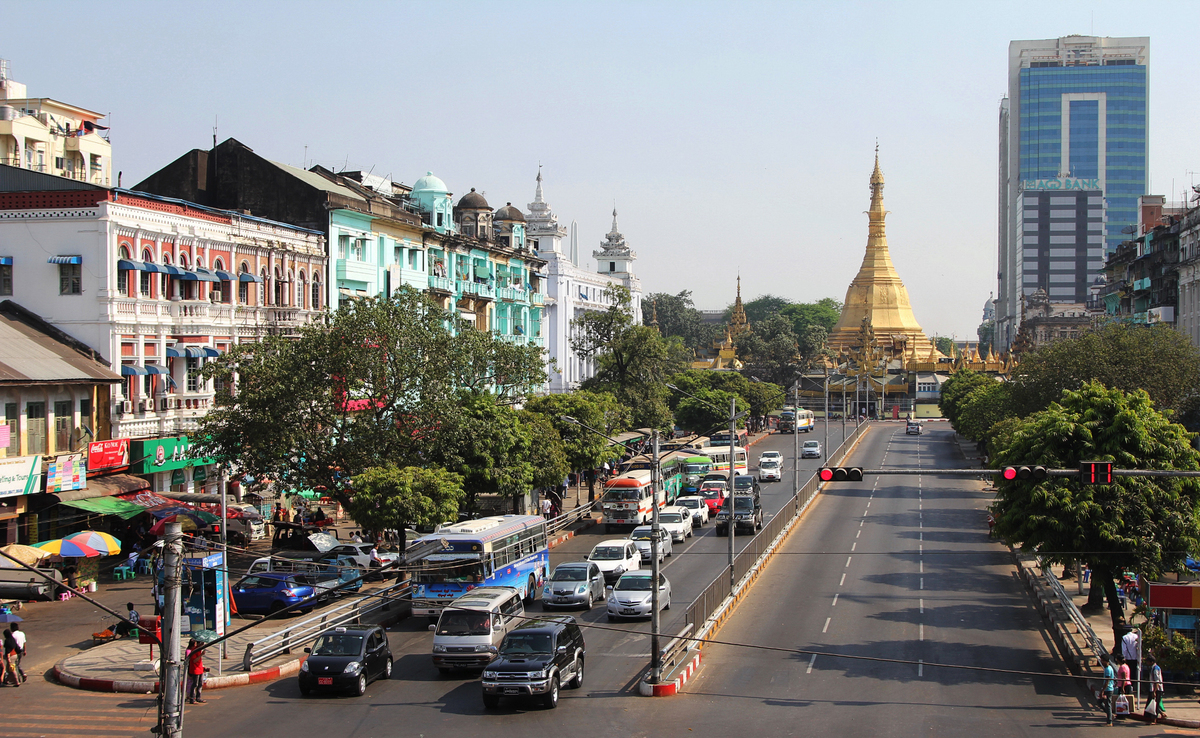 At the center of Yangon, the city's colonial heritage, Buddhist faith and emerging modern face are visible in a single block.

Decades of socialism and military rule kept Myanmar — or Burma, as it was known — poor and isolated.

There was one upside, though. The economy was so lousy, there was no drive to demolish the big British colonial buildings in Yangon, Myanmar's largest city, and replace them with the glass and steel towers that now define much of the skylines in East Asia. 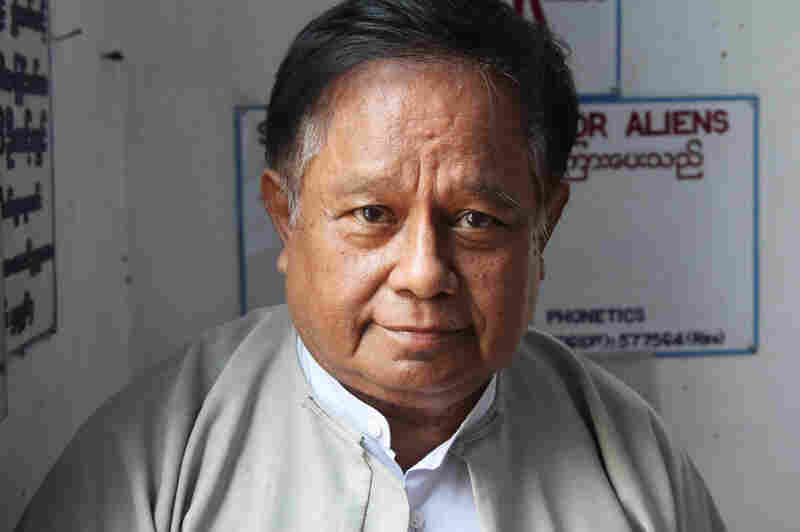 Tint Lwin teaches English in Yangon's colonial urban core. He worries that the building where he works, which dates to 1906, could fall apart if it isn't repaired in the next few years. Frank Langfitt/NPR hide caption

Myanmar has opened up its political system, improved its relationship with the West and ushered in a real estate boom in the past several years. That's mostly good news for Yangon, but not for its remarkable architectural heritage, which has come into the cross hairs of developers trying to cash in on rising land prices.

"These buildings are priceless," says Tint Lwin, who has taught English in a colonial-era building along the city's Pansodan Street for more than three decades. The building, constructed by a Baghdadi Jewish trader around 1906, has ocher-colored walls and Corinthian columns.

Tint Lwin loves the atmosphere of the neighborhood, but worries it won't last. A modern mid-rise is going up across the road. The walls in his building are pitted with black mold, and rain has saturated some ceilings, leaving gaping holes.

"I feel very unhappy because of the negligence," says Tint Lwin, who, like most Burmese men, wears a longyi, a traditional wraparound skirt. He says if the building's roof isn't fixed properly, "the rain will leak and destroy the whole structure."

The British, who ruled Burma for decades, constructed most of these buildings in their own image. But Tint Lwin doesn't see them as symbols of oppression; he sees them as part of Myanmar's heritage.

"You can't be xenophobic," he says, echoing the pragmatism of many here. "These are our assets. This British architecture is a unique one. Almost all in Myanmar like these buildings." 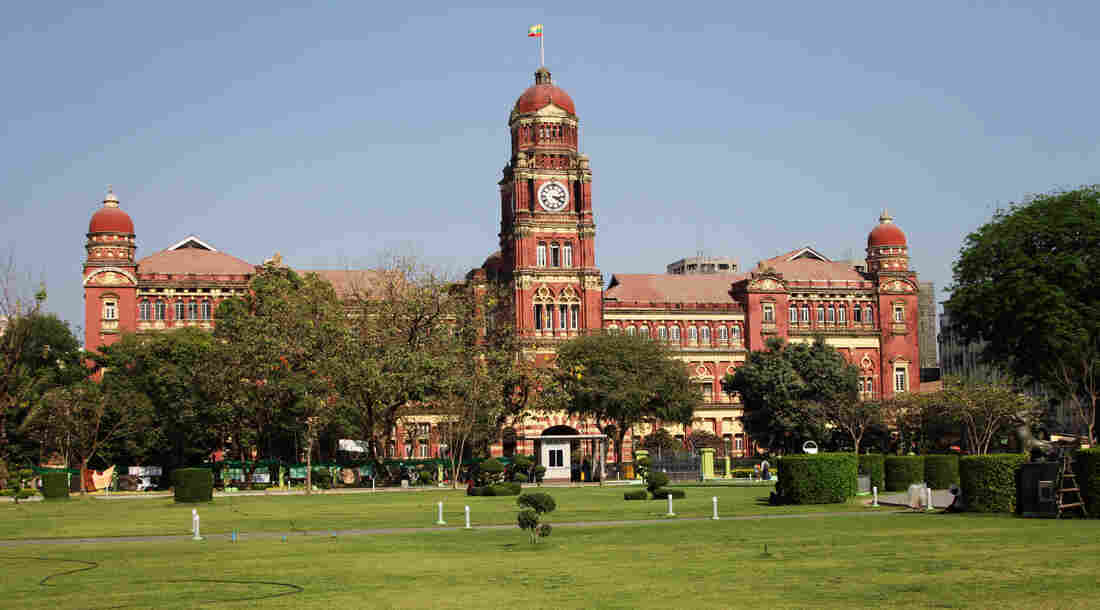 Yangon's Queen Anne-style High Court was partly abandoned when the government of Myanmar moved the capital to Naypyidaw in 2005. Frank Langfitt/NPR hide caption

That includes Maung Nyan, a 19-year-old punk rocker, who lives on the building's fourth floor. He's sitting on the floor of his apartment, wearing a black My Chemical Romance T-shirt and playing the Ramones' "I Want to Be Sedated" on an electric guitar. Maung Nyan is rebellious by Burmese standards, but when it comes to construction, he's a traditionalist.

"Because of the valuable architecture, I prefer this kind of old building to new buildings," says Maung Nyan, whose apartment is really a cagelike, cavernous stall with a wire-mesh door. "I'm also proud to live here. If it's possible, I'd like to stay here until I die." 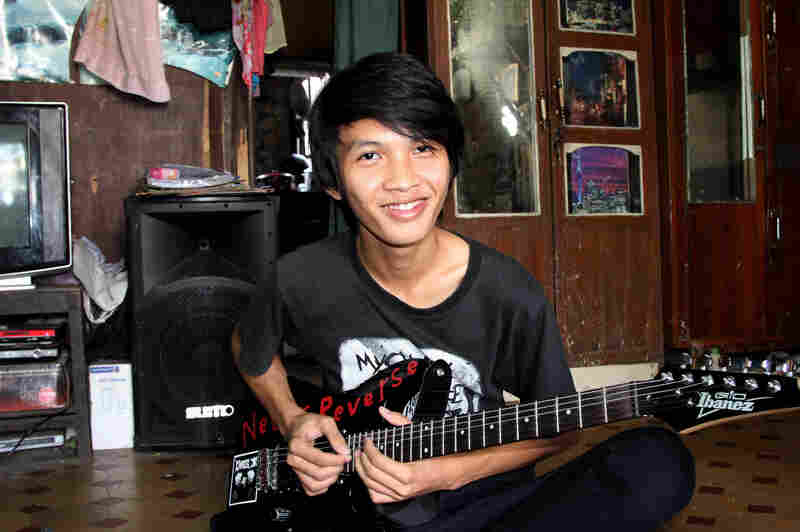 Yangon is a rarity in a part of the world where breakneck growth has transformed skylines within a generation. Earlier economic booms led to the destruction of most colonial-era buildings in cities like Hong Kong and Singapore in favor of modern office and apartment towers. In Hong Kong, for instance, a forest of glass and steel has risen around the old domed Legislative Council building, such that the one-time colonial icon is now hard to spot.

"Yangon has captured a sense of time that has been lost in Singapore and Hong Kong," says Ian Morley, an assistant professor in the history department at Chinese University of Hong Kong. "You have this downtown environment, which is relatively intact. It's got a sense of historical integrity as it was built from the late 1800s and early 1900s."

But there is no guarantee it will last. In recent years, soaring real estate prices have also driven the destruction of scores of old buildings in Yangon. That's why historian and best-selling author Thant Myint-U founded the Yangon Heritage Trust in 2012 with other preservationists.

"The reason I got involved in this issue is because I saw some of these buildings were being knocked down for really no reason," says Thant Myint-U. "A developer, who could easily have built something a few blocks down, decided to knock down an old building because there was no sense of the value of these buildings."

The Yangon Trust is working with the government to develop a zoning plan — the city didn't have one — and designate more buildings for protection. But preservation costs a lot of money. So, Thant Myint-U says, the city needs to tap private investment and turn old buildings into moneymakers such as hotels, museums and restaurants. 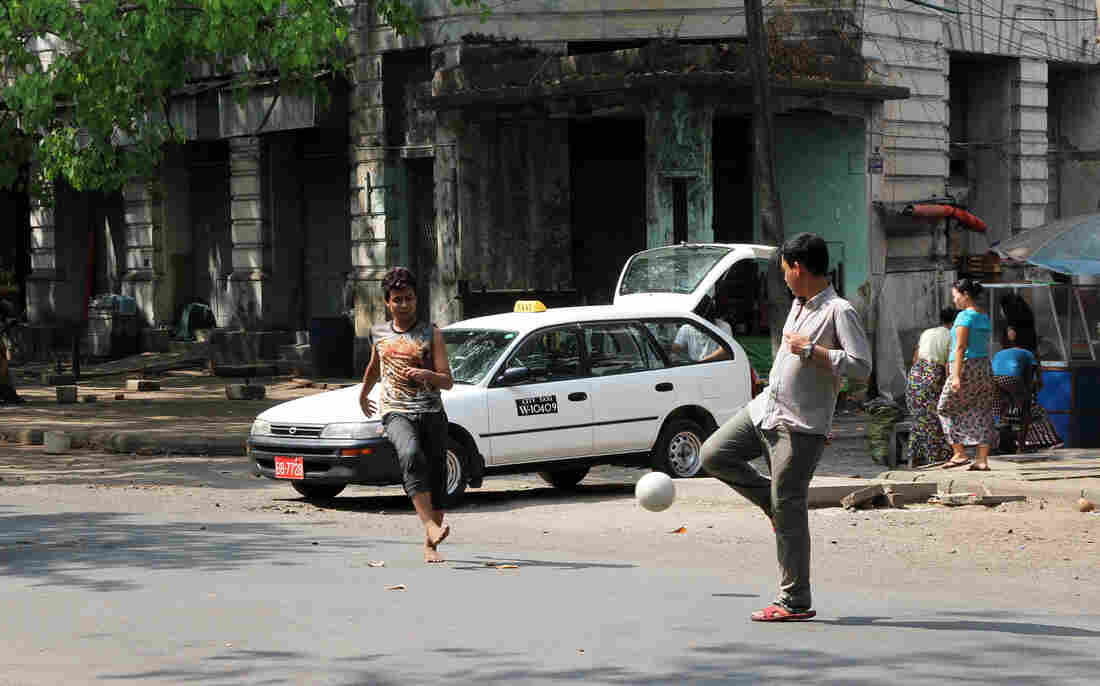 Yangon's colonial heart has a vibrant street life – unlike some of the tourist districts in other East Asian countries. Frank Langfitt/NPR hide caption

That's what the owners of Gekko are doing. The Japanese restaurant opened in March in the same building where Maung Nyan, the punk rocker, lives. After decades of neglect, the restaurant's renovation required a lot of work. When, for the first time, co-owner Nico Elliott opened the back door onto an interior courtyard, the scene was disgusting.

"We were up to about there, a meter and a half high, in sewage," says Elliott, pointing to a spot partway up a wall. There was also, he says, "a large colony of rats running around." 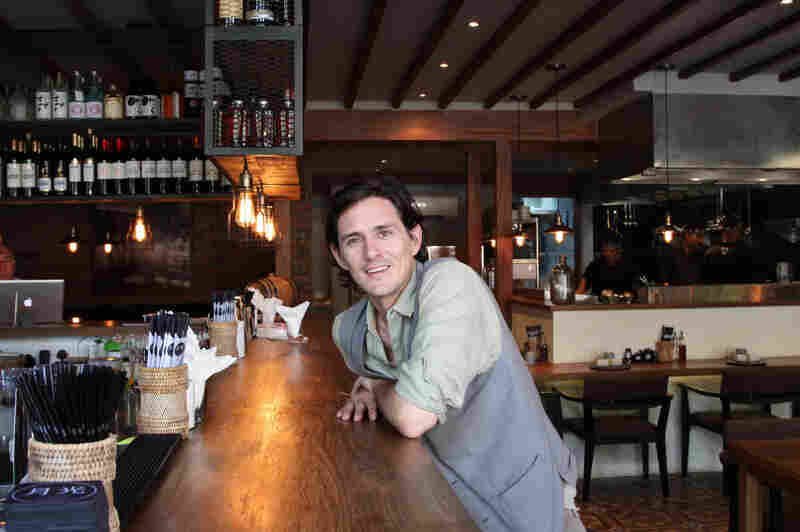 Nico Elliott opened Gekko, a Japanese restaurant, in this renovated space in a century-old building. The renovation cost more than $300,000, but Elliott says investors can turn a profit if they're willing to spend upfront. Frank Langfitt/NPR hide caption

Elliott and his partners sunk more than $300,000 into the place. He says the government approval was time-consuming and focused on fees.

"They weren't really interested in what we were doing," says Elliott, 34, who is from the United Kingdom. "It seemed they were more interested in how much cash was coming their way."

The result, though, resembles an upper-end restaurant you'd find in London or New York, with exposed brick and preserved colonial touches, such as the century-old exposed I-beams from Scotland.

Both labor costs and rent in these dilapidated buildings are low. So, Elliott says, a well-run business can make a profit margin of more than 30 percent, which would be considered terrific anywhere.

"I hope these kinds of projects are the beginning of more people coming in and realizing that spending a little bit more than you'd spend on a new build is worthwhile to actually preserve something and sustain this place and these buildings," he says.

Some people in Yangon have opposed renovation projects on historical grounds, including hundreds of lawyers who staged a protest in 2012 to oppose turning an abandoned courthouse into a luxury hotel. Others instinctively distrust any deal between the government and private business because of a long history of corruption and cronyism. And some residents actually want their buildings knocked down so they can get new, modern apartments. 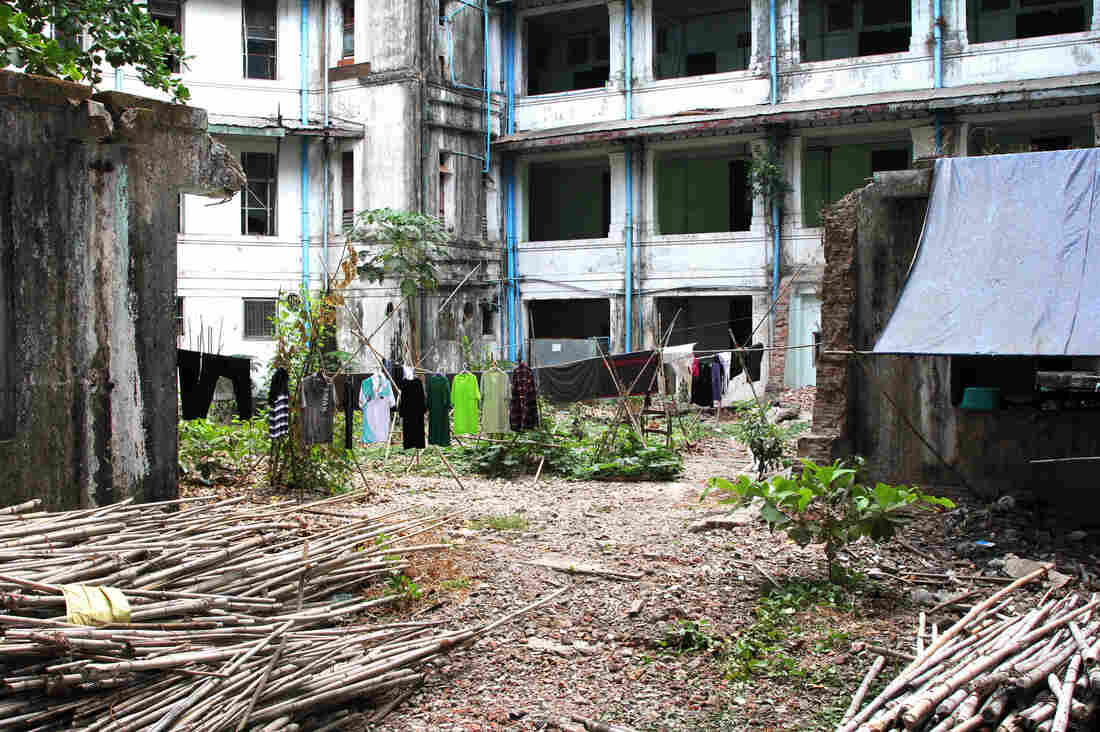 Thant Myint-U of the Yangon Heritage Trust says the city has to enact zoning and conservation laws this year to protect buildings — even in the face of developer opposition.