Accessibility links
The Thai Protest That's Straight From 'The Hunger Games' : Parallels The silent, three-finger salute from the smash movie and book series has been catching fire among demonstrators in a country where the military has banned most every form of protest. 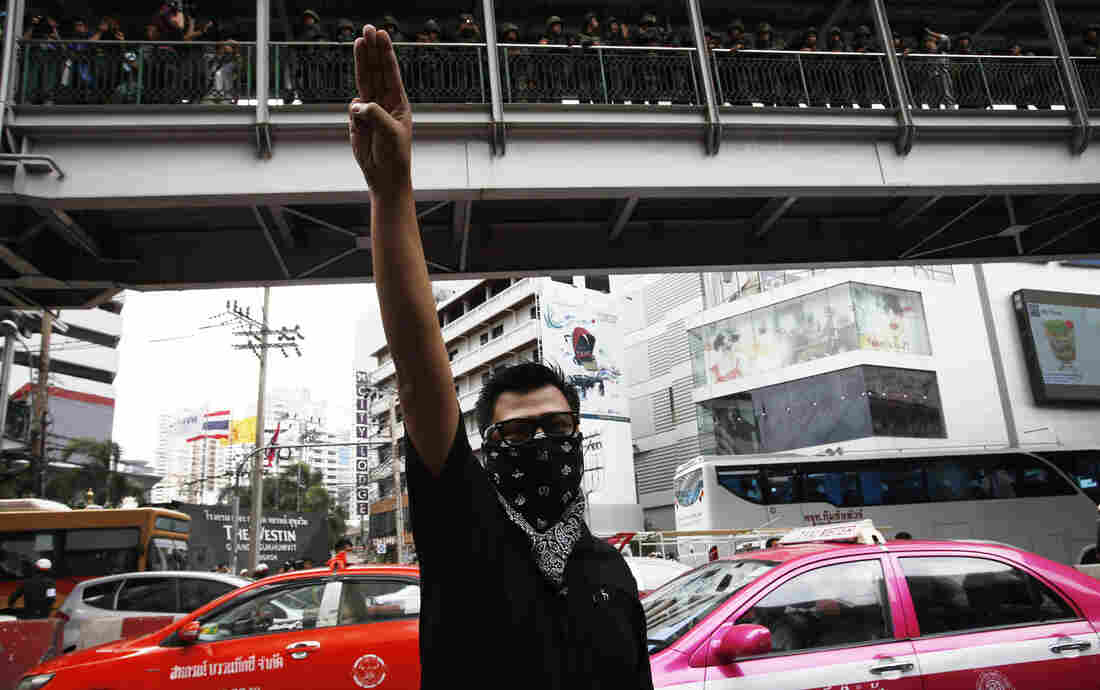 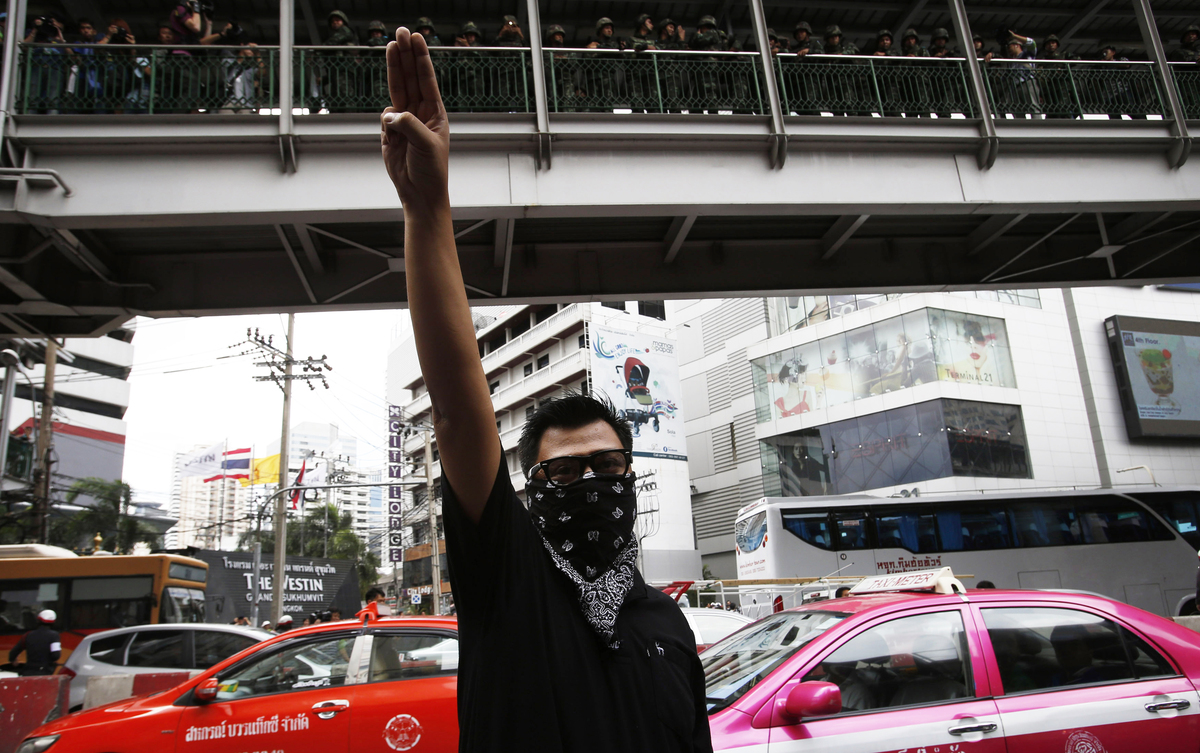 Opponents of last month's coup in Thailand have adopted the three-finger salute from The Hunger Games movies and books as their symbol of resistance to the military takeover. The protests so far have been relatively small. But they seem to be, well, catching fire.

Photos of protesters defiantly flashing the salute have been circulating widely on social media. The military, meanwhile, has been flooding the streets in an attempt to discourage any large-scale demonstrations.

The protesters have countered with flash mobs of no more than a hundred people that show up where the army isn't — and then disperse once they arrive. Organizer Sombat Boonngam-anong has used his Facebook page to encourage people to ramp up their campaign to three times a day in places where the security forces aren't. 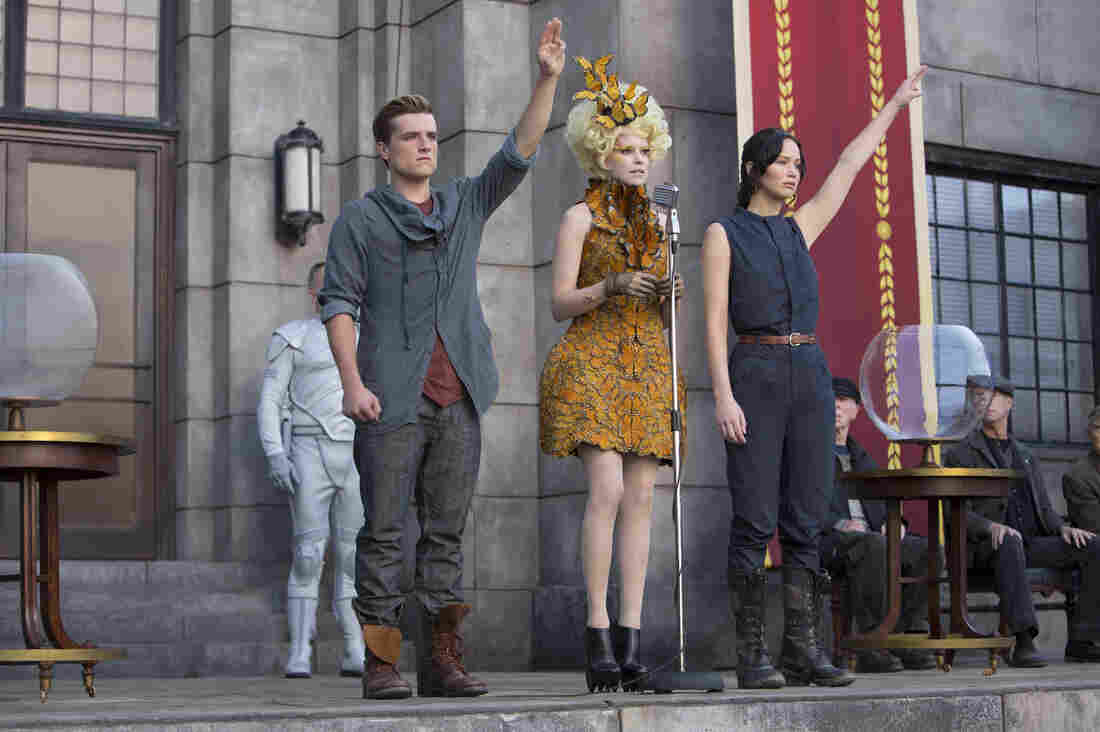 Actors Josh Hutcherson as Peeta Mellark (left), Elizabeth Banks as Effie Trinket and Jennifer Lawrence as Katniss Everdeen in a scene from the film The Hunger Games: Catching Fire. A fictional gesture from the Hollywood movie is being used as a real symbol of resistance in Thailand. Murray Close/Lionsgate/AP hide caption 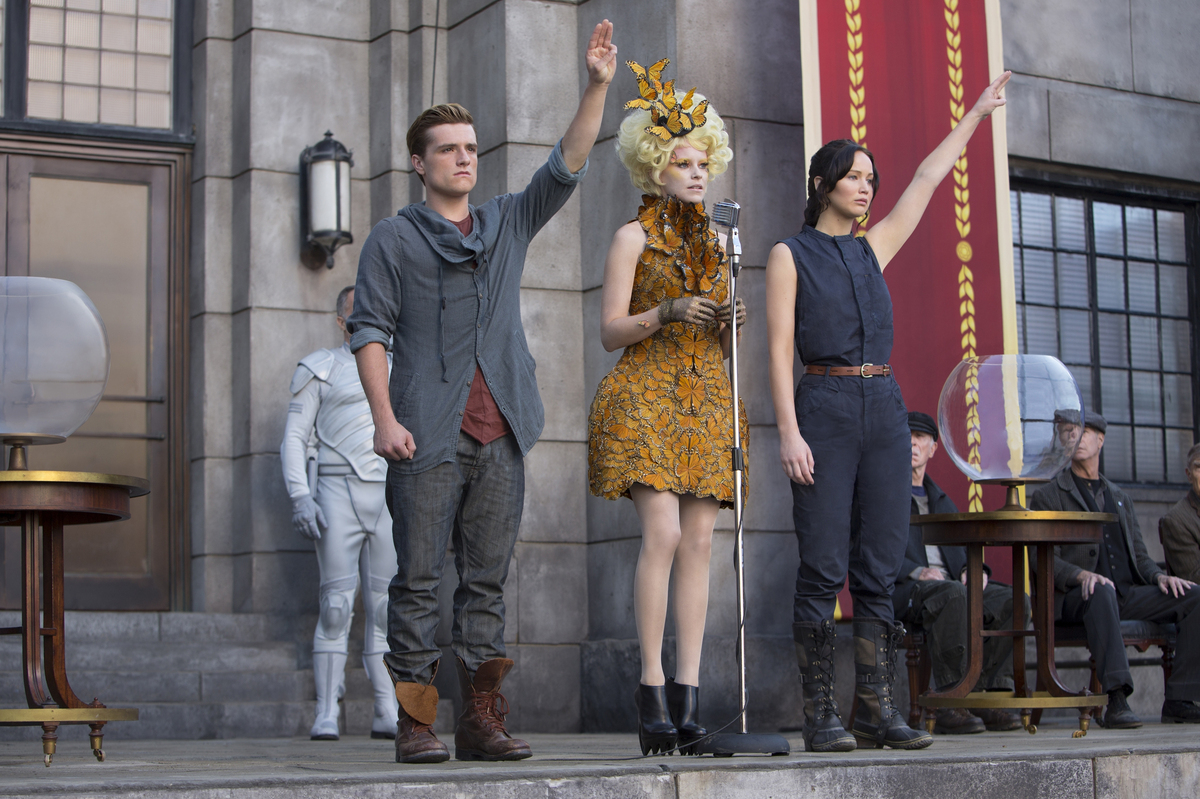 Actors Josh Hutcherson as Peeta Mellark (left), Elizabeth Banks as Effie Trinket and Jennifer Lawrence as Katniss Everdeen in a scene from the film The Hunger Games: Catching Fire. A fictional gesture from the Hollywood movie is being used as a real symbol of resistance in Thailand.

"We are monitoring those who use this signal but have no plans to ban it yet," Winthai Suvaree, a spokesman for the military rulers, told Reuters. "But if there are gatherings of five people or more doing this salute, then we will make arrests in some cases."

One of those arrests apparently already occurred on Sunday. A dramatic video that's gone viral shows alleged plainclothes police bundling a woman into a car after she flashed the sign at one of Sunday's anti-coup protests.

In an op-ed in Tuesday's Bangkok Post, Atiya Achakulwisut suggested this reaction from the military was likely to help spread this form of protest.

"The power of a symbol or symbolic gesture lies in its ability to inspire a kindred spirit. That ability hinges on how the coup makers choose react to it. Suppression is sure to augment its power and cause resistance to multiply."

The best thing coup leader Gen. Prayuth Chan-ocha can do right now, she warned, is nothing.

"Right now, there is no film screen heroine Katniss Everdeen to lead the anti-coup crowd. The military does not want to quell the movement to the point that one is produced. It has seen how former prime minister Yingluck Shinawatra could lead her party to election victory in less than 50 days. It does not want to see 'a girl on fire' leading the protests."

Bootleg DVDs of the Hunger Games movies can be bought on the street for about $5. Authorities are cracking down on the grounds that they want to stop counterfeiting. But it's the dissent they want to squash.

Thailand's Military Ruler Says No Elections For At Least A Year

Army leaders said the coup was necessary in order to "reform" the country's political system and keep Thailand from sliding into chaos. It marked the 12th military coup, not to mention multiple attempted coups, since Thailand became a constitutional monarchy in 1932.

The constitution has been scrapped, parliament dismissed and many opposition-friendly broadcast stations and newspapers shut down. And the military continues its campaign to stifle dissent by detaining hundreds of politicians, academics, activists and journalists. This is especially true in the north and east of the country, where supporters of the elected government, the so-called red shirts, are concentrated.

"I think most of the rural population in red-shirt country is uneasily acquiescing — watching and waiting," said Dr. Paul Chambers, director of research at the Institute of Southeast Asian Affairs in the northern city of Chiang Mai. "I expect, eventually, more demonstrations."

Chambers says the military should realize this isn't 2006, which was the last time the military staged a coup, deposing the democratically elected Prime Minister Thaksin Shinawatra, the brother of the recently deposed Yingluck. 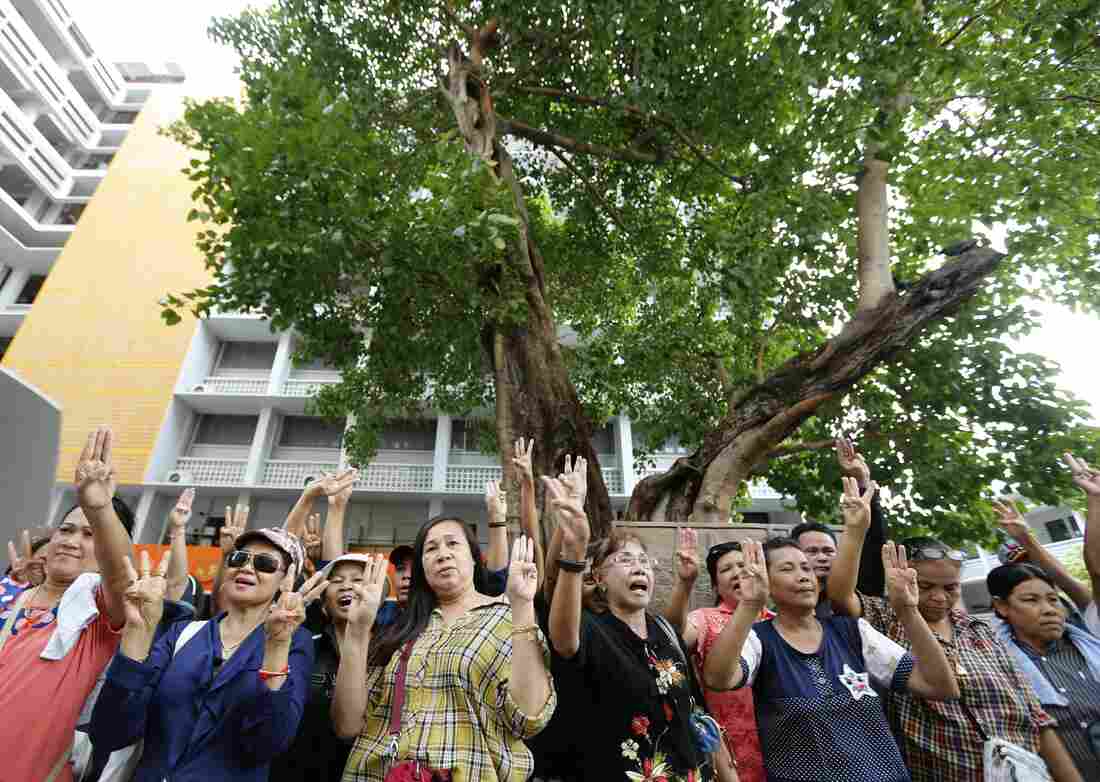 Thai protesters demonstrate during an anti-coup rally at Thammasat University in Bangkok on Sunday. At least two protesters were arrested as thousands of soldiers and police were deployed in Bangkok to thwart sporadic protests against the May 22 coup. Narong Sangnak/EPA/Landov hide caption

Thaksin, a billionaire who made his fortune in telecommunications, is a man the Bangkok elite see as corrupt and a political cancer. But many rural voters in the north and northeast still see him as a benefactor. They feel his populist policies of low-cost health care and easy credit made their lives significantly better.

"Unlike 2006, the military is dealing with a sizable and organized potential resistance. But many soldiers may prefer repression. The Thai military has to walk gingerly in the north and northeast to be successful," he added.

Hanging over all this is the question of royal succession. Thailand's revered King Bhumipol Adulyadej is 86, in failing health, and there is widespread uncertainty about what happens after he passes from the scene.

Coup leader Prayuth Chan-ocha, who has named himself interim prime minister, has said new elections could be held in the next year and a half, if the country is "stable" enough to permit them. That's a big if.