Accessibility links
Riding 'The Beast' Across Mexico To The U.S. Border : Parallels As many as a half-million undocumented immigrants, including more and more children, make dangerous 1,450-mile trips atop this network of freight trains each year. 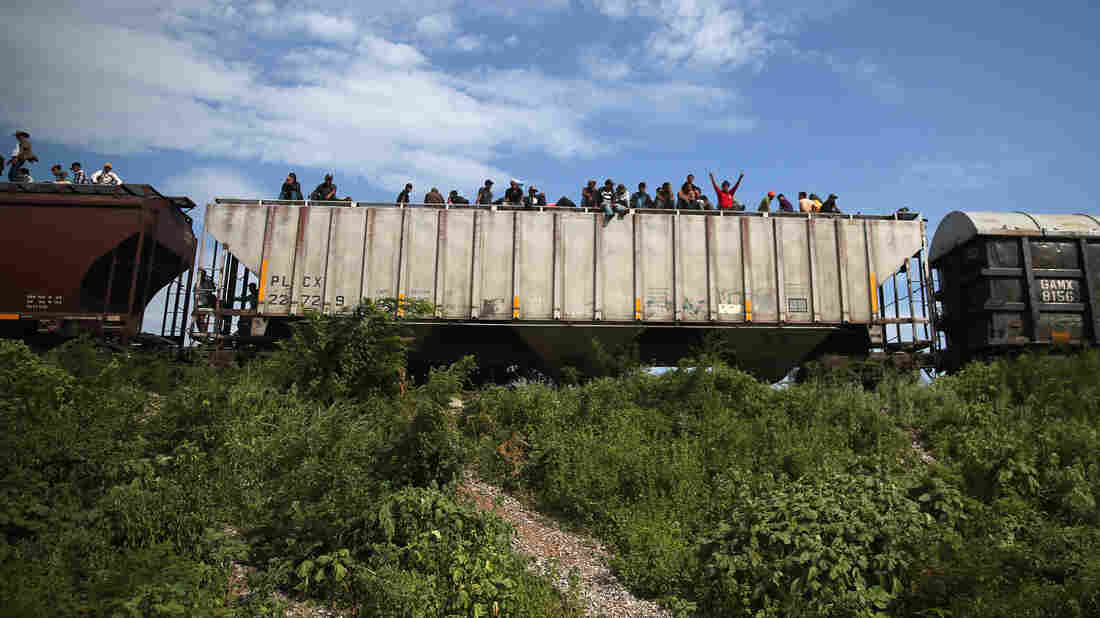 Migrants arrive at a rest stop in Ixtepec, Mexico, after a 15-hour ride atop a freight train headed north toward the U.S. border on Aug. 4. Thousands of migrants ride atop the trains, known as La Bestia, or The Beast, during their long and perilous journey through Mexico to the U.S. John Moore/Getty Images hide caption 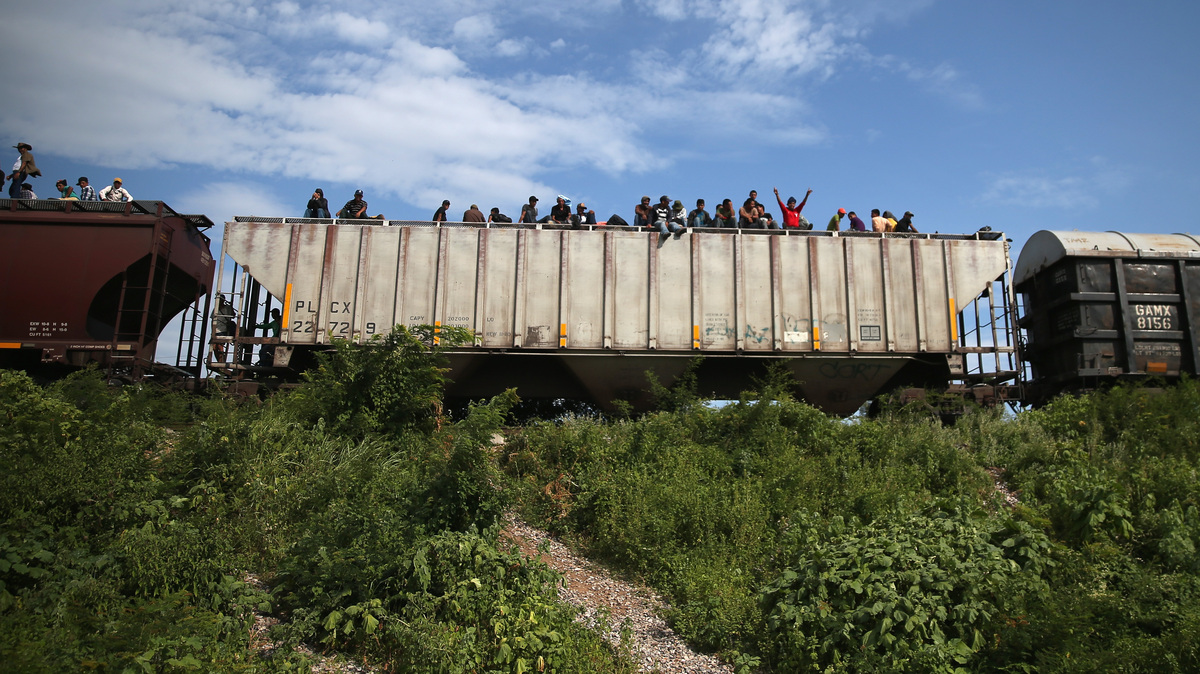 Migrants arrive at a rest stop in Ixtepec, Mexico, after a 15-hour ride atop a freight train headed north toward the U.S. border on Aug. 4. Thousands of migrants ride atop the trains, known as La Bestia, or The Beast, during their long and perilous journey through Mexico to the U.S.

There's a network of freight trains that runs the length of Mexico, from its southernmost border with Guatemala north to the United States. In addition to grain, corn or scrap metal, these trains are carrying an increasing number of undocumented immigrants whose aim is to cross into the U.S.

And despite the many deadly challenges it poses, more and more children — both with adults and alone — have been making the risky journey. That prompted President Obama this week to warn of "an urgent humanitarian situation."

These aren't passenger trains; there are no panoramic windows, seats or even a roof to guard from sun or rain. People call the train La Bestia, or The Beast. Some call it the Death Train.

It's estimated that up to a half-million migrants now ride The Beast each year, sitting back-to-back along the spine of the train cars, trying not to get knocked off their rooftop perch.

"They're just packed," says photojournalist Keith Dannemiller, who has lived in Mexico for the better part of three decades. "There's not much room for anyone else to get on board by the time the train pulls out."

For the International Organization for Migration, he recently documented the exploding number of migrants riding these trains — more and more of whom end up in South Florida these days.

Journeys on the train can take anywhere from a week to several months, and many migrants have made this trip more than once. 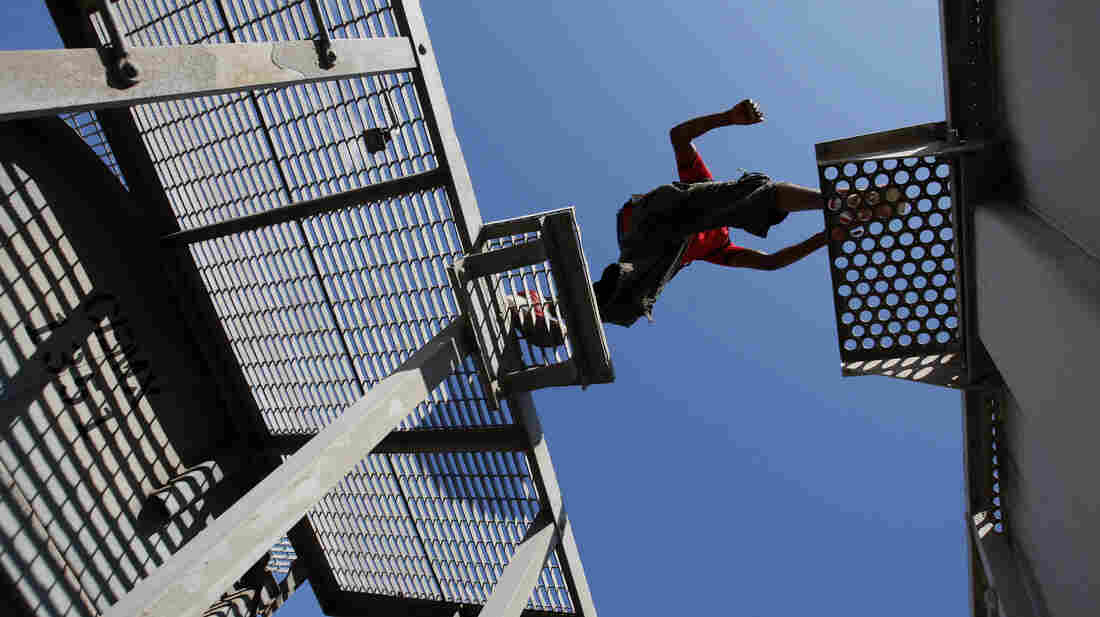 A Central American migrant jumps between cars on a freight train in Mexico's Chiapas state in 2013 during the journey north. Jorge Luis Plata/Reuters/Landov hide caption 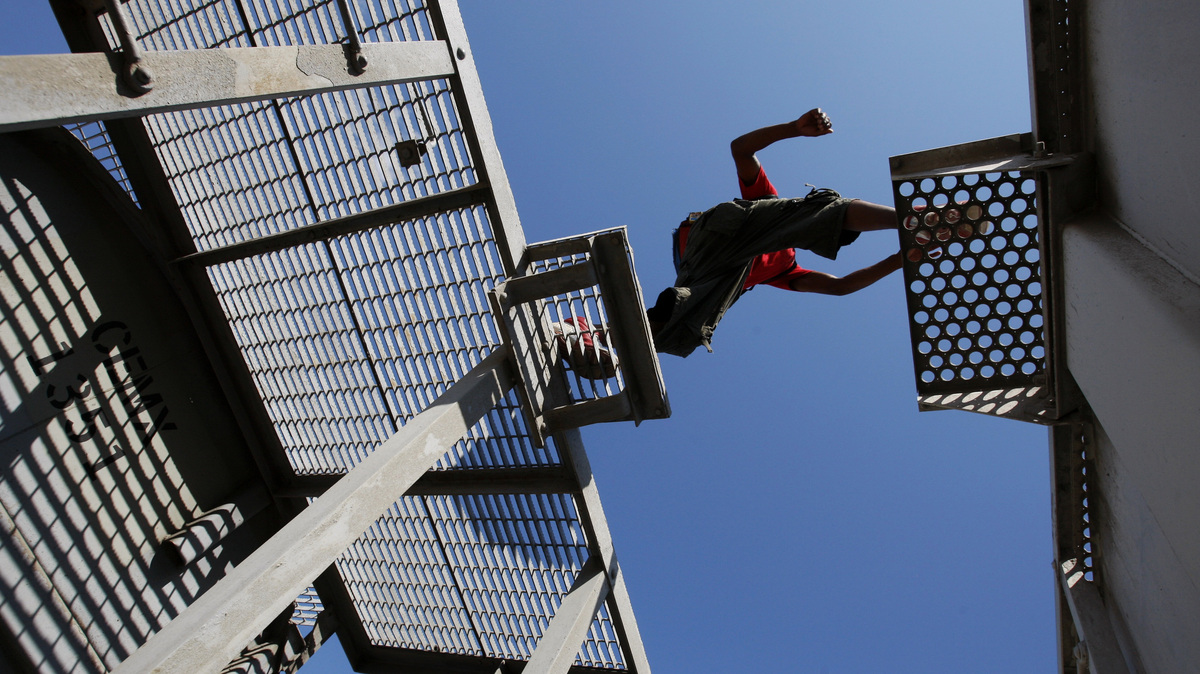 A Central American migrant jumps between cars on a freight train in Mexico's Chiapas state in 2013 during the journey north.

Lis-Marie Alvarado, who lives in the Miami suburb of Homestead, rode The Beast last year as part of the Al Jazeera America TV series "Borderland." She and five other Americans traced the journey of immigrants who died while making their way to America.

"It's tiring being on top of there," says Alvarado. "Not only with the sun, but also the water. There's very limited water, and that's a constant, you know."

Alvarado is herself an immigrant from Nicaragua and the only U.S. citizen in her family.

"People are taking the journey because you do want a better future and you're willing to do whatever takes," Alvarado says. "There are a lot of people who aren't going to make it."

Many Beast riders have suffered physical injury or death falling off the train or getting sucked into the wheels trying to board it in motion. In some areas, that's the only way on.

Who Takes The Journey

Most of those making this 1,450-mile trek are not from Mexico. They come from Central American countries like Guatemala, El Salvador and Honduras, which has the world's highest murder rate.

One of the things that struck Dannemiller while documenting the Beast was just how many kids were riding the train.

Instead of being helped onto merry-go-round horses, kids from these countries are hoisted onto the back of this train that's just as likely to spit them out as it is to shepherd them safely to the border.

"A lot of the people are not fleeing because of economic hardship," says Dannemiller. "A lot of them are fleeing because the increase in the drug violence and threats, extortion, and that's a different phenomenon. Before, you could call these people migrants with no problem. I think now, the term refugee might be a little bit more apropos for who these people are and what they're going through."

Cause Of The Influx

Some attribute this crisis — the reason people are willing to risk their lives on a train like The Beast — to the United States. Genevieve Wood articulated this in her most recent installment on The Daily Signal, an online publication from the Heritage Foundation, a conservative think tank.

"The fact that the United States is having a debate over immigration," says Wood, "and [because] it appears to many people that amnesty will be a part of any immigration reform, many people believe, 'If we can just get into the country, if we can get there and live there illegally, eventually we're going to be given legal status.' "

She believes it is that illusion — sometimes fatal — that drives people to make this journey to the U.S.

Alvarado rejects this idea. She believes those making the journey, even the kids, don't wear rose-colored glasses as they board the train. They know the dangers, the odds, and the possibility of being deported later, even if they make it across the border.

"The fact [is], people are willing to die to escape something that's terrible."

You can read more of WLRN's Latin America coverage here.