Accessibility links
How A Lack Of Toilets Puts India's Women At Risk Of Assault : Parallels The rape and lynching of two girls has caused an uproar and focused attention on sexual assaults. A lack of toilets forces women and girls to go outside at night, where they are vulnerable to attack. 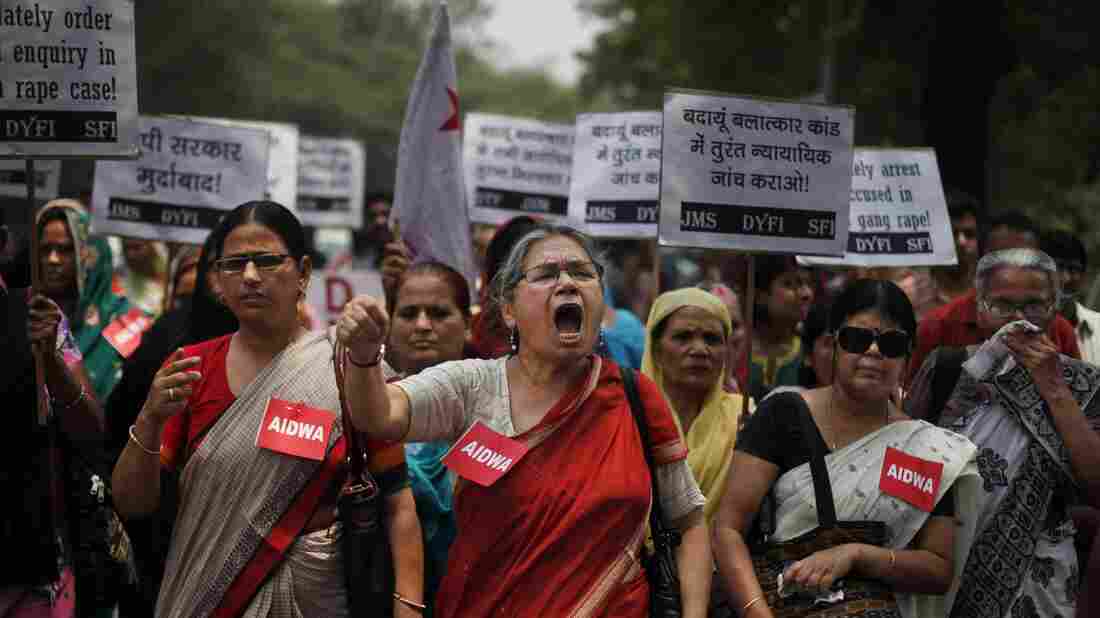 Women shout slogans during a protest against the gang rape and hanging of two teenage girls. Beyond highlighting the rampant sexual violence in India, the crimes are drawing attention to a glaring and fundamental problem across the country that threatens women's safety: the lack of toilets. Altaf Qadri/AP hide caption 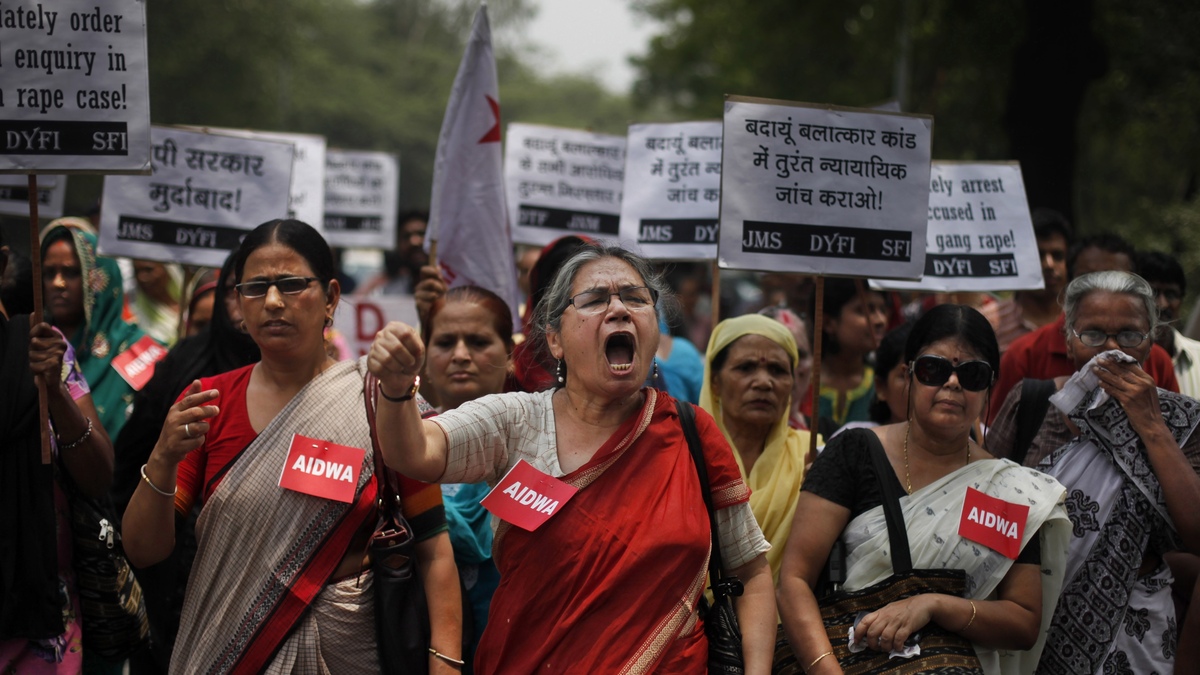 Women shout slogans during a protest against the gang rape and hanging of two teenage girls. Beyond highlighting the rampant sexual violence in India, the crimes are drawing attention to a glaring and fundamental problem across the country that threatens women's safety: the lack of toilets.

A young girl sweeps fallen debris from a tempest that blew through her village of Katra Sahadatganj one recent evening. This remote spot in Uttar Pradesh — India's largest state — has become the center of another gathering storm.

It was here two weeks ago where two young girls were audaciously attacked: raped and hanged from a tree. Inter-caste violence and patriarchal attitudes combined to make a chilling spectacle in this impoverished place of mud-caked children and hand-pumped water.

It's a question of belief in human dignity, which somewhere along the line we seem to have lost.

But the deaths conceivably could have been averted if the girls had had access to a toilet at home. Lacking one, on the night they were killed, the two teens did what hundreds of millions of women do across India each day: Under the cloak of darkness before sunrise or after sunset, they set out for an open field to relieve themselves.

Guddo Devi, 35, is a cousin of the two slain girls and says women normally move in pairs to avoid being preyed upon.

"When we step out of the house we are scared," Devi says. "And we have to go in the mornings, in the evenings, and when we cannot stop ourselves, at times we go in the afternoons as well. ... And there are no bathrooms. We don't have any kind of facility. We have to go out."

Others complained of harassment in the fields, but only now, after the double rape and murder, do they fear for their lives performing the simplest bodily function.

A Toilet For Change

Social entrepreneur Bindeshwar Pathak has offered to build a toilet for every house in the village. It wouldn't be the first time for the man known in India as the "toilet guru."

Nine hours' drive away in the bordering state of Haryana, Pathak has already transformed the village of Hir Mathala with his simple two-pit design.

Swinging open the door to a toilet bowl built on a raised platform that stands 25 feet from the front door of the owner, Pathak says it requires only one liter to flush, compared with the usual nine liters of water.

With Pathak's low-maintenance, low-cost toilet — about $250 — one pit gets filled while the other biodegrades the waste, which can be used as fertilizer. Each of the 144 households has been outfitted in this village, a village Pathak calls a "pathfinder ... to show the entire nation that you should have toilets in your house. And here nobody goes outside. This is the beauty of this village," he says. 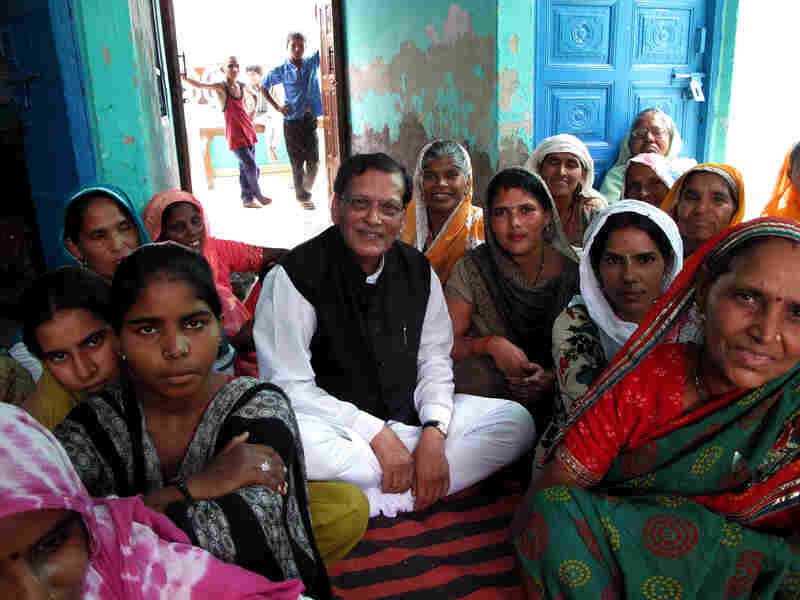 Humanitarian Bindeshwar Pathak sits surrounded by women from the village of Hir Mathala in the northern Indian state of Haryana. Pathak built low-maintenance, low-cost toilets in the village and wants to do the same in other villages. Julie McCarthy/NPR hide caption 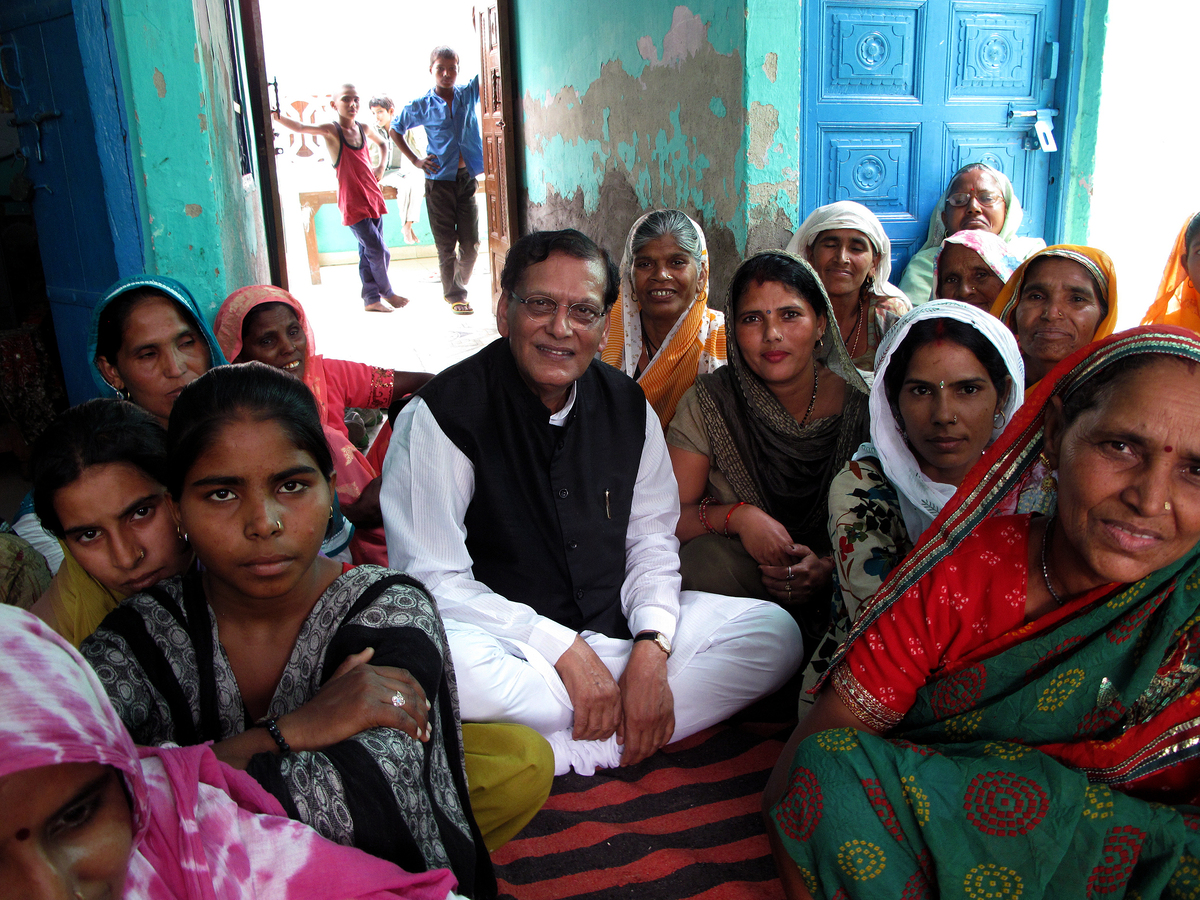 Humanitarian Bindeshwar Pathak sits surrounded by women from the village of Hir Mathala in the northern Indian state of Haryana. Pathak built low-maintenance, low-cost toilets in the village and wants to do the same in other villages.

The women of Hir Mathala village arrange themselves on the floor and literally sing the praises of the 71-year-old Pathak, whose lowly toilet has become a tool of social change.

Their song is about a wife's plea for a toilet. In rural India, households that can afford to build a latrine often don't. Resident Shelia Nahelia says her husband refused because of the expense. So Nahelia stitched clothes to raise $50, her family's portion of the cost and a small fortune for her.

Vijay Laxmi smiles radiantly. The 35-year-old says she and her children have never been healthier.

"There has been a huge change in our lives. Before, the men would follow us, wait for us to sit in the field and watch. Now, thanks to Mr. Pathak, we have a lavatory at home." Laxmi says, "We don't need to step out, and we feel better. Our dignity which is an ornament for us — is now safe."

Pathak's NGO, Sulabh International, has built 1.3 million toilets in Indian homes the past four decades. While commendable, the Sulabh toilet has not dramatically reduced the incidence of open defecation, which presents dire consequences for public health.

The practice contaminates food and water, and transmits diarrhea-related diseases that kill 700,000 children every year worldwide — 200,000 of them are in India, says Brian Arbogast, director of the Water Sanitation and Hygiene Program at the Bill and Melinda Gates Foundation.

"There is an increasing body of evidence that says poor sanitation when a child is young, can lead to mental and cognitive stunting," Arbogast says.

He says the Gates Foundation set up a challenge to "reinvent" the toilet that can accommodate the deprivations of India.

A team from Cal-Tech was awarded the most promising design and is one of three now being tested in India. Team member Clement Cid says it meets the goal of 5 cents per user per day, but the toilet still costs $1,500.

"Our goal is to make it cheaper, and we're working on the core component of the system and we are driving the cost down," Cid says. "But the benefit on the overall society is huge."

Arbogast says even affordable innovations won't alone solve India's sanitation problems. He says India needs to shift the mindset that open defecation is "natural and normal" to "it is not healthy."

"You teach them that their children and their families are suffering a lot of sickness because of basically fecal matter being transmitted, by flies or other ways, to the food they eat," Arbogast says. "And once people really realize that, that can really be a triggering event for a community."

Diane Coffey, a Ph.D. candidate with Princeton's Woodrow Wilson School and an economist, says simply providing latrines is no guarantee that people will actually use them. She studied five northern Indian states and found that 19 percent of women with access to a latrine still preferred to defecate in the open.

"They're used to it, for one," Coffey says. And she says the research is clear that "building toilets without addressing common norms, attitudes and beliefs around latrine use is unlikely to reduce open defecation in rural India."

Gouri Choudhury of the human rights group Action India says the country's political leadership has failed to grasp the gravity of the problem.

"It's a question of belief in human dignity, which somewhere along the line we seem to have lost," Choudhury says.

India and China each have more than a billion people, and here's the contrast: The World Health Organization says in China, 1 out of every 100 people defecates out in the open; in India, it's 1 out of every 2 people — the highest rate in the world.

"We launched a 'No Toilet, No Bride' campaign," Ramesh says. "I would go out and exhort women not to get married into families that did not have a toilet. And this worked. In many parts of the country, women refused."

But a social movement to revolutionize attitudes and behaviors toward sanitation in India may be in order.

Julie McCarthy is NPR's correspondent based in New Delhi, India. You can follow her on Twitter @JulieMcCarthyJM.