Accessibility links
How The Kurds Could Benefit From Iraq's Crisis : Parallels While much of the country is in turmoil, the Kurdish areas in northern Iraq have remained peaceful. The upheaval could help advance the Kurds' long-standing quest for an independent state. 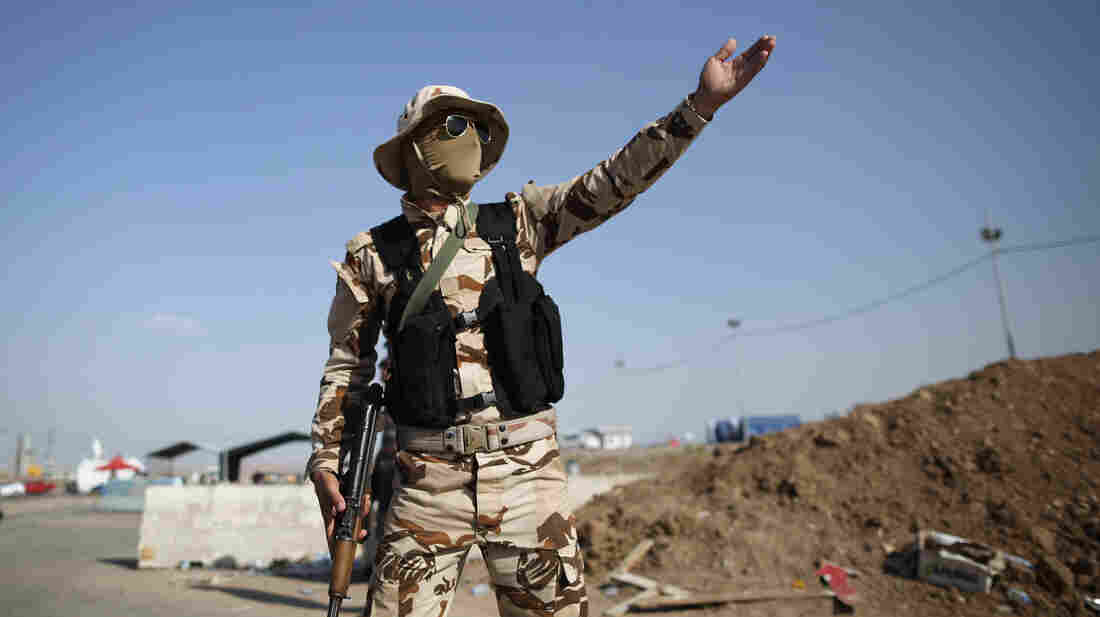 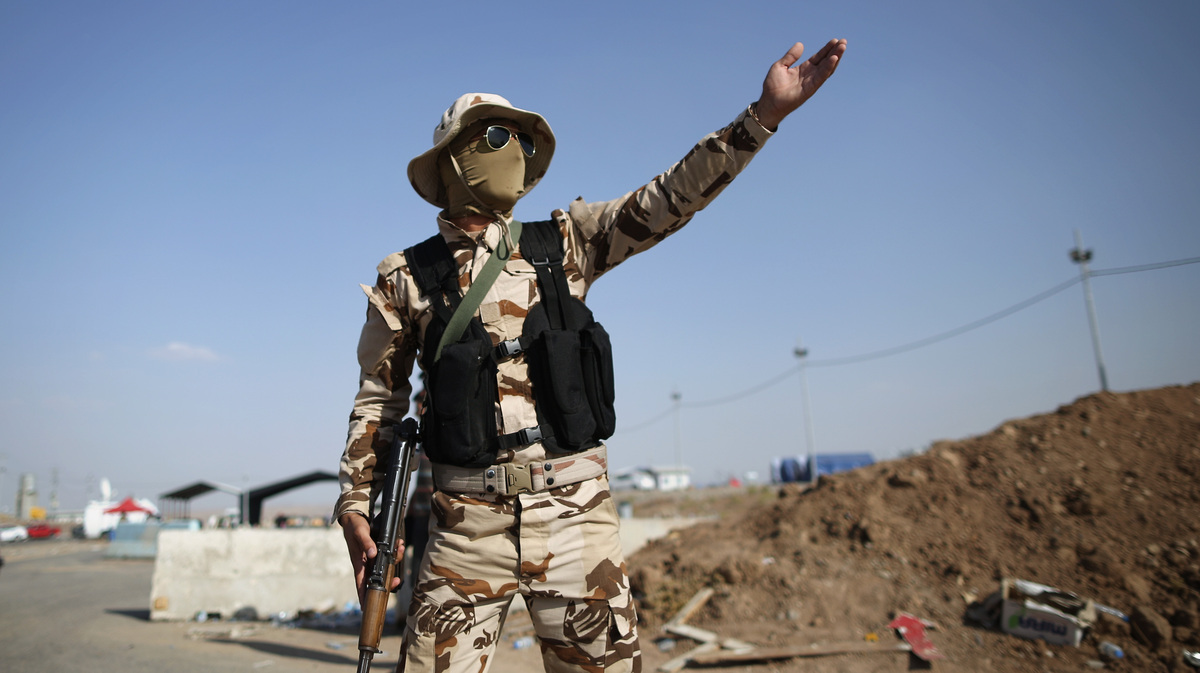 The Kurdish areas of northern Iraq have remained peaceful despite the recent surge in fighting. Here, a member of the Kurdish peshmerga forces directs traffic at a checkpoint in Kalak, in northern Iraq.

The current crisis in Iraq has focused on the Sunni-Shiite conflict, but relatively little has been heard from the other major ethnic group in Iraq, the Kurds. And that's just the way the Kurds would like it.

The Kurds have been seeking an independent state for a century but have been stymied at every turn. As the Shiites and the Sunnis slug it out, the Kurds are demonstrating, so far at least, that they can maintain peace and stability in their semi-autonomous region in the northeastern part of the country.

The latest round of fighting in Iraq is still playing out and the outcome is uncertain. But the Kurds hope they can make some quiet gains during this turbulence that will leave them much stronger to advance their quest for statehood.

Here are a few key things to know about the Kurds:

Who are the Kurds?

Kurds are an ethnic group that claims parts of Iraq, Iran, Turkey and Syria as a homeland. Kurds are predominantly Sunni Muslim, but their leadership has been secular for decades.

The original deal to carve up the Middle East after World War I was supposed to give them their own state, but that treaty was scrapped as Turkey clawed together a country from the ruins of the Ottoman Empire.

The Kurds have rebelled in some form or another almost continuously in Iraq. When the 1991 Gulf War failed to topple Saddam Hussein, the U.S. and its allies created a no-fly zone to protect Kurdish rebels from his vengeance. Since then, the three Kurdish provinces in northern Iraq have been autonomous.

The Kurds eagerly assisted the U.S. invasion of Iraq in 2003 and demanded that the new Iraqi Constitution codify their semi-independent region. It's the best deal they've had in a century, but Kurdish leaders make no secret that their dream is to have an independent country, including territories outside the border of the Kurdistan Regional Government, or KRG. 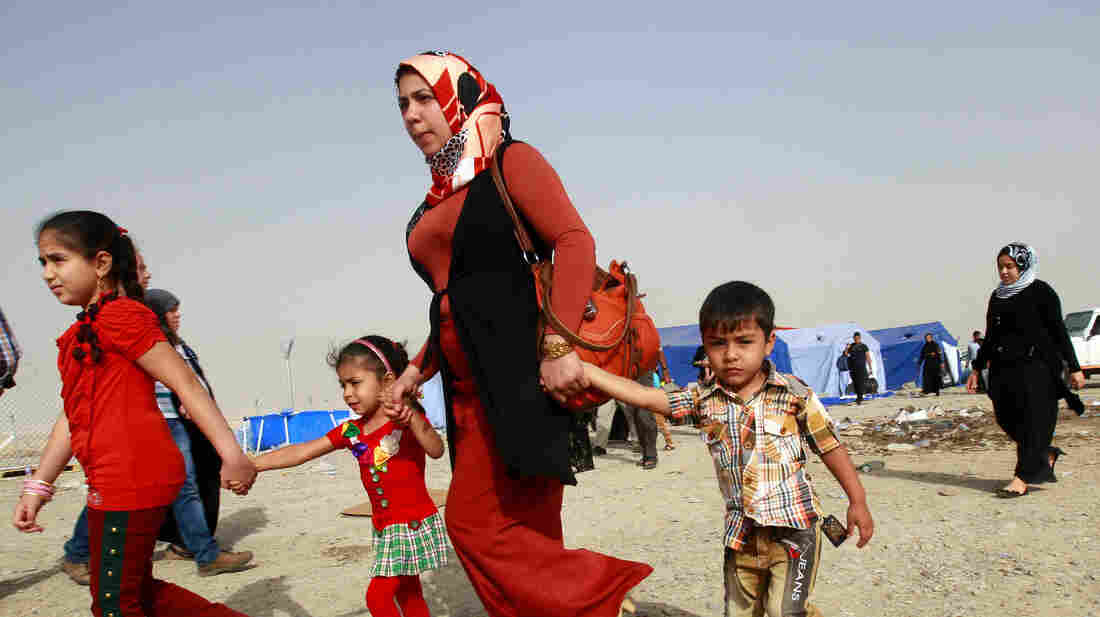 This family is among the hundreds of thousands of Iraqis who have fled the northern city of Mosul after Sunni militants captured the city last week. Many have gone to the nearby Kurdish region, which has remained largely peaceful. AP hide caption 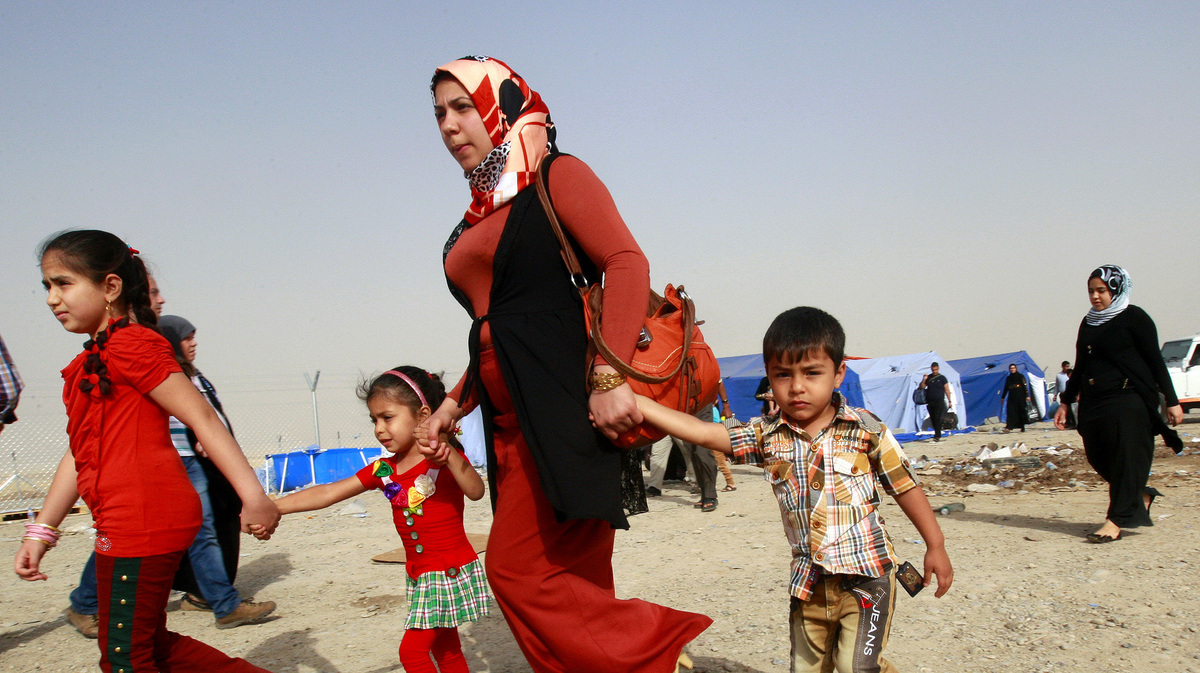 This family is among the hundreds of thousands of Iraqis who have fled the northern city of Mosul after Sunni militants captured the city last week. Many have gone to the nearby Kurdish region, which has remained largely peaceful.

How have the Kurds responded to the fighting in northern Iraq?

The latest crisis erupted last week when Sunni militants seized Mosul, one of the country's largest cities. It has a Sunni Arab majority and a sizable Kurdish minority. The Kurds have always been active in the city, but they've never claimed it should be part of Kurdistan. The Iraqi army has no immediate prospect of taking back Mosul.

"I think it will be very difficult for the situation to go back to the same as before," Kurdistan's Prime Minister Nechirvan Barzani told the BBC this week. "We see it now — Iraq — as before Mosul and after Mosul."

Barzani said retaking Mosul is not the Kurds' fight. Their priority is to protect Kurdistan. The Kurds don't want to be blamed for splitting up the country — it's much better for them if the rest of Iraq just disintegrates. And that may be happening with the fall of Mosul.

Why is the city of Kirkuk so important to the Kurds?

Kirkuk is also home to Arabs, Turkmens and Christians, but the Kurds call it their Jerusalem. It's hallowed ground — the site of some of Saddam's worst ethnic cleansing against Kurds. Kirkuk's oil wealth could help make an independent Kurdistan viable.

The governor of the Kirkuk region, Najmaldin Karim, who is a Kurd, is well-regarded for embracing all the groups in the province. But he told NPR last week, "There's true danger of full sectarian war. If that happens, I think Iraq will disintegrate and, of course, [Kurds] have every right to declare their own future to protect their people."

Karim said Kurdish police and troops took over Iraqi army positions in Kirkuk as the soldiers fled their posts or joined the enemy.

This has presented the Kurds with a great opportunity. Kurdish soldiers have effectively annexed the disputed territory in Kirkuk and elsewhere in the name of defending Iraq against the militant Sunni group ISIS, the Islamic State of Iraq and Syria.

For Fleeing Iraqis, Kurdish Areas Are The Safe Zone

How stable is Kurdistan?

Kurdistan has internal divisions and the two main political parties even fought their own civil war in the mid 1990s. They still fight pretty hard over turf and patronage, but nonviolently.

The heirs to Kurdistan's two leading, and feuding, families are now the prime minister of the Kurdistan Regional Government, Nechirvan Barzani, and his deputy, Qubad Talabani.

If they can continue to cooperate, Kurdistan's chances of winning an independent state increase. The region has its own constitution, holds its own elections, and has consulates around the world. Watchdog groups point to rampant corruption and intimidation of journalists by the government. But international businesses and media organizations still prefer Kurdistan to the rest of Iraq for security and stability.

What do the neighbors think?

Iran, Syria and Turkey all have their own Kurdish populations with a history of rebellion. Iraq's Kurds have been manipulated by the neighbors for decades.

But a major shift started as the Kurdistan Regional Government solidified: Turkey started making billions of dollars from trade and construction in Iraqi Kurdistan. The Kurdistan government also provided a buffer between the Turkish border and the turmoil in Arab Iraq.

As Turkey became disaffected with the government of Iraqi Prime Minister Nouri al-Maliki, it encouraged Kurdish plans to export oil through Turkey.

"This deal for Turkey is a long-term strategic play ... and it just happens to be taking form at a time that Ankara's relations with Baghdad are horrible," Lando said.

Turkey once denied that a Kurdish ethnicity even existed, and fought its own Kurdish rebels for decades. It's a mark of how much has changed that a close adviser to Turkish Prime Minister Recep Tayyip Erdogan said this week that Turkey is open to a divided Iraq.

The U.S. has long refused to deal with the Kurds as an independent group. The American policy has been seen, at least in part, as deference to Iraq or Turkey or other allies in the region that might object.

Aliza Marcus, an analyst who has long followed the Kurds, recently argued in The New York Times that the Kurds are now a key ally themselves and the U.S. should start treating them as such.

"The Washington approach of putting the Kurds second should finally end," she wrote. "The U.S. should recognize the importance of the Kurds to a stable Middle East."

NPR correspondent Quil Lawrence is the author of Invisible Nation: How the Kurds' Quest for Statehood Is Shaping Iraq and the Middle East. You can follow him @QuilLawrence