Accessibility links
In A Remote Corner Of Pakistan, A Mass Exodus : Parallels Pakistan's military is waging an offensive against the Taliban, and the outcome is uncertain. But nearly a half-million civilians have already fled their homes in an area that has few resources.

In A Remote Corner Of Pakistan, A Mass Exodus

In A Remote Corner Of Pakistan, A Mass Exodus 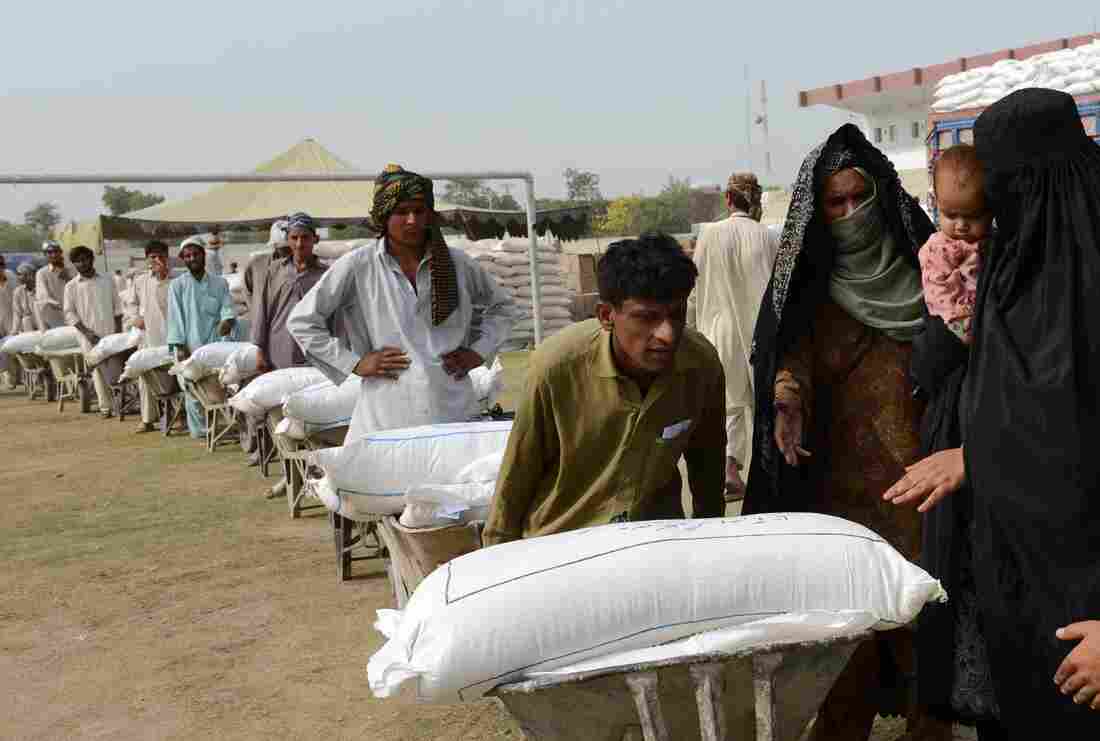 Workers prepare to distribute food Wednesday to civilians fleeing a Pakistan military operation against the Pakistani Taliban in North Waziristan, near the border with Afghanistan. Close to a half-million residents have fled their homes in recent days. A Majeed/AFP/Getty Images hide caption 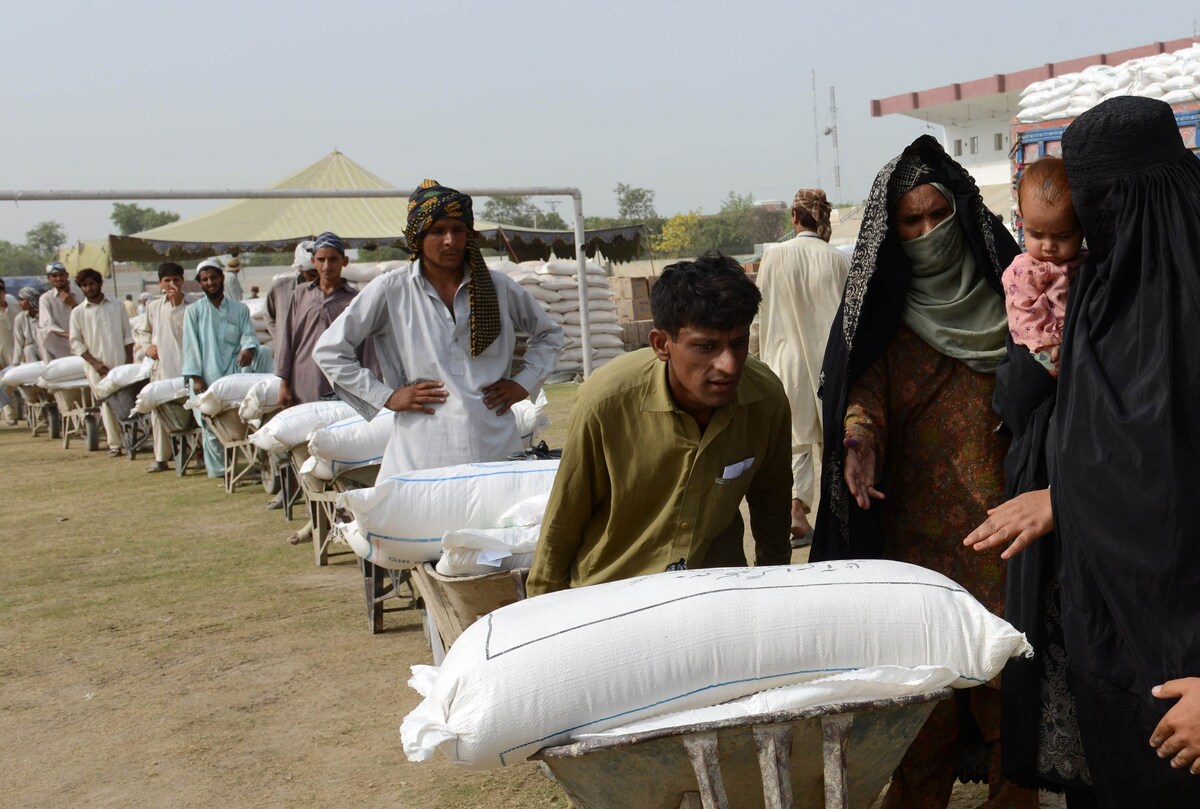 Workers prepare to distribute food Wednesday to civilians fleeing a Pakistan military operation against the Pakistani Taliban in North Waziristan, near the border with Afghanistan. Close to a half-million residents have fled their homes in recent days.

The people of Pakistan are all too familiar with the tidal waves of humanity that can roll across the landscape with the outbreak of war.

Living in their midst are some 1.6 million Afghan refugees who, over the last 35 years, moved eastward to escape the violence that periodically engulfs their own unstable country.

Now Pakistan is soaking up another human tsunami, this time from the North Waziristan tribal area, an oblong of land slightly larger than Rhode Island, set amid the forests and mountains along its turbulent north-west frontier.

A dusty cavalcade of battered coaches, garishly-painted trucks, rickshaws, motorbikes and donkey-drawn carts has chugged, barged and honked its way out of the hills over the last nine days.

It has moved painfully slowly, because of the sheer weight of numbers and the numerous checkpoints. Plodding alongside, beneath the fierce summer sun, was a throng of people, who could not afford the vastly inflated transport prices, or simply could not find a vehicle because of overwhelming demand.

Pakistan's government officials have registered more then 450,000 arrivals, and more than a third are children. The true figure is believed to be significantly higher. Many slipped through the net and a large number went to Afghanistan.

For many, the destination was Bannu, a Pakistani town just outside the tribal belt that, in the 19th century, was used by British colonial forces as a base to launch attacks on rebellious Afghan border tribes.

These people, who're Pashtuns, have every reason to flee: The Pakistani military is using fighter jets, gunship helicopters, artillery, and snipers to blast suspected hide-outs used by the local Taliban and their foreign allies, who have been based in North Waziristan for years.

The catalyst that triggered this military offensive was the attack on June 8 by militants on the international airport in Karachi, Pakistan's economic hub. During the five-hour seige that ensued, 37 people died, including the assailants. 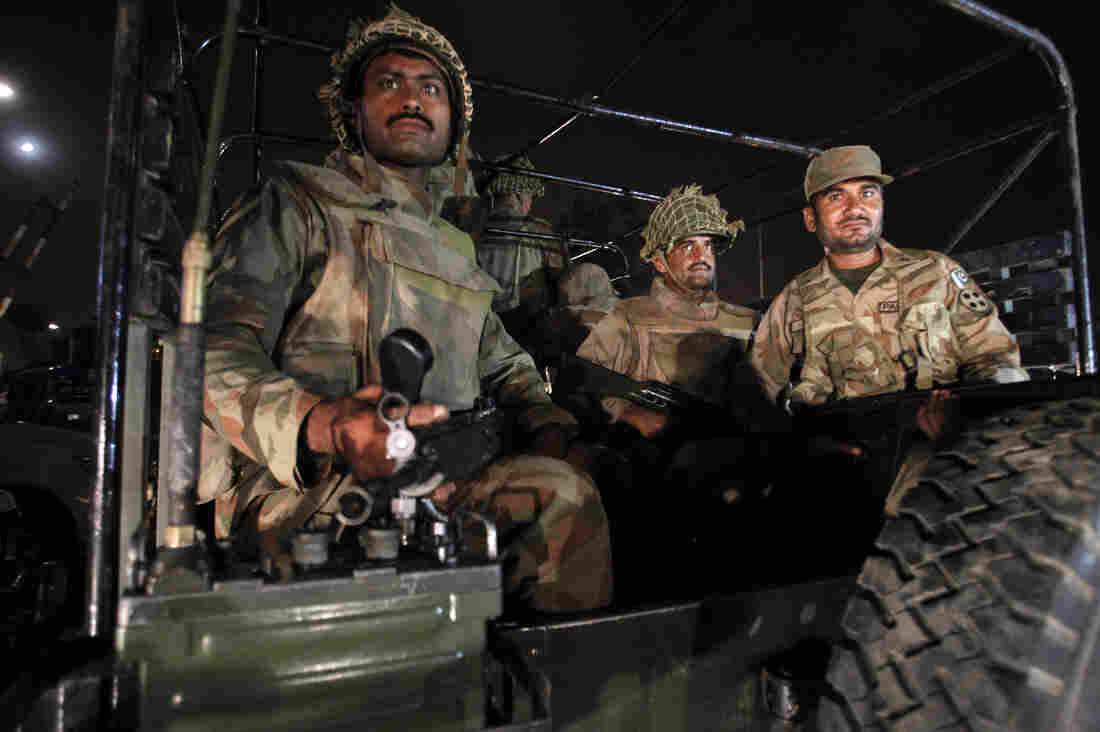 Pakistan army troops arrive at Karachi airport following an attack on June 8 by the Pakistani Taliban. More than 30 people were killed, and the military has now launched an offensive against the Taliban. Fareed Khan/AP hide caption 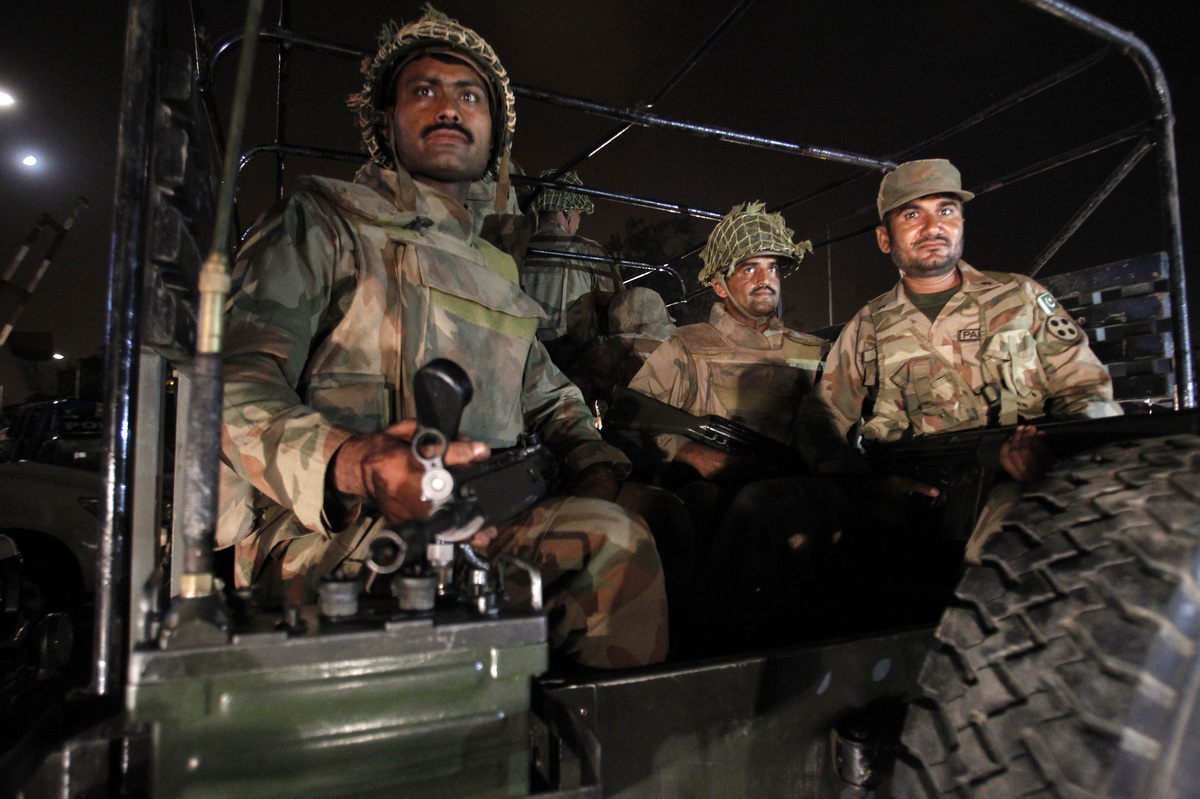 Pakistan army troops arrive at Karachi airport following an attack on June 8 by the Pakistani Taliban. More than 30 people were killed, and the military has now launched an offensive against the Taliban.

The military operation in North Waziristan is in its early stages and a far more intense ground assault is expected to begin next month.

Stories have been emerging from this multitude of travelers that provide an insight into an area — and a conflict — where international correspondents are barred from visiting by the Pakistan's government.

Khalil Rehman Wazir is from a village close to the town of Mir Ali. He lives elsewhere, but went back recently to secure his home and possessions. He says night was filled with the frightening sounds of war — of artillery, mortar and machine-gun fire.

"During the day there was no shelling, but after evening prayers, it erupted everywhere," he said. "We were confined to our house."

Wazir's journey out of North Waziristan took him through Mir Ali where he said many buildings are destroyed, and the local bazaar has suffered heavy damage.

With Airport Attack, Pakistani Taliban Show Off Their Reach

He said the militants, both local and foreign fighters, have vanished.

How One Man's Arrest In London Shut Down Pakistan's Megacity

"They seem to have escaped, although some are in hiding," he said. "I didn't see any foreigners. They used to roam openly around the bazaar. They weren't hidden, they would ride around on motorbikes openly."

His description of the exodus from North Waziristan portrays a grueling ordeal in which a journey of two hours turned into two days.

"Poor people were walking on foot. They looked like a human sea, of youngsters and adults," he added. "Some people fainted, so people poured water on them to revive them."

He believes if these people are now not treated well by Pakistan's authorities, there will be a backlash.

"People are going to get angry," he said. "They're asking themselves - what can we do? We have done nothing wrong!"

There may be one up-side to all this: North Waziristan is one of the few places on the planet where polio has not been eradicated. This exodus has enabled officials to administer more than 300,000 vaccinations to a population that's normally beyond their reach because of the risk of being shot by the Pakistani Taliban. But there are also fears the disease will now be spread more widely.

Pakistan is already struggling with a daunting array of economic and security problems. It is far from clear how this sea of internally displaced people will be fed, educated, and cared for medically.

No one knows when they will be allowed home. Various government bodies have announced emergency assistance funds. But so far these seem woefully inadequate.

Tribal elder Haji Jamal Udin, 60, traveled from the mountains to Pakistan's capital, Islamabad, with 35 family members, including a dozen kids. He's squeezed them into a six-bedroom rented house.

"We hope the government will do something for the children," he said. "Otherwise they won't get any schooling. If the government doesn't help, it's going to be very difficult for us."

Pakistan's Dawn newspaper warned Thursday of an "unfolding humanitarian crisis" and accused the government of leaving it to junior ministers to handle.

An editorial says that this "miserable and haphazard" approach could eventually undermine the government's primary goal of eliminating the Taliban and its allies.

The paper asked: "What is the long-term possibility of success against militancy if the sympathy of the locals ebbs and possibly even switches to the militants' side?"