Accessibility links
In Blogs And Tweets, India's New Leader Bemoans Lack Of 'Honeymoon' : Parallels Narendra Modi became prime minister just a month ago. He had a big agenda, but has yet to launch any major programs. But the tech-savvy leader has racked up 5 million Twitter followers. 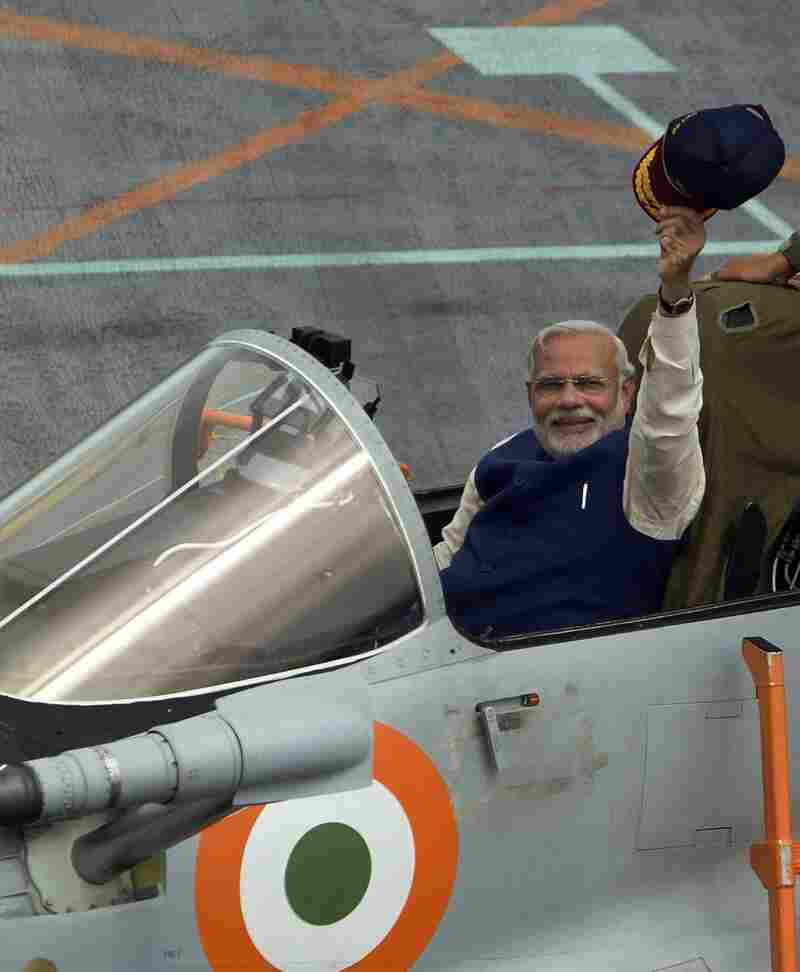 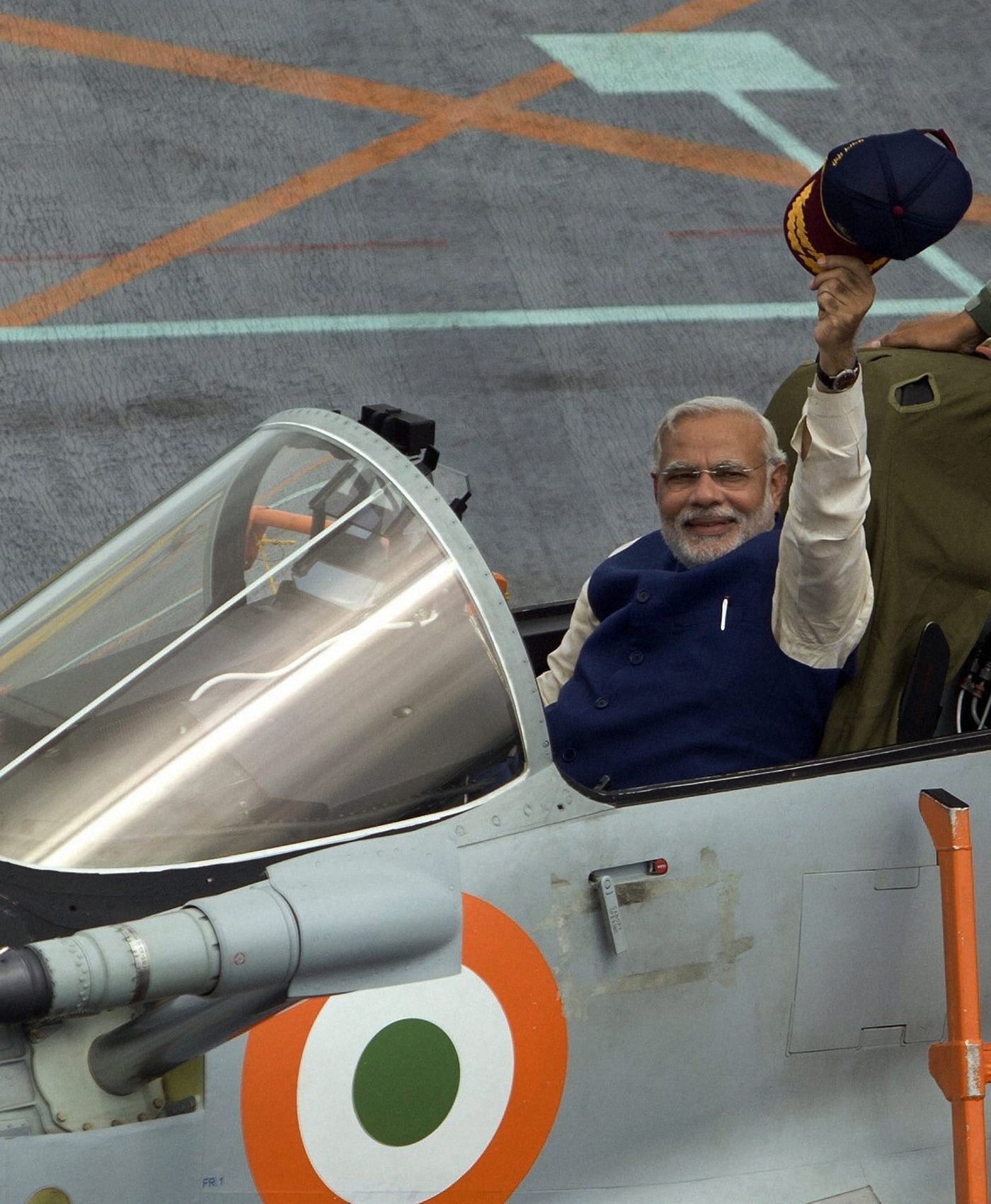 India's Prime Minister Narendra Modi waves from a MIG 29 fighter aboard the country's largest warship, INS Vikramaditya, off the coast of Goa, India, on June 14.

India's new prime minister, Narendra Modi, says he has been denied the "honeymoon" period that new governments traditionally enjoy. Just one month after taking office, he has also asserted that he has defied expectations and secured a firm grip on India's sprawling government.

Given the groundswell of expectation and anxiety surrounding Modi's ascent, there's been unusual attention given to his first 30 days. His decisive victory came despite controversial allegations that he stood by as Hindu-Muslim riots engulfed parts of the western state of Gujarat in 2002, when he was chief minister.

"Forget [a] hundred days; the series of allegations began in less than a hundred hours," Modi rued in his blog marking his first four weeks.

Indian Express opinion editor Vandita Mishra says Modi's no-honeymoon lament suggests he's carried over "a sense of siege and conspiracies" nurtured in his 12 years as Gujarat chief minister. Mishra says, "Antagonistic relations between Modi and the media are still a work in progress."

However, there is no disputing that Modi has taken the reins of power with gusto, in sharp contrast to his predecessor, Manmohan Singh, who was thought to have suffered from acute indecisiveness.

Modi has issued a 10-point agenda to improve everything from the economy, transparency and confidence in India's ordinarily truculent bureaucracy. The proposed changes have been cheered by the Indian public tired of a rudderless government and yearning for "Acche Din," or the "Good Days," which Modi promised to bring about in his campaign.

Modi began with housekeeping — literally. The prime minister, as fastidious in his dress as his daily regimen, targeted slovenliness in government offices.

Flea-ridden monkeys frequently grace the windowsills and staircases of ministry buildings. Discarded furniture, rotting files and dirty bathrooms often line the corridors. Complying with Modi's orders to clean up, bureaucrats have snapped to, with old computers, broken chairs and steel cabinets piled high and hauled off to the junk yard.

Surveying a table stacked with files, one reluctant senior bureaucrat said, "There is a fear that I may lose a document, which could prove fatal."

Modi's blistering pace also has ministerial secretaries — the top-ranking civil servants — rushing to keep up. His preference for using Hindi has some bureaucrats burning the midnight oil to please the boss and perfect the language. While English remains well-entrenched in Indian officialdom, many Hindu nationalists have a visceral loathing of English and identify it with India's colonial past.

But mandating Hindi is emotionally charged in India, and Modi's government has touched off a furor in a country where 22 languages are recognized in the constitution. The government has beaten a diplomatic retreat.

With neighboring Pakistan, Modi and Prime Minister Nawaz Sharif bonded on day one over their mothers. The two men exchanged a shawl and a sari for their mothers to the delight of Twitter-sphere that gushed about the "sari diplomacy" between the two nuclear-armed rivals in the hopes it would reset relations. 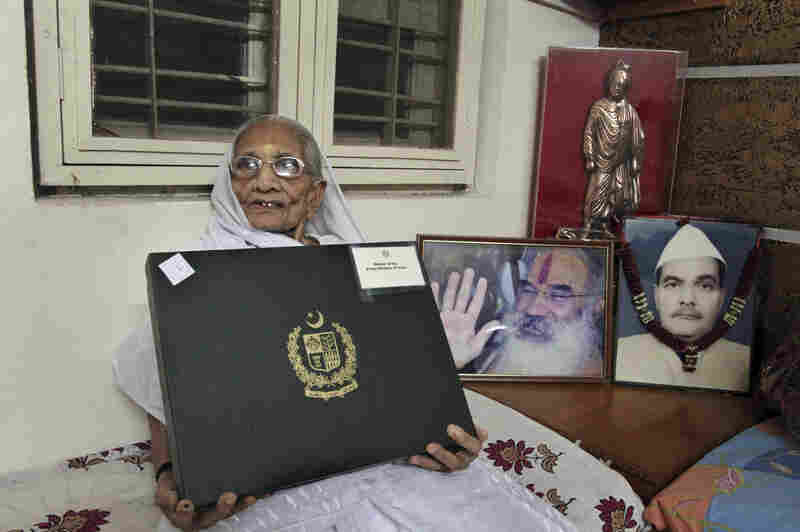 Hiraben, mother of India's Prime Minister Narendra Modi, holds a box with a sari gifted to her by Pakistani Prime Minister Nawaz Sharif on June 5 in Gandhinagar, India. Earlier Modi had gifted a shawl to the Pakistani leader's mother. Ajit Solanki/AP hide caption 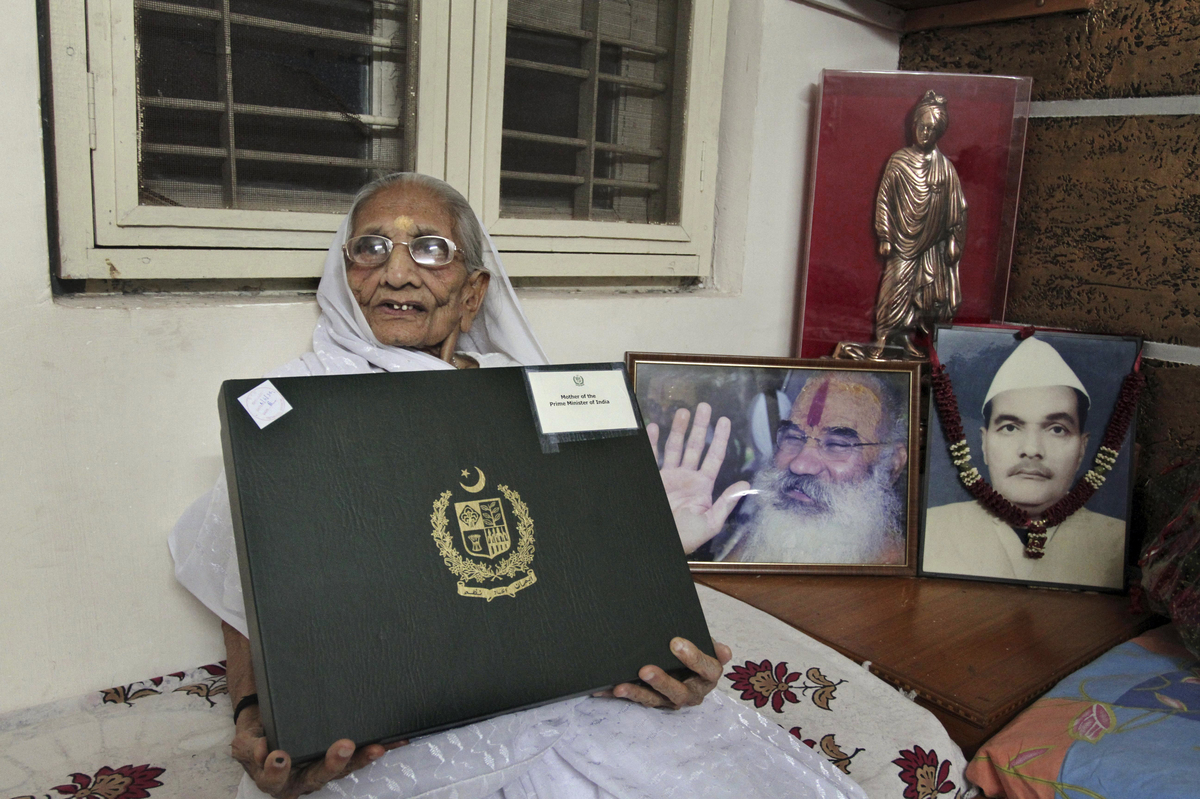 Hiraben, mother of India's Prime Minister Narendra Modi, holds a box with a sari gifted to her by Pakistani Prime Minister Nawaz Sharif on June 5 in Gandhinagar, India. Earlier Modi had gifted a shawl to the Pakistani leader's mother.

In another confidence-building measure, Modi's government this week decided to open its civilian nuclear sites to greater scrutiny, ratifying the so-called "Additional Protocol" with the International Atomic Energy Agency.

The move could help unlock tens of billions of dollars in U.S.-led investment in a new generation of nuclear power for India.

The tech-savvy Modi expects all ministries to open Facebook and Twitter accounts. An insatiable tweeter, Modi has reached 5 million followers on Twitter. India's prime minister is now the fourth most popular global leader on the micro-blogging site, after President Obama and the pope.

Virtual connection is one thing, speaking out publicly is another.

For a man who was so voluble on the campaign stump, Modi has maintained a strange quiet on key question before his government.

He's made no public address about the abduction of Indian laborers in Iraq by militants of the Islamic State of Iraq and Syria. After pledging to make women a priority, Modi made only a glancing reference to the sexual assault and hanging of two young girls last month, a crime that shocked the nation. Police are now investigating whether the incident was a case of honor killing. There has also been an awkward silence regarding the sexual assault charges facing one of his junior ministers.

But Modi is credited with taking urgent stock of India's weak monsoons, which provides crucial rainfall each year. A paucity of rain risks drought and higher food prices. Food inflation slowed to 9.4 percent year on year in May, but a real respite does not appear on the horizon.

"Everything continues to be very expensive. Prices of food and other essential commodities are very high," says Rajanikant Dayal, a retired army officer living in New Dehli. He says Modi "should find a way to bring down the prices. Modi must understand that people are desperate and he has so far failed to take immediate action." 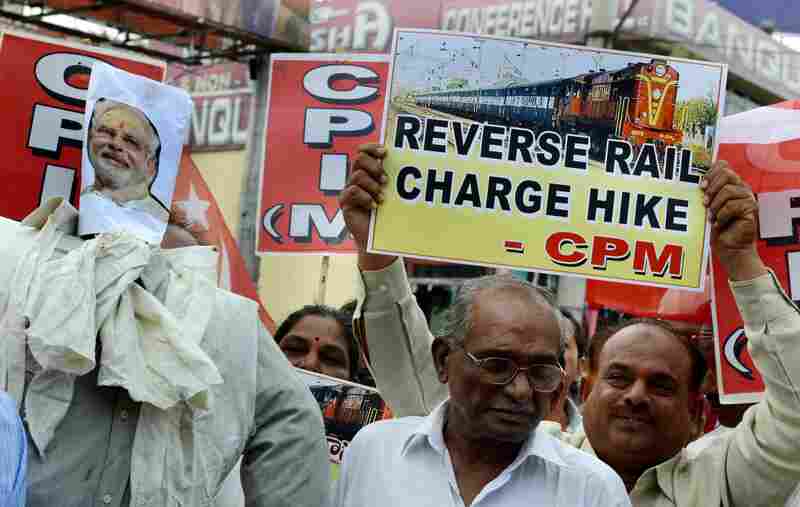 Indian activists of the Communist Party of India-Marxists (CPI-M) protest against a price hike in railway fares in Hyderabad, India, on June 21. The government subsequently rolled back a proposed fare increase. Noah Seelam/AFP/Getty Images hide caption 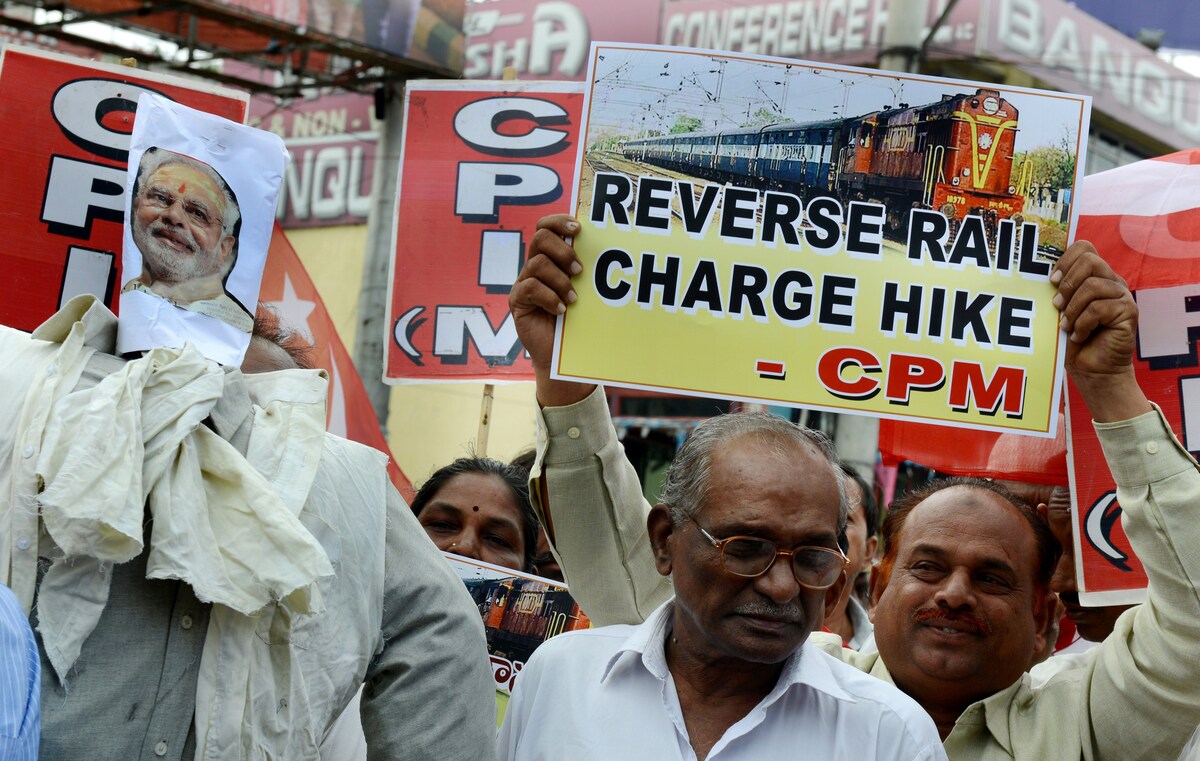 Indian activists of the Communist Party of India-Marxists (CPI-M) protest against a price hike in railway fares in Hyderabad, India, on June 21. The government subsequently rolled back a proposed fare increase.

Modi is now busy lowering the expectations he built up during the election, realizing that slow growth and rising inflation are not quick fixes but long-term challenges. He has prescribed "bitter medicine" to rescue the economy, eyeing cuts in popular subsidies on such things as kerosene used for cooking.

But a sharp increase in railway fares and a subsequent rollback has made Modi look unsure and indecisive, as he bowed to political pressure to reverse the planned rate hikes.

Headline-grabbing news is further denting Modi's self-described short "honeymoon." His health minister says sex education in schools should be banned. That followed charges of interference with India's Supreme Court. Former Solicitor General Gopal Subramanium accused the government of assassinating his character while sabotaging his appointment to the Supreme Court.

Modi, meanwhile, has told newly elected parliamentarians from his Bharatiya Janata Party to uphold their own self-worth. Hitting out at the culture of sycophancy in the halls of power, Modi told the novice members to shun the servile practice of "touching the feet of senior leaders."