Accessibility links
Have The Islamist Militants Overreached In Iraq And Syria? : Parallels After sweeping military victories, the group now known as the Islamic State is demanding loyalty from all Muslims. Like other radical Islamist groups, they may be alienating potential supporters.

Have The Islamist Militants Overreached In Iraq And Syria?

Have The Islamist Militants Overreached In Iraq And Syria? 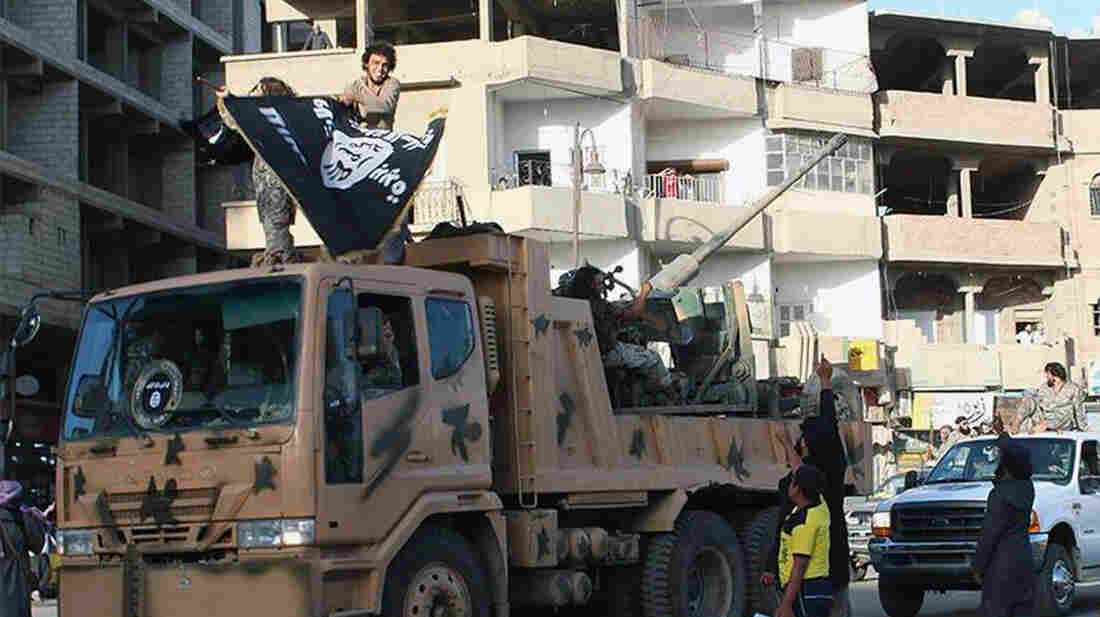 Fighters from the Islamic State hold a parade in Raqqa, in northeastern Syria, displaying equipment captured from the Iraqi army. The group has declared a caliphate, or a single Islamic state, in the parts of Syria and Iraq it controls. This undated image was posted by the Raqqa Media Center, a Syrian opposition group, on Monday. Raqqa Media Center/AP hide caption 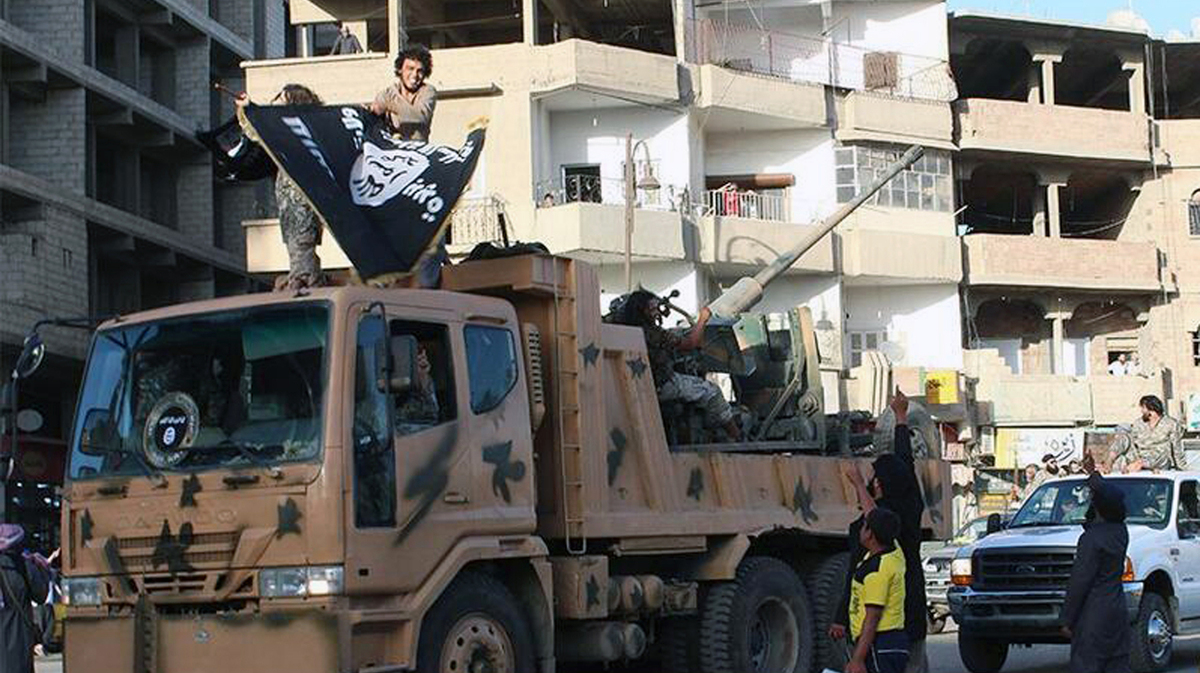 Fighters from the Islamic State hold a parade in Raqqa, in northeastern Syria, displaying equipment captured from the Iraqi army. The group has declared a caliphate, or a single Islamic state, in the parts of Syria and Iraq it controls. This undated image was posted by the Raqqa Media Center, a Syrian opposition group, on Monday.

The Islamist radicals who have declared an Islamic caliphate on land they control straddling Iraq and Syria are waging an audacious publicity stunt, according to some analysts.

While it may bring them even greater attention, it's also likely to be an overreach that will open rifts with its current partners, the Sunni Muslims in Iraq who welcomed the militant group in early June. They all share the goal of overthrowing Iraq's Shiite Prime Minister Nouri al-Maliki and his sectarian rule, but the more secular parts of the Sunni coalition didn't sign up for an Islamic state.

"By announcing the caliphate, they are picking a fight with everybody," says David Kilcullen, a guerrilla warfare expert and former chief counter-terrorism strategist for the U.S. State Department.

The group has been taking territory since last year, first in Syria and now in Iraq. They grabbed international attention last month when they seized the northern Iraqi city of Mosul, one of the largest and most important population centers in Iraq.

But so far, at least, the Islamic State has not tried to make the city the centerpiece of the declared caliphate.

"No, no, there is nothing like that in Mosul," insists a former Iraqi military officer when reached by phone. He dismisses the caliphate with a snort, because, he says, "the other groups object."

The former officer says he fears retribution from the Maliki government and didn't want his name published. He says he is part of the Sunni alliance in Mosul that originally welcomed the Islamic State. Now, he has some doubts. 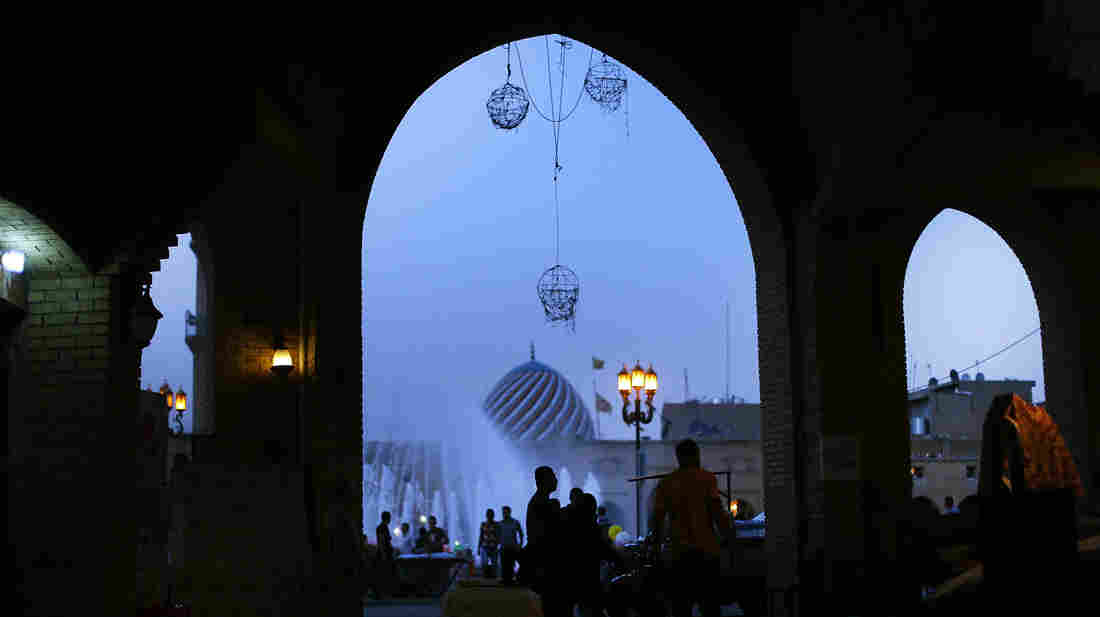 People walk through the market area in Erbil, Iraq. Tens of thousands of displaced Iraqis and Syrians have converged on the ancient city after fleeing fighting in their hometowns. Spencer Platt/Getty Images hide caption 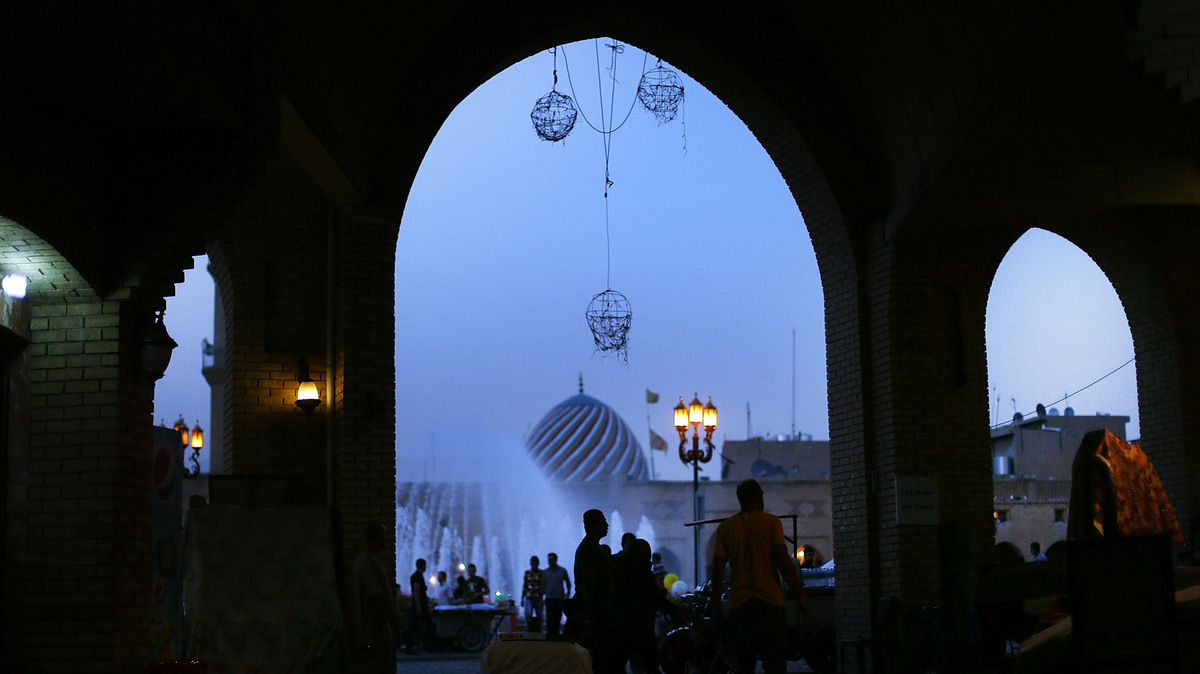 People walk through the market area in Erbil, Iraq. Tens of thousands of displaced Iraqis and Syrians have converged on the ancient city after fleeing fighting in their hometowns.

"We will soon name one of our people to be the boss in Mosul," he says. "There is no caliphate here."

A Sunni Alliance Of Convenience

The Islamic State declared the caliphate on June 30, three weeks after a successful sweep across northern and western Iraq in a land grab that includes strategic border posts.

A small group of IS fighters served as the "tip of the spear" in this Sunni alliance of convenience. In the first thrust of the spear, IS was supported by tribal chiefs, village elders, Islamist groups, former military officers from an army disbanded by the U.S. in 2003, and former members of the outlawed Baathist party that governed Iraq under Saddam Hussein.

But now IS is in classic overreach mode, says Kilcullen. Other analysts agree that IS's ambitions will create divisions.

"It will help and hurt" the Islamic State, says Ramzy Mardini, a non-resident fellow at the Washington-based Atlantic Council. Declaring a caliphate "creates uncertainty for the Sunnis that backed" the group, he says. Mardini points out that IS arrived in Mosul in early June with a limited force of around 2,000 fighters. They were prepared to spring prisoners from the jails. They didn't expect the Iraqi army to collapse so quickly.

"They weren't prepared to take over a city of 2 million people," he says.

The caliphate, with deep religious symbolism that harkens back to the early days of Islam, is a recruiting bid to a wider audience, says Mardini.

The brash quest to redraw the map of the Middle East was trumpeted on IS's social media outlets in a video titled "Breaking Borders" and translated into English, Russian, French, German and Albanian.

IS is now calling on Muslims to immigrate, specifically "religious scholars, particularly judges, those with military, administrative and service experience, doctors and engineers."

In One Map, The Dramatic Rise Of ISIS In Iraq And Syria

"They are over-stretched. They need new blood," says Mardini.

For Once, The U.S., Russia And Iran Actually Agree On Something

In Iraq's Sacred City Of Najaf, Clerics Call On Shiites To Fight

The self-declared caliphate had immediate detractors. Rival groups fighting in Syria were the first to speak against the caliphate. IS has already hijacked the Syrian revolt, turning a citizen's rebellion into a terrorist war.

Religious scholars across the region called the caliphate "nonsense." Arabic-language Facebook pages popped up to satirize the elusive IS leader Abu Bakr al-Baghdadi and imaged his rejection of a "friend" request from the al-Qaida boss, Ayman al-Zawahiri. Even al-Qaida considers IS too extreme.

But the reaction of Iraq's Sunni community is a key to the future power of IS.

"In Iraq, 99 percent of the Sunni Arabs don't want to live under a caliphate," says Ali Khedery, who served as a political adviser to U.S. ambassadors and top military commanders in Iraq and the Middle East from 2003 to 2010. He resigned in protest when the U.S. supported Maliki's second term as prime minister.

"Iraqis like to drink, dance, and smoke. They don't want to be ruled by Chechens and Afghans and live under 7th-century standards," Khedery says.

In some IS-controlled neighborhoods in Mosul, masked fighters enforce a radical Islamist code of behavior announced in some mosques and on social media. But other neighborhoods are controlled by local Sunnis who ignore IS edicts.

After an initial exodus of the Christian community, some are returning to Mosul, including the head of Chaldean Church, Archbishop Emil Nona. Many IS fighters have moved on to the front lines, so their presence in limited in Mosul and in the Christian villages in the suburbs of the city.

"I can't say if there is future or not, because we don't know which future we have," says the wary archbishop.

However, IS is "filling a vacuum as the Iraqi state collapses," according to Khedery, the former U.S. adviser.

So far, the Sunni coalition has not publicly split with IS. There is no incentive, says Ramzy Mardini, as long as Maliki is still a contender for a third term in office. Iraq's Sunnis are not yet willing to "take their foot off the accelerator," he says.

The Sunnis believe undercutting IS now would lift the pressure on Baghdad.

But the longer IS remains unchallenged, the stronger is is likely to become, says Mardini.

Take the example of Tikrit. The city was captured in a matter of hours by IS militants on June 11. Soon after, IS posted photographs of the spoils of war after capturing a prison and executing scores of Iraqi soldiers.

"When they first came to Tikrit, it was a bunch of guys in pickup trucks," says Zaid Al-Ali, the author of The Struggle for Iraq's Future and someone who has close family ties in Tikrit.

"Now, they've booby-trapped the whole city," he says. IS brought compressors to dig up the streets and plant bombs on strategic roadways, according to relatives who witnessed the takeover.

IS is growing in strength, says Al-Ali, "The longer Maliki stays in office, the more entrenched they become."