Accessibility links
For Muslims In Gaza, End Of Ramadan Marred By Fighting : Parallels The Muslim holiday Eid marks the end of the holy month of Ramadan and is usually a time for family celebration. This year, it also marks three weeks since the current war in Gaza started.

For Muslims In Gaza, End Of Ramadan Marred By Fighting

For Muslims In Gaza, End Of Ramadan Marred By Fighting 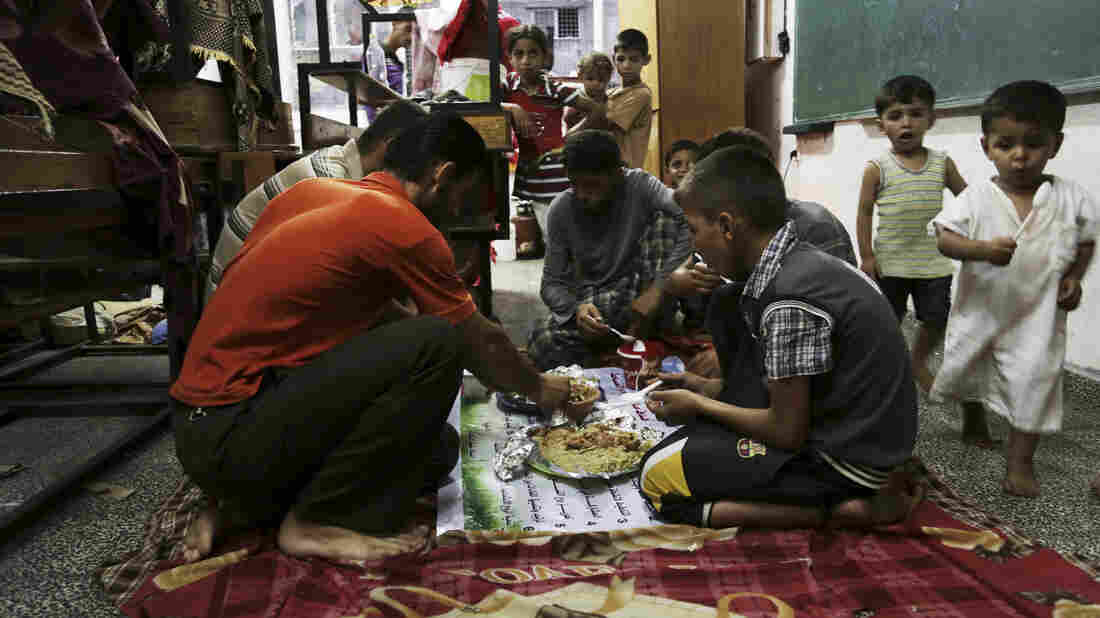 Members of a Palestinian family break their fast with the iftar meal during the holy month of Ramadan at a United Nations school, where hundreds of families have sought refuge after fleeing their homes following fighting between Israeli forces and Hamas. Adel Hana/AP hide caption 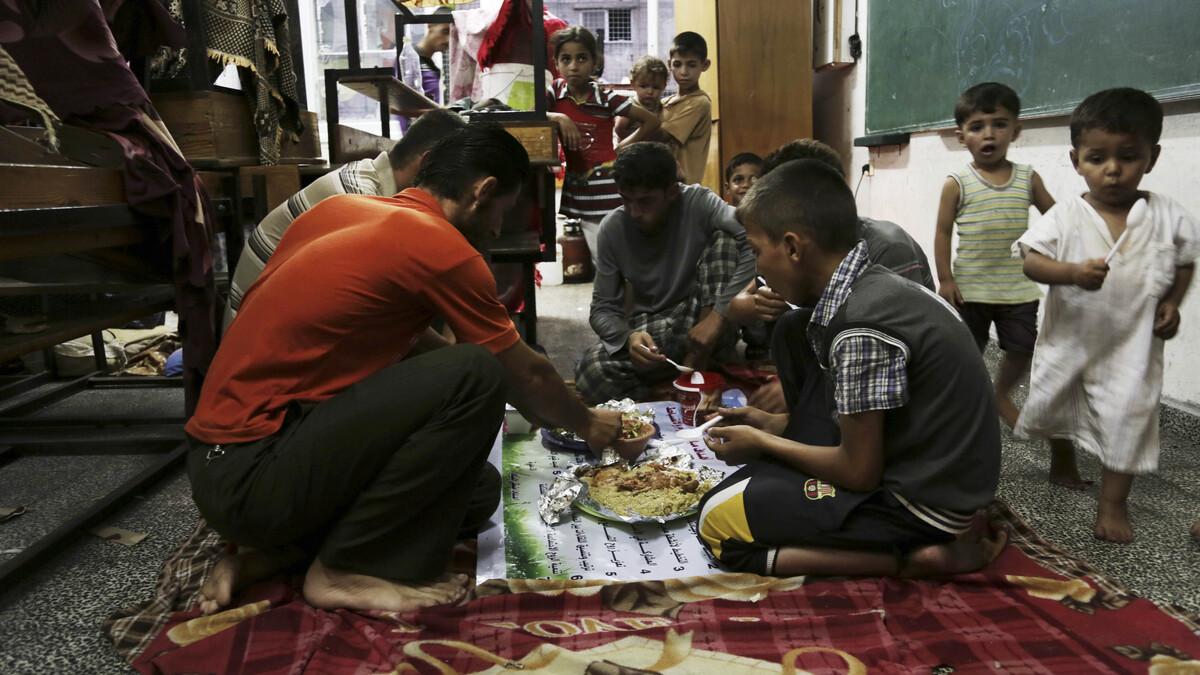 Members of a Palestinian family break their fast with the iftar meal during the holy month of Ramadan at a United Nations school, where hundreds of families have sought refuge after fleeing their homes following fighting between Israeli forces and Hamas.

The Muslim holiday, which began Monday, marks the end of the holy month of Ramadan. This year, it also marks three weeks since the current war in Gaza started.

"My plans were to have no plans for Eid," Ahmed says, pausing in the Firaz market area on a main street in Gaza City. "But my son kept bugging me, 'Mom, aren't you going to buy me something for Eid?' "

Eid al-Fitr is a religious holiday and a family celebration. Relatives offer each other gifts of cash and chocolate. Kids look forward to special cookies and new clothes.

Ahmed's 9-year-old son, Mahmoud, shyly opens up a plastic bag to show off his brand-new Eid outfit: tan pants and a matching shirt. Shoes are next — bright sandals and trendy sports shoes line the window of the shop they're entering.

"The kids are suffering so much," Ahmed says, adding that her brother gave her money for Eid shopping because neither she nor her husband works. "They hear the planes. They don't sleep all night. I just wanted to make a little difference for him."

But on the first day of what is traditionally a three-day holiday, Israeli jets continued their offensive in Gaza, and Hamas militants continued to launch rockets into Israel — despite a call by the United Nations for both Israel and Hamas to implement a humanitarian cease-fire for "the Eid period and beyond." 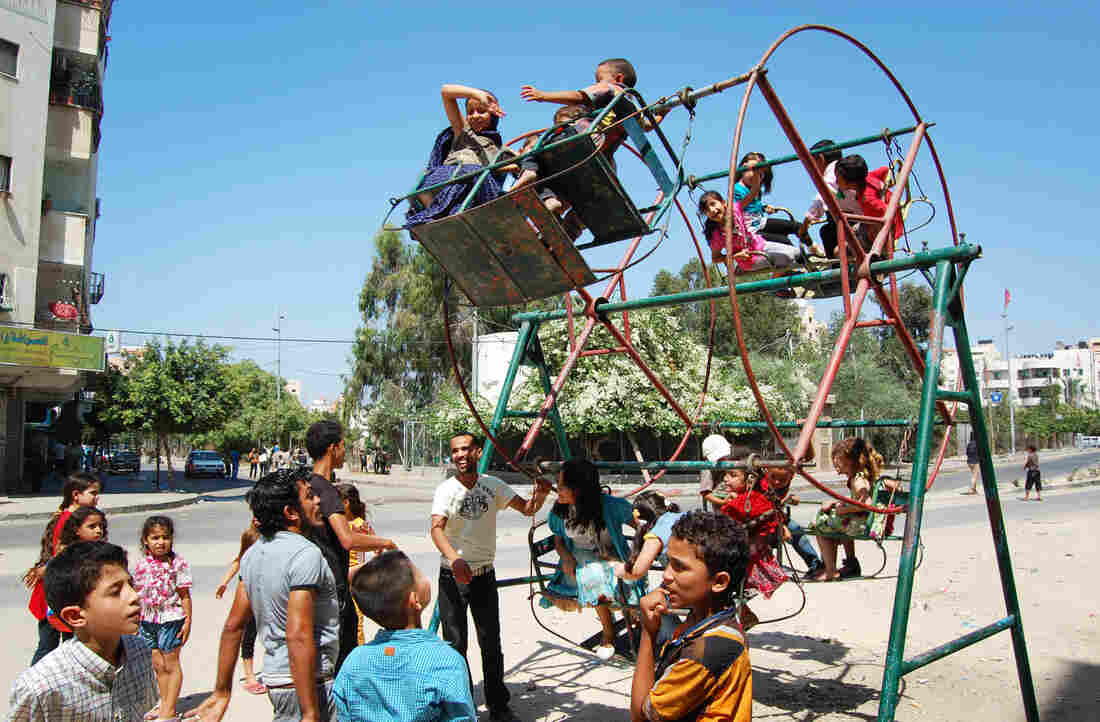 Children ride on a hand-crank Ferris wheel in Gaza City on Monday. The owner says he usually sets it up the last couple of weeks of Ramadan. He set it up much later this year, on the first day of Eid al-Fitr. Emily Harris/NPR hide caption 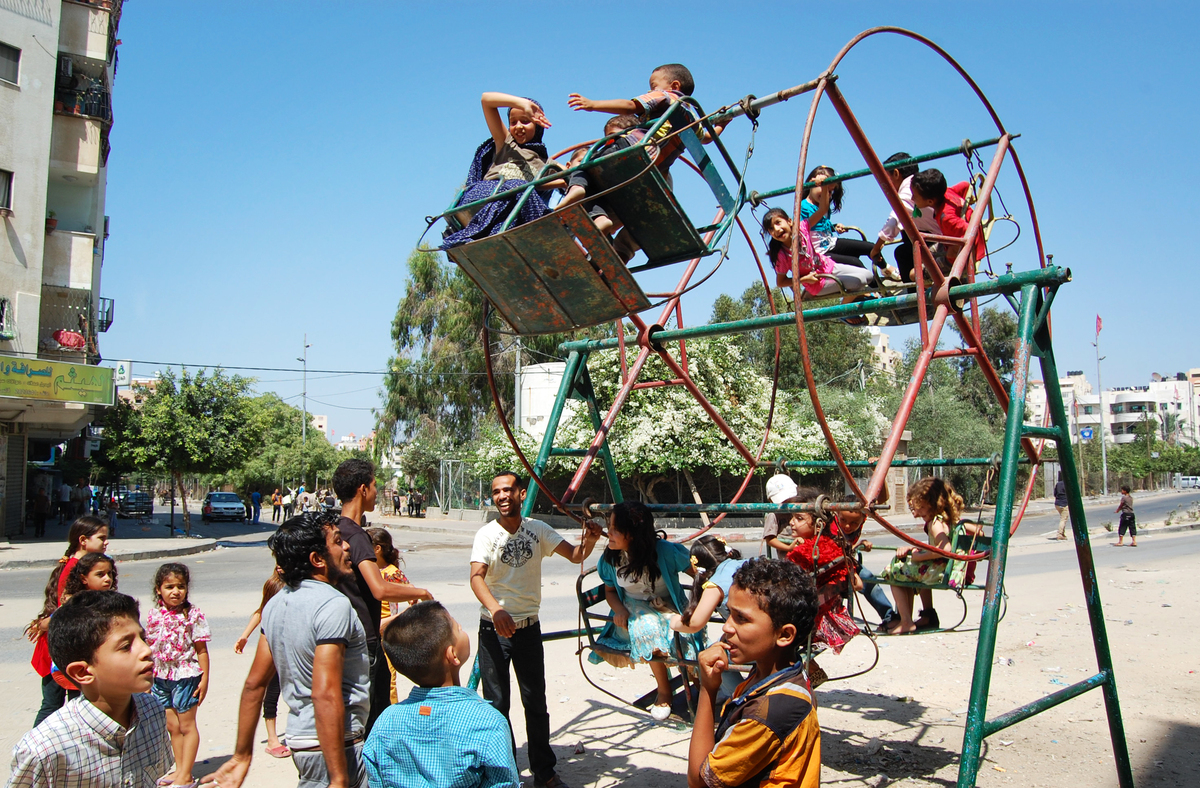 Children ride on a hand-crank Ferris wheel in Gaza City on Monday. The owner says he usually sets it up the last couple of weeks of Ramadan. He set it up much later this year, on the first day of Eid al-Fitr.

As a result, Gazans like Ahmed say they're not expecting to go visiting during Eid. Ahmed's home is crowded with relatives who have fled fighting in their own neighborhoods. With nearby explosions puncturing the air, she acknowledges it might be a risk to shop.

Indeed, few shops were open in Gaza on Sunday, the day before Eid this year — perhaps half as many as usual in the Firaz market section of town. But up and down streets in Gaza, most stores remained closed with tall, metal shutters.

"There is a big difference between Eid this year and last year," says Ali Rajeh, also out buying clothes for his children. "Last year we could enjoy it at least somewhat. This year, as adults, we can't at all. Many of my cousins were injured. I know some people who died. One of my close friends is in the hospital. He'll be there for Eid."

Tens of thousands of other Gazans will spend this Eid in overcrowded classrooms. The United Nations daily head count shows 9 percent of Gaza's population has taken refuge from the war in agency-run schools. U.N. officials say they aren't distributing any special Eid treats. They're barely keeping up with basic demands.

Much of that food is brought in through Israel, via the sole commercial crossing. Unfortunately for U.N. logistics, Kerem Shalom is near the border with Israel and has been closed periodically owing to fighting around it.

By special agreement between Israel and the Palestinian Authority, the crossing will be open on Eid, Anderson says.

"The government of Israel has done a lot to try to keep it open," he says. "But I prefer to have redundancy."

Merit Heitanen, who coordinates water deliveries to schools, worries about Eid. Many adults fast all day during the preceding month, not even sipping water.

"After Ramadan finishes, how much more will people be drinking?" she wonders. Already some schools have run out of water after two deliveries a day.

During a 12-hour cease-fire on Saturday, thousands of people who had left their homes for safety rushed back to pick up mattresses, clothing and cooking pots. Their focus was on survival rather than celebration. Hamas rejected a cease-fire extension proposed by Israel early Sunday — but then suggested a cease-fire itself the same afternoon, in part citing Eid.

"Based on a U.N. request and because of the circumstances our people face and the holiday of Eid, the resistance factions have agreed to a humanitarian cease-fire for 24 hours," said Hamas spokesman Sami Abu Zuhri in a statement.

Despite clashes Monday, U.N. Secretary-General Ban Ki-moon is calling on all parties "to prolong the suspension of the fighting for an additional extendable period of 24 hours to allow vital humanitarian efforts to continue." He reiterated his demand for "a durable cease-fire that could set the ground for the start of comprehensive negotiations."

Ali Rajeh, the father buying his children clothes Sunday, hasn't been following cease-fire politics. He says he told his children to just expect the worst during this war.

"I'm expecting the worst," he says. "I'm telling my kids we might get bombarded in our house, even before reaching Eid. Security or safety are like canceled concepts for them because of what is going on."