Accessibility links
When And How To Die: Germany Debates Whose Choice It Is : Parallels German courts have supported some types of assisted suicide, but the ruling party has vowed to stop doctors and organizations it says are profiting from the practice. 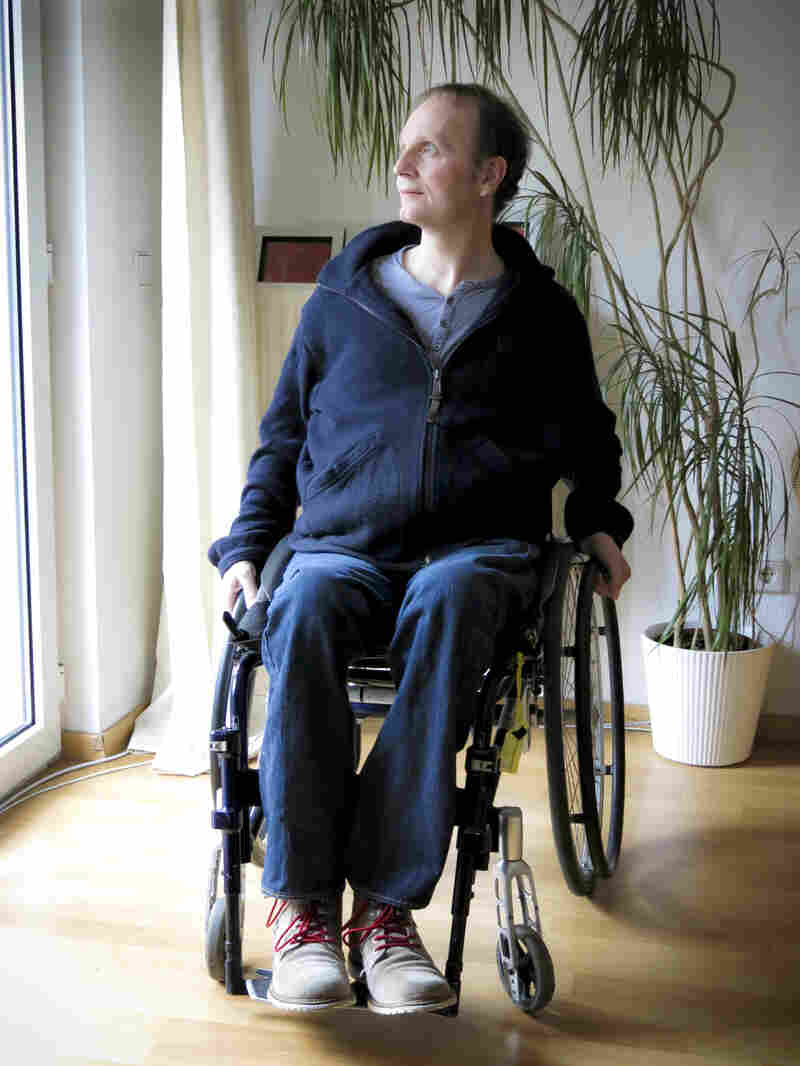 Stefan Daniel is a 51-year-old German clinical psychologist with multiple sclerosis. He has decided that he will end his life, by taking a barbiturate while sitting in his own living room, when he can no longer see or speak. Esme Nicholson for NPR hide caption 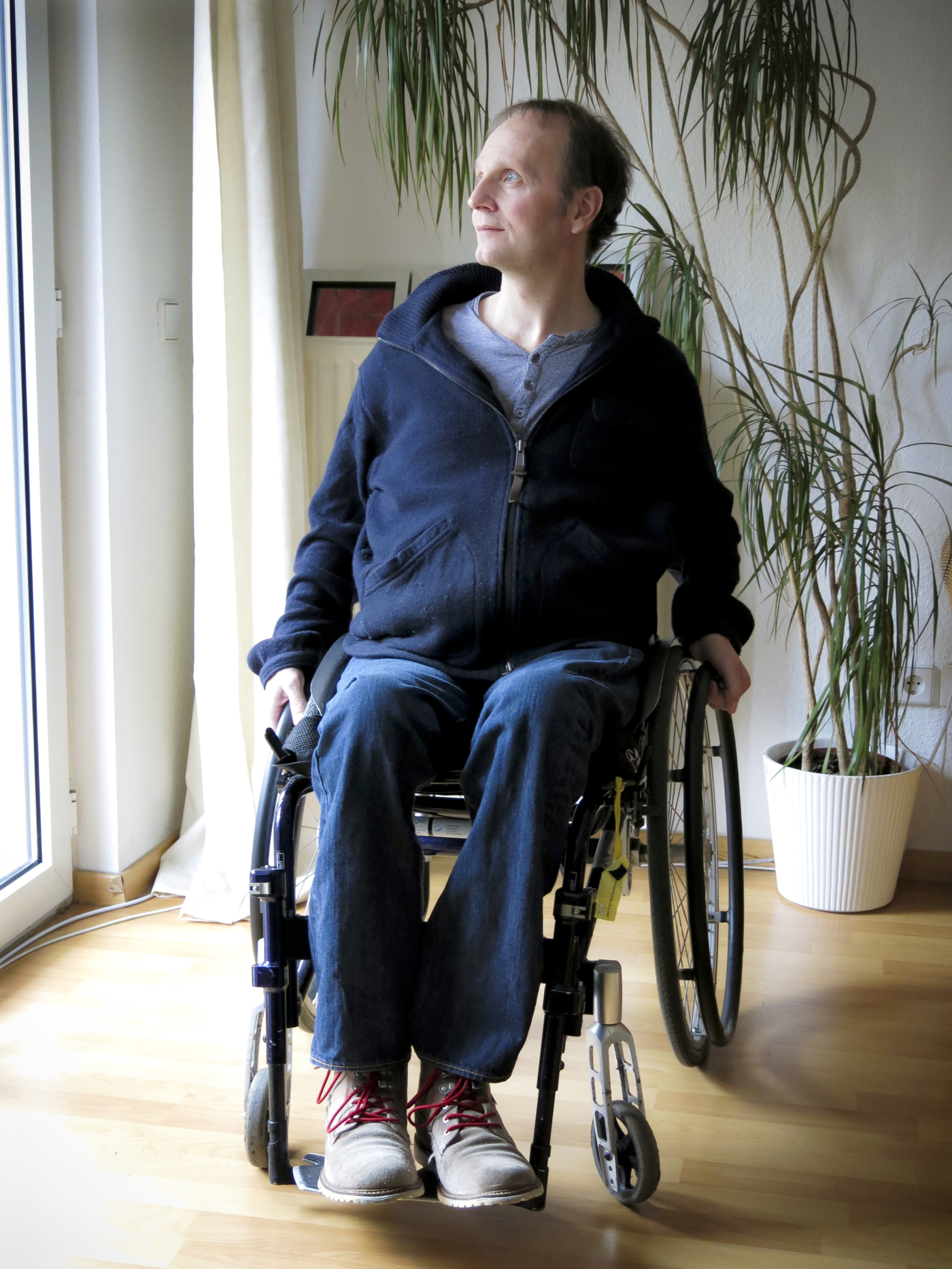 Stefan Daniel is a 51-year-old German clinical psychologist with multiple sclerosis. He has decided that he will end his life, by taking a barbiturate while sitting in his own living room, when he can no longer see or speak.

Stefan Daniel says he has no control over the multiple sclerosis that is short-circuiting his body.

The disease, which attacks the nervous system, has forced the 51-year-old German psychologist to give up his career and most hobbies, including running and photography.

He spends his days in an electric wheelchair and rarely ventures out of his Berlin apartment.

"It's so difficult for me to open the door," he laments.

A caregiver comes to his home four times a day to help him with meals, cleaning and the growing number of other tasks he can no longer do himself.

But there is one thing that Daniel refuses to relinquish to his illness: the choice of how and when he will die.

"I've seen a lot of people with MS and who are not able to get out the bed, and this is no life, not for me," he says in a slow and soft voice that is indicative of the disease. He smiles when asked how he feels about his decision.

"There is only one word in me — freedom," he says.

Daniel is one of many Germans who are opting for euthanasia or assisted suicide to end their suffering. Experts and officials in Germany say it could be hundreds, possibly thousands — no one knows for sure.

That's in part because assisted suicide is a murky legal question in Germany. Killing terminally ill patients directly, even if they request it, is illegal in the country. Prescribing certain barbiturates used for euthanasia in other countries is also illegal in Germany. But prescribing other drugs to terminally ill patients and then letting them ingest or inject those medications is permitted.

Calls For A National Debate

Merkel's Christian Democratic Union political party has vowed to stop organizations and doctors it claims are profiting from vulnerable patients seeking to kill themselves. Euthanasia foes are also concerned that Germany is surrounded by countries with pro-euthanasia and assisted suicide laws, some of which are being broadened.

Switzerland, for example, allows foreigners in certain circumstances to come to the Alpine country and seek doctors' help in ending their lives. Detractors say Germans account for up to half of this so-called "suicide tourism."

The Belgian Parliament earlier this year passed a bill allowing euthanasia for terminally ill children without any age limit, making it the first country to permit the practice for children under 12.

Michael Brand, who is coordinating the CDU and its allies' efforts on the ban in the German Parliament, says what the Belgians did amounts to "declaring their society bankrupt."

"We aren't fundamentalists, but rather are looking for a modern and humane answer for ... the most difficult question," he says.

A Sensitive Question In Germany

Brand adds that the question of assisted suicide is particularly sensitive in Germany because of his country's Nazi history and the Holocaust.

"We live in a society where everyone today is productive, fit and healthy," Brand says. "We need to be careful not to put pressure on those who are nearing the end of their lives, who are sicker, who are disabled. Who has the right to decide what life is worth living or not?"

Christian Arnold, a retired German urologist who says he has assisted scores of terminally ill Germans seeking euthanasia, says that patients — and not the government — should be making that decision.

Arnold adds that he and other doctors offer the patient seeking euthanasia a variety of alternatives, including palliative or hospice care, pain management through medication and other therapies. But if, after everything, they still choose help in killing themselves, then their wishes must be respected, he says.

Elke Baezner, who is president of the German Society for Humane Dying, agrees. She says that she understands politicians' desires to protect vulnerable patients from unscrupulous individuals or groups seeking to take their money, but that dragging out patients' care against their will at great expense is also abuse.

"Our goal is to find a safe, secure way for people who want to die to be able to do so peacefully and without pain," Baezner says.

Daniel — the psychologist with multiple sclerosis — says he's following the debate in his country with trepidation, but that, ban or not, it won't change his resolve. He has planned every detail of his final hours, which he has decided will come when he can no longer see or speak.

He says he will put on a soundtrack from a favorite movie — he doesn't know which one yet, but it will be one featuring American actor Jeff Bridges — and sit on his living room couch with his girlfriend at his side.

Daniel's last act will be to lift a glass containing a barbiturate he has purchased online, drink the concoction and drift off to sleep.