Accessibility links
Autobot$ Rule: Why Transformers 4 Is China's Box Office Champ : Parallels Transformers: Age of Extinction hauled in more than $300 million to become the country's all-time top-grossing film. A loyal and nostalgic fan base and action set in China help explain its popularity. 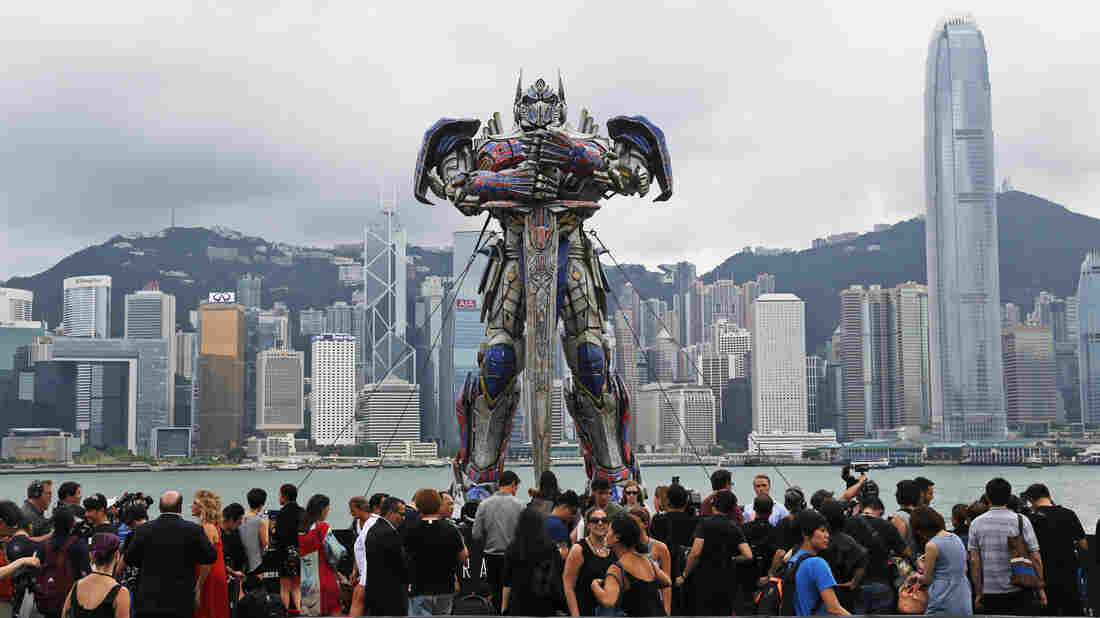 People gather in front of a giant figure of Optimus Prime displayed along the Hong Kong harbor for the world premiere of Transformers: Age of Extinction on June 19. Kin Cheung/AP hide caption 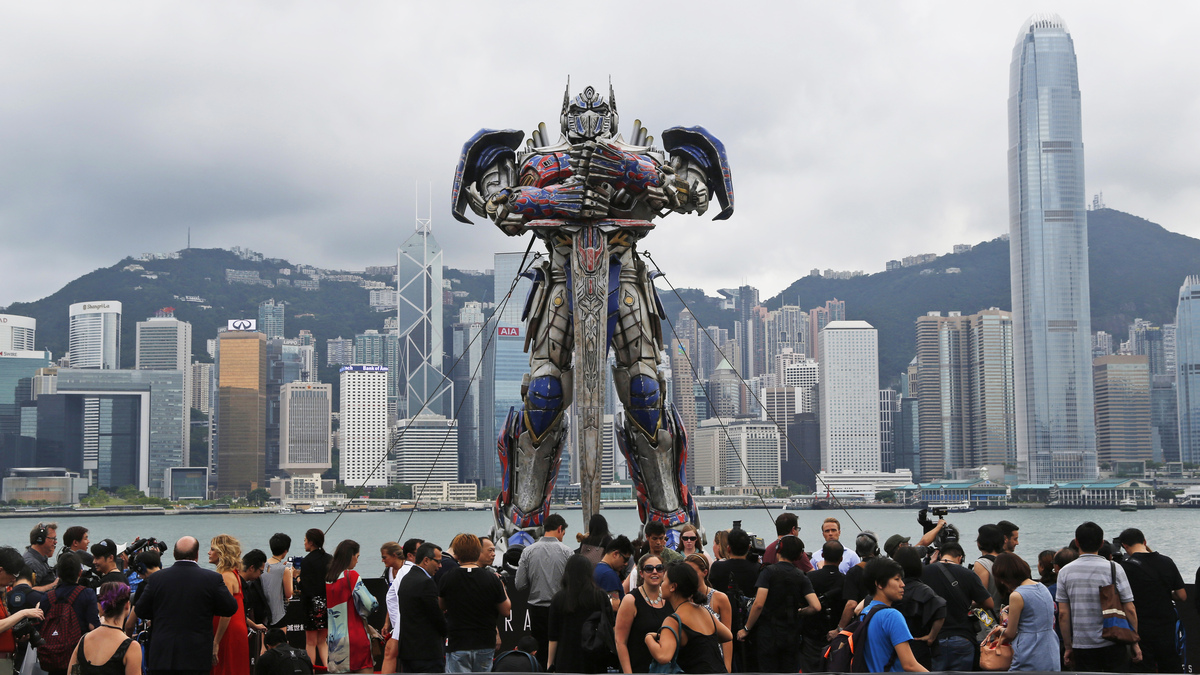 People gather in front of a giant figure of Optimus Prime displayed along the Hong Kong harbor for the world premiere of Transformers: Age of Extinction on June 19.

This summer, Age of Extinction, the fourth installment in the Transformers series, demolished box office records in China, the world's second-largest film market behind the U.S.

Although the movie got poor reviews on both sides of the Pacific, it managed to unseat China's former top-grossing film, Avatar, and haul in more than $300 million. People like Wang Yitao, a 32-year-old Shanghai government worker, are a big reason why.

Wang remembers the moment he saw his first Transformers action figure. It was 1990. He was 8-years-old and the toys were on sale at the No. 1. Department Store on Nanjing Road, the city's famed shopping street.

"Before in China, we didn't have toys like this," says Wang, his eyes widening in wonder as he returns to the memories of his childhood. "I felt they were so magical. I held on to my parents, refusing to leave the counter no matter what, pleading with them to buy me one."

The most expensive Transformer back then cost Wang's mother the equivalent of a week's salary at the state-run auto parts factory where she worked. In all, Wang collected more than 50 Transformers and kept them in a box under his bed. Every time Hasbro released a new one, it became the talk of the classroom. So, when a new Transformers movie comes out these days, Wang can't resist.

"At least in Shanghai, I can guarantee every man in my age group would go to the movie theater to see the movie," says Wang, a burly man, who wore a black T-shirt, blue jeans and sandals. "Their choices are: go by themselves or drag their girlfriends or wives." 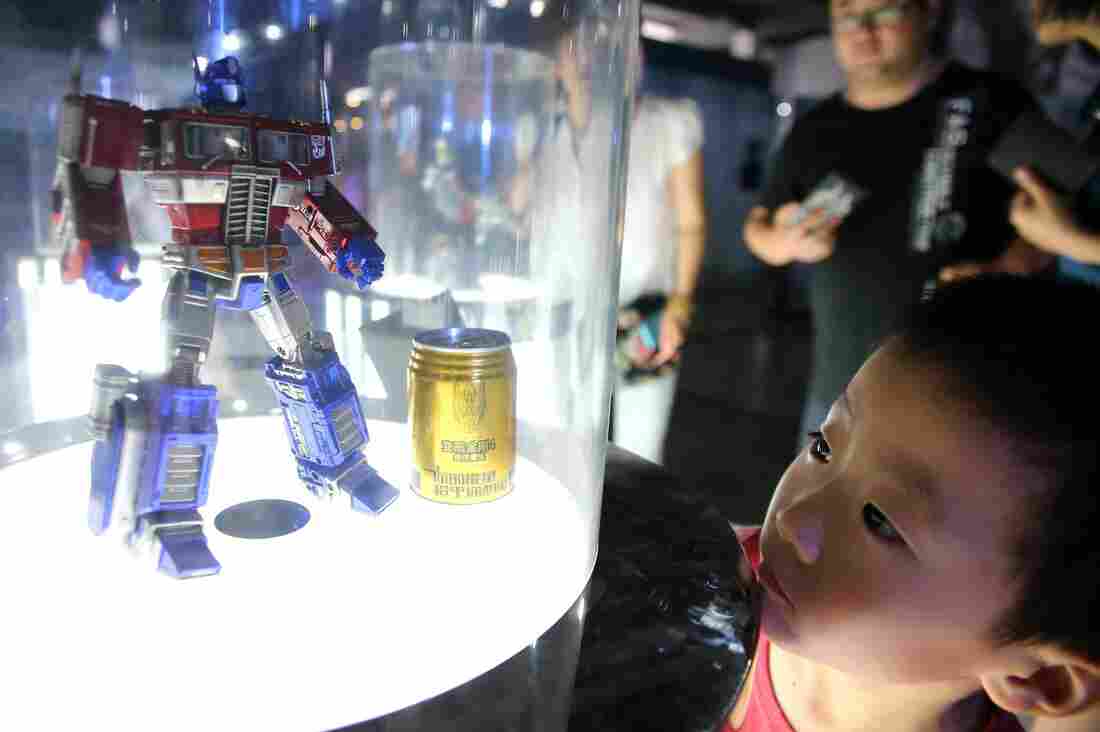 A boy looks at a toy model of Transformers character Optimus Prime on display at a Transformers Model Show in Qingdao city in northeast China. Wu Hong/EPA/Landov hide caption 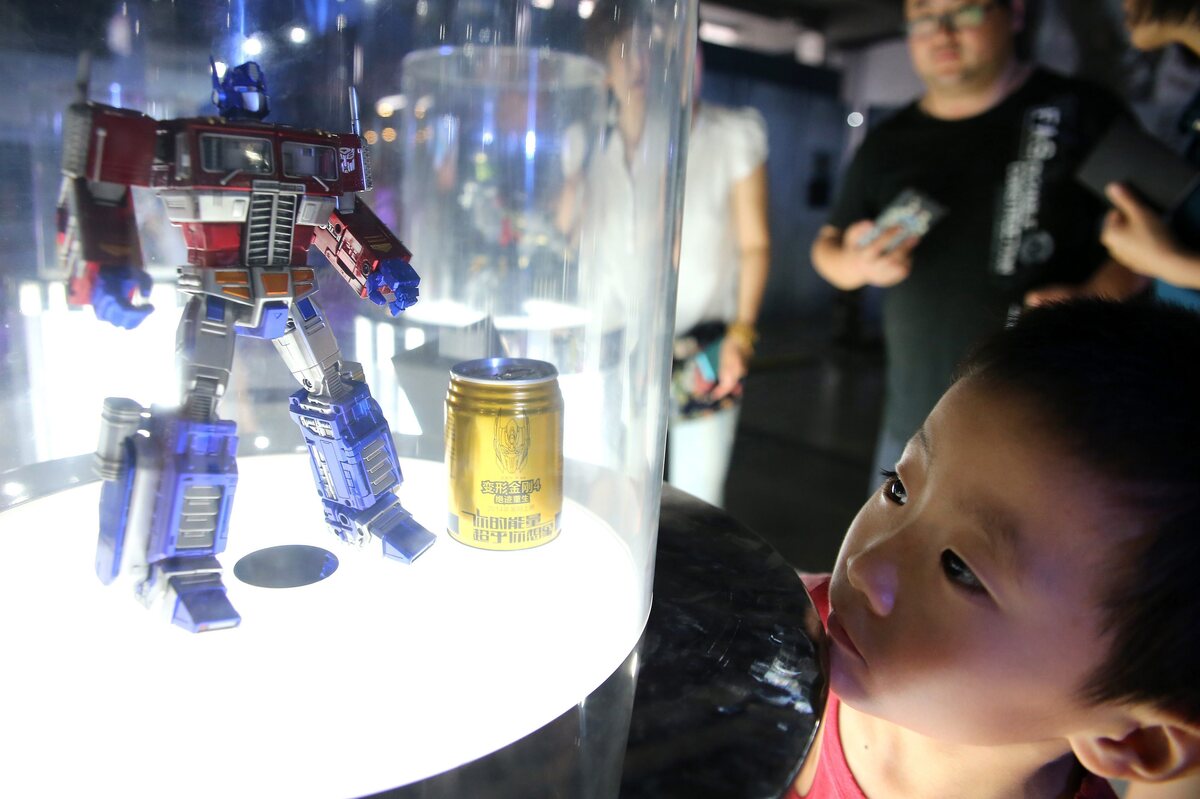 A boy looks at a toy model of Transformers character Optimus Prime on display at a Transformers Model Show in Qingdao city in northeast China.

Beyond a huge, built-in fan base, another reason Transformers did so well in China is because the final third of the film was shot there — unheard of for a Hollywood, summer blockbuster. The movie features a few Chinese stars as well as shots of the Great Wall and an extended fight scene that destroys much of Hong Kong. Yin Hong, a professor of film and television at Beijing's Tsinghua University, says that calculated marketing paid off.

"Hollywood realizes that by adding these China elements, the movie can indeed achieve huge success in the Chinese market," says Yin.

Savvy marketing, though, is no substitute for good storytelling. Yin points out that the movie lurches across China with little narrative logic, culminating in an epic, seemingly interminable battle.

"One moment, they were on the top of buildings; another, they run to the top of hills in southern China," says Yin. "There was little coordination of scenes, so it appeared chaotic."

Move Over James Bond, China Has An Unlikely Box-Office Champ

Another reason the movie spends so much time in China is to provide opportunities for Chinese product placement, much of which Chinese movie-goers ridiculed.

In one scene, actor Stanley Tucci, playing a billionaire inventor, is running from CIA assassins. He pauses on a Hong Kong roof top, opens a refrigerator and drinks a cardboard carton of Yili, a Chinese brand of milk.

In another scene, Mark Wahlberg, the movie's other lead actor, tries to get money out of a China Construction Bank ATM — in Texas.

There's even a plug for the Communist Party. Hong Kong is a semi-autonomous region, where many are pushing for democracy, which infuriates China's authoritarian leaders in Beijing. So, when an alien spaceship threatens Hong Kong's skyline, one local official says there's only one place to turn: "We've got to call the central government for help."

"Look, it's a really complicated task to make a film that works for the international audience and also for China," says Rob Cain, who runs Pacific Bridge Pictures, a Santa Monica-based firm, which works on co-productions with Chinese film companies.

"You have to meet all sorts of censorship rules," Cain continues. "You have to satisfy the desires and the whims of the government officials who are responsible for the film industry and so decisions get made in a way that suits their needs, but they may be antithetical to the desires and needs of the movie-going audience there."

But with Transformers' record-breaking performance and Chinese ticket sales on track to become the world's largest, Hollywood studios will be searching for more and more ways to get their movies into this market.