Accessibility links
The Man Who Might Be Iraq's Next Prime Minister : Parallels Haider al-Abadi, a prominent politician for the past decade, has been nominated as prime minister. But a potential confrontation looms with Nouri al-Maliki, the man who's had the job for eight years.

The Man Who Might Be Iraq's Next Prime Minister

The Man Who Might Be Iraq's Next Prime Minister 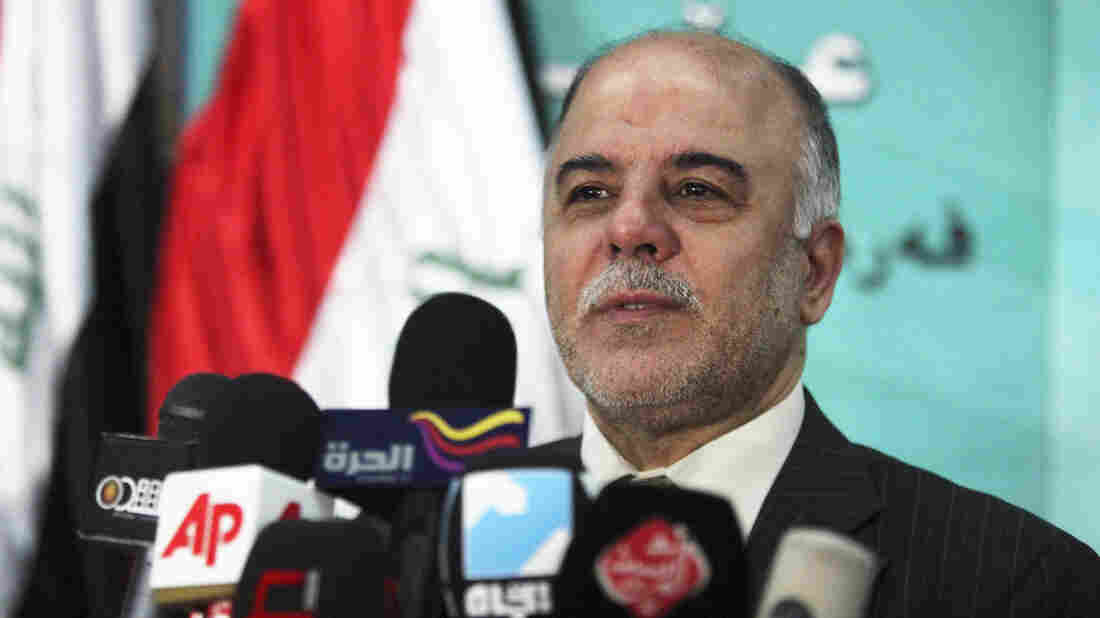 Iraqi lawmaker Haidar al-Abadi, shown here in 2010, was appointed Monday to become Iraq's prime minister. However, Nouri al-Maliki, the prime minister since 2006, has so far refused to step down. Karim Kadim/AP hide caption 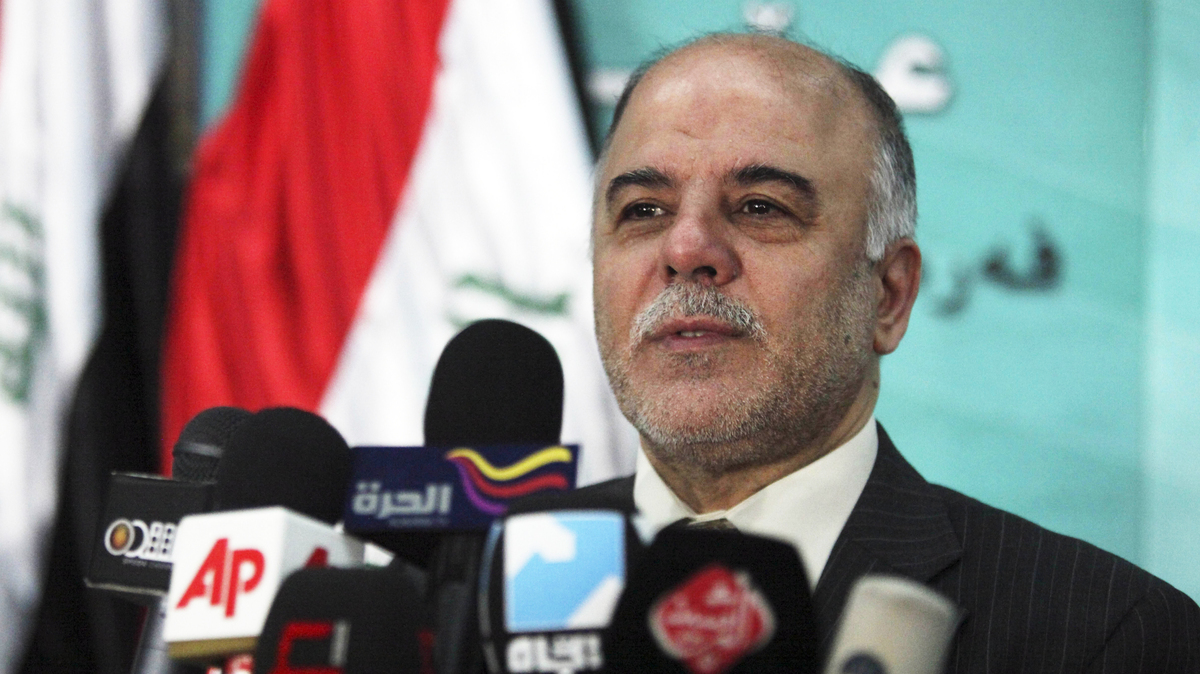 Iraqi lawmaker Haidar al-Abadi, shown here in 2010, was appointed Monday to become Iraq's prime minister. However, Nouri al-Maliki, the prime minister since 2006, has so far refused to step down.

Haider al-Abadi is an affable Shiite politician who has been close to the center of power in Iraq since the U.S.-led invasion in 2003. He may soon be the most important political figure in the troubled country.

Iraqi President Fuad Masum, whose position has traditionally been ceremonial, on Monday nominated Abadi to be prime minister, a job that requires him to form a new coalition government based on parliamentary elections that were held in April.

There are countless obstacles facing Abadi, and in the short term, the greatest is that Nouri al-Maliki, the prime minister since 2006, has refused to step aside.

Maliki sent tanks into the streets of Baghdad on Monday in an apparent attempt to make his power visible and said that Abadi's appointment threatens the country's constitution.

Under that constitution, the president appoints the chosen nominee of the largest parliamentary bloc to form a government. And Abadi certainly has solid credentials — he's the deputy speaker of Parliament and his coalition won the most seats in the parliamentary vote. A majority of members of that National Alliance, the largest Shiite political bloc, said they would support him.

But that same bloc also includes Maliki, who gave a defiant speech Monday night after Abadi's appointment was announced. Maliki, who has continued to serve as a caretaker prime minister since the April voting, has amassed control over much the country's security forces.

President Obama called to congratulate Abadi, and European leaders also expressed their support. To formally become prime minister, Abadi would need to form a Cabinet and receive approval from Parliament.

New Leader Of Iraq Is Nominated, But Maliki Insists He'll Stay In Office

This Isn't The First U.S. Rescue Operation In Northern Iraq

But Maliki has made it clear that he wants another four-year term and has resisted all previous calls to step down from international leaders and Shiite clerics in Iraq.

Many Years In Exile

Abadi is a genial electrical engineer in his early 60s who often served as an intermediary for diplomats and Western journalists in Baghdad. He was comfortable in the role, having been educated in England and serving as the British representative of the Dawa party, a Shiite Islamist group, when it was in exile during the era of dictator Saddam Hussein.

Abadi's prominence in Dawa gives him credibility with the country's Shiite majority. Dawa was formed in the 1950s among Shiite intellectuals following the direction of a respected cleric.

The party fought Saddam, who authorized the executions of thousands of its members.

And while Maliki was working in low-level education bureaucracies in Iraq and on underground activities from Iran and Syria, Abadi was a Dawa spokesman in Britain, where he earned a doctorate and received a broad view of the world.

But Dawa is a religious and mainly sectarian party, especially after years of divisive leadership by Maliki. That could scare off Sunni Arabs and Kurds whose support would be needed for a genuinely broad-based government. That backing would also be essential to halting and reversing the offensive by the Islamic State, the militant group that has captured much of northern and western Iraq.

A Call For Compromise

It's not clear whether Abadi or anyone else can be a bridge builder among Iraq's feuding groups. But he is viewed as less combative than Maliki, and in a June 22 interview in Baghdad with NPR's Alice Fordham, he stressed that to confront the insurgents, Iraq's politicians need to compromise.

"They have to unite. Our country is under threat and regardless of whose fault it is, we are all under threat," he said. "This is not internal politics. This is terrorism against the state. Against normal people. So we have to face up to it."

When asked if Maliki was to blame for the divisions that enabled the Islamic State's rapid advance, Abadi noted that Kurdish and Sunni leaders have also stoked the insurgent fires with sectarian declarations.

"Everybody is weaker than before, now," he said. "The only strength we can get is by being together." He cited the common denominator of turning back the militant threat, saying, "We have to climb down, everybody, all groups, so we come to a middle road. And what's unifying us is defending the country."

Open To Help From Iran

He was also asked about what role Iran might play in Iraq. Dawa has had a contentious history with Iran, but it exerts heavy influence over Maliki's government.

Abadi said Iraq needed help anywhere it could get it — including from Iran. At the time, the U.S. had sent advisers to Iraq but had not started the airstrikes or aid drops that are currently underway in the country's north.

"We may call for the Iranians to help if the Americans can't," he said. He implied that Iran had even offered ground forces to Iraq but said his country only needs air cover.

Abadi was asked whether Iraq should be partitioned among Kurds, Sunnis and Shiites. He said that could lead to ethnic cleansing in Iraq's many mixed areas.

"It may be very nice and easy on the map. On the ground it will lead to disaster and catastrophe," he said. He warned that the violence could bring Turkey, Iran and even Jordan into a war for their proxies in Iraq.

Asked whether he was a contender for prime minister, Abadi said last month, "I never put myself forward. But if the necessity is there, I'm prepared to accept the responsibility."