Accessibility links
A Surge Of Migrants At The Border ... Of Spain : Parallels Spain is dealing with its biggest migration crush in decades. More than 1,200 people this week alone have landed on the country's Mediterranean coast in flimsy rafts and boats. 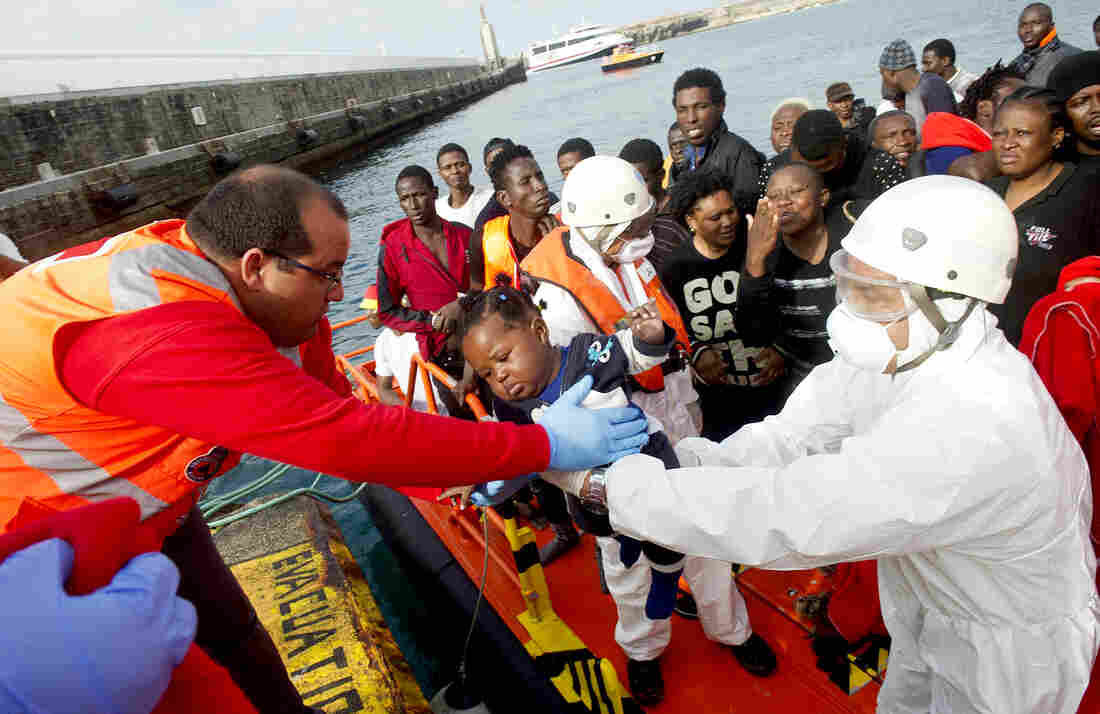 An African migrant infant is handed off by a member of the Red Cross to a member of the Spanish coast guard in the port of Tarifa on Tuesday. Marcos Moreno/AFP/Getty Images hide caption 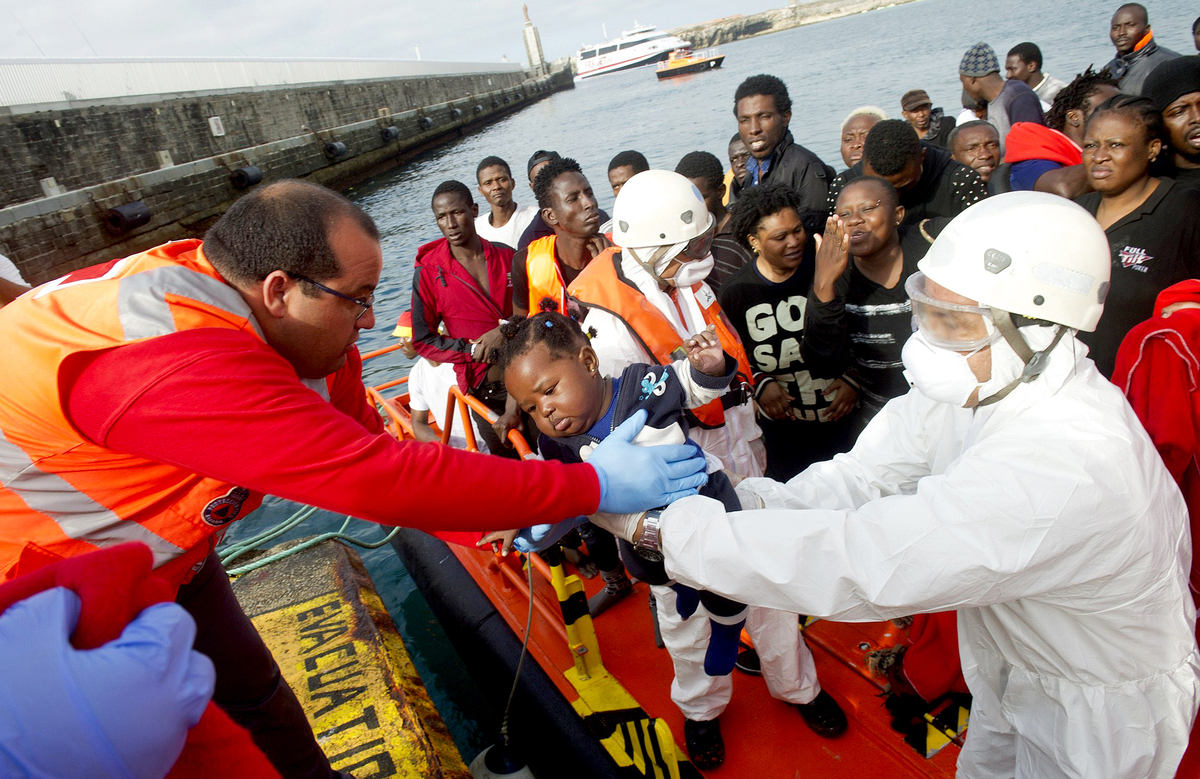 More than 1,200 African migrants have landed in Spain on rubber rafts or flimsy boats in recent days. Many of them are women and children, now in Red Cross shelters packed beyond capacity. At one such facility with 500 beds, there are 1,200 temporary residents.

It's been the biggest mass migration push into Spain in decades.

Spain is the closest European country to Africa; just 9 miles of choppy waters separate Spain's southern tip from Morocco, at the mouth of the Mediterranean. It also has Europe's only land borders with Africa, at two Spanish territories called Ceuta and Melilla on the North African mainland, bordering Morocco.

Ceuta and Melilla's fortified frontiers are the scene of frequent clashes between Spanish border guards and African migrants fleeing war and poverty — desperate to reach Europe. Many are from sub-Saharan Africa and travel across the entire African continent — stopping to work odd jobs along the way, to pay smugglers to help them cross each border. For some, the journey takes years. 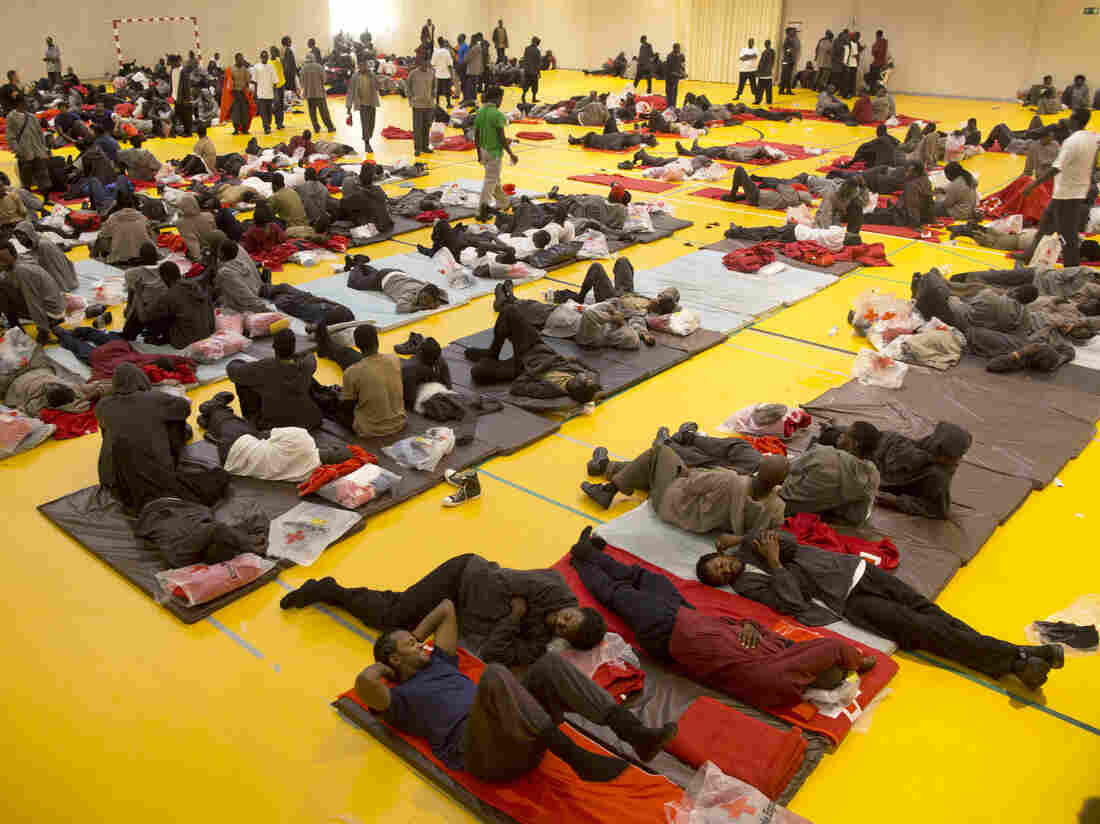 African migrants rest inside a sport center on Wednesday in Tarifa, Spain. Temporary shelters for the migrants are packed beyond capacity. Sergio Camacho/Getty Images hide caption 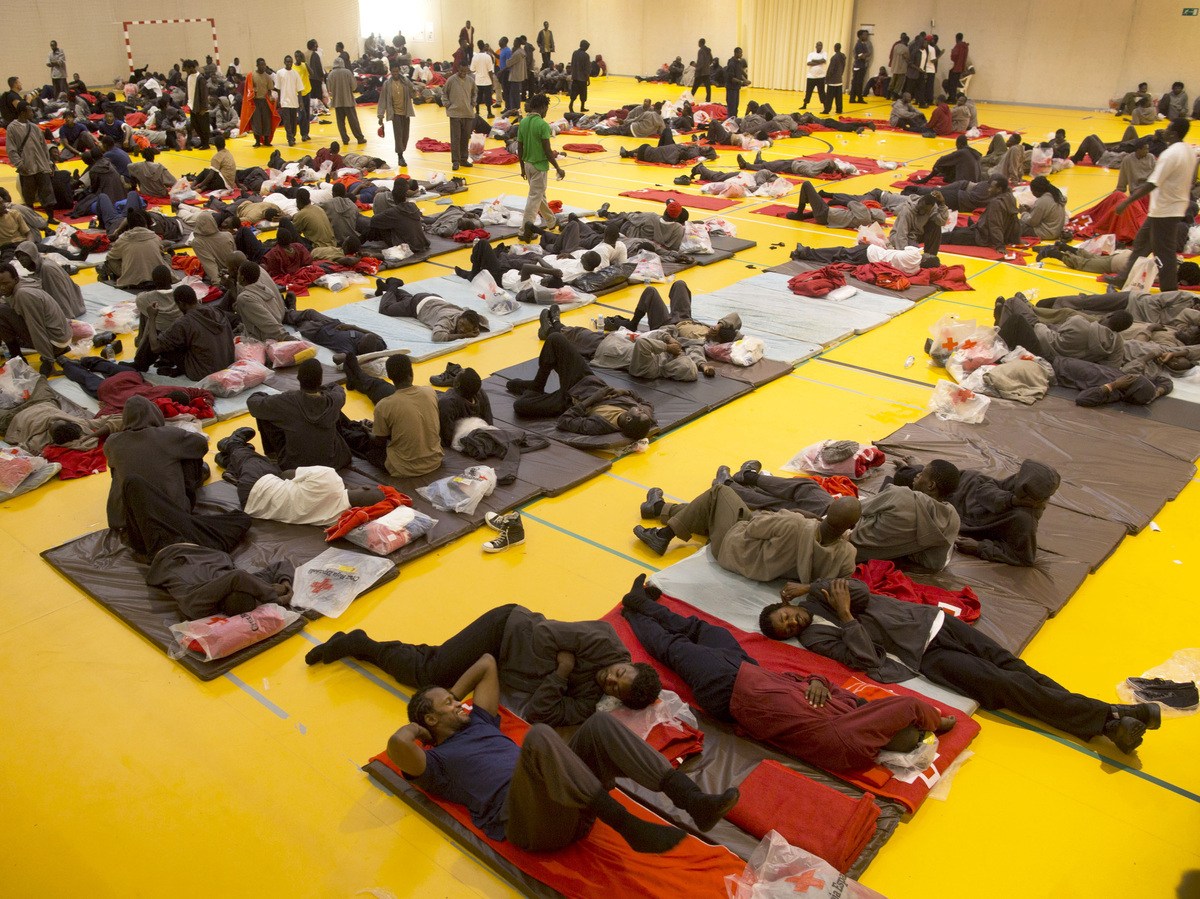 African migrants rest inside a sport center on Wednesday in Tarifa, Spain. Temporary shelters for the migrants are packed beyond capacity.

It's a similar drama to the one that plays out on the U.S.-Mexico border, where thousands of people, many of them small children, alone, make a dangerous journey north to escape conflicts in Central America.

Among those arriving in Spain this week was a months-old baby girl, discovered alone in a flotilla of inflatable rubber rafts intercepted by Spain's coast guard. She's being taken care of by Red Cross staff who named her "Princess" and are searching for her parents.

The recent influx of African migrants into Spain is thought to be because of unusually calm waters this week in the Strait of Gibraltar, the narrowest point between Africa and Europe. It's also after the Muslim holy month of Ramadan, which ended in late July. Muslim migrants have finished fasting and have begun anew their journeys northward.

But it's also because of an apparent security lapse on the Moroccan side. On Wednesday, Morocco's interior minister admitted to what he called "dysfunctions" in the Moroccan coast guard, which usually patrols the coast, stopping boats filled with migrants taking off toward Spain.

According to aid workers, some of the migrants who landed in Spain this week have said the Moroccan patrols simply disappeared Monday and Tuesday.

Meanwhile, Spain has sent an additional 500 border guards to the area.

In addition to this week's arrivals by sea, some 1,600 migrants have tried to scale fences that separate Morocco from Spain's North African enclaves. Many of them couldn't get across, since Spain recently fortified the fences with anti-climbing mesh.

But on Wednesday, about 80 men managed to climb it, and got stuck atop a three-story-high fence, with border guards watching below, poised to grab them. After more than 10 hours in the August heat, they were helped down to safety — dehydrated and weak, but alive. 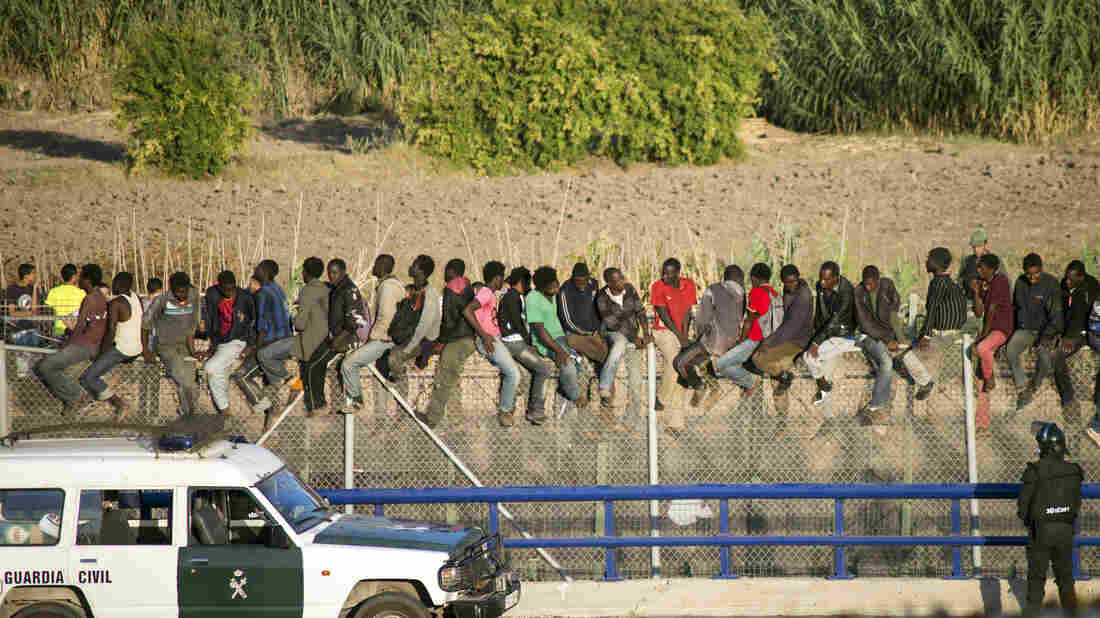 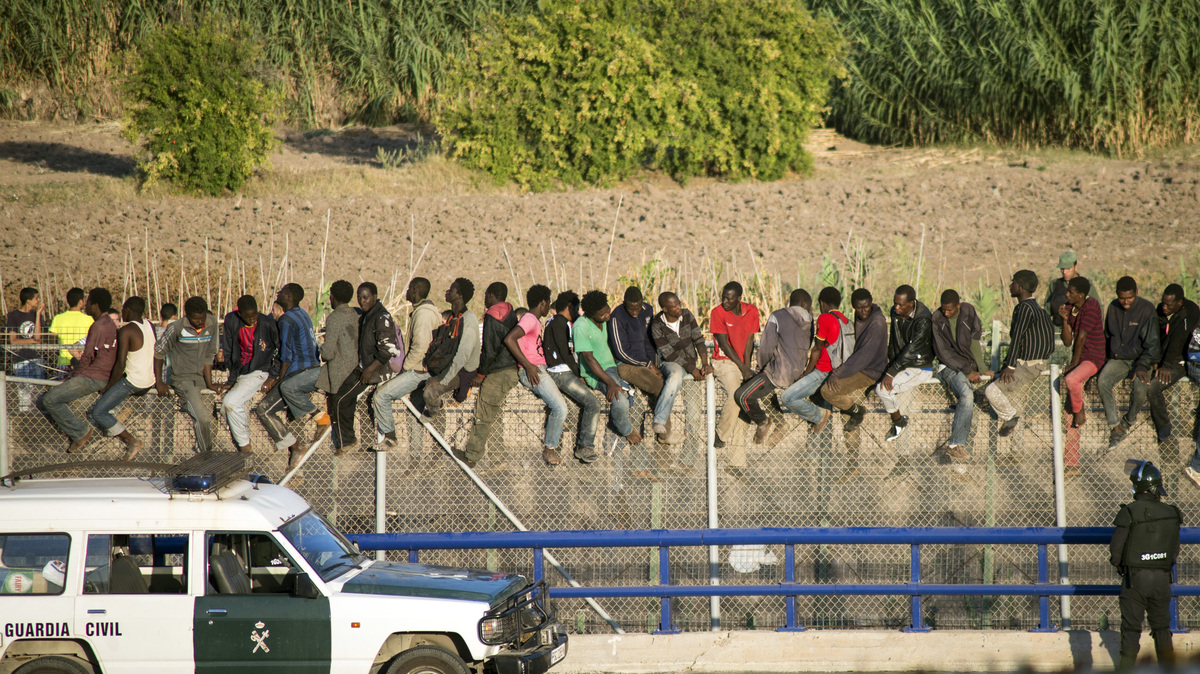 African migrants climb a border fence between Morocco and Spain's North African enclave of Melilla on Tuesday as Spanish civil guard officers stand under them.

What happens to the migrants once they arrive in Spain depends largely on their nationalities. If they're Moroccan, Spain deports them back immediately.

But the majority of Africans arriving in Spain are from sub-Saharan Africa. Many of them get rid of their identity cards and papers on their long trek across the Sahara, or throw them into the Mediterranean, so that Spanish border guards can't tell where they're from. Others refuse to speak, so that authorities can't hear their accents or languages.

If Spanish authorities can't figure out where a migrant is from, he can't be deported. If a woman gives birth in Spain, she can't be deported without her infant — who has residency rights. As a result of this policy, many of the flimsy rafts that land on Spanish shores are laden with pregnant women hoping to give birth on Spanish soil.

Aid workers and advocates for asylum-seekers in Spain predict that the flow of migrants won't lessen until politicians address the problem of gross economic inequality between Africa and Europe. That's a daunting task, especially amid Europe's economic crisis.

Spain's economy is no longer in recession. But the unemployment rate remains at 26 percent; it's more than 50 percent for people in their 20s. Young college graduates in Spain are competing for unskilled jobs in restaurants or in construction for which, a decade ago, they would have been over-qualified. And now there's an influx of African migrants joining that applicant pool.

Spain doesn't have an influential far-right anti-immigration movement in politics like some other European countries. But racism has nevertheless spiked amid the economic crunch and arrivals of many Africans.

Like many other southern European nations, Spain's tactic so far has been to try to tamp down those arrivals by fortifying its borders. But Amnesty International recently criticized Madrid for spending 30 times more on border security than on aid to asylum-seekers.

Spain has also asked the European Union for help, saying this is not the responsibility of front-line countries — it's a European issue.