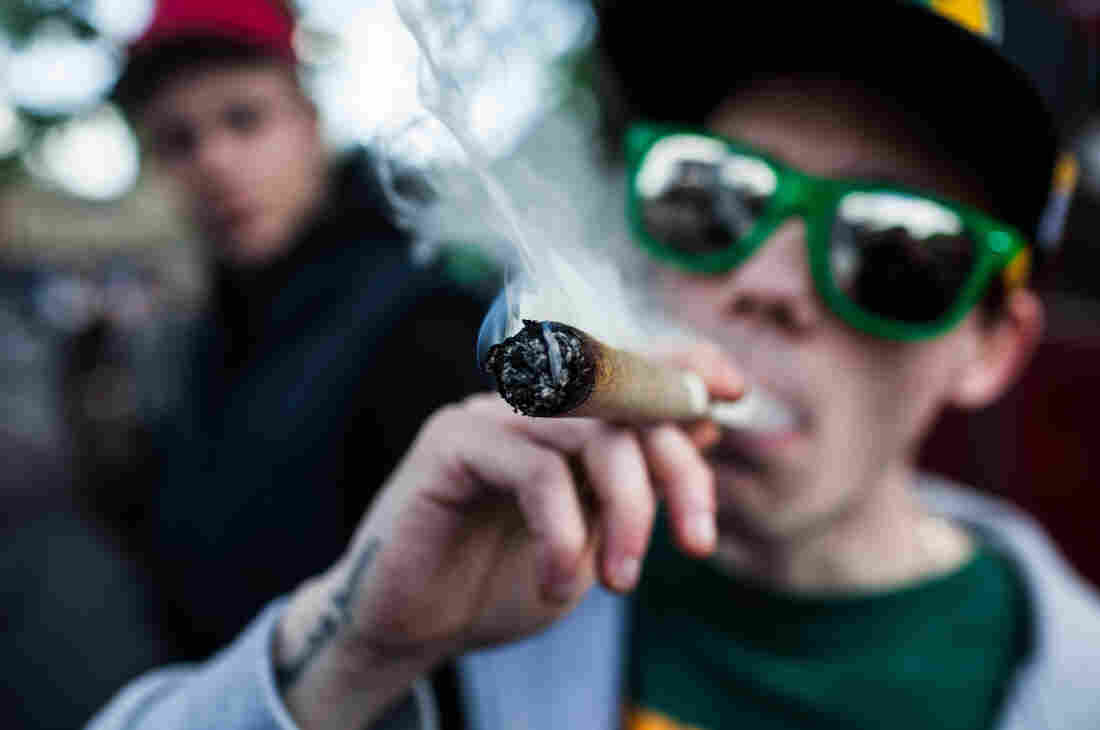 A smoker takes a puff at the annual Global Marijuana March in Copenhagen in May 2013. Gonzales Photo/Demotix/Corbis hide caption 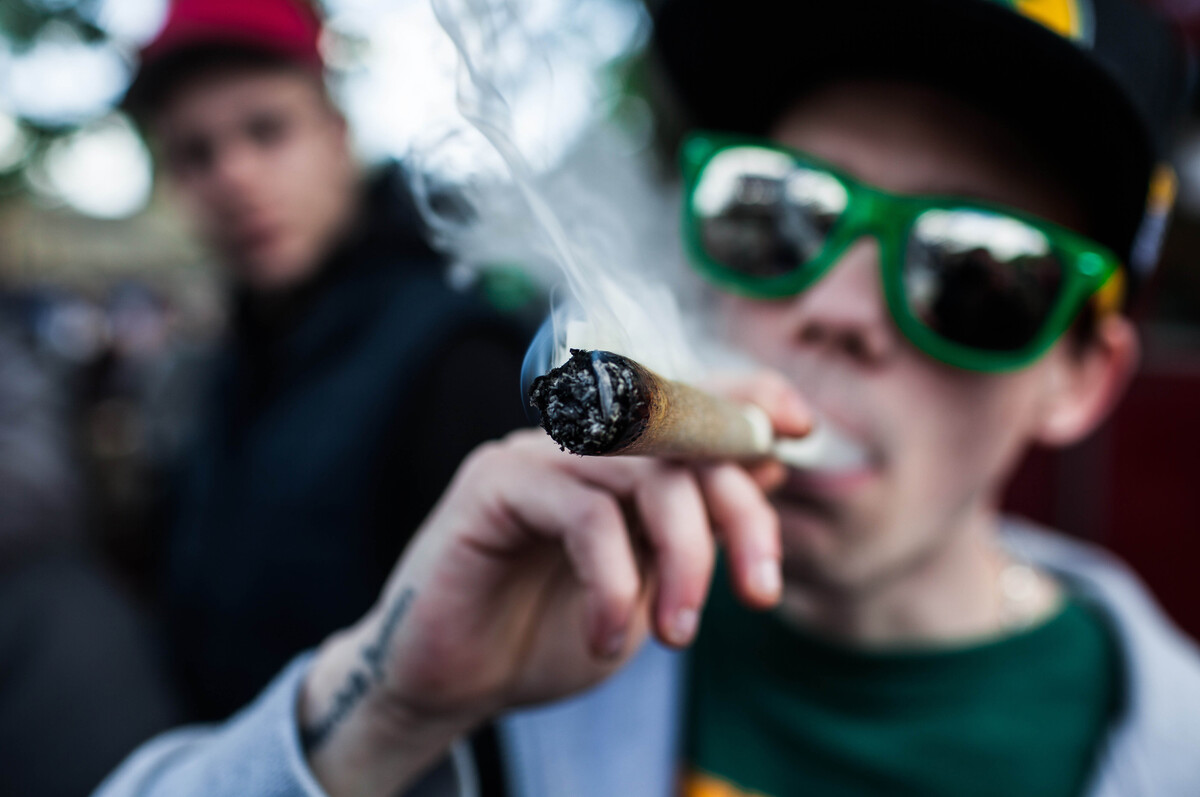 A smoker takes a puff at the annual Global Marijuana March in Copenhagen in May 2013.

Gabriela walks into a large, dimly lit apartment, goes to a counter, buys a bag of sativa and sits on the sofa with her friends, joint in hand, like in Amsterdam. Except this is not Amsterdam. This is Barcelona, and the open sale of marijuana is illegal.

Still, places like these are popping up all over the city and in many other European capitals like London, Paris and Ljubljana, Slovenia, part of a sneaky end run around Europe's widespread prohibition of pot. These "cannabis social clubs" are seemingly innocent nonprofit associations that only serve members, at least in principle. Call it a grass-roots movement, emphasis on the grass.

"It's so convenient," says Gabriela, a 25-year-old secretary. "You pay a small yearly fee and then just come, pick what you want and sit around watching TV, playing video games ... some fancy clubs even serve drinks and hot food."

People come because they want to know the quality of what they consume and they want to support a more transparent model than the black market.

We'll have one large pizza, hold the prohibition, please.

Club Cannabis is a sexy model in a legal gray area. The social clubs operate openly in countries where personal consumption of small amounts of weed is not prosecuted, and growing that small amount might not technically break the law, either. Pair quasi-legal personal consumption with the right of association, and you have a pretty sneaky way around marijuana prohibition. As long as the total amount grown and distributed matches the sum of individual legal limits — presto! — it's not illegal trafficking, say members.

The authorities sometimes disagree. In June, a Catalonian club was shut down for drug trafficking, and some in the movement are pushing for more regulation so as to distinguish good clubs from bad ones.

The spread of European clubs tracks the awkward steps toward legalization in the United States. In both places, the shift began with medical marijuana. In the United States, many states have sanctioned uses of the drug that are banned under federal law — an absurd situation, according to most observers.

European law begs logic, too. In many European countries, private consumption is decriminalized, but growing and selling weed remains illegal. In spite of their different processes, Europe is heading to the same place as the United States. Users are puff, puff, puffing their way toward easier access and legalization.

The social clubs are for some a sly way to smoke up with friends, but proponents have embraced them as a cause, saying they're a model for grass-roots regulation. "Cannabis social clubs are the best alternative to a strict government monopoly or the large-scale legalization, which tends to incentivize consumption and benefit only big companies," says Joep Oomen, founder of Belgium's first CSC, Trekt Uw Plant, and secretary of the European Coalition for Just and Effective Drug Policies. 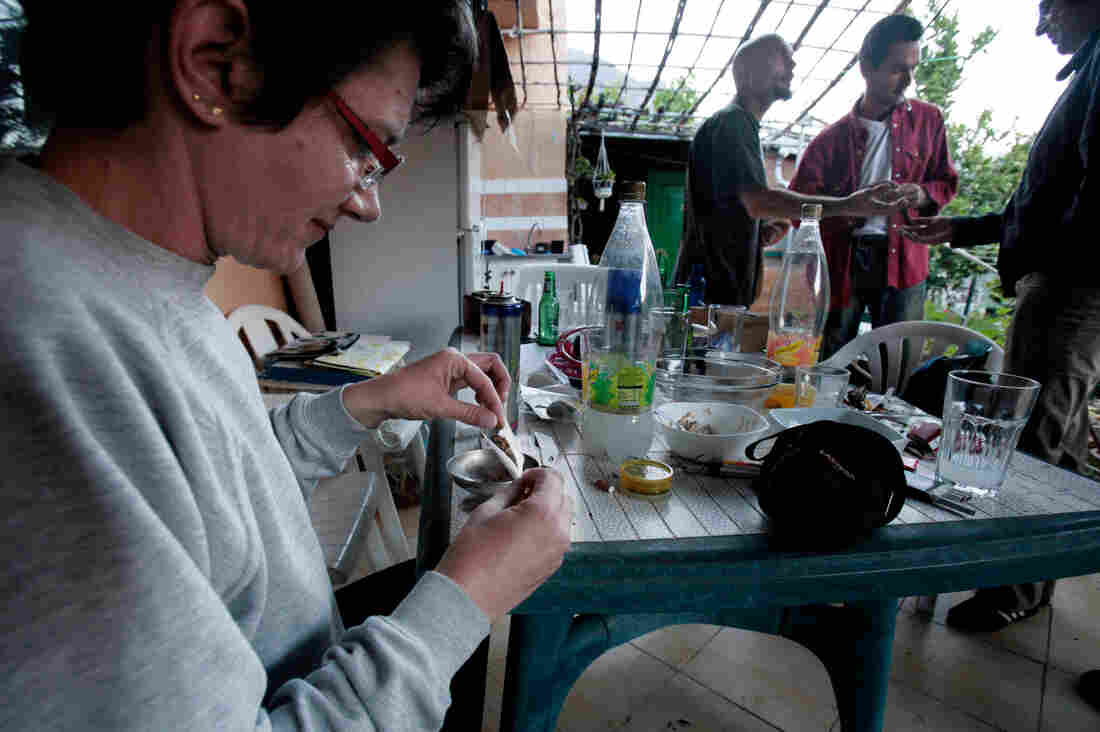 Eliane Detraz, a 42-year-old Swiss national member of the Sibaratas Med Can club, rolls a joint at the plantation of the association in Spain's Canary Islands in April 2013. AFP/Getty Images hide caption 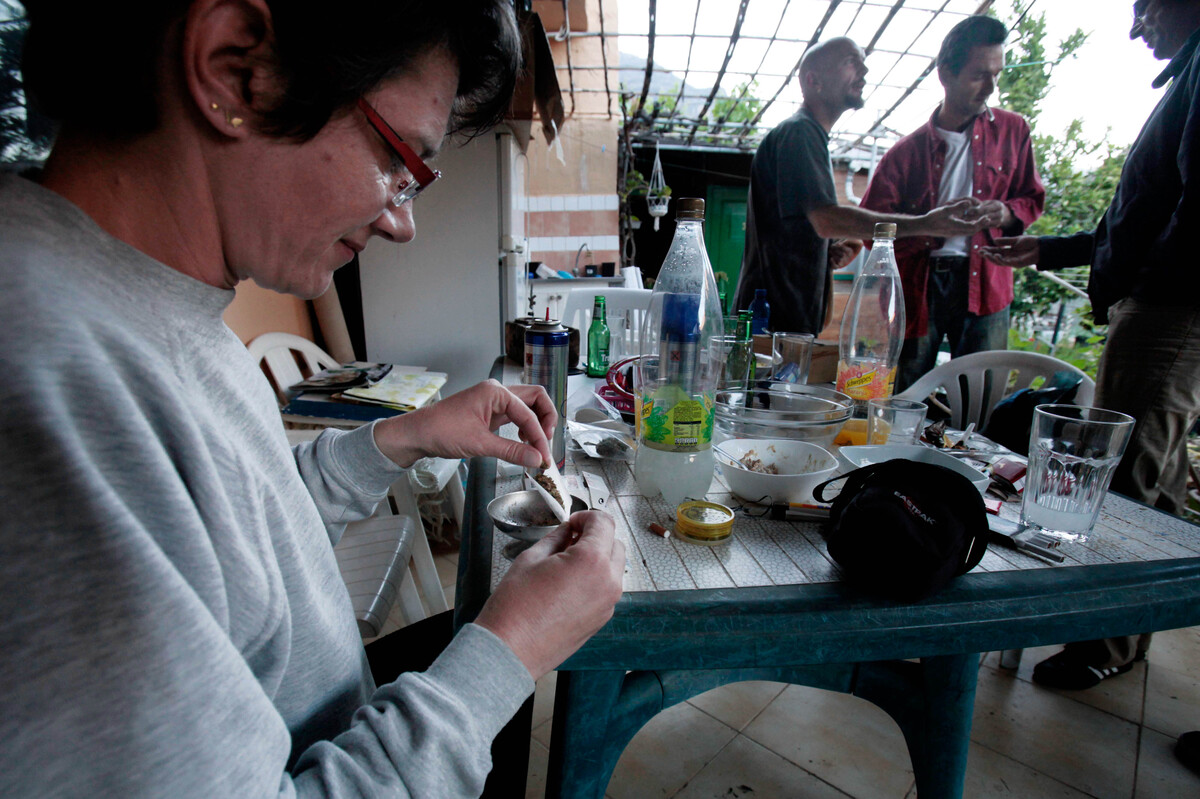 Eliane Detraz, a 42-year-old Swiss national member of the Sibaratas Med Can club, rolls a joint at the plantation of the association in Spain's Canary Islands in April 2013.

It's a crazy patchwork quilt of regulation across Europe. But somehow, marijuana usage seems to be spreading almost everywhere.

In Belgium, having less than 3 grams of weed or one female plant is OK. So the five cannabis clubs in the country can't offer more than that per person and can't have shared smoking spaces either. Members go to an office to pick it up and then head home to smoke.

Purchasing drugs for personal use isn't criminal in Slovenia, though users could face fines. Still, the country has six clubs and will have 10 soon, according to Jaka Bitenc, founder of the country's first cannabis association, SkSk.

The ultimate stoner paradise is Spain, where the law allows growing and consuming marijuana for private use without specifying a quantity. Pot clubs are thriving. The number of clubs in Spain has grown from 40 in 2010 to more than 700 today, with over 165,000 members.

"People come because they want to know the quality of what they consume and they want to support a more transparent model than the black market," says Martin Barriuso, from Club Pannagh.

Of course, some clubs skirt the rules. In violation of founding principles and codes of conduct, many associations allow members to register online. In downtown Barcelona, it's easy to spot people giving out fliers or bringing in tourists for a quick puff. Some call Barcelona the "Holland of the South."

In Catalonia alone, pot associations sell an estimated €5 million a month ($6.7 million), so it's no surprise that a club has already been shut down for drug trafficking and four people have been accused of money-laundering. 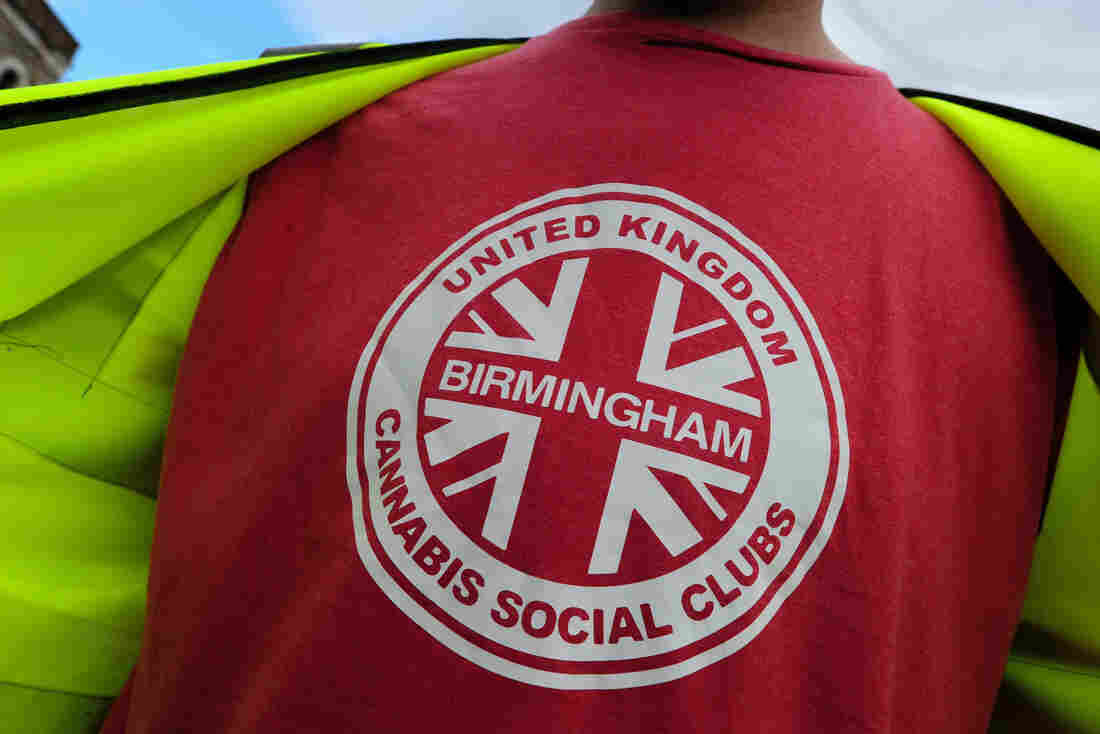 A man wears a U.K. cannabis social clubs T-shirt at an October 2013 rally in London supporting the legalization of marijuana. Gail-Orenstein/Demotix/Corbis hide caption 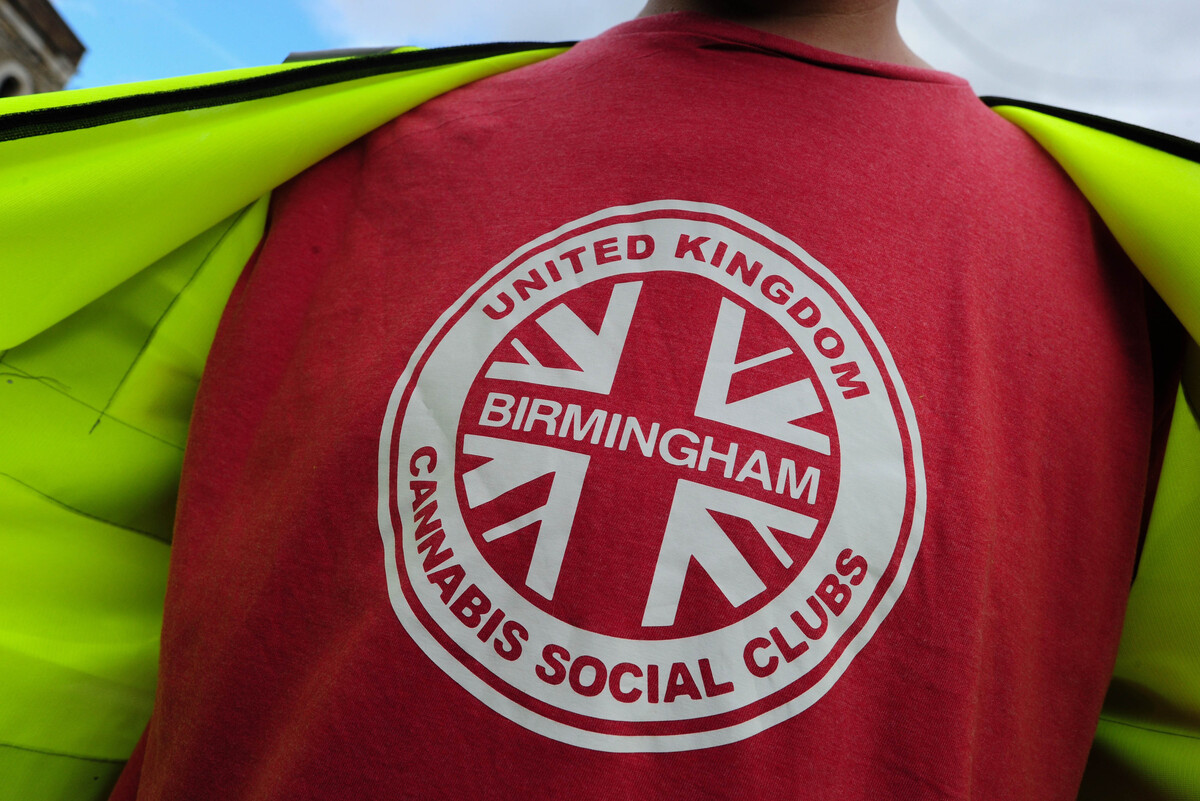 A man wears a U.K. cannabis social clubs T-shirt at an October 2013 rally in London supporting the legalization of marijuana.

Regional authorities have responded by drafting strict new measures to regulate the sector, such as forbidding the use of cash or advertisements. Spain's Ministry of Health is set to come up with new regulations by 2015.

Most associations welcome the news. "Regulation was a necessity because we have been operating with a lot of legal insecurity and things were getting out of hand," says Jaume Xaus, the spokesman for the Catalonia Federation of Cannabis Associations.

Others would rather ban the clubs outright. "Legislating is giving up," says Per Johansson, secretary of the board of the World Federation Against Drugs. He says arguments in favor of cannabis social clubs are "naive at best," because regulation will not put an end to the black market.

Still, Johansson seems like a voice in the wilderness as associations gain momentum even in countries where the laws are strict.

In France, any consumption or distribution is illegal, and yet there are some 400 underground clubs. The U.K. is also gearing up with 74 associations like the London Cannabis Club, which organizes meetings for weed aficionados to discuss growing methods and lobbying strategies and have the occasional smoke-out.

Austria's Hemp Institute just launched a parliamentary initiative to legalize cannabis, and major Swiss cities like Geneva, Basel and Bern are backing an initiative to regularize the use of marijuana through users' associations. There's even talk of a first cannabis cafe opening in Berlin.

Of course, the social club model could go up in smoke if governments legislate against it. More likely: This bottom-up approach could get European countries rivaling Colorado as a smoker's heaven.