Accessibility links
The Answers To Your Questions On Scotland's Independence Vote : Parallels NPR's Ari Shapiro and Marilyn Geewax explain what it would mean if Scotland decides on Thursday to cut its more than 300-year union with the United Kingdom. 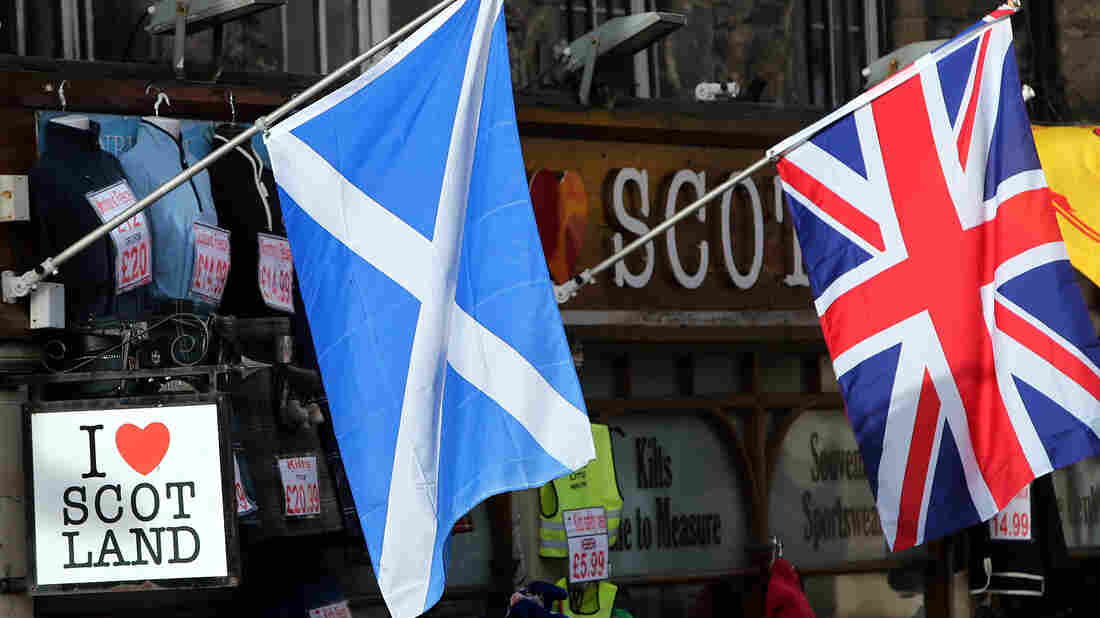 A Scottish flag and a Union flag fly outside a Scottish memorabilia shop in Edinburgh. Scotland votes Thursday on whether it wants independence from the United Kingdom. Scott Heppell/AP hide caption 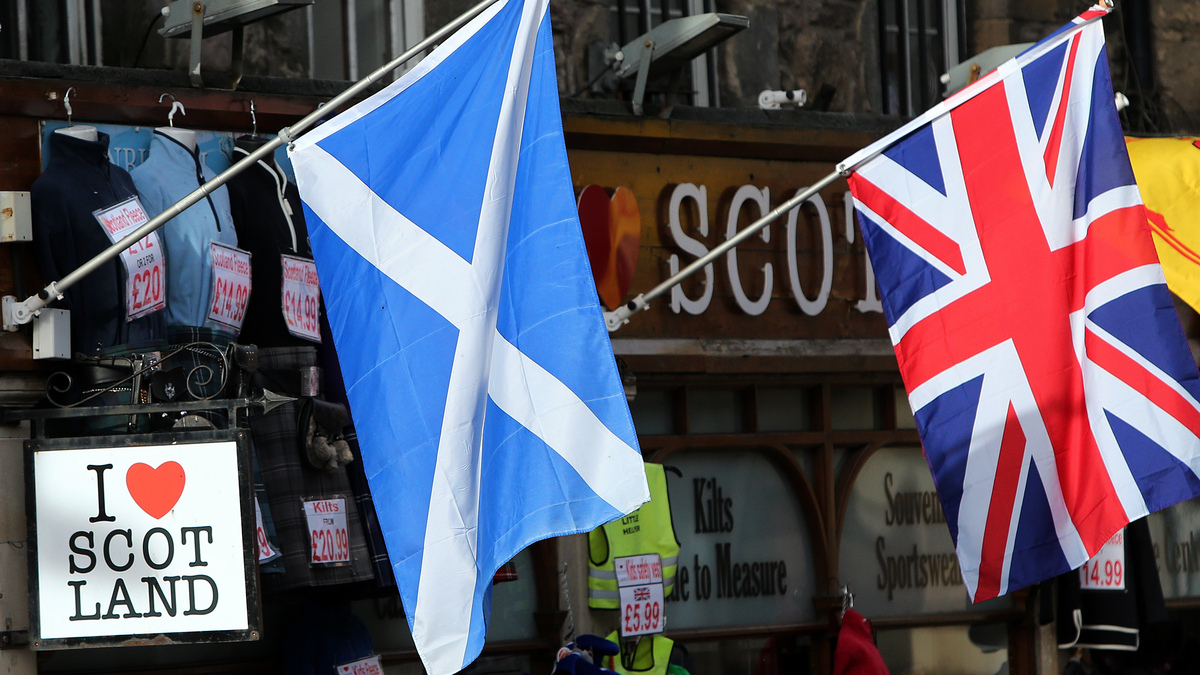 A Scottish flag and a Union flag fly outside a Scottish memorabilia shop in Edinburgh. Scotland votes Thursday on whether it wants independence from the United Kingdom.

Voters in Scotland will decide Thursday whether to break away from the United Kingdom and sever a relationship that has tied Scotland to its neighbors for more than three centuries.

If a majority votes "yes," then Scotland would become independent, probably in 2016. A "no" vote would keep Scotland as a part of the U.K., and polls suggest the outcome is too close to call.

Americans have lots of questions about what it might mean for our close ally and trading partner, the United Kingdom, which is currently made up of Scotland, England, Wales and Northern Ireland.

NPR correspondent Ari Shapiro is in Scotland covering the vote. And as a business editor based in Washington, I've been writing about the economic implications of a potential breakup.

Together, we answered questions from people who joined us on Facebook. Here are highlights:

Like It Or Not, Scotland's Drama May Hit Your Wallet

Why do you think the referendum went from a "certain no" to "too close to call" in recent weeks? What changed?

Ari: That is a great question, and a very difficult one to answer — even for the people who study this full time.

The best theory I've heard is that the "no" campaign's dire warnings backfired and tapped into Scotland's famous reputation for defiance, whereas the more people had time to acclimate themselves to the idea of independence, the less scary it seemed.

What currency would the Scots use if independent? Will they come up with their own currency? Join the eurozone?

Ari: The currency question has probably been the single largest issue in the debate, and it remains unanswered.

Scotland wants to enter into a currency union to continue using the pound. Westminster says no. Scottish First Minister Alex Salmond has been under intense pressure to specify what his "Plan B" would be if Scotland is left without the pound. In short, the whole thing is complicated and uncertain.

What would be the point of having independence but remaining with the same currency as the U.K.? Don't they know it is giving the U.K. power over their finance system?

Marilyn: This is really one of the strongest arguments against independence. Many economists say the mess involving the euro proves that it is not a good idea to share a currency unless you also share political power.

For those for or against independence, is there a noticeable split on generational or socio-economic lines?

Surprisingly, the 16- and 17-year-olds who were granted the vote for the first time in this referendum are not as pro-independence as many pundits expected; in fact, they seem to be more unity-inclined than their parents.

What are some of the potential global impacts of Scottish independence?

Marilyn: The biggest global concern is that a "yes" vote in Scotland would trigger other breakaway movements within the European Union, and ultimately that would create more financial-market uncertainty and less global trade.