Accessibility links
When The U.S. Backs Rebels, It Doesn't Often Go As Planned : Parallels As the U.S. begins to arm and train Syrian rebels, here's a look at the very mixed record of U.S. support for rebel movements from Angola to Afghanistan. 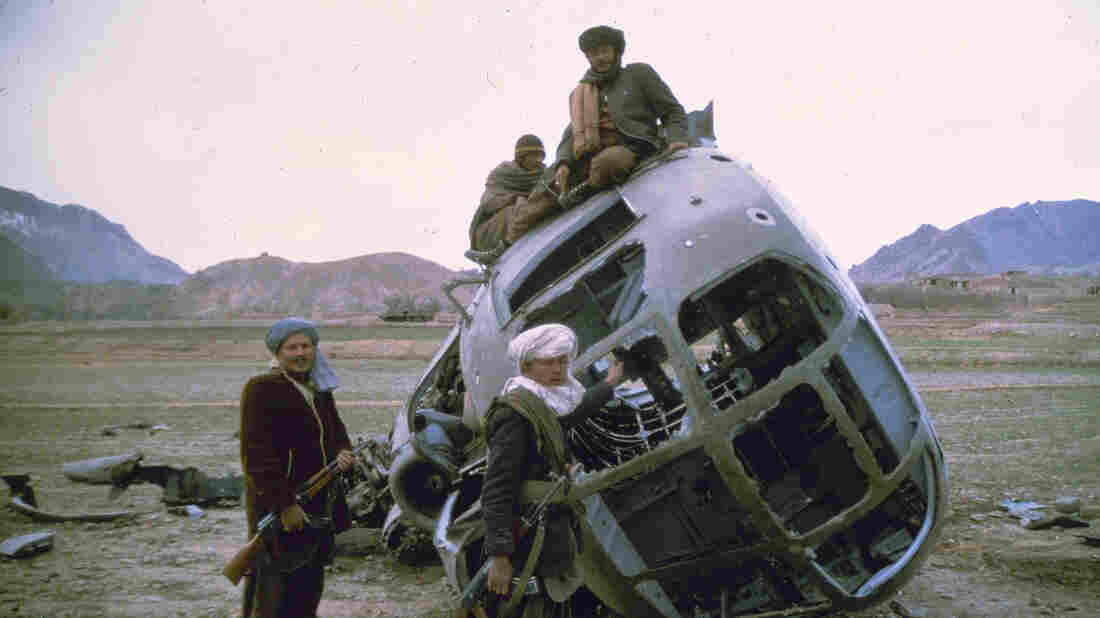 Afghan rebels, or mujahedeen, climb on a Soviet helicopter they shot down in 1981. U.S. assistance helped the rebels drive out the Soviet forces. But the chaotic conditions in Afghanistan allowed al-Qaida to take root in the 1990s. Freedom House/AP hide caption 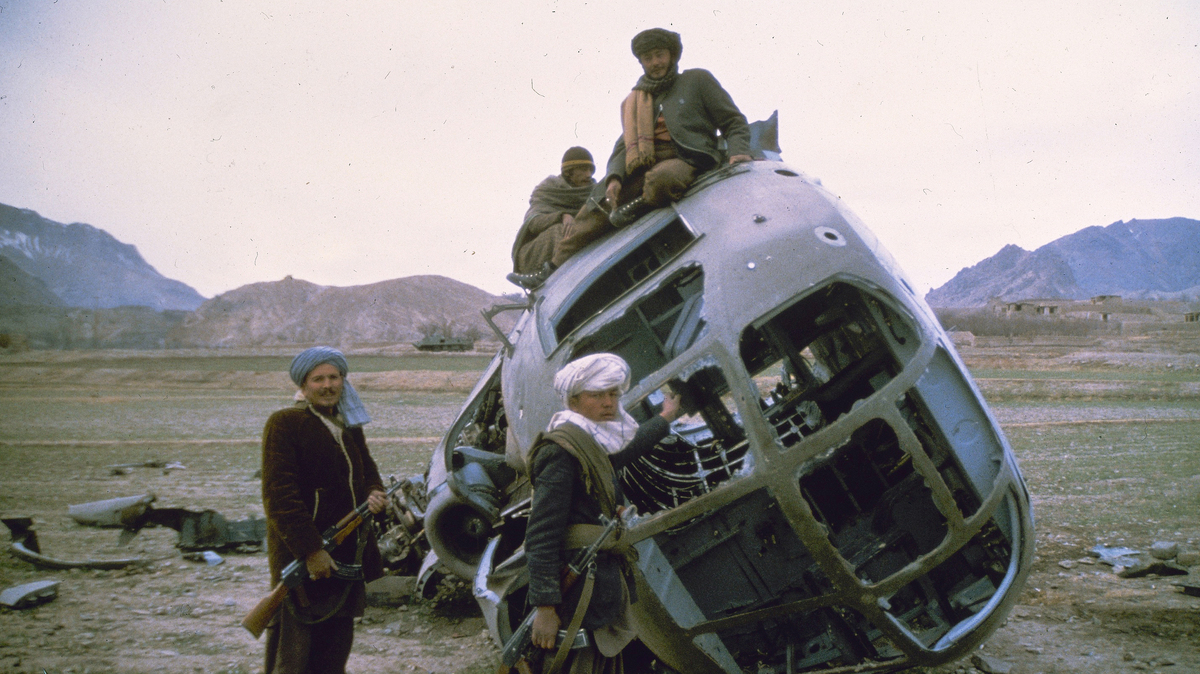 Afghan rebels, or mujahedeen, climb on a Soviet helicopter they shot down in 1981. U.S. assistance helped the rebels drive out the Soviet forces. But the chaotic conditions in Afghanistan allowed al-Qaida to take root in the 1990s.

As the U.S. steps up arms and training, Syria's "moderate" rebels are joining a long line of resistance movements the Americans have backed over the decades, from Angola to Afghanistan.

The high-water mark was President Reagan's administration in the 1980s, when the U.S. supplied weapons to three rebel groups on three separate continents in Cold War proxy fights designed to undermine the Soviet Union.

So how have they worked out?

U.S. support has consistently given rebels a boost in the short term, sometimes leading to outright victory. But battlefield success is never the end of the story. Unanticipated consequences often play out years later, casting the mission in a very different light.

President Obama is well aware of this. He gave a major foreign policy speech in May, warning about the potential hazards of foreign entanglements and indicating that he intended to emphasize diplomacy more and rely less on U.S. military might.

"I think Americans have learned that it's harder to end wars than it is to begin them," the president said.

Yet just four months later, the president has called on the military to confront the Islamic State and a key component of his plan will be to work closely with Syria's rebels.

Here's a look at several prominent cases in recent decades:

Afghanistan: This major CIA operation spanned the 1980s, as the Afghan rebels, or mujahadeen, steadily chipped away at the occupying Soviet army. When the Soviets withdrew in 1989, it was considered a huge success and also seen as a factor in accelerating the Soviet Union's decline.

But then the U.S. and everyone else abandoned Afghanistan. The ensuing chaos among the well-armed rebel factions proved fertile ground for the eventual rise of the Taliban, which in turn played host to al-Qaida.

Now, more than 30 years after the CIA's initial intervention, the U.S. is withdrawing combat troops from a country that remains fragile and plagued with violence.

One of the many takeaways is that the goals of the U.S. and the rebel groups can diverge sharply. Another is that the rebels aren't going to give those weapons back. 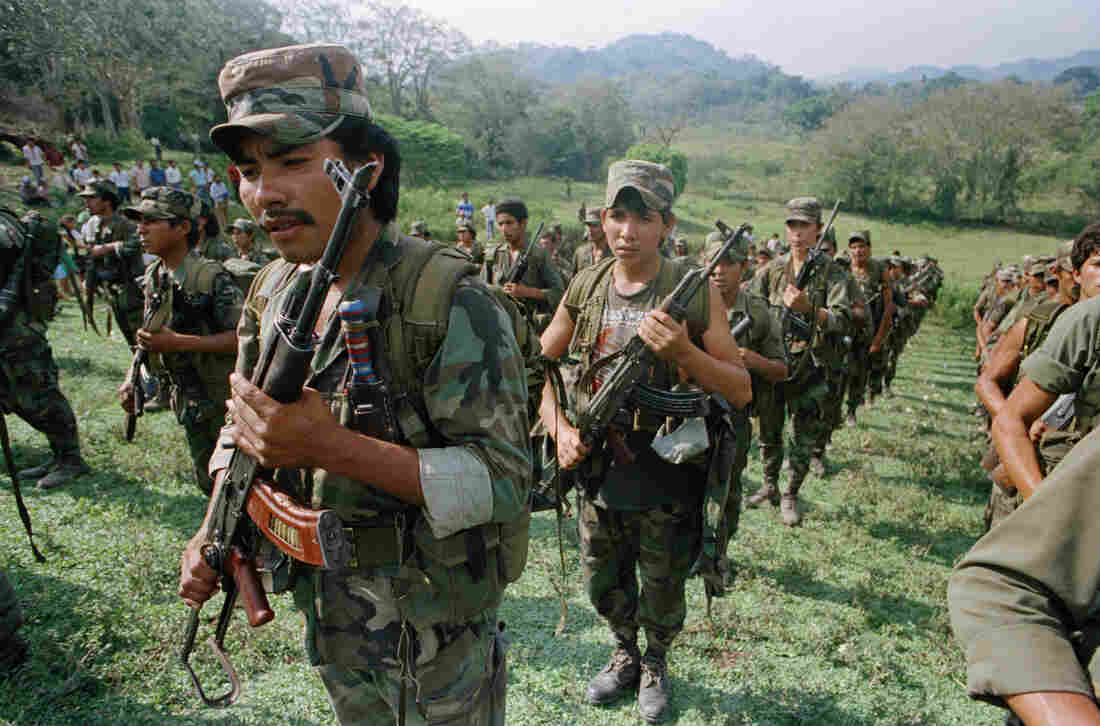 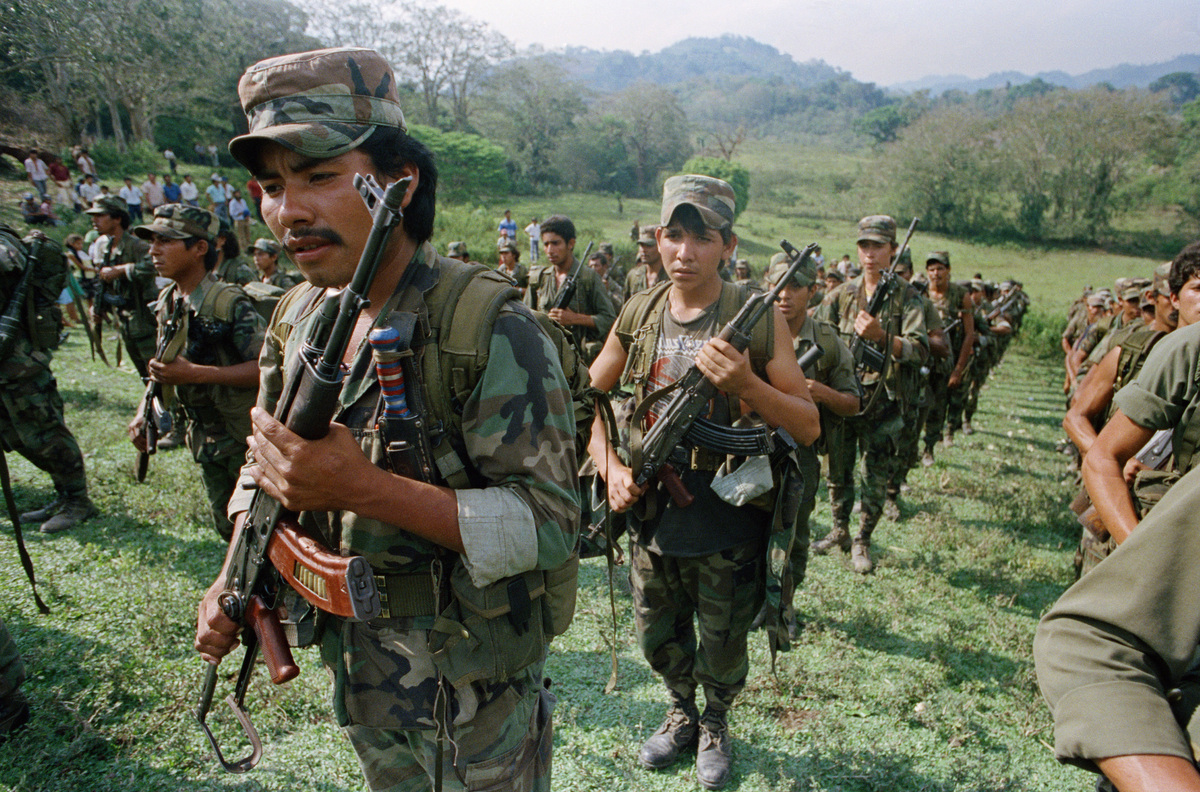 Nicaragua's Contra rebels in 1990. The U.S. backed the Contras in the 1980s, which led to the ouster of the leftist Sandinista leadership. But the U.S. aid violated American law and contributed to the biggest scandal of President Reagan's administration.

Nicaragua: The Reagan administration armed the Contra rebels in their fight against the leftist Sandinista government throughout the 1980s. The war as nasty, with some 30,000 killed, but neither side scored an outright battlefield victory.

However, in 1990 elections, President Daniel Ortega and the Sandinistas were voted out in favor pro-American candidate Violetta Chamorro.

While events in Nicaragua played out to the liking of the Reagan administration, there was big trouble in Washington. The administration had secretly sold weapons to Iran and funneled the proceeds to the Contras in defiance of a congressional law. The resulting Iran-Contra controversy was the biggest scandal of the Reagan years and several members of his administration were convicted of crimes.

Ortega, meanwhile, was re-elected in 2007 and remains in office. Relations with Washington are cool, though no longer hostile. 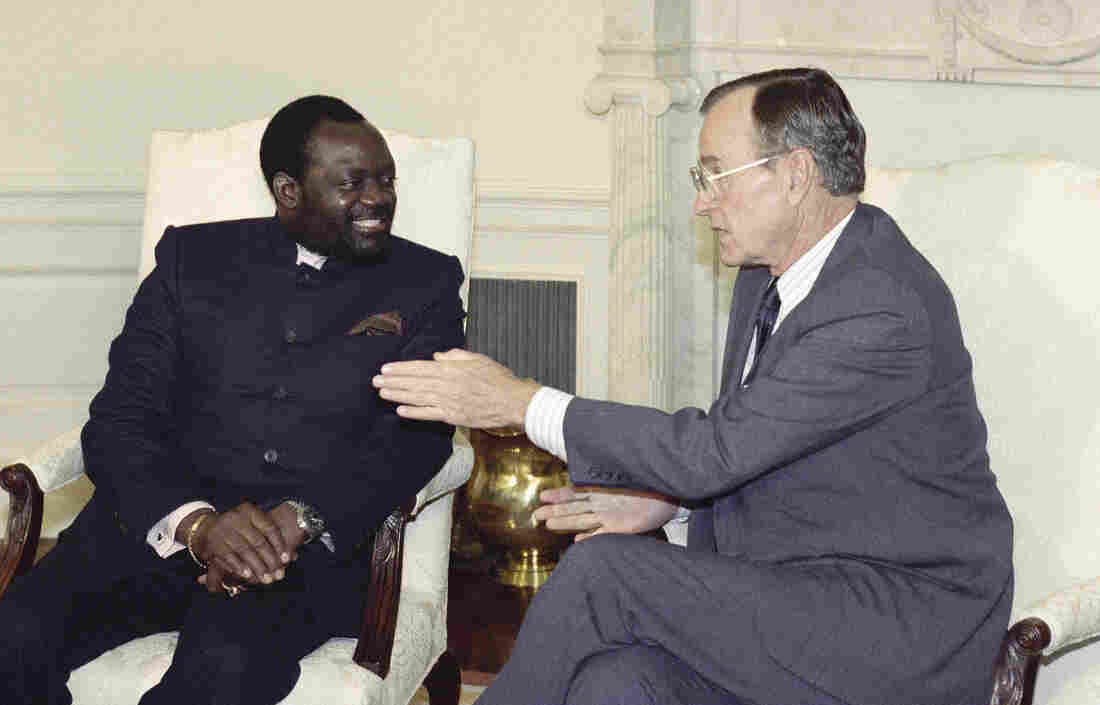 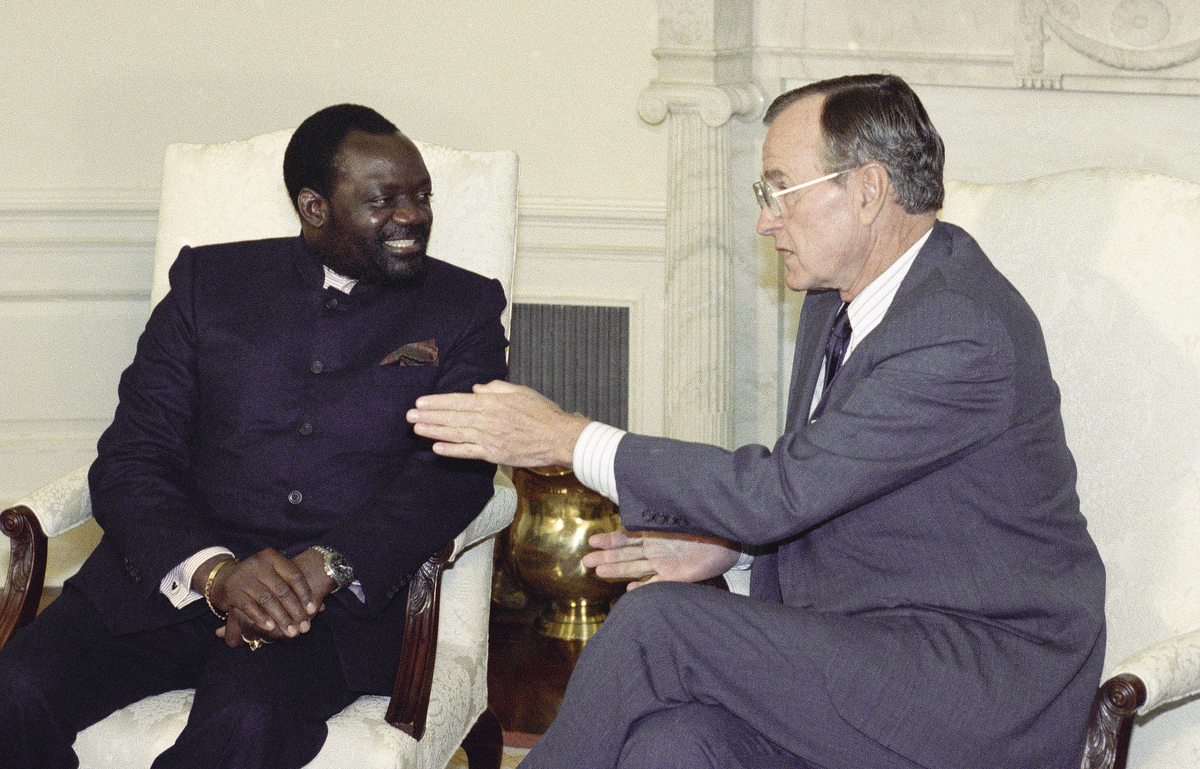 President George Bush meets Angolan rebel leader Jonas Savimbi at the White House in 1989. The CIA began backing Savimbi's movement in the 1980s against Angola's Marxist government. Savimbi was killed in fighting in 2002 and Angola's long-time president remains in power.

Angola: The CIA began supporting Jonas Savimbi and his UNITA rebels in the mid-1980s against the Marxist Angolan government. Reagan and President George H.W. Bush both invited him to the White House during the long, devastating war.

A peace deal was reached in 1994, but Savimbi never embraced it and relaunched his rebellion in 1998. He was killed in battle in 2002. With the Cold War long over, the main U.S. interest had shifted to Angola's huge oil reserves.

Angola's President Jose Eduardo dos Santos, who has ruled since 1979, is now known more for his country's oil exports than its long-abandoned Marxism. When it comes to U.S. oil imports, Angola consistently ranks among the top 10 suppliers. 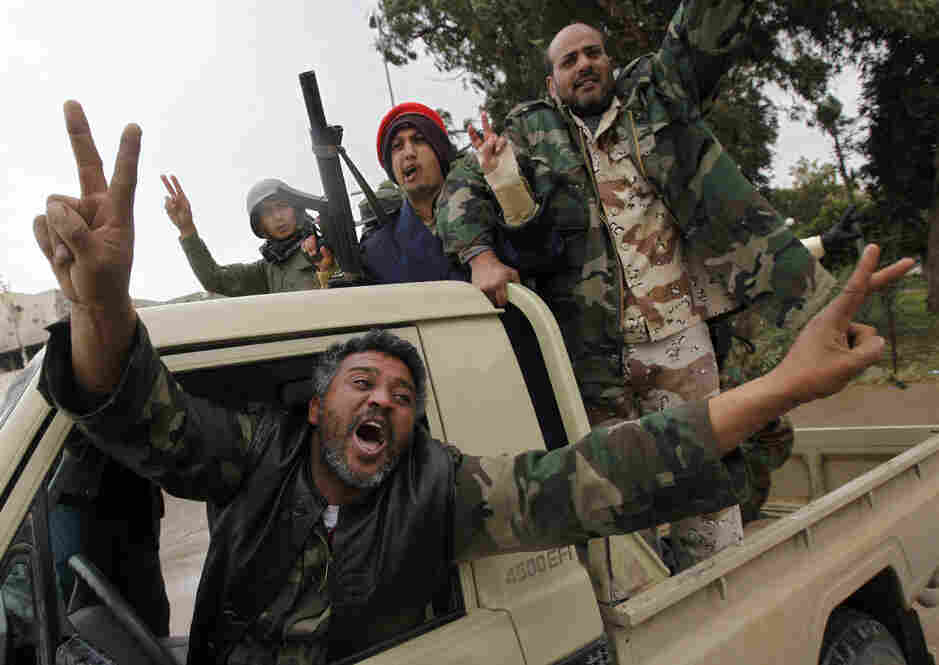 Libyan rebels celebrate in the eastern city of Benghazi on Feb. 27, 2011. U.S. airstrikes later that year helped the rebels overthrow Gadhafi, but the country has since descended into chaos. Hussein Malla/AP hide caption 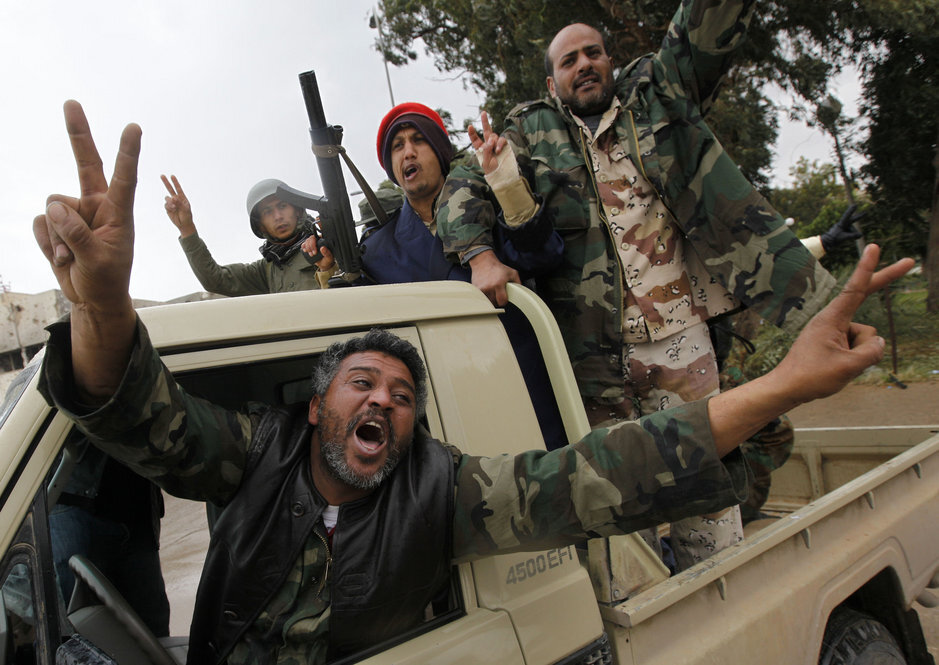 Libyan rebels celebrate in the eastern city of Benghazi on Feb. 27, 2011. U.S. airstrikes later that year helped the rebels overthrow Gadhafi, but the country has since descended into chaos.

Libya: The U.S. and NATO air campaign on behalf of Libya's rebels in 2011 turned the tide in that country's civil war. The rebels were in retreat and in danger of being wiped out by dictator Moammar Gadhafi.

The air campaign put the rebels on the offensive and within months they seized the capital Tripoli. Gadhafi was captured and killed a short while later.

The operation seemed like a model of success at the time. The Libyan dictator was ousted. The military and financial costs for the U.S. were modest. And Libya, with its deep oil reserves, appeared to have a shot at a decent future.

But Libya rapidly descended into utter chaos as multiple militias continue to battle for power.

Obama says he regrets that his administration didn't better prepare for what would come after the revolution.

"Then it's the day after Gadhafi is gone, when everybody is feeling good and everybody is holding up posters saying, 'Thank you, America.' At that moment, there has to be a much more aggressive effort to rebuild societies that didn't have any civic traditions," Obama told The New York Times. "So that's a lesson that I now apply every time I ask the question, 'Should we intervene, militarily? Do we have an answer [for] the day after?'"

All this brings us back to Syria.

Obama long resisted major American involvement but says the rise of the Islamic State increased the threat to the U.S. The Americans will be backing rebels who have been faring poorly on the battlefield and are fighting on two fronts — against both the Islamic State and Syrian President Bashar Assad's army.

Yet beating back the Islamic State could benefit Assad's army. With countless rebel factions involved in the fighting, predicting the war's trajectory is anyone's guess.

And Syria is just part of the equation. The U.S. is also bombing in Iraq, where it's working with Iraqi government forces and Kurdish Pesh Merga fighters.

While most Americans now support Obama's plan, critics say the president has failed to meet his own standard of planning for "the day after."

Commentator David Frum, a speechwriter for President George W. Bush, acknowledges the shortcomings in launching the Iraq war in 2003.

"Those of us associated with the Bush administration bear the burden of having launched a war on false premises that then yielded disappointing results," Frum writes in The Atlantic. "But it's one thing to fail to achieve your aims. It's another to start a war with no discernible aims at all."

"Obama is now preparing another intervention — this one vastly more important — in Syria and Iraq with no clearer idea of what he hopes to achieve than he had in Libya," argues Frum.

Greg Myre is the international editor for NPR.org. Follow him @gregmyre1.