Accessibility links
In The Gaza Strip, The School Year Gets Off To A Rocky Start : Parallels Palestinian kids in Gaza went back to school this past week in buildings damaged by the war, with children homeless and traumatized, and more than the usual overcrowding they face every year. 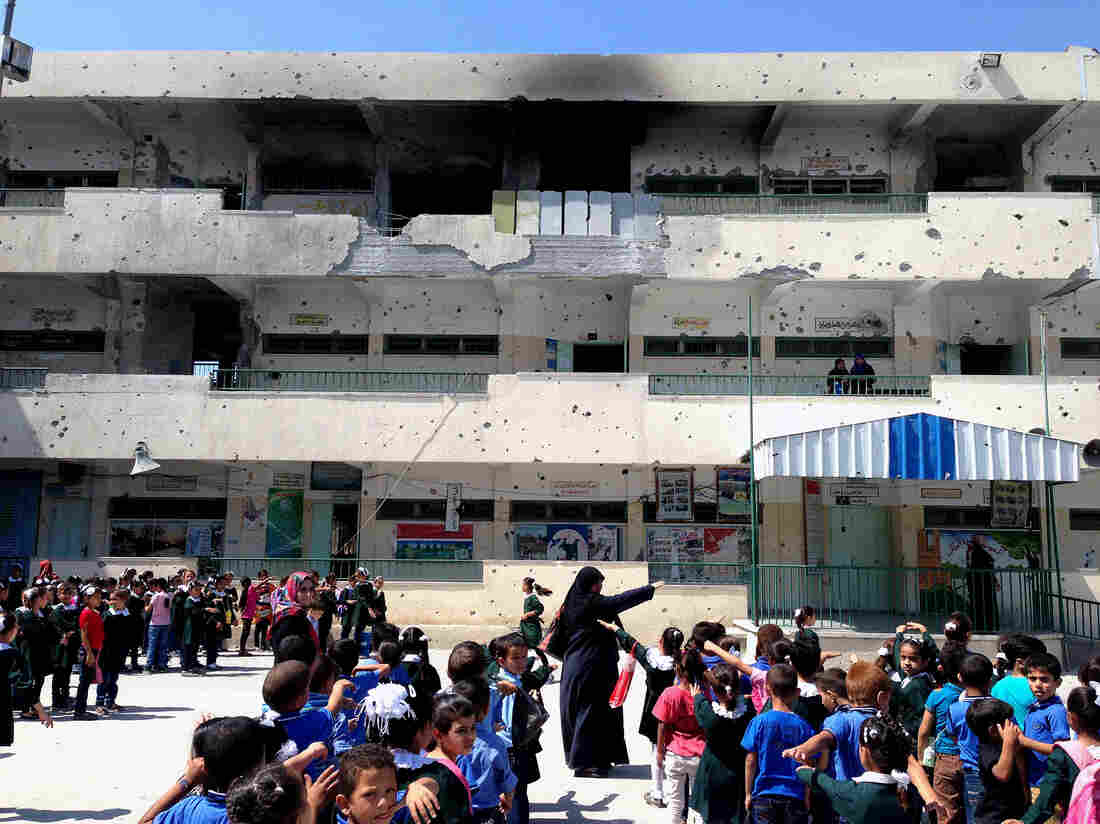 Classrooms across Gaza are crowded with as many as 50 or 60 students, principals say, as dozens of school buildings have been destroyed or damaged, or are still housing people who lost their homes. Emily Harris/NPR hide caption 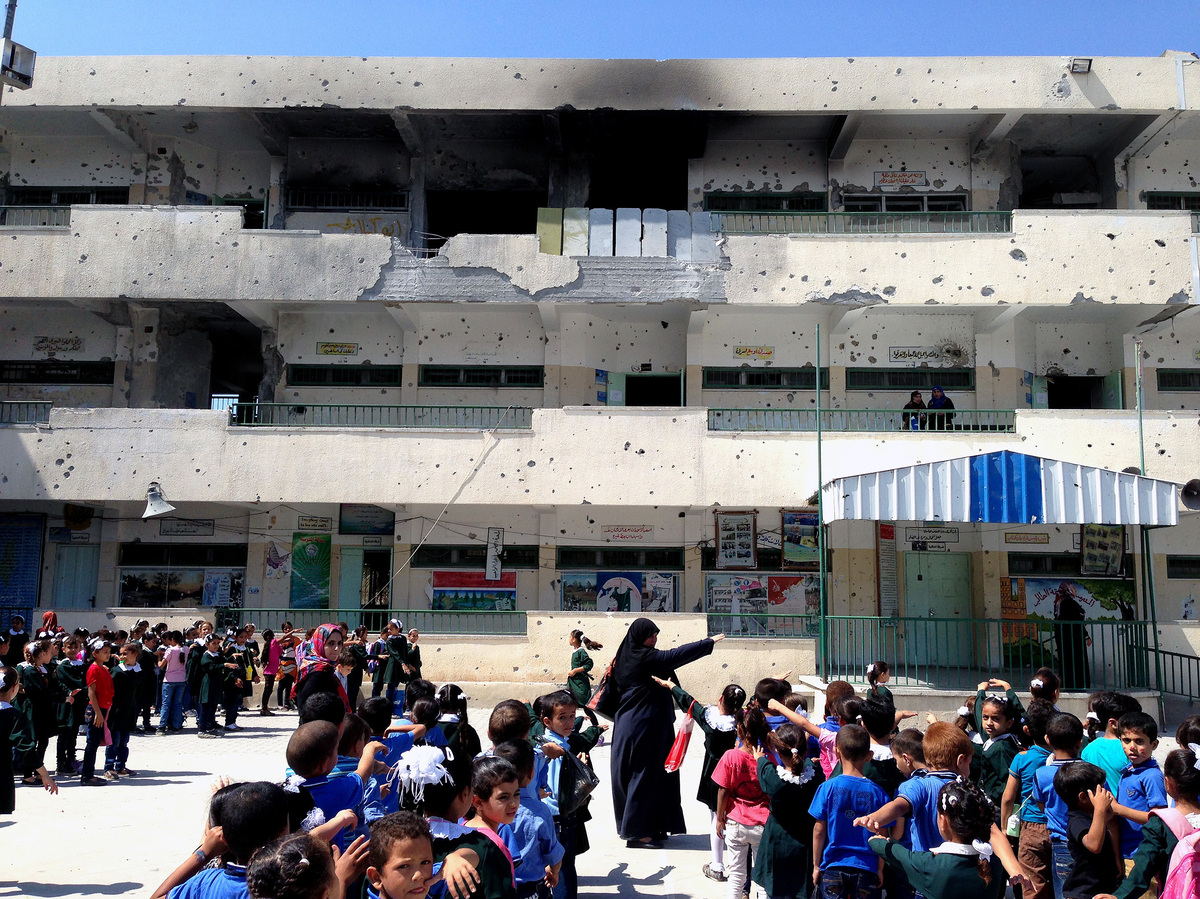 Classrooms across Gaza are crowded with as many as 50 or 60 students, principals say, as dozens of school buildings have been destroyed or damaged, or are still housing people who lost their homes.

Last week in Gaza, half a million children went back to school after a summer of war. The academic year started late; among other things, authorities had to check buildings for unexploded ordnance and scrub schools that had been used to shelter hundreds of thousands of displaced families.

Among the students returning to class was 16-year-old Wala'a Abdelkas, a sophomore from Gaza's al-Bureij refugee camp.

A big, pink plastic watch peeked out from under the sleeve of her long, dark school uniform as she walked arm-in-arm with a friend through the courtyard. The building was unfamiliar; her neighborhood school was destroyed in the war. With dozens of schools still sheltering people, destroyed or simply too damaged to use, classrooms are more overcrowded than usual.

Also new for Wala'a: going to school without her younger sister Isma.

"We were like twins," Wala'a said. "We spent all our time together, quarreling usually. And talking."

Isma was killed in July, when a neighbor's house was struck with explosives. "Now I don't really have anyone to talk to," Wala'a says. "I miss her."

Children in Gaza have experienced three wars between Israel and Hamas over the past six years. This summer's seven-week conflict was the longest and most destructive, with the highest number of people killed, injured and displaced from their homes.

So school authorities decided to start this school year differently. For at least the first week — longer in some schools — academics were put on hold. Visiting therapists or the school's own teachers led children in art, drama and other creative activities.

On the playground of Al-Zaitoun Primary School in Gaza City, hundreds of little girls clapped their hands and yelled as loud as they could, following the lead of adults trained in play therapy.

The louder the better, said one play therapist.

Some girls held balloons as they lined up, marched in circles and sang. Therapist Mohmmad Kahloot said it helps him to see kids smiling again.

"When they overcome such a catastrophe and smile, this gives us relief," he said. "This gives us hope for tomorrow."

His colleagues say after this summer, even the therapists in Gaza need therapy. So do parents. As children shouted in the al-Zaitoun school courtyard, more than 40 women crowded in a second-floor classroom to hear a psychologist talk. She asked the women to share their experiences during this most recent war.

One mother first praised God and Palestinian solidarity. Then she described her internal struggle to silence her fears that her son might be killed whenever he left the house during the war.

She said even after the fighting stopped, her younger daughter was afraid to walk past a mosque that was destroyed, worried that more bombs would fall.

Another mother said her fourth-grade daughter started sucking her thumb and wetting the bed, and won't go to sleep without someone holding her.

As The Gaza Strip Calms Down, The West Bank Heats Up

The psychologist acknowledged that the stress of conflict can show up in different ways, and encouraged them to try to put the war behind them.

That may be most difficult for families who have no home to return to. More than 50,000 people are still living in 19 United Nations-run schools. Last week, some moved from a U.N. school in Beit Hanoun to a nearby government school building too damaged to use for classes.

Yusef al-Masri, with his two wives and nine children, moved into two classrooms in that school, divided now by a pile of rubble where a separating wall used to be. The outside wall of one room is gone; a tarp covers the hole, and all the windows are broken.

Al-Masri and extended family members say they were moved here because the U.N. needed to use the school where they had been living for students. The U.N. has been working to consolidate families still needing shelter, and is offering rent subsidies as well as one-time $500 payments to help families get back on their feet.

But, sitting in the dark in the damaged school building last Wednesday night, Maha al-Masri said her family has not yet gotten that kind of help. She was deeply frustrated.

"We understand that children have the right to start the school year," she said. "But we have a right to shelter too."

Facing an uncertain living situation, and, these parents said, no cash for transportation or supplies, the children in this family did not attend the first week of school.