Accessibility links
For U.S. Soldier Turned Aid Worker, The Goal Was To Help Syrians : Parallels Abdul-Rahman Kassig went to Iraq as a U.S. soldier and returned to the Middle East to establish an aid group. Here's a look at what motivated him to undertake a risky mission that cost him his life.

For U.S. Soldier Turned Aid Worker, The Goal Was To Help Syrians

For U.S. Soldier Turned Aid Worker, The Goal Was To Help Syrians 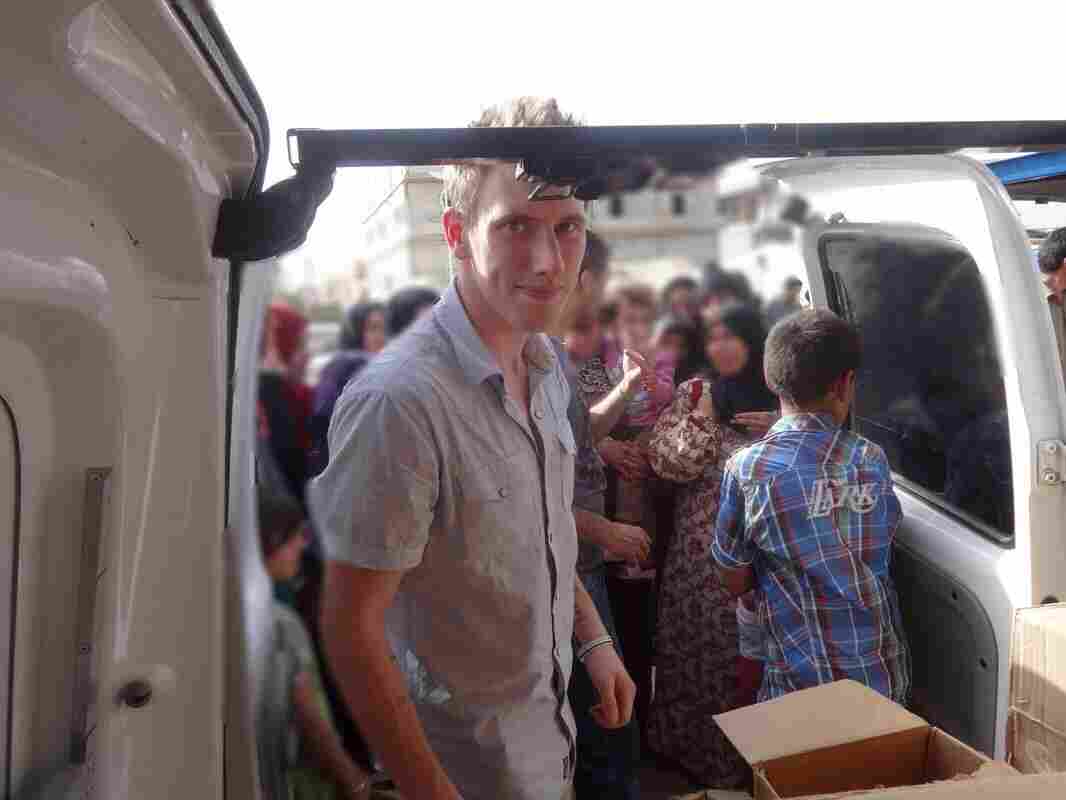 Abdul-Rahman Kassig, who was formerly known as Peter, is shown with a truck filled with aid supplies for Syrian refugees. The American aid worker was seized by the Islamic State in October 2013 and was killed by the group, which released a video Sunday of his beheading. Courtesy of Kassig Family hide caption 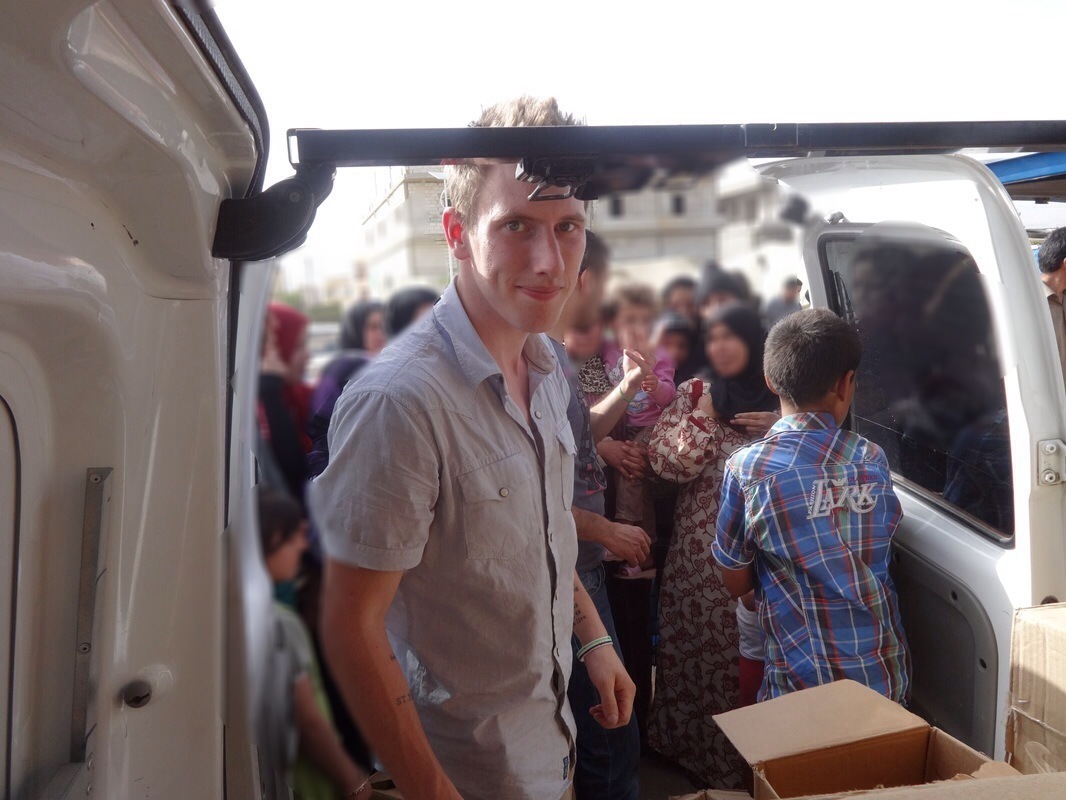 Abdul-Rahman Kassig, who was formerly known as Peter, is shown with a truck filled with aid supplies for Syrian refugees. The American aid worker was seized by the Islamic State in October 2013 and was killed by the group, which released a video Sunday of his beheading.

Editor's Note: This story on Abdul-Rahman Kassig, formerly known as Peter, was published last month after the Islamic State publicly threatened to kill him. It is being republished in the wake of his death.

I met Abdul-Rahman Kassig in Beirut in the summer of 2012, when the young American was still known as Peter. Yet the Arabic name he would soon choose for himself certainly seemed fitting — Abdul-Rahman alludes to the mercy of God, and Peter wanted so much to ease the suffering he saw in Syria.

Kassig first volunteered in the poor Palestinian camps of Lebanon, which are now also hosting thousands of Syrian refugees who have fled their homeland since war erupted there in 2011. He was deeply moved by what he saw, and he decided to delve further.

A trained emergency medical technician, he began volunteering at a hospital in Lebanon's neglected northern city of Tripoli, and he shared every part of life with his Syrian colleagues, living with them and sharing meals. He called it a "very emotional, life-changing experience."

Kassig took his work home with him. His house was always open to Syrian friends he met along the way. Kassig took them in like brothers, whether employing them in his aid group or just giving them a bed to sleep on.

Kassig had experienced war as a U.S. Army Ranger in Iraq in 2007 and openly shared that part of his background, even though it could potentially make many suspicious of him. He said he had decided to return to the Middle East to serve in a very different role.

"I can either be in a position to deliver tens of thousands of dollars of antibiotics for women and children, or I can be another young man with a gun," he told me in 2012.

At age 24, Kassig founded Special Emergency Response and Assistance, or SERA, dedicated to providing rapid medical training and supplies in volatile areas. He made several trips into Syria, delivering humanitarian supplies and passing along his skills to local medics.

In the 2012 profile on CNN below, Kassig says, "There's this impression, this belief, that there is no hope. That's when it's more important than ever that we come in, against all odds, and try to do something."

Kassig's humility and respect for Arab culture had won him the admiration of his colleagues at field hospitals. In a video message, one of them attested to Kassig's character:

"He cured everyone without exception; he trained many people on how to conduct an effective rescue operation. He shared our grief and our happiness," the colleague said. His face is blurred in the video to protect his identity, but he said Kassig even fasted with the Muslim workers during the holy month of Ramadan as a precursor for Kassig's own conversion to Islam.

SERA's Syria operations were intended to be the first step for the nonprofit with even bigger ambitions. But the work kept getting more dangerous as the Syrian conflict kept expanding, with many areas in critical need. 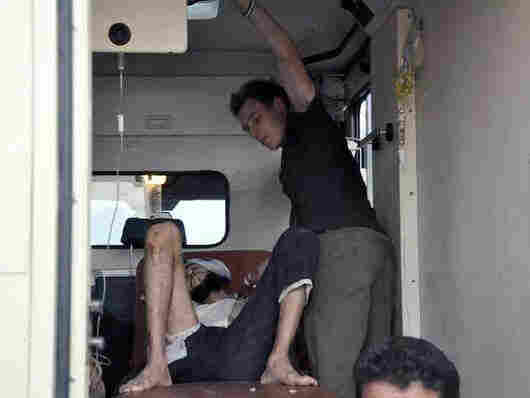 Kassig works as a medic to help a wounded man near the Syrian town of Deir Ezzor. A trained emergency medical technician, Kassig provided aid through the group he founded, Special Emergency Response and Assistance. Courtesy of Kassig Family/AP hide caption 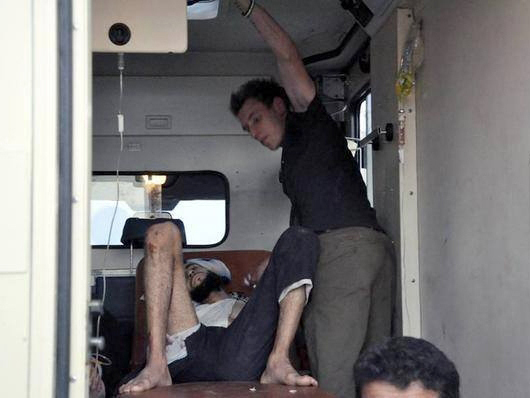 Kassig works as a medic to help a wounded man near the Syrian town of Deir Ezzor. A trained emergency medical technician, Kassig provided aid through the group he founded, Special Emergency Response and Assistance.

Many United Nations agencies, citing a lack of Syrian government permission, did not dare go to the areas where Kassig visited. In July, the world body changed its policy and authorized cross-border deliveries to rebel-held areas without regime permission.

"We're doing good work for refugees in neighboring countries, but too few organizations are able and willing to go deep into Syria," Egeland said last week.

Kassig was willing to go deep into Syria. But on a mission in October 2013, he was seized by the Islamic State.

In the aftermath, his parents in Indiana had requested a media blackout. But that changed when a video released in October of this year showed the beheading of British aid worker Alan Henning. Kassig appeared in the same video, and the Islamic State threatened to kill him next.

His parents started speaking out, pleading for his life. In an interview with NBC's Today show, Kassig's mother, Paula, said:

"I am hoping that he will somehow hear of this and of other conversations we've had or other times we've spoken in public. That way he'll know that we haven't forgotten him, we haven't abandoned him, and we certainly do love him."

Kassig's parents also released a letter last month that he had written and which was carried out by a hostage who was previously released. It read in part:

"Physically I am pretty underweight but I'm not starved, & I have no physical injuries, I'm a tough kid and still young so that helps. Mentally I am pretty sure this is the hardest thing a man can go through, the stress and fear are incredible but I am coping as best I can. I am not alone."

If Kassig knew the attention his predicament had generated, he likely would have preferred to shed light on the plight of the Syrians who have undertaken the same risks.

Thirty-seven Syrian Red Crescent workers and seven Palestinian Red Crescent staff and volunteers have lost their lives in the conflict. The risks are equal, if not greater, for Syrian activists delivering aid outside government channels because they are viewed as providing material support to the revolt against President Bashar Assad. 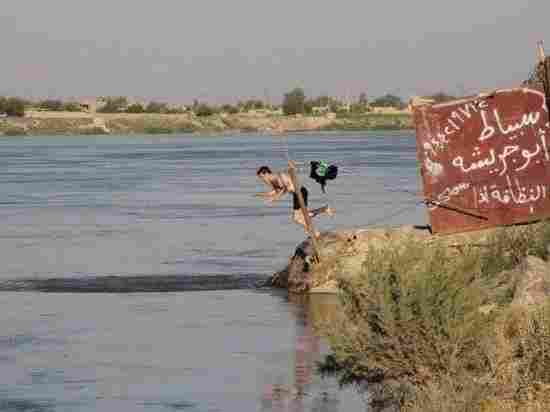 Kassig dives into the Euphrates River during a humanitarian mission to the eastern Syrian city of Deir Ezzor. Karam Jamal hide caption 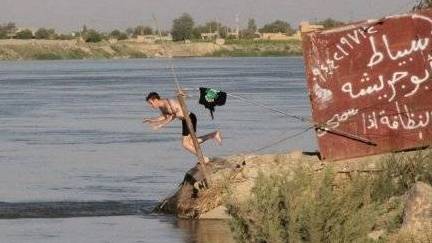 Kassig dives into the Euphrates River during a humanitarian mission to the eastern Syrian city of Deir Ezzor.

One Syrian woman, who was imprisoned with her teenage son by the Syrian government for delivering aid to the families of imprisoned dissidents in Lattakia, spoke via Skype of her three months spent in solitary confinement, where she was tortured.

"As humanitarian workers, we are treated worse than fighters," said the woman, who asked that her name not be used for her safety. She was one of the lucky ones because her wealthy brother-in-law was able to pay more than $30,000 in bribes to free her and her son. Of her fellow volunteers, she says, "None are still working. All were imprisoned, killed or forced to flee."

The last time I saw Kassig was a chance meeting. He had just completed an aid mission to the eastern Syrian city of Deir Ezzor, where he described swimming in the Euphrates River. He even got his paperwork approved by the local civilian council, which governed the opposition-held area where Kassig was working at the time.

"I got my work permit from Deir Ezzor," he said, beaming, visibly exhausted but elated to have cemented his transition from an American in Syria to a certified member of the aid community.

Kassig clearly felt he belonged in the region and called his Syrian friends, and all of us, in the traditional Arabic style: "My brother, my sister."

Alison Meuse works in NPR's Beirut bureau. You can follow her @AliTahmizian.