Accessibility links
As Oil Prices Fall, Who Wins And Who Loses? : Parallels Prices are down 25 percent since June, unleashing ripples around the globe that range from lower gas prices in the U.S. to budget problems in Russia to political pressures in the Middle East. 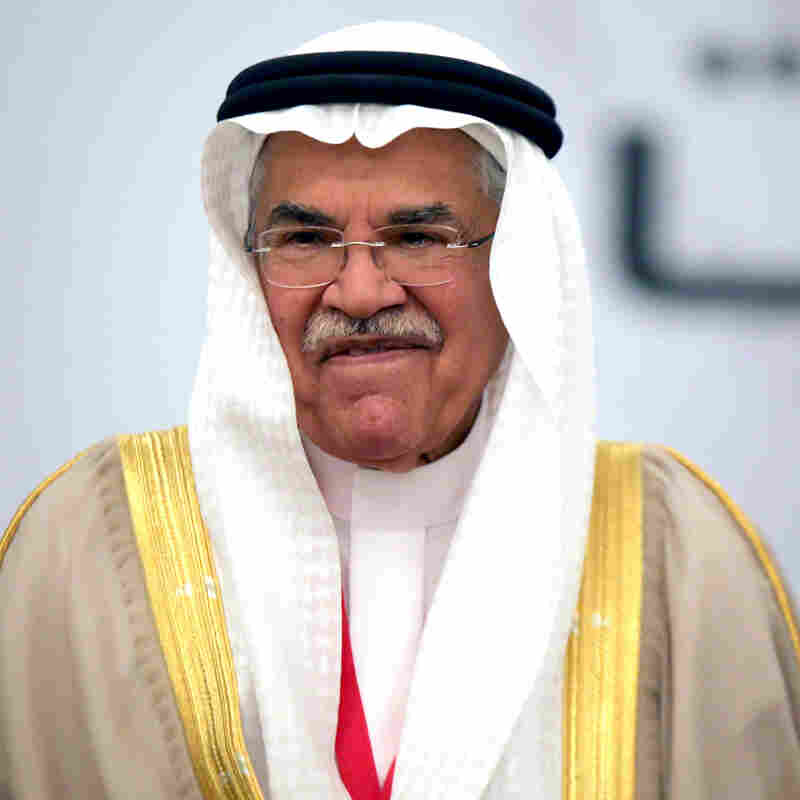 Saudi Arabia's oil minister, Ali Al-Naimi, shown in Kuwait last month, has played down the drop in oil prices. The country continues to pump oil at high levels, saying it wants to preserve its market share. But this has also contributed to a 25 percent drop in oil prices since June. Yasser Al-Zayyat/AFP/Getty Images hide caption 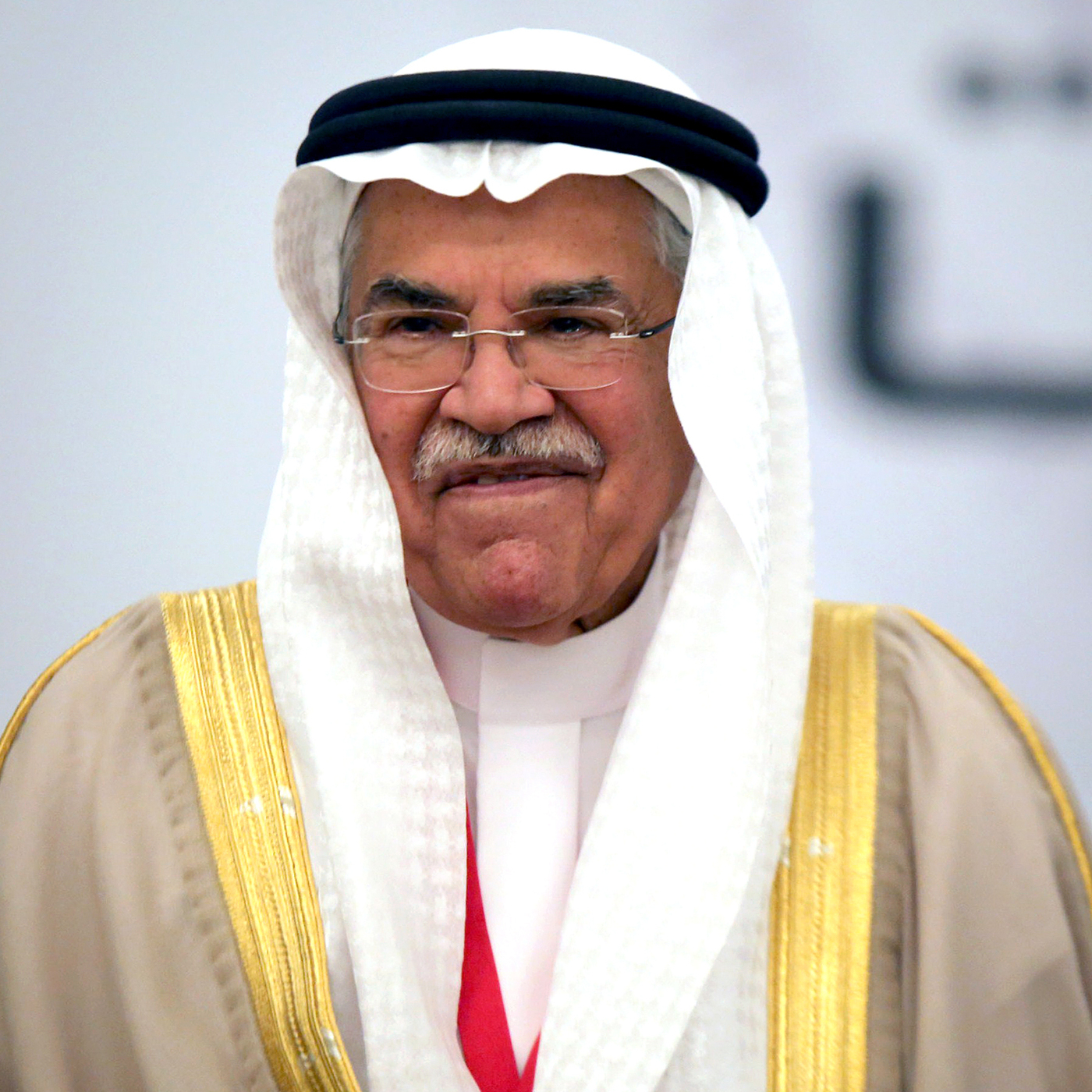 Saudi Arabia's oil minister, Ali Al-Naimi, shown in Kuwait last month, has played down the drop in oil prices. The country continues to pump oil at high levels, saying it wants to preserve its market share. But this has also contributed to a 25 percent drop in oil prices since June.

With oil around $85 a barrel and tumbling to its lowest levels in several years, here's the upside: Gasoline prices are down, the U.S. is feeling less dependent on foreign crude, and serious economic pressure is growing on oil producers such as Iran and Russia.

Here's the downside: The low demand for oil reflects a fragile global economy that's vulnerable to additional shocks, like falling stock markets around the world.

Oil is still a uniquely influential commodity. Whenever prices move sharply in either direction, they unleash ripples around the globe that are both economic and political.

"We've had a three-year period of very stable oil prices," Michael Levi of the Council on Foreign Relations told NPR's All Things Considered. "Three years is a long time. People were starting to believe that this was permanent. And they were wrong. So the big news is that volatility is back, that big swings are what we should expect."

With the prices down around 25 percent since hitting $112 a barrel in June, here's a roundup of the impact worldwide:

In years past, trouble in these countries might have instigated panic in the oil market, driving up prices dramatically. But today, there's plenty of oil to go around for several reasons. Production in the United States is surging, Saudi Arabia and other OPEC countries have continued to pump at high levels, and overall global demand is weak.

While these conditions may not last, they do reflect what's been the steady loss of clout among big oil producers, particularly those in the Middle East.

The U.S. is producing more of its own oil and is buying the remainder from a wide range of mostly stable countries. The leading foreign supplier is Canada. Middle Eastern nations account for just three of the top 10 exporters to the U.S., and they account for around 10 percent of U.S. oil needs. 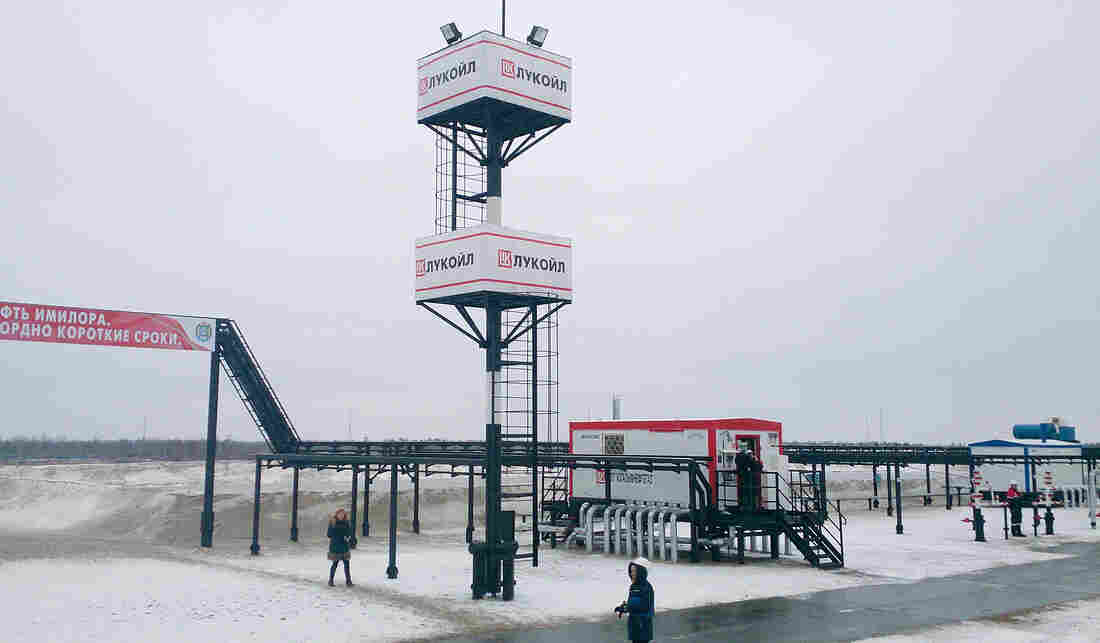 Russia And Iran: From the U.S. perspective, one of the benefits of falling oil prices is the pressure they place on Russia and Iran. Both countries are heavily dependent on oil exports at high prices. They face the double whammy of Western sanctions that are also biting.

Russia needs an oil price of $100 a barrel and Iran needs around $130 a barrel to balance their budgets, according to The Economist.

The financial hurt these countries are facing could have political implications.

Russia is at odds with the West over its annexation of Crimea and its ongoing role in Ukraine's turmoil. Russian President Vladimir Putin has consistently opted for confrontation, but the price for that position is getting steeper. Putin pushed back against a request for higher government spending this week, citing reduced government revenue from energy production.

"You know that energy prices have fallen as well as for some of our other traditional products," Putin said. "Due to that, would we not, on the contrary, reconsider the budget toward reducing some spending?"

Iran, meanwhile, is negotiating on its nuclear program with the international community and is also waging a proxy war with Saudi Arabia for power and influence throughout the Middle East.

This is one likely reason the Saudis have been willing to pump oil at high levels even though that's contributing to low prices. The Saudis publicly cite a business motive, saying they want to maintain their current share of the oil market. But the Saudis are also well aware that low prices mean less money for archrival Iran. 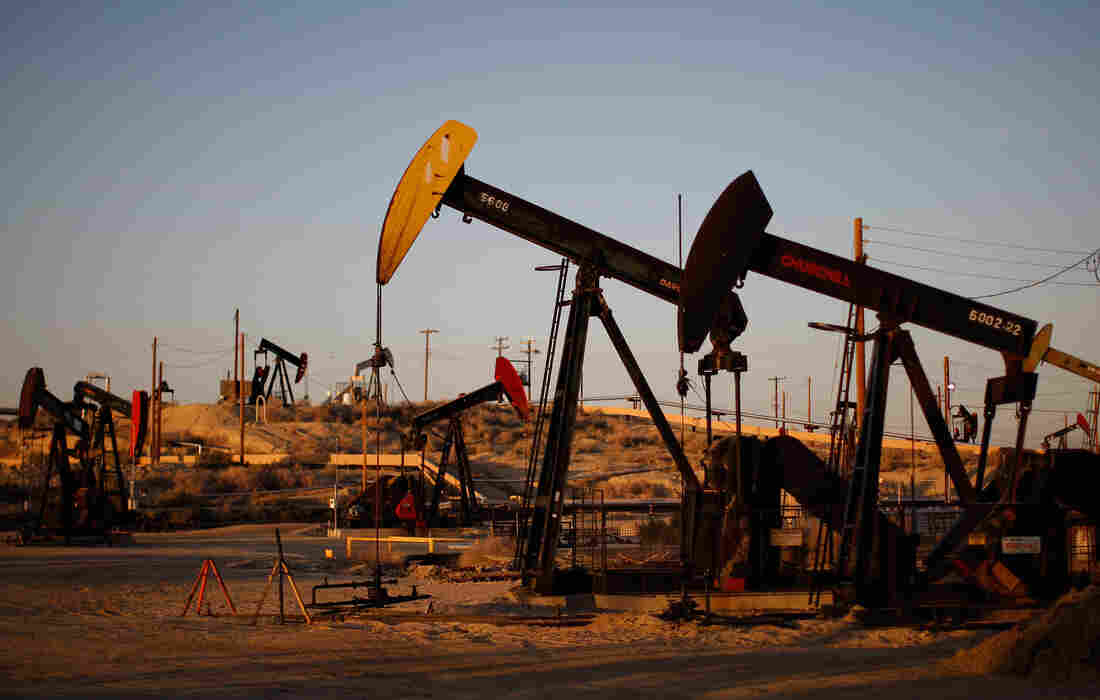 Oil wells near McKittrick, Calif., one of the places where hydraulic fracturing, or fracking, is on the rise. The U.S. became the world's largest oil producer this year, surpassing Saudi Arabia and pumping some 11 million barrels a day. David McNew/Getty Images hide caption 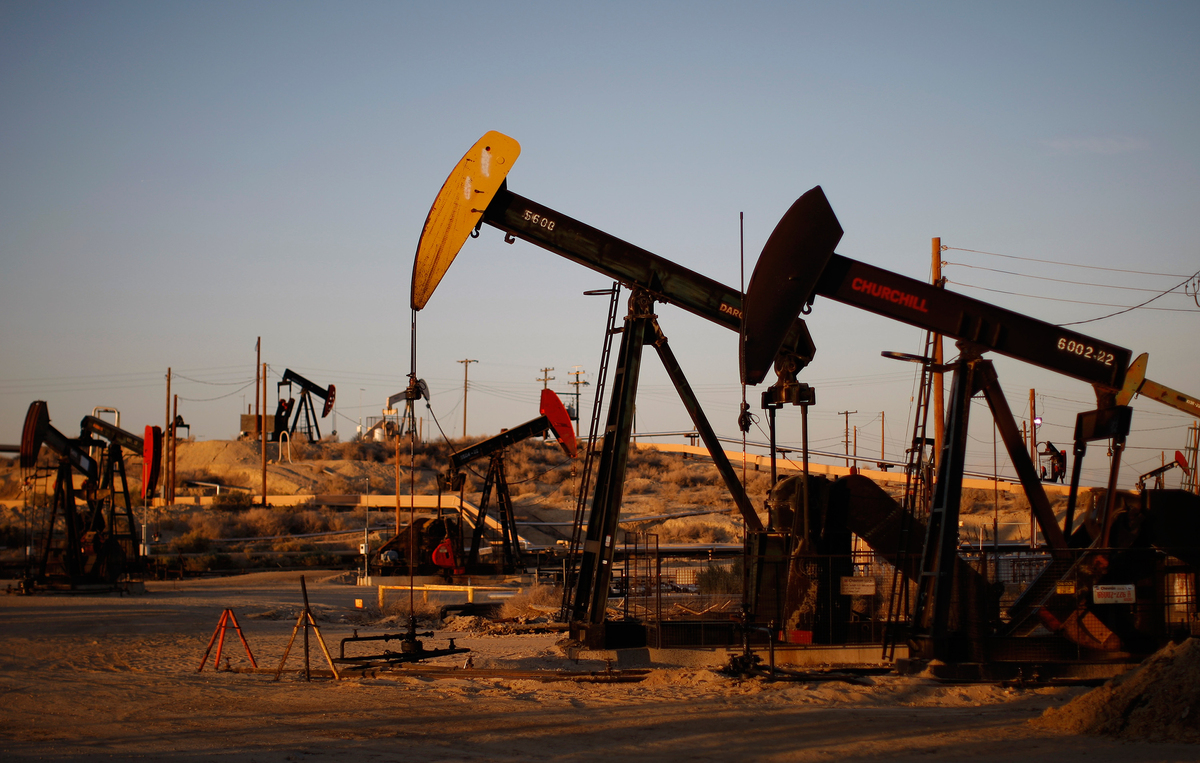 Oil wells near McKittrick, Calif., one of the places where hydraulic fracturing, or fracking, is on the rise. The U.S. became the world's largest oil producer this year, surpassing Saudi Arabia and pumping some 11 million barrels a day.

The average U.S. gas price is $3.17 a gallon this week, down around 15 percent since June, according to GasBuddy.com. The lower price at the pump effectively serves as a stimulus for consumers that can encourage increased spending to stimulate the economy.

"It's quite possible that Christmas shopping will be much better this year because consumers will be spending less for gasoline," economist Philip Verleger told NPR's Morning Edition.

While lower energy prices benefit most of the country, they could deliver a blow to oil-producing states like Texas, Oklahoma and North Dakota. If prices go down and stay down for an extended period, energy companies could cut back on production and investment.

The Global Economy: Lower gas prices are a small consolation if accompanied by a sluggish world economy, and that's what many economists are forecasting. In Europe and Asia, most of the major economies have low or slow growth compared with recent years.

China and India, which were gulping down imported oil as their economies raced ahead, have both seen slowdowns. The lower oil prices will help keep their manufacturing and transportation costs down, but that alone is not enough if the rest of the world is less interested in buying their exports.

Of course, oil prices could reverse direction swiftly and dramatically, as they have many times in the past. Small shifts in world oil production, currently around 92 million barrels a day, often lead to major swings in prices. If, for example, Saudi Arabia chose to cut production, or the fighting in Iraq shut down its oil fields, prices could head north in a hurry, according to analysts.

Greg Myre is the international editor of NPR.org. You can follow him @gregmyre1.