Accessibility links
Understanding The Kurds' Different Roles In Different Conflicts : Parallels The Kurds are deeply involved in the current conflicts in Syria and Iraq. But their roles vary in countries throughout the region, so we wanted to step back and take a broader look at the Kurds. 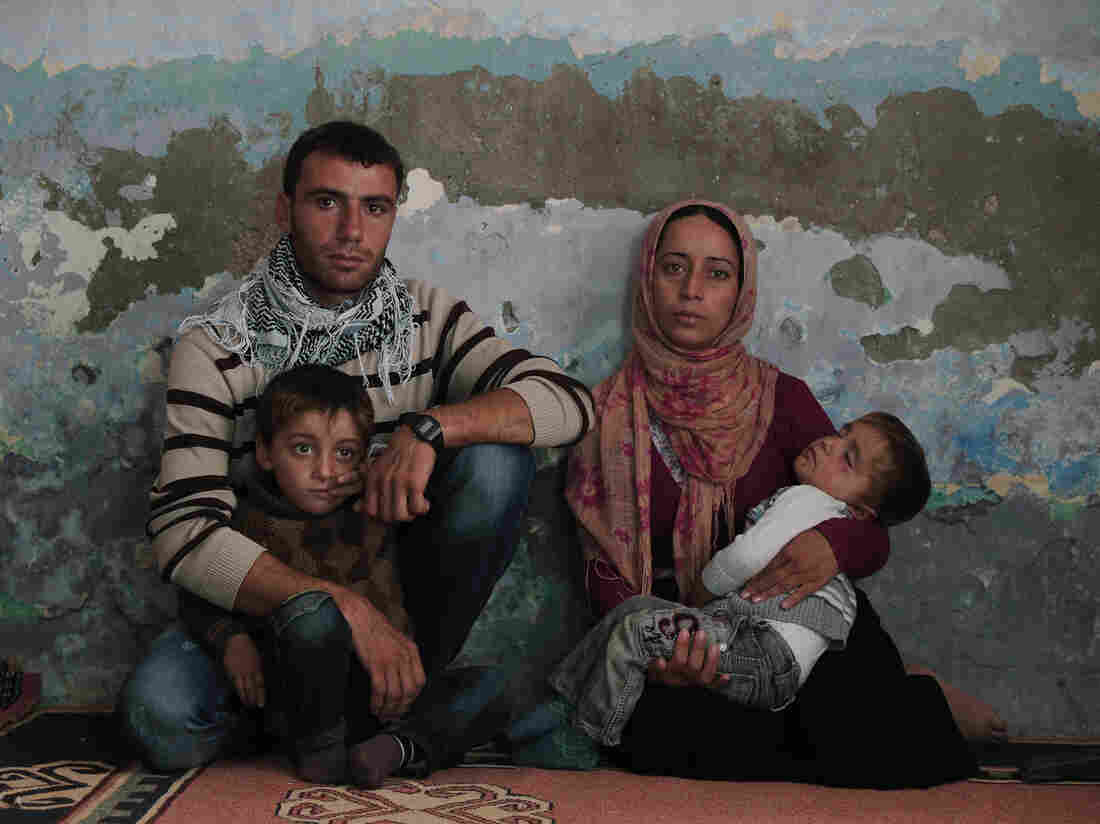 Syrian Kurdish fighter Delkhwaz Sheikh Ahmad, 22, sits with his wife Siham, 23, and their two sons, Dilyar and Ibrahim, at his brother's house on the Turkey-Syria border on Friday. He was preparing to leave for Kobani, Syria, to rejoin the fighting against the Islamic State. Lefteris Pitarakis/ASSOCIATED PRESS hide caption 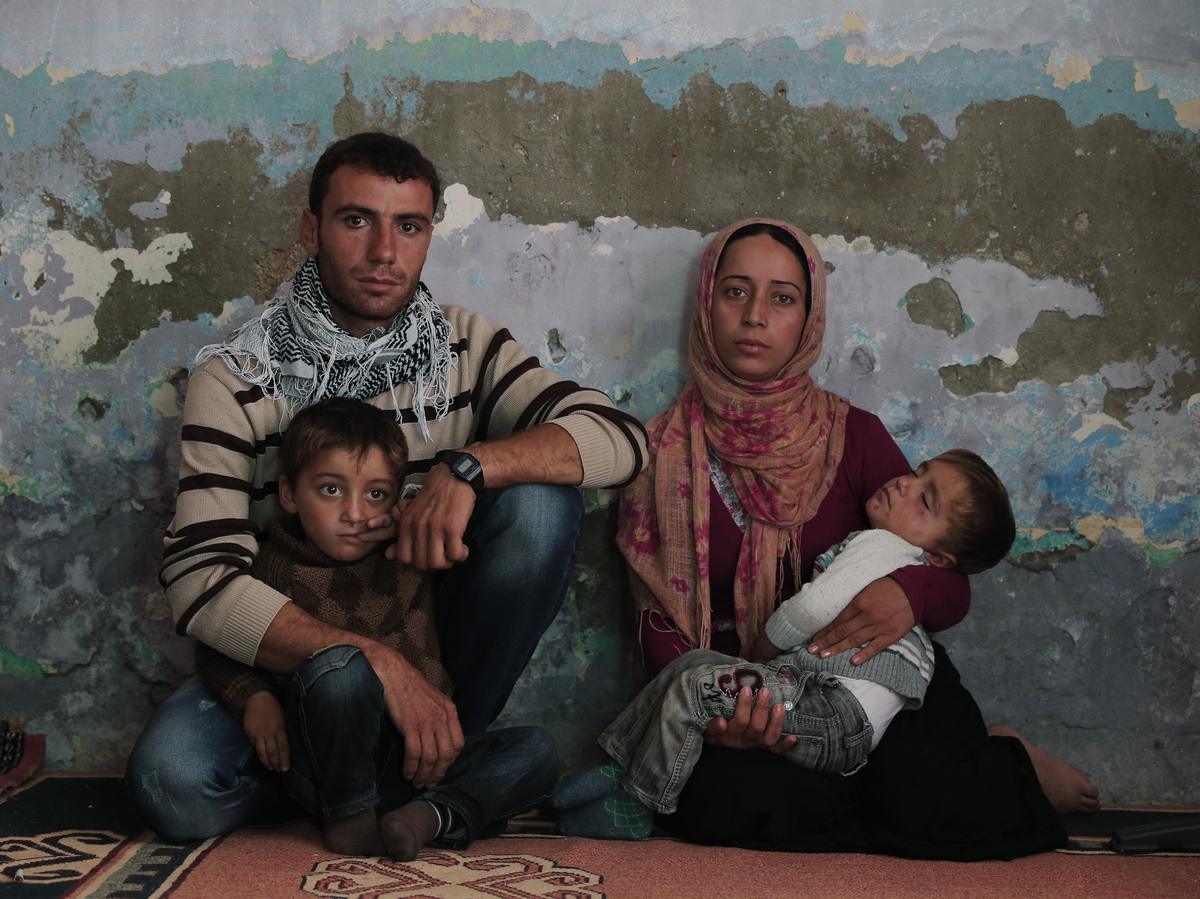 Syrian Kurdish fighter Delkhwaz Sheikh Ahmad, 22, sits with his wife Siham, 23, and their two sons, Dilyar and Ibrahim, at his brother's house on the Turkey-Syria border on Friday. He was preparing to leave for Kobani, Syria, to rejoin the fighting against the Islamic State.

The Kurds are involved in several Middle East dramas at the moment. Yet they live in multiple countries across the region and are playing different roles in different places.

In Iraq, Kurdish fighters are working closely with the U.S. to battle the Islamic State.

In Syria, the Kurds are also fighting the Islamic State, but until U.S. air drops this week, the U.S. had been reluctant to work directly with the Syrian Kurds.

Then there are the Turkish Kurds, who have been seeking to join the battle, but have been blocked from doing so by Turkey.

We thought it was time to step back and take a broader looks at the Kurds. To do that, Morning Edition's Steve Inskeep spoke with NPR Middle East correspondent Deb Amos. 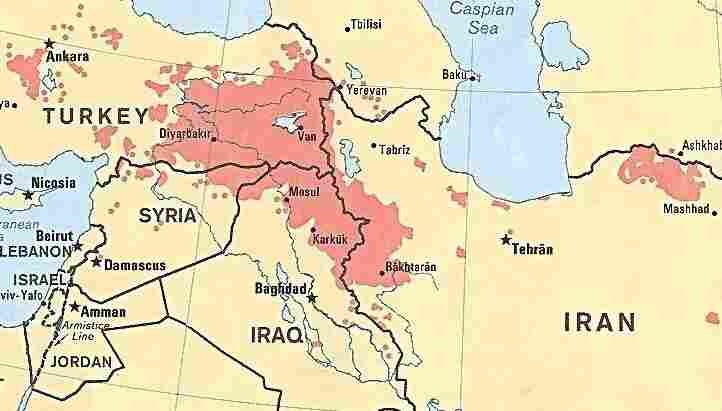 The Kurds are concentrated in four countries in the Middle East — Turkey, Syria, Iran and Iraq. They are a minority in all those states and do not have a country of their own. CIA/Wikimedia Commons hide caption

On How Kurds Became So Scattered

Let's start with what's known as "the Kurdish question." Nearly 100 years ago, after ... World War One, after the collapse of the Ottoman Empire, the Kurds thought they would get a state. That's the question. The answer: they didn't. So, when the borders were drawn by the Europeans it was right through the middle of all these Kurdish enclaves and they found themselves living in four regions: Iran, Turkey, Syria and Iraq.

On Their Current Status In These Countries

This Isn't The First U.S. Rescue Operation In Northern Iraq

Well, the dream of statehood didn't go away, so each country presented its own challenges.

Why Does The U.S. Like Iraq's Kurds But Not Syria's?

In Iraq, Saddam Hussein carried out this genocidal military campaign known as Al-Anfal – and he used chemical weapons against a town called Halabja [in 1988].

In Syria, a lot of Kurds don't have Syrian nationality – no IDs at all. So, when the Syrian revolution began in 2011, President Bashar al-Assad offered them nationality to keep them from joining the revolt.

Now, there's Turkey: There's been a decades-long, violent civil war that defined relations with their Kurdish citizens. It was only about a decade ago that Kurds were even allowed to speak their own language publicly or hear it on TV.

I was at a wedding in 2003. This was a Kurdish wedding. For the first time ever, they could sing their wedding songs in Kurdish. And they did a dance, a Turkish Kurdish dance that (commemorated) ... Halabja, when Iraqi Kurds were hit by chemical weapons.

On Whether The Kurds Are United

Nope. And that makes for very complicated politics, especially in this crisis in Kobani – this enclave in northern Syria [where Kurds are fighting the so-called Islamic State].

Turks says these Syrian Kurds there are terrorists; they are part of the same group that fought in the civil war. Turkey is reluctant to support them and, for a while, the Kurds of Iraq were on the same page. They didn't like those guys either. So, Kobani was left to fend for itself.

But existential threats do unite the Kurds – the chemical attack on Halabja and now Kobani... So, this has redefined identity for Kurds in Syria, Turkey [and] Iraq.