Accessibility links
Why Deflation Is Such A Big Worry For Europe : Parallels Some of the weakest countries, such as Spain and Italy, are experiencing a broad drop in incomes and asset values. Deflation is a painful process that can be hard to reverse once it starts. 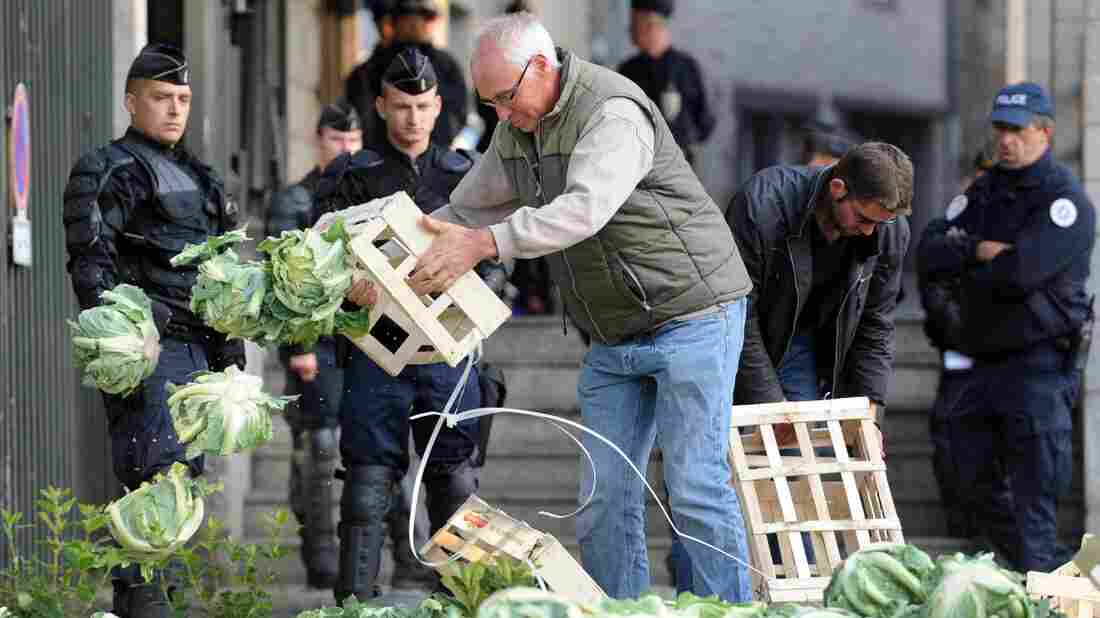 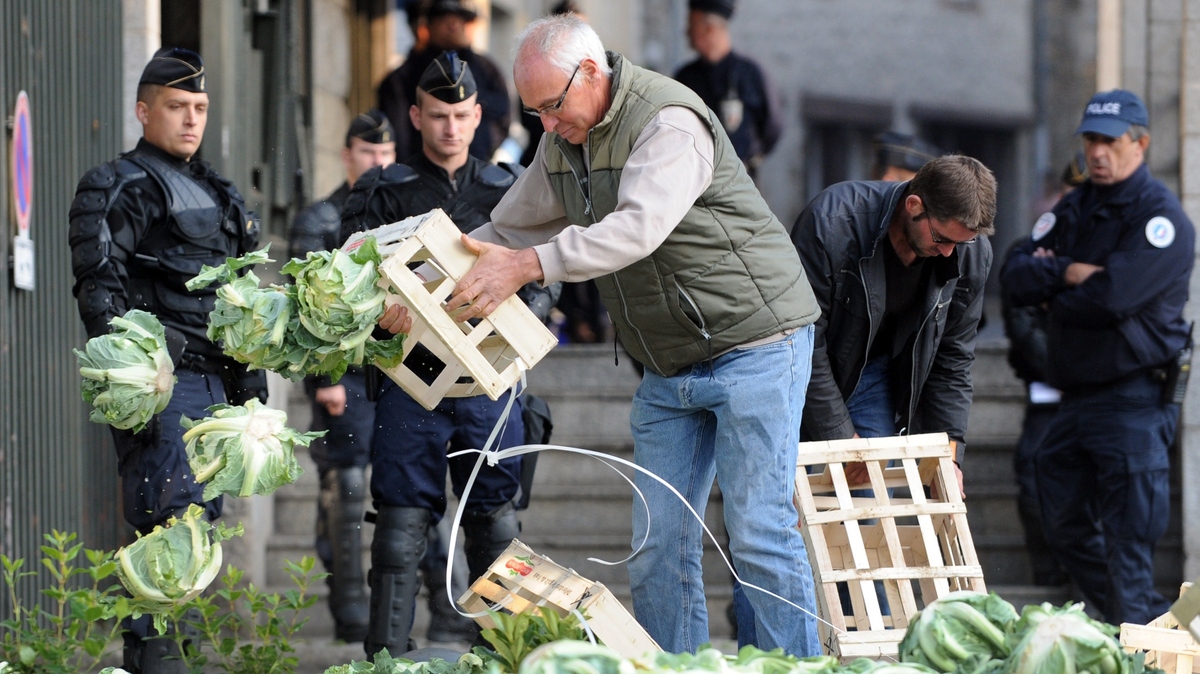 A farmer protesting falling prices dumps cauliflower in front of the prefecture building of Saint-Brieuc in northwestern France as police look on Sept. 24.

Growth is slowing all over the world right now, and that's especially true in Europe. Much of the continent is on the brink of another recession, and even the German economy is sputtering to a halt.

Some of the weakest countries, such as Spain and Italy, are actually experiencing deflation — a broad drop in incomes and asset values. It's a painful process that can be hard to reverse once it starts.

"We've lowered our prices, in various stages, bit by bit," he says. "So now we're charging about 10 percent less than we did a few years ago. It's really difficult because I've got expenses. So it's tough."

Things aren't all bad, however. He says the prices of some of the meats he buys have come down, so his costs are lower too.

"Lamb is more expensive than it was a few years ago," he says. "But beef is a bit cheaper, and so are pork and chicken."

You're Enjoying Low Gas Prices, But Is It Really A Good Sign?

For business owners like Rodriguez, deflation has increasingly become a fact of life — not just in Spain, but in Portugal, Greece and Italy.

"What we have seen is that the countries that experienced the most distress are also the countries where the deflation threat is the greatest," says Ashoka Mody, a professor of international economic policy at Princeton University.

In many parts of Europe, incomes and prices are actually falling. And even in healthier economies, such as the Netherlands, costs are rising more slowly than they were just a few years ago.

That might not seem so terrible, and economist Michael Bordo of Rutgers University says deflation can sometimes be a good thing — if it's caused by something beneficial like falling energy prices. But in a faltering economy like Europe's, it can be a disaster.

Bordo says if people see that prices are dropping, they put off purchases.

And when people in one country put off spending, it hurts the countries they buy from in a way that reinforces itself. It becomes a vicious cycle. And that's exactly what Europe doesn't want to see happening right now.

Princeton's Mody says many of the countries experiencing deflation are among Germany's largest trading partners.

"And we have seen in these last several months that, as a consequence, the German economy has also slowed down considerably," he says.

Deflation can also hurt an economy in another way. When incomes are falling and assets are losing value, it becomes a lot harder for people to pay off debts. If they make good on their debts, they have less money left over to buy things, which only hurts the economy more.

In the end, a lot of people are tempted to walk away from their debts, Bordo of Rutgers says.

As more banks fail, he says, the troubles for the global economy intensify. And Mody says that can cause huge ramifications throughout the financial markets.

"And I think that's the risks that should be of great concern to policymakers on both sides of the Atlantic," Mody says.

The European Central Bank has often been behind the curve when it comes to addressing the region's troubles. The specter of deflation in places like Italy and Spain is one factor that's forcing European officials to reassess their strategy and look for new ways to revive the economy.