Accessibility links
How The Islamic State Wages Its Propaganda War : Parallels From videos to Internet magazines, the extremist group has successfully recruited around the world. One of its recent claims: Enslaving women as a prize of war is sanctioned by the Quran. 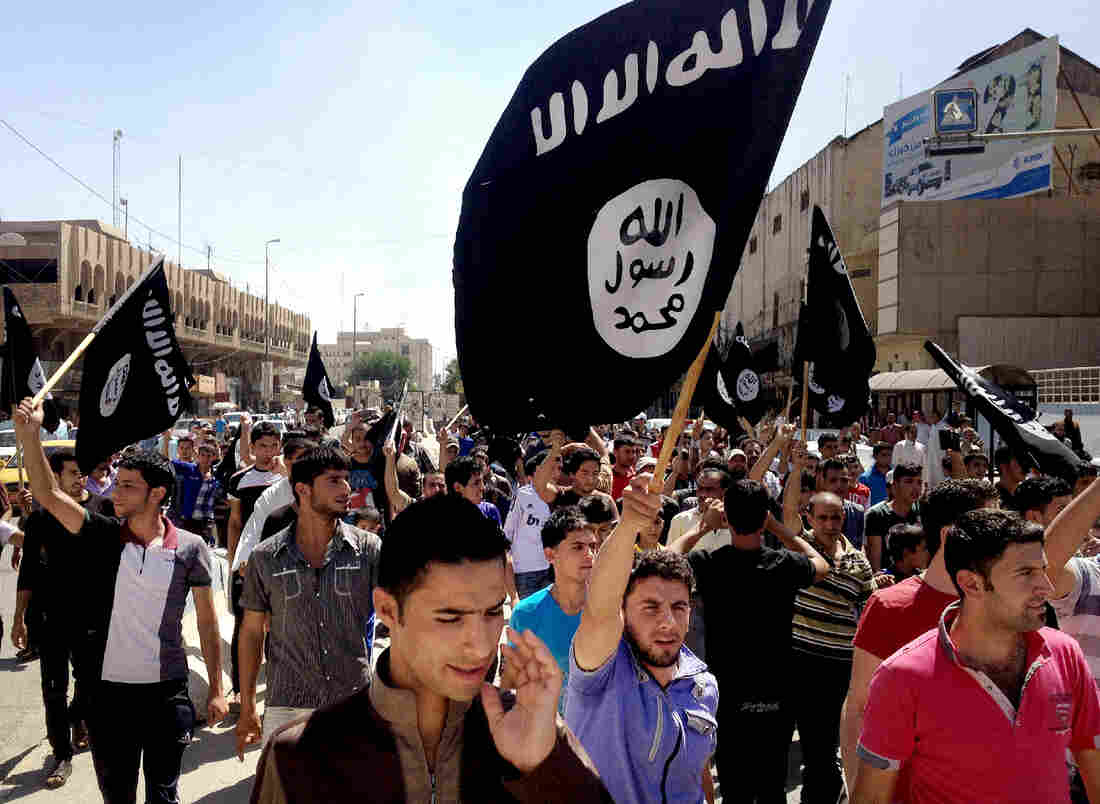 Demonstrators chant in favor of the Islamic State and carry the group's flags in Mosul, Iraq, in June. With videos, Internet magazines and social media, the group has effectively recruited throughout the world. AP hide caption 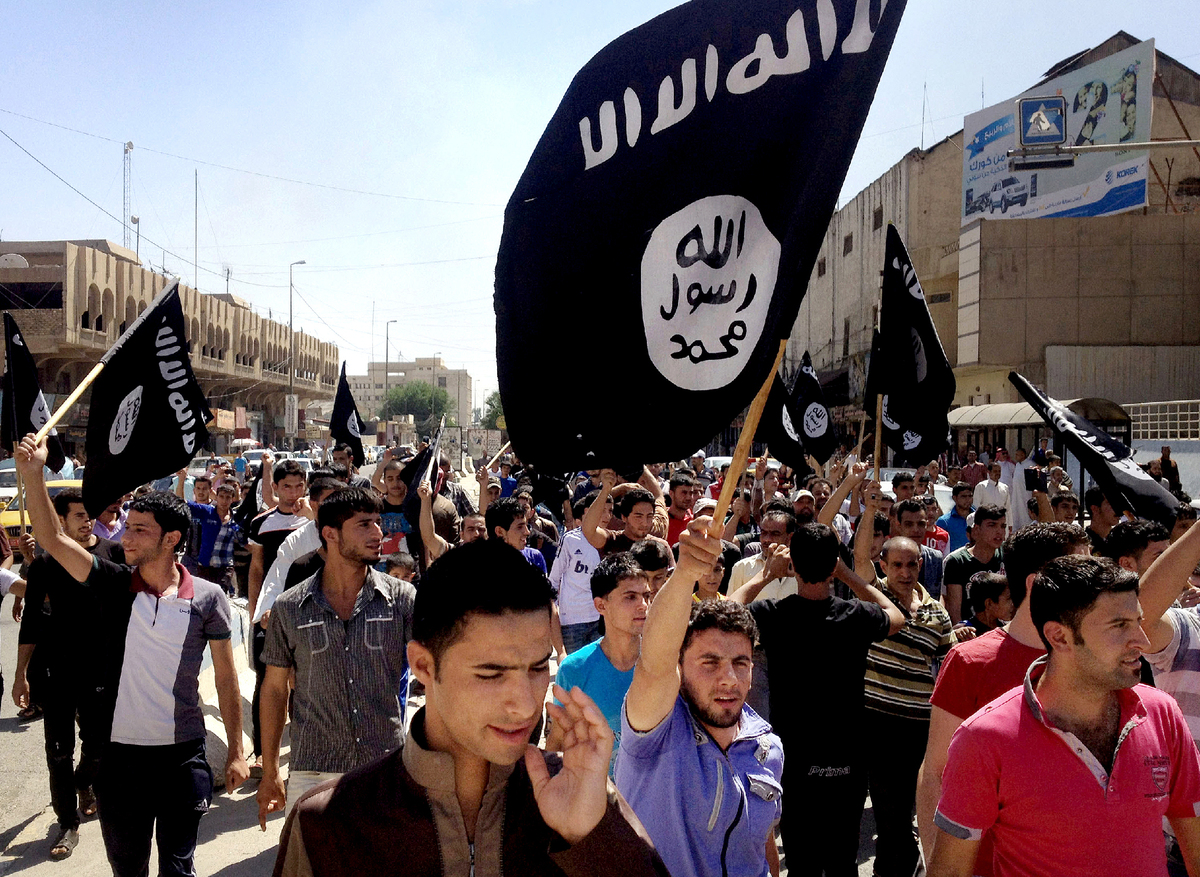 Demonstrators chant in favor of the Islamic State and carry the group's flags in Mosul, Iraq, in June. With videos, Internet magazines and social media, the group has effectively recruited throughout the world.

A troubling video surfaced recently that appears to show a scruffy group of Islamic State fighters cackling about trading women from the Yazidi minority as sex slaves. Though widely watched on the Internet, the video has not been authenticated. There are still questions about who the men are and who made the video.

Still, a larger point is clear. Well before the video emerged, the Islamic State had already endorsed the notion that enslaving women as a prize of war is perfectly acceptable.

Dabiq, the Islamic State's online quarterly in English, French and German, dedicated a section of its latest issue to "The Revival of Slavery." 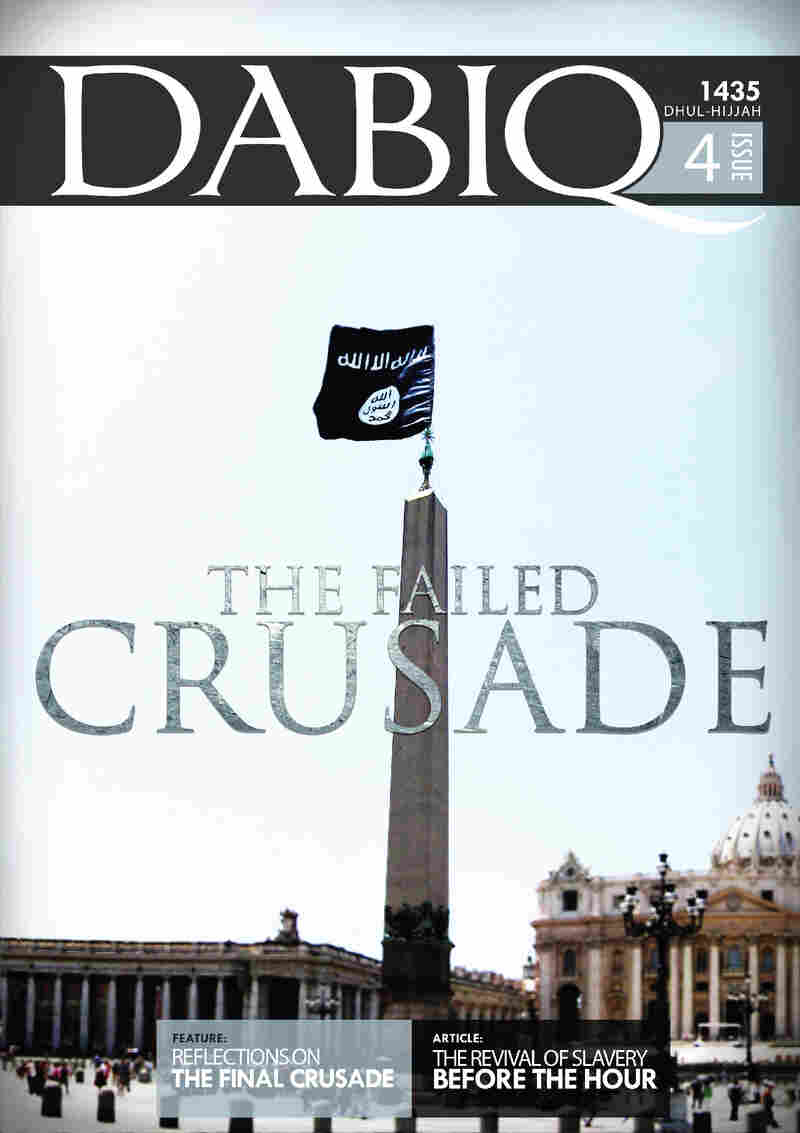 The cover of the latest issue of Dabiq, the official Islamic State magazine. It includes a lengthy article on "The Revival of Slavery," which it endorses. Dabiq hide caption

Employing flowery Islamic terminology and slick design, it defended the enslavement of "nonbelievers," like the Yazidis, as well-established in the Quran.

"One should remember that enslaving the families of the [nonbelievers] and taking their women as concubines is a firmly established aspect of the Sharia," or Islamic law, the magazine proclaims.

And it went further, saying that anyone who questioned the practice of taking concubines in war was an infidel and enemy of the caliphate.

Islamic State leader Abu Bakr al-Baghdadi in June declared the re-establishment of the caliphate, an Islamic system of rule that existed for centuries throughout the Middle East before it died out a century ago with the collapse of the Ottoman Empire.

Since Baghdadi's declaration, the Islamic State's media outlets have been churning out gruesome footage of atrocities as well as corporate-style reports on wheat production and charitable works in the areas under Islamic State control.

The group disseminates its message through its official media outlet, Al-Hayat, as well as YouTube videos and individual Twitter accounts of fighters on the ground.

Over the summer, as the Islamic State advanced along the Iraq-Syria border, Al-Hayat released a video titled "The End of Sykes-Picot," a reference to the 1916 accord that European states used to divide up the region after World War I.

A Muslim fighter from Chile narrates in accented English, occasionally dropping in novice Arabic vocabulary. "This is the so-called border of Sykes-Picot," he explains. "We don't recognize it and will never recognize it. God willing this is not the first border we will break."

Aymenn Jawad al-Tamimi, who researches jihadi and other militant movements for the Philadelphia-based Middle East Forum, says that the use of English is geared toward an international audience, and the target group is already sympathetic to the extremists' ideology.

Tamimi says that the electrifying idea of a caliphate "here and now" is what distinguishes the Islamic State from other Islamist groups.

Meanwhile, Dabiq magazine paints a rosy image of life in the caliphate. With glossy professional photography of lush harvests, maps of its territories and news updates on battlefield advances, the magazine justifies the actions of the jihadis and offers them easy-to-reference, cherry-picked Islamic teachings to fire back at detractors. 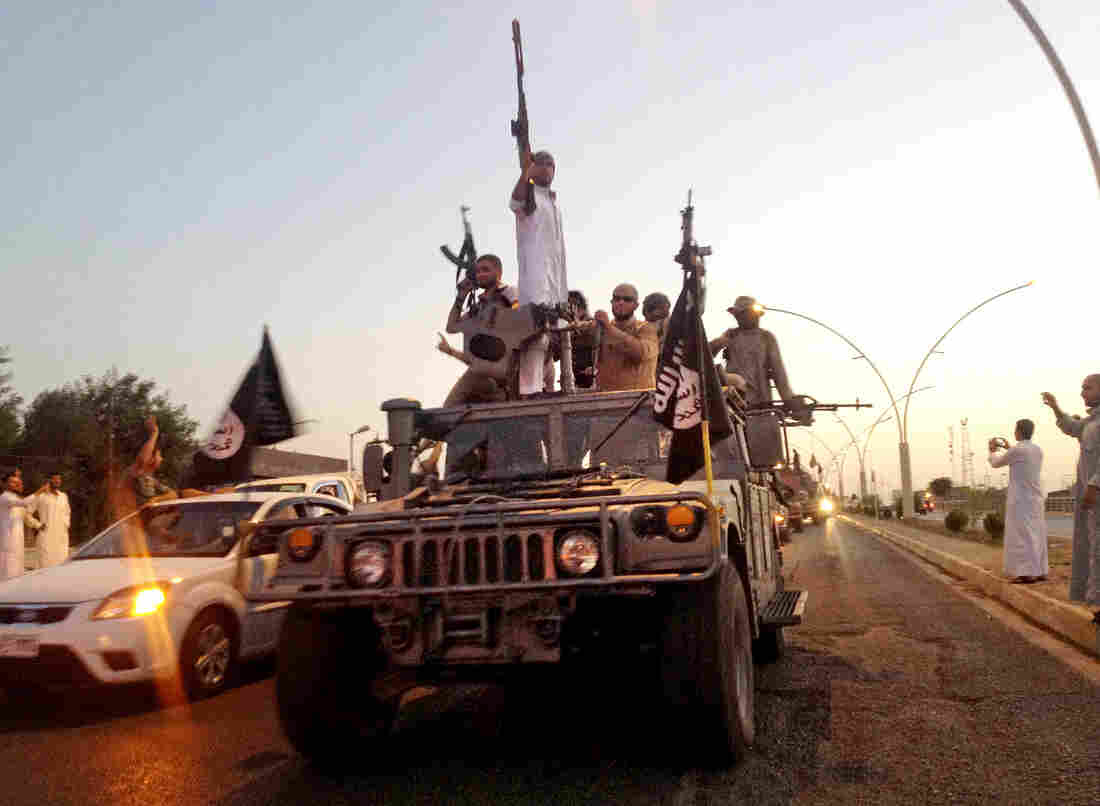 Militants from the Islamic State parade in a commandeered Iraqi security forces armored vehicle on a main street in Mosul, Iraq, in June. AP hide caption

Many Islamic State fighters may not even speak Arabic. But the multilingual propaganda offers them a chance to be part of a Muslim experiment.

This is something that the al-Qaida affiliate in Syria, Jabhat al-Nusra, for example, has not capitalized on. The vast majority of its media are available only in Arabic, making it inaccessible to Muslims from outside the region.

Recruiting In The West

Although the Islamic State's own rank and file are mainly Iraqis and Syrians, the group remains focused on promoting its image farther afield.

Tamimi says much of the Islamic State propaganda caters to what he calls "ISIS fanboys," an unofficial band of Internet-savvy cheerleaders, who then amplify the message on Twitter.

The United Nations estimates that some 15,000 foreign fighters have flocked to join the Islamic State. There are no official numbers, and other estimates have been a bit lower, but all put the figure in the thousands.

The Islamic State gives "an intellectual justification to supporters," Tamimi says. "It seems like those who are born in the West are more conducive to having an identity crisis. You wonder, 'What does it means to be Muslim?' "

The Islamic State offers up its answers.

The propaganda gives the impression that in the caliphate, fresh recruits can shed their old selves to become powerful, feared and well-paid jihadis, bringing the local populations under their version of Islam by force.

They are known as takfiris — someone who declares someone else an infidel, a non-Muslim. This means, among other things, that it's OK to kill him.

"The idea that a Muslim could proclaim any other Muslim an infidel is very powerful for people who feel disempowered in their own country," says Elyse Semerdjian, a professor of Islamic and Middle East history at Whitman College in Walla Walla, Washington.

"You've got disgruntled Muslims coming from Europe and the U.S.," says Semerdjian. "And even Saudis who want to implement a more pure Wahhabism in their government."

Semerdjian says that with the fall of the Ottoman Empire after World War I, with its religious authority, and the rise of nation-states in the 20th century, there was an ongoing battle over who had the power to interpret Islamic texts. The states have tried to push clerics out of the way.

In war-torn countries like Syria and Iraq, groups like the Islamic State have stepped into the chaos to promote their version of Islamic rule.

"There's a lack of authority so [anyone] with a Quran can say: 'This is the proper version of Islam,' " says Semerdjian.

The irony, says Semerdjian, is that many of the Islamic State's punishments have little precedent in past caliphates.

Syria formed an integral part of the Ottoman Caliphate for over three centuries. Semerdjian surveyed the Islamic court records of that time span and did not find a single case of stoning someone to death for an alleged offense.

In the entire Ottoman Empire, scholars found only one public stoning, which took place in Istanbul in 1680, according to Semerdjian.

In contrast, the Islamic State carried out at least three stonings in Syria in 2014.

"When the Islamic State says it's historic, I ask, 'historical for whom?' " Semerdjian says.

Alison Meuse is based in Beirut for NPR. Follow her @AliTahmizian