Accessibility links
In Bolivia, A Child's Place Is In The Market And The Mines : Parallels Other countries have moved away from child labor, but not Bolivia, which has lowered the legal working age to as young as 10. Advocates say the move brings the law in line with harsh reality. 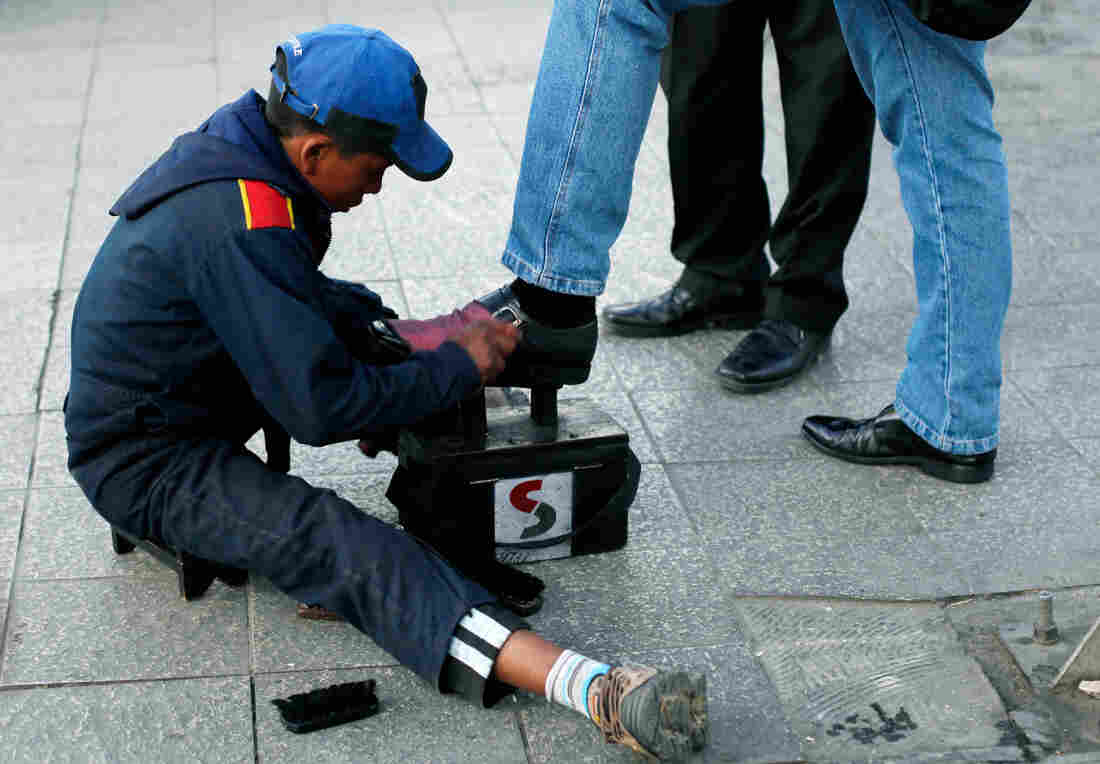 Lucas, 13, polishes shoes on a street in La Paz, Bolivia, in July. Bolivia, where 42 percent of the population lives in poverty, is the first nation to make it legal for children as young as 10 to work. Juan Karita/AP hide caption

In the Bolivian city of El Alto on a recent day, youngsters shout out the destinations of departing buses to lure passengers.

One of these barkers is 15-year-old Luis Canaza. He earns about 12 cents for every bus he fills.

All told, an estimated 850,000 Bolivian children work. They sell food and clothes at outdoor markets. They mine silver and harvest sugar cane.

As the number of child workers falls around the world, Bolivia is moving in the opposite direction. A new law makes the South American nation the only one in the world that legally allows boys and girls as young as age 10 to hold jobs. 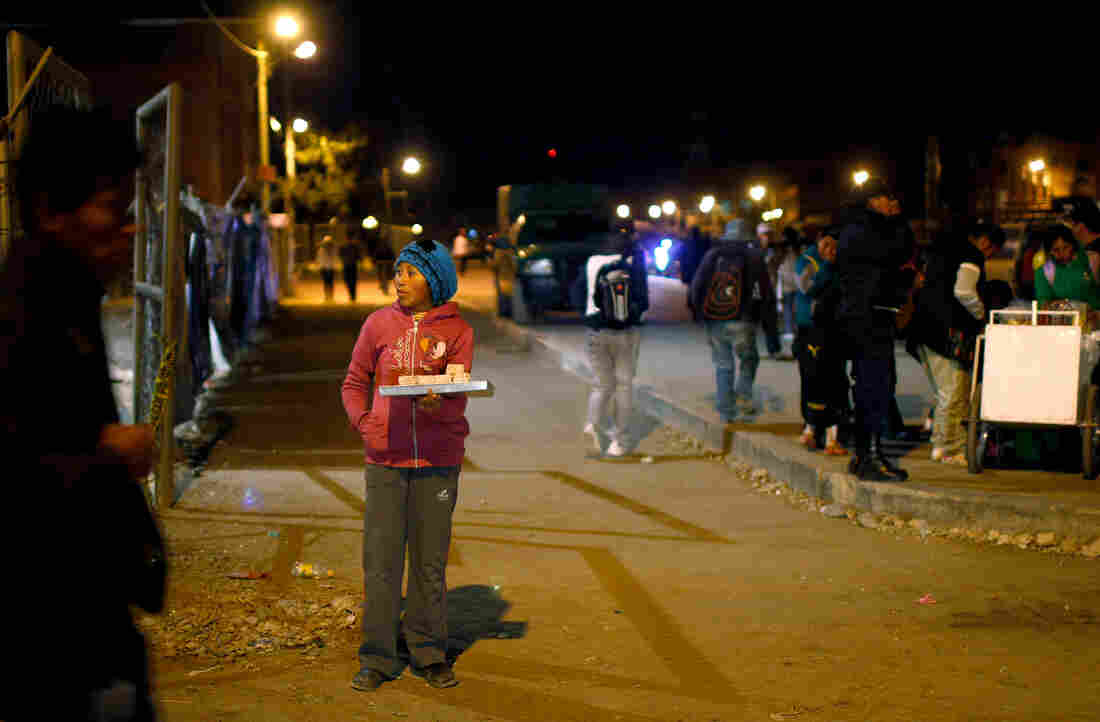 Abigail, 11, sells pastries on a street in El Alto in June. Under the new law, 10-year-olds can work as long as they have parental consent and also attend school. Juan Karita/AP hide caption 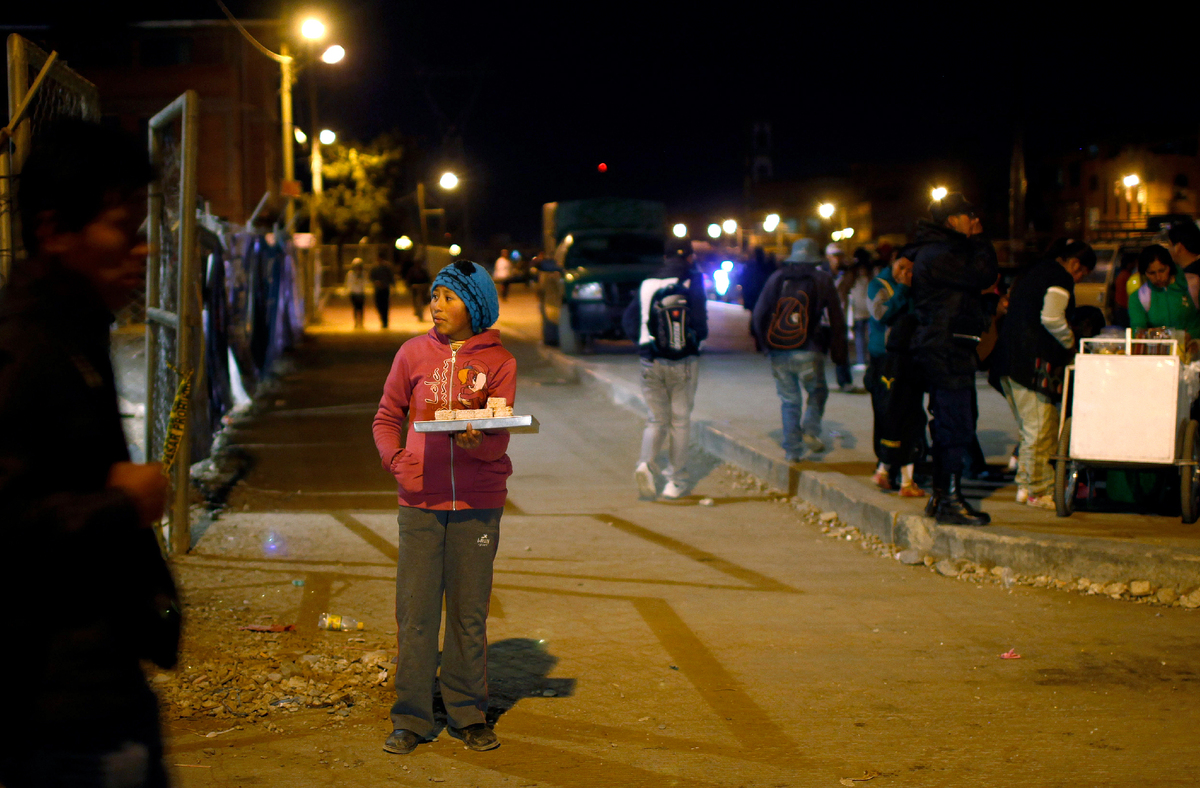 Abigail, 11, sells pastries on a street in El Alto in June. Under the new law, 10-year-olds can work as long as they have parental consent and also attend school.

These young workers have a high-profile role model: President Evo Morales, who is the son of peasant farmers and began herding llamas with his father when he was only 4.

In fact, most child laborers in Bolivia are under 14, which had been the minimum work age. But last year, child workers marched to the presidential palace in La Paz to demand legal recognition and greater protections for under-14 workers — and lawmakers acted.

Now, as long as they stay in school, children who have parental consent may work under contract starting at age 12. Children from age 10 may be self-employed. The law also mandates stiff penalties for employers who abuse child workers.

Communications Minister Amanda Dávila says the law recognizes the harsh realities of a country where 42 percent of the population is poor and children are often expected to help support their families.

"The politically correct thing to say is that kids shouldn't work," Dávila says. "But the government thinks this position amounts to hypocrisy." 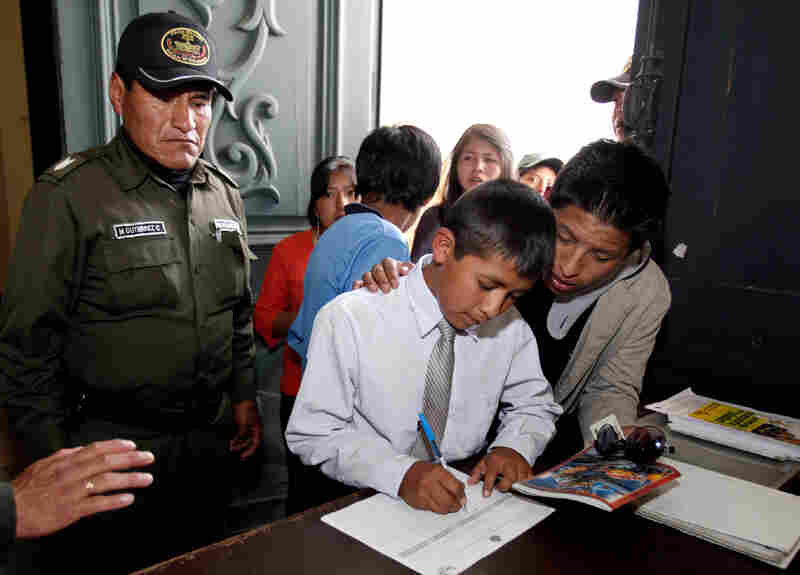 Carlos Cachari Ticona, 12, works with child laborers. He is among the adolescent workers who support the new law that allows kids as young as 10 to work. David Mercado/Reuters/Landov hide caption

Still, the new law puts Bolivia at odds with the International Labor Organization, which stipulates 14 as the minimum work age for developing countries.

"We expressed our concern because ... a 10-years-aged child should have different kinds of opportunities, no?" says Marcoluigi Corsi, the UNICEF representative in Bolivia.

Education is the best way out of poverty, and children who work often fall behind at school, Corsi adds. He predicts the new law will encourage more preteens to seek jobs.

"Actually, you create a situation which is worse than what you have now," he says.

Others say the law will go unenforced. For example, it's easy to find kids working jobs that the government classifies as too hazardous for children. Among them is brick-making, where dust and toxic fumes are part of the process.

At a La Paz brick factory, Hugo Cupana, 9, is one of the workers.

Hugo and his sister work there after school, stacking freshly baked bricks into wheelbarrows and pushing them into the warehouse. They earn about $3 for every 1,000 bricks they move. Fernando Siles, the factory owner, says labor inspectors have never bothered him.

In fact, Siles believes he's doing a good deed and points out that many of these kids are homeless and hungry. By teaching children to make bricks, he says, "we are teaching them to earn their daily bread."