Accessibility links
The American Origins Of The Not-So-Traditional Celtic Knot Tattoo : Parallels The Celtic knot — a pattern of interlocking lines — is centuries old, carved into ancient stones all over Ireland. But that tattoo on your biceps? Like the fortune cookie, American born and bred. 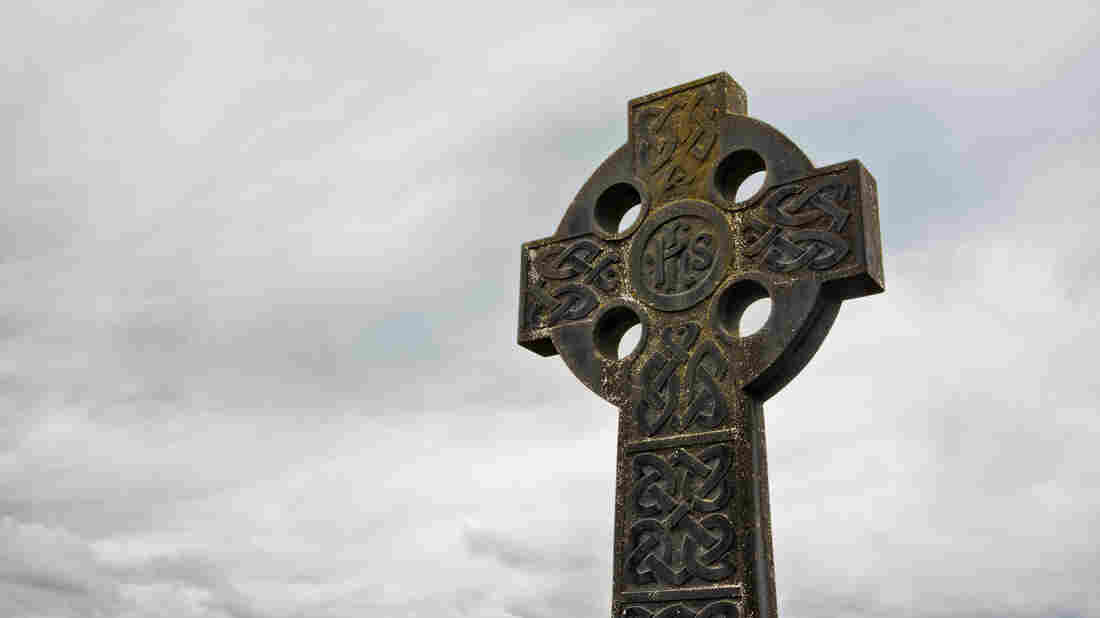 Authentic Irish: A stone cross with Celtic knots in Ireland. The symbol dates back centuries, but as a tattoo, it's popular mostly with Americans. Phillip Spears/Ocean/Corbis hide caption 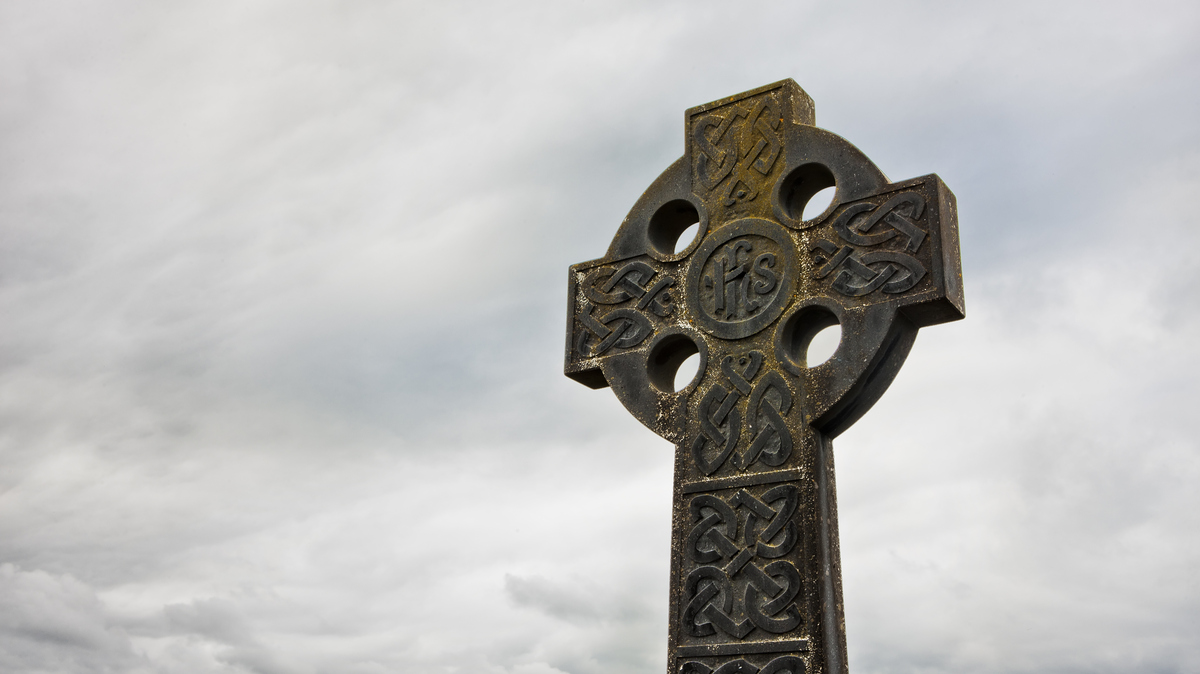 Authentic Irish: A stone cross with Celtic knots in Ireland. The symbol dates back centuries, but as a tattoo, it's popular mostly with Americans.

What is the most cliched tattoo you can think of? Chinese characters? A tribal armband?

How about a Celtic knot? Those interlocking lines that look like ropes or basket weaving.

Last week I was in Ireland and decided to investigate the roots of this trend.

I spoke with Kevin McNamara at the Dublin Ink tattoo parlor.

Without Celtic knots and shamrocks, McNamara said, he would never have learned how to tattoo. 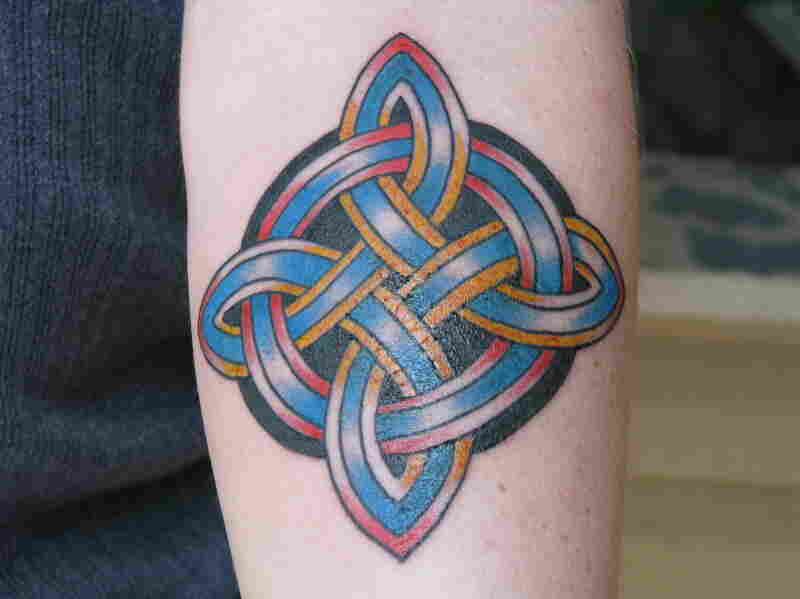 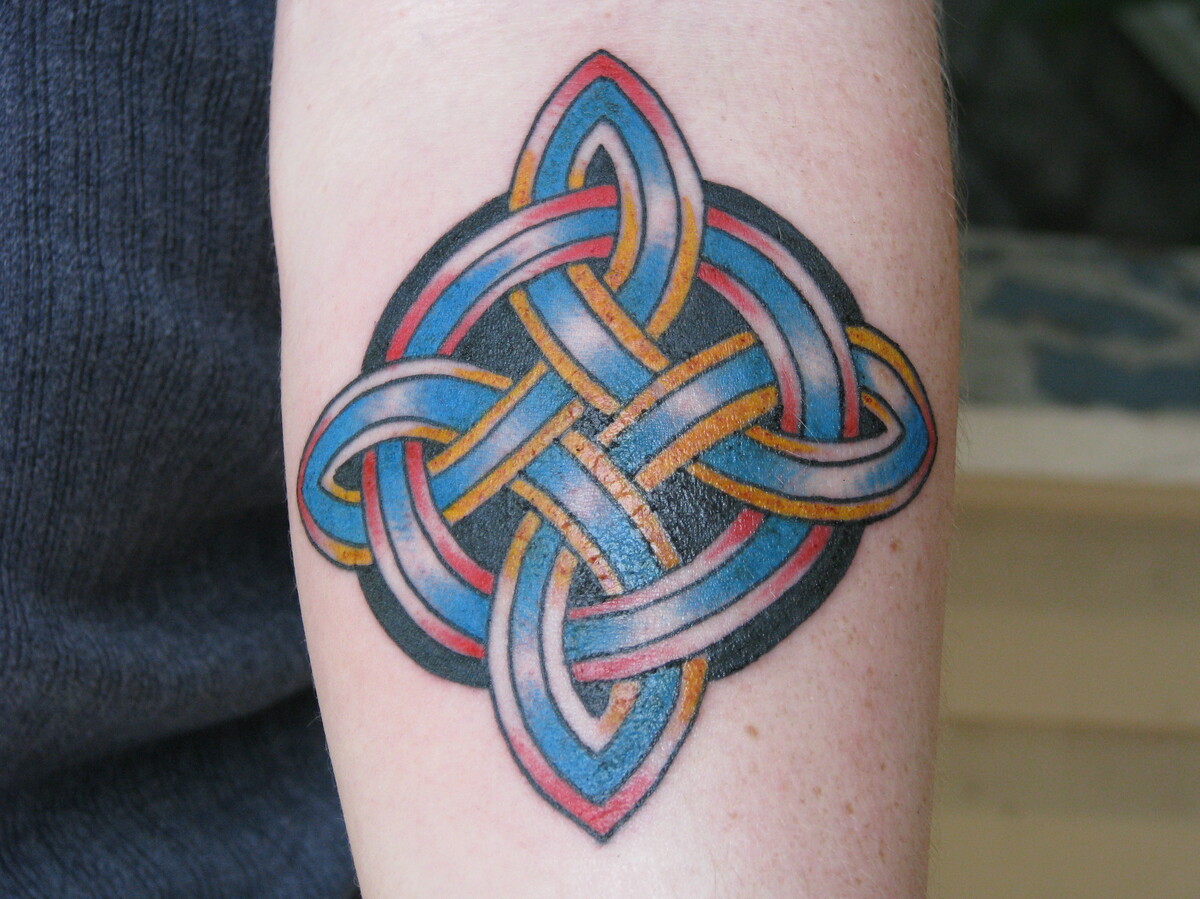 Not-so-authentic Irish: a Celtic knot tattoo. Tattoo parlors in Ireland say almost all the customers requesting this are American.

Now, the Celtic knot is his retirement fund.

He said he can spot Celtic knot customers the minute they walk in the door: young, earnest and almost always American. Other telltale signs: the style of jeans they wear, fanny packs, baseball caps.

"And also they let you know that they're American, you know?" he said. "You don't have to worry about that."

The image of the Celtic knot is thousands of years old. It's carved into ancient stones all over Ireland. But it turns out the Celtic knot tattoo is a bit like the Chinese fortune cookie: American born and bred.

There's actually no evidence of Celtic tattooing, according to Anna Felicity Friedman, a tattoo historian who runs a blog called TattooHistorian. In fact, while people in other parts of the world have been tattooing themselves for thousands of years, the practice only came to Ireland in the last century.

The Celtic knot tattoo seems to have started on the American West Coast in the 1970s and '80s, part of a trend in tattooing called blackwork: big, black geometric designs — much bolder than the old-school mermaid or cobra.

"Blackwork is sort of the more PC term for what used to be called tribal tattoos," Friedman says.

Some of the early designs came from Native American or Aboriginal patterns. The style took off.

Ah, it was the very first one I got. You know, when you're just getting a tattoo and you don't know what to think.

Tattoos that mark heritage have always been popular, says Friedman. Combine the trend in blackwork with a desire to mark European heritage, and you have the Celtic knot, which spread across the U.S. and over the ocean to Europe.

It was sort of the "lite rock" radio station of tattoos: pretty, bland and inoffensive. It could work for women or men. It didn't have biker or sailor connotations. And it implied heritage and history.

At Dublin Ink, Irishman Greg Donne is getting a geometric pattern on his right shoulder. On his left shoulder, an intricate Celtic knot has begun to fade.

"Ah, it was the very first one I got. You know, when you're just getting a tattoo and you don't know what to think," he said.

He was 19, he explained with a shrug.

Tattoo artist McNamara has a lot of ink on his body.

So does tattoo historian Friedman.

But their personal tattoo collections do not include a Celtic knot.

If you have a Celtic knot tattoo, tell us why on Twitter @npratc.