Accessibility links
Has Vladimir Putin Just Overplayed His Hand? : Parallels The Russia leader was riding high at home this year with the successful Winter Olympics and his annexation of Crimea. Now he's staring at a recession and has alienated Western nations that could help. 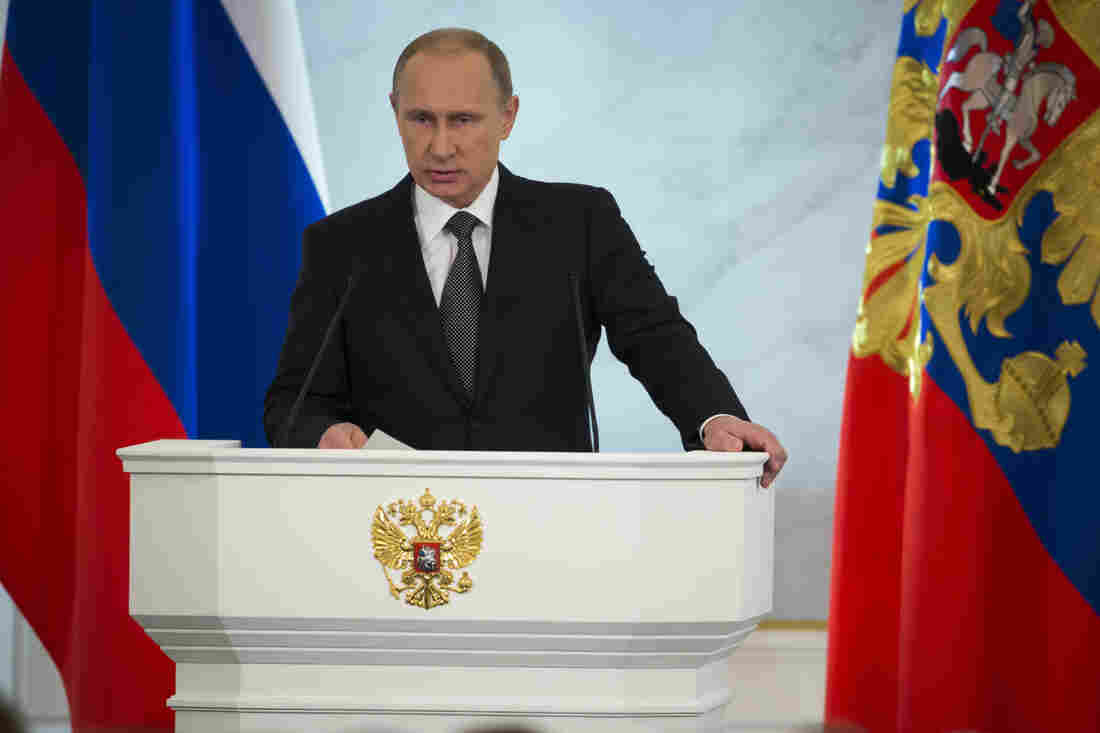 Russian President Vladimir Putin, shown delivering his state of the union speech earlier this month, was riding high this year as the country hosted the Winter Olympics. Russia is now embroiled in economic turmoil, and Putin has alienated Western countries that could potentially help. Pavel Golovkin/AP hide caption 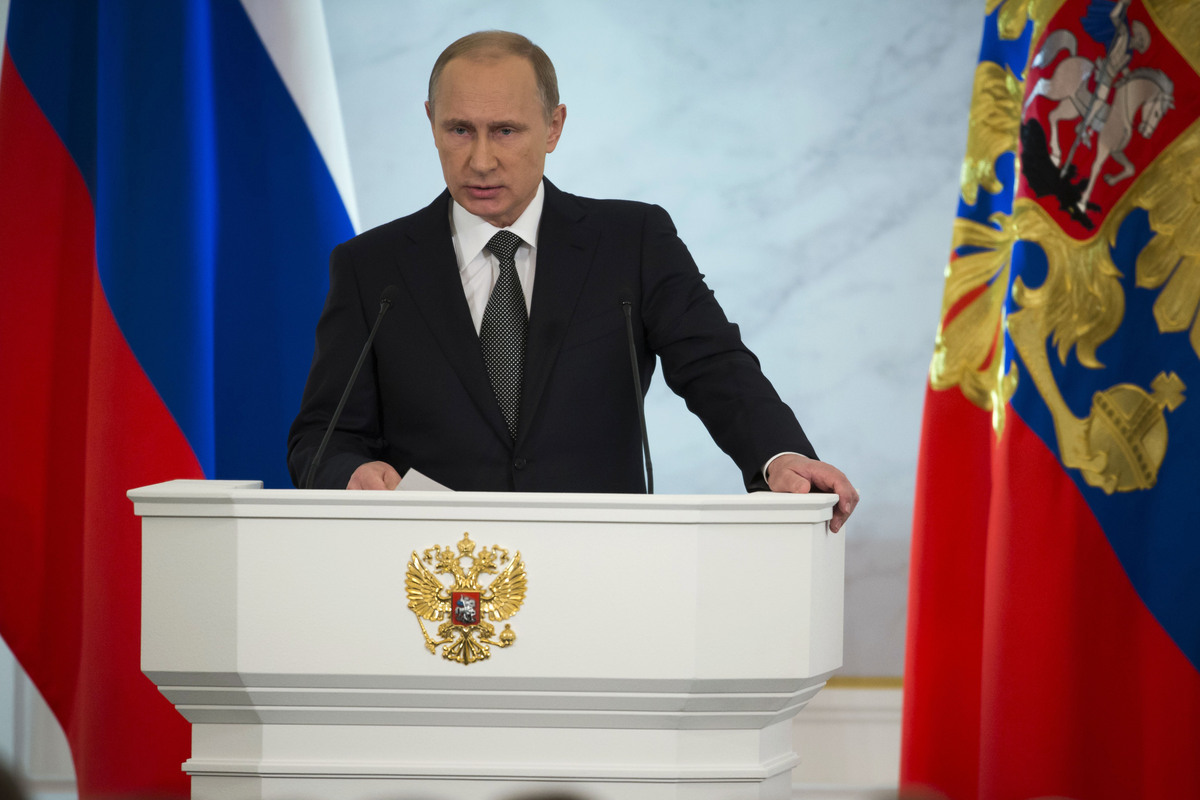 Russian President Vladimir Putin, shown delivering his state of the union speech earlier this month, was riding high this year as the country hosted the Winter Olympics. Russia is now embroiled in economic turmoil, and Putin has alienated Western countries that could potentially help.

Since his return to the Russian presidency in 2012, Vladimir Putin has been on a tear: He has annexed Crimea, crushed opposition at home and challenged the West at most every turn.

With oil seemingly stable at more than $100 a barrel, the government coffers were full, and Putin received mostly cheers at home and few repercussions abroad for his consistently aggressive approach.

Now, with oil prices crashing, the Russian ruble in free fall and Western sanctions biting, the Russian leader is staring at a looming recession and is woefully short on friends willing to lend him a hand.

Putin has always favored grand, sweeping gestures, and his popularity soared inside Russia this year with the successful Sochi Winter Olympics in February, the most expensive Winter Games ever.

Shortly afterward, he responded to the political turmoil in Ukraine by sending in troops to seize Crimea, a move that has been followed by ongoing Russian support for pro-Russia separatists in eastern Ukraine.

As Western criticism rained down on Putin, the Russian leader seemed to relish the confrontation. He countered by saying he was standing up for Russia in the face of Western nations that he sees as trying to diminish his country.

"Putin has, in effect, launched a vast experiment into whether it is possible to extract a large and relatively well-integrated country from the global mainstream, and to reject the rules by which that mainstream runs," U.S. commentator Anne Applebaum wrote recently in Britain's Spectator.

As he made one bold move after another, Putin apparently didn't factor in an oil market that was about to head south.

All of a sudden, Russia is scrambling to control the economic damage. On the Internet, Russia is now being called a "submerging economy."

In recent days, the joke in Russia was that Putin, the Russian ruble and the price of oil were all going to hit 63 next year. The punch line is already outdated.

Oil, which was trading at well over $100 a barrel this summer, was below $60 on Tuesday. If it stays around that level next year, as many are forecasting, Russia's economy could contract around 4.5 percent, according to Russia's central bank.

The Russian ruble, which was hovering around 35 to the U.S. dollar this summer, hit another all-time low at more than 70 to the dollar on Tuesday despite Russian intervention aimed at halting the slide.

Russians have been through currency collapses before, and they knew how to react this time. Many rushed out to buy appliances, furniture and even cars with rubles whose value was fast evaporating. 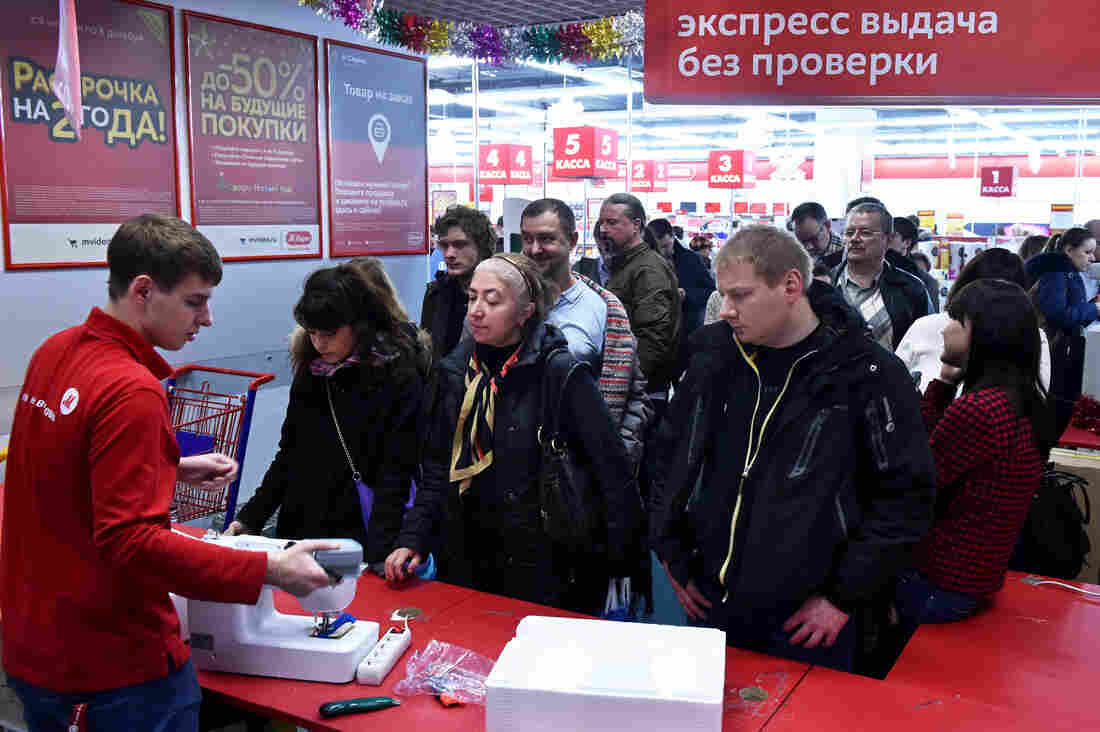 Customers line up at an electronics store in Moscow on Monday. With the value of Russia's ruble declining rapidly, prices are expected to soar, and many shoppers are frantically spending their money on electronics, furniture and even cars. Kirill Kudryavtsev/AFP/Getty Images hide caption 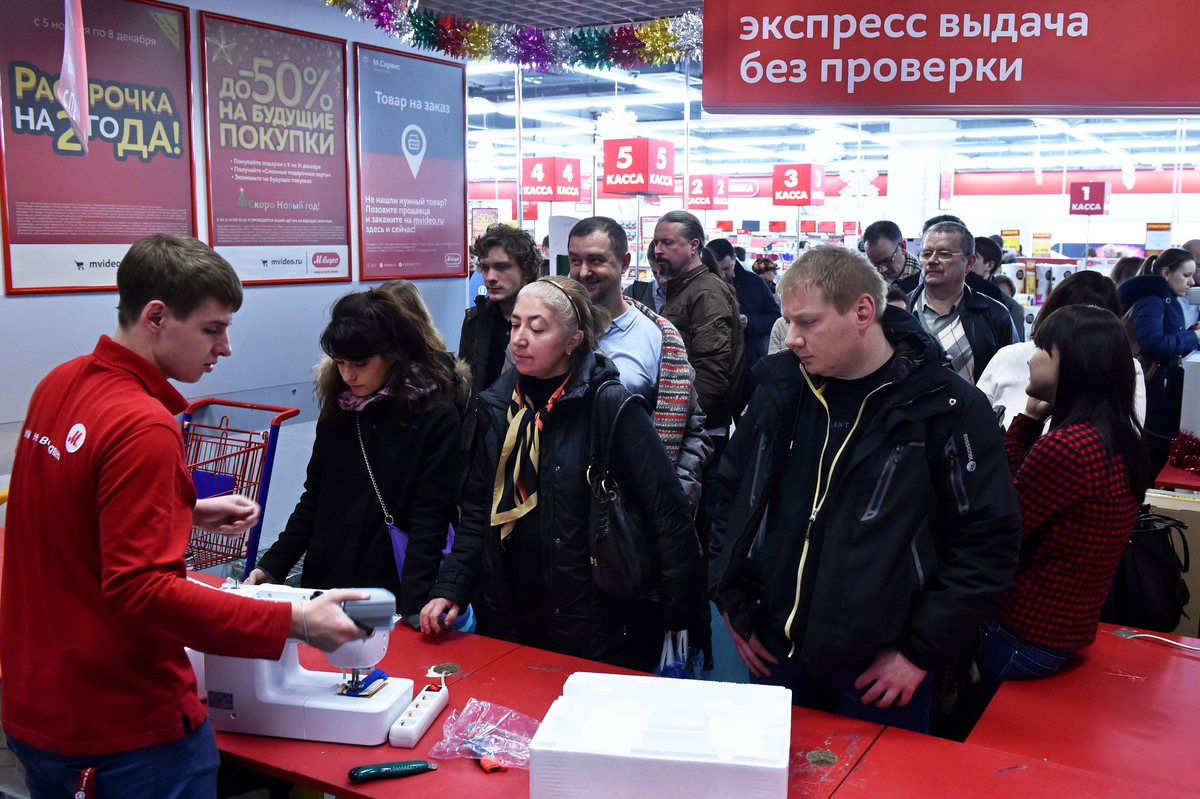 Customers line up at an electronics store in Moscow on Monday. With the value of Russia's ruble declining rapidly, prices are expected to soar, and many shoppers are frantically spending their money on electronics, furniture and even cars.

Russia's central bank raised its key interest rate Tuesday from 10.5 percent to 17 percent. Moves like this are virtually certain to choke off economic growth in the coming year or so, but Russia is engaged in a much more immediate struggle to keep its financial system from imploding.

Ian Bremmer, the president of the Eurasia Group, a consulting firm, summed up the financial dangers facing Russia in one tweet:

Bremmer was referring to Russia's economic meltdown in 1998, when interest rates reached 100 percent annually, Russia defaulted on its debt, and its economic woes spread to other developing economies.

There's one big difference today. Back then, Russian President Boris Yeltsin was on good terms with the West, which came rushing in with billions of dollars to help stabilize Russia's economy. It was a painful period for Russia, but eventually the crisis eased, and the following year Yeltsin named a new prime minister — Vladimir Putin.

Putin's antagonistic relationship with the West means no such help is likely this time. And Russia's 1998 debt default is also likely to discourage anyone inclined to throw Putin an economic lifeline today.

Meanwhile, Crimea now looks much more like a liability that Russia still needs to subsidize with billions of rubles it doesn't have.

The U.S. and Europe slapped sanctions on Russia after Putin seized Crimea, and his response was to punch back, banning Western food imports. That move contributed to rising food prices. Even if Putin lifted the import ban now, Western goods would cost twice as much compared with this summer due to the ruble's tumble.

Putin has been the most powerful figure in Russia for 15 years, alternating as prime minister and president since 1999. Under his rule, Russia's economy has had ups and downs. But throughout, the government has maintained a large role in an economy that is still hugely dependent on extracting raw materials from the ground. Roughly half of the government budget comes from oil and gas taxes, and the budget is predicated on an oil price of $100 a barrel.

As the storm clouds gathered this year, the country has been hemorrhaging capital, with many of the country's rich moving cash and assets abroad in an effort to protect it.

To both supporters and critics, Putin was seen as riding high in the early months of this year, a force to be reckoned with regardless of how one felt about his policies. Suddenly, he's been substantially weakened by the dramatic swing in one global commodity and finds himself at odds with much of the international community that he needs to help him.

"If nothing else, we have learned that it is very expensive to break international economic rules and to live without allies," writes Applebaum, a tough critic of Putin.

Greg Myre, the international editor for NPR.org, was based in Moscow from 1996-99. Follow him @gregmyre1.