Accessibility links
The 85-Year-Old Widow Who's The Symbol Of Spain's Economic Woes : Parallels Carmen Martinez Ayuso was evicted from her apartment because her son took out a loan he couldn't repay. Now she's been the recipient of unexpected kindness this holiday season. 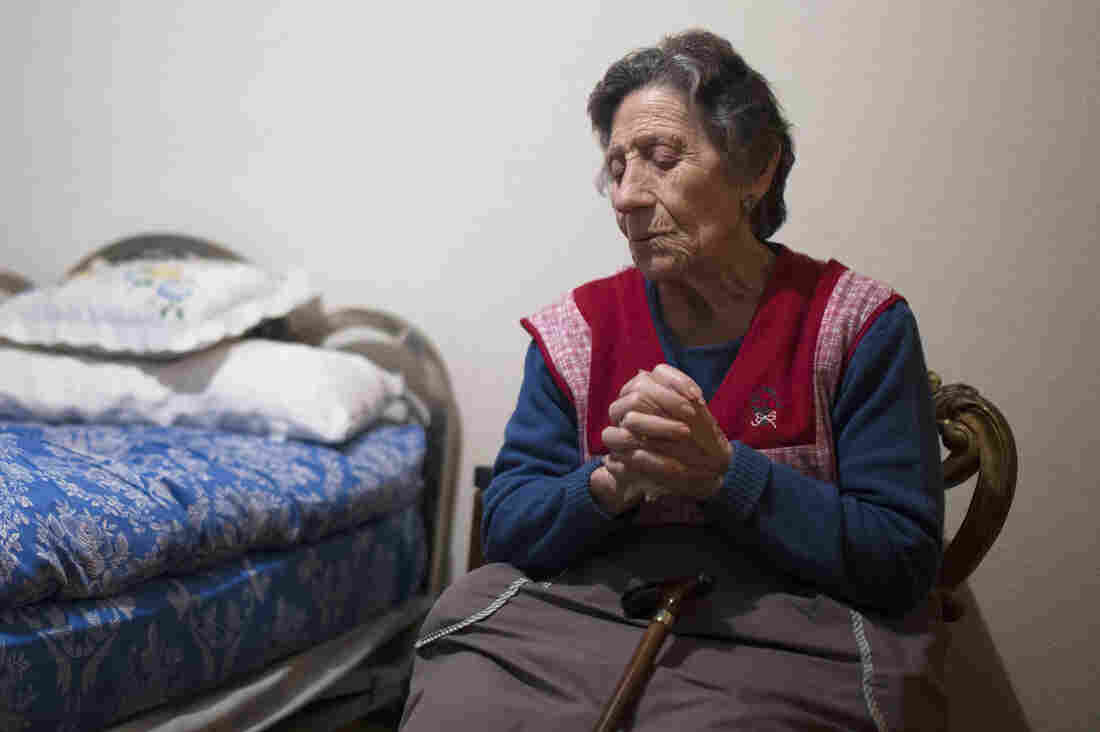 Carmen Martinez Ayuso, 85, prays during her eviction from her home in Madrid on Nov. 21. A professional Spanish soccer team, Rayo Vallecano, has come to her aid, promising to pay her housing costs for the rest of her life. Andres Kudacki/AP hide caption 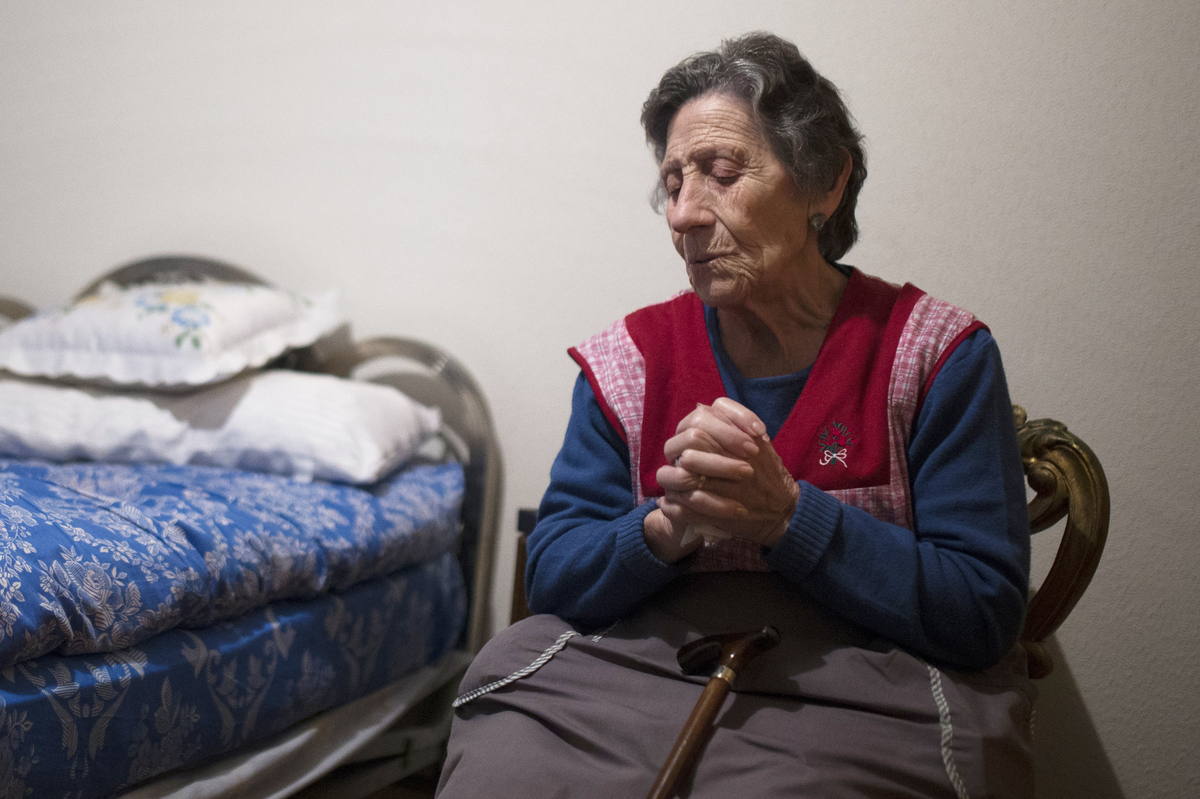 Carmen Martinez Ayuso, 85, prays during her eviction from her home in Madrid on Nov. 21. A professional Spanish soccer team, Rayo Vallecano, has come to her aid, promising to pay her housing costs for the rest of her life.

Carmen Martínez Ayuso lived a quiet life in her modest apartment in the southern suburbs of Madrid for 50 years. But at 85, she recently became a household name in Spain.

Now her anguished face is splashed across Spanish newspapers' front pages. She's a reminder that despite statistics showing the Spanish economy is on the mend, many people are still suffering.

Carmen — as she's come to be known in Spain, by a single moniker, like everyone's grandmother — is the latest victim of home evictions.

When the country's housing bubble burst in 2008, it sparked a wave of foreclosures. Tens of thousands of Spaniards have lost their homes.

Even though Spain's economy is officially out of recession, it's still common to see dozens of protesters amassing on a residential street, trying to block police from entering an apartment building to evict residents.

There have been highly publicized cases of people committing suicide as police mount the stairs.

Last month, protesters gathered outside Carmen's home in Vallecas, a working-class neighborhood in southern Madrid, to try to stop police from serving an eviction notice. But it was to no avail. She was escorted out of the home where she lived for half a century.

"My life, it's destroyed!" Carmen told reporters a few days later. "When you have only one thing, your home, and they take that away — what are you supposed to do? Start over, at my age?"

Amid a wave of foreclosures and evictions in recent years, Spain's government has put in place some legal protections for victims. People who are elderly or disabled, or who care for disabled dependents, are given more time to pay their debts before losing their homes.

Because of her age, Carmen wouldn't normally be evicted if hers were a case of simply defaulting on her mortgage. But her case was different. Her only son, Luis Jiménez Martínez, had used Carmen's apartment as collateral on a private loan. Then he went through a difficult divorce, and also lost his job. The private lender took Jiménez to court, and his mother was eventually evicted. He hadn't even told her about the loan.

"I never meant for this to happen to my mom," Jiménez said, looking at the floor. "The loan was only for a few thousand euros, and back then I had a job. But the loan amount ballooned when I could no longer pay, and now I owe something like $85,000."

A Soccer Team To The Rescue

Now Carmen is homeless, staying with relatives. But she's found an unexpected guardian angel right in her same neighborhood — a professional soccer team.

Rayo Vallecano is one of Spain's poorest teams. Its stadium is in Carmen's poor, working-class neighborhood, one of the worst-hit by Spain's economic crisis, with unemployment above 30 percent. But the team manages to compete in Spain's top soccer division.

After Carmen was evicted, Rayo Vallecano soccer fans held up banners at their stadium, in solidarity: "Rayo against evictions!" and "Carmen should stay!" they read.

Then the team's management made an offer: to pay Carmen's housing, for the rest of her life.

"She was helping her son — it's what anyone would have done," the team's coach, Paco Jémez, told reporters. "So in turn, we're going to help this woman. Not only me and the team managers — but the players themselves are donating money from their wages. We're going to find her a place to live in dignity. So that she knows she has not been abandoned."

A Symbol Of The Crisis

The team set up a donation fund for Carmen, so that soccer fans or concerned citizens can donate too. Carmen has also received help from Spain's Mortgage Victims Platform, a grass-roots group formed in the wake of the housing market's collapse. It has local branches in most Spanish cities.

"There are so many Carmens in this country. Her case made headlines because of her age, and how this soccer team has graciously intervened," said association volunteer Cristina Escribano, who counsels people in debt and helps them come up with payment plans and negotiate with banks. "This is a solution for Carmen, but not for the thousands of Carmens still in need."

Article 47 of the Spanish Constitution says all citizens have a right to "adequate and dignified" housing. Activists like Escribano want the Spanish government to step in and guarantee that right in the wake of the housing bubble's collapse and so many foreclosures.

"The economy is improving, sure, but only on the macroeconomic level. People in the street haven't seen any improvement," Escribano said. "Every day I meet with whole families that have no income. Every single member of the family unemployed. So I think it'll be 10 to 15 years before this crisis is truly behind us."

As a young girl, Carmen survived the bombing of her south Madrid neighborhood during the Spanish Civil War. Her husband died seven years ago. And now she's survived this housing crisis, with the help of her local soccer team.

Carmen will begin house hunting soon and hopes to start over again, at age 85, in the new year.