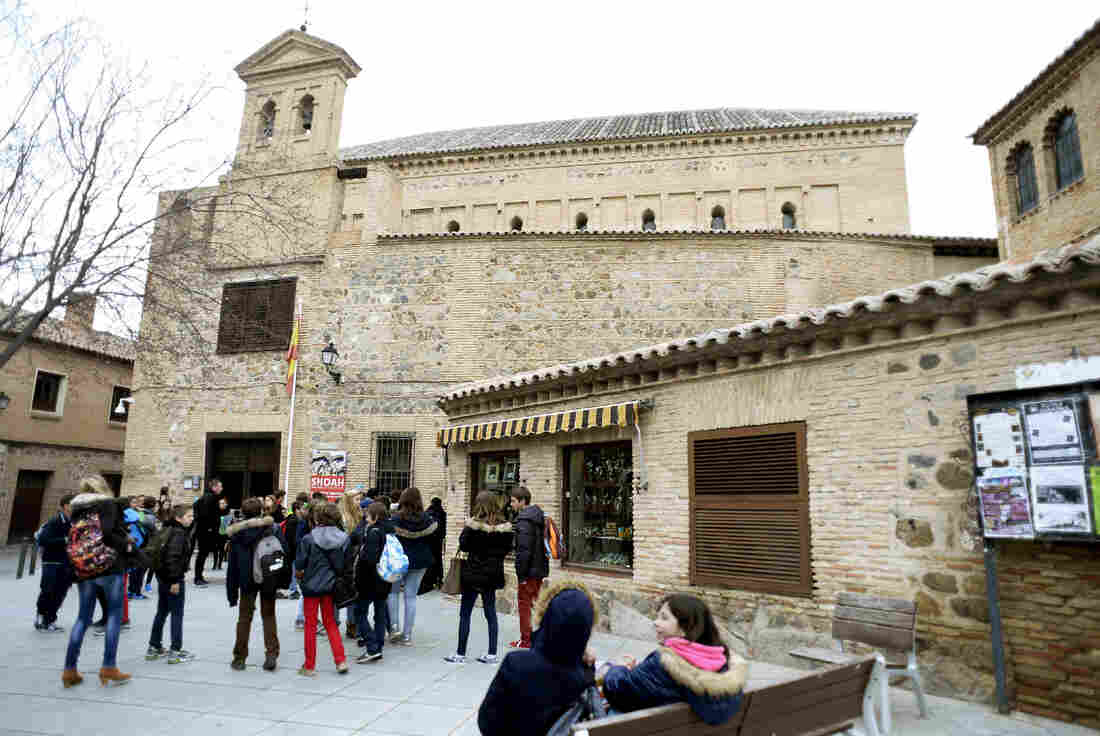 Children gather outside the El Transito synagogue and Sephardic Museum in Toledo, Spain. Founded in 1357, the synagogue was converted into a church following the expulsion of Jews from Spain in 1492. Spain is now preparing to pass a law that would allow descendants of the expelled Jews to receive Spanish citizenship. Gerard Julien/AFP/Getty Images hide caption 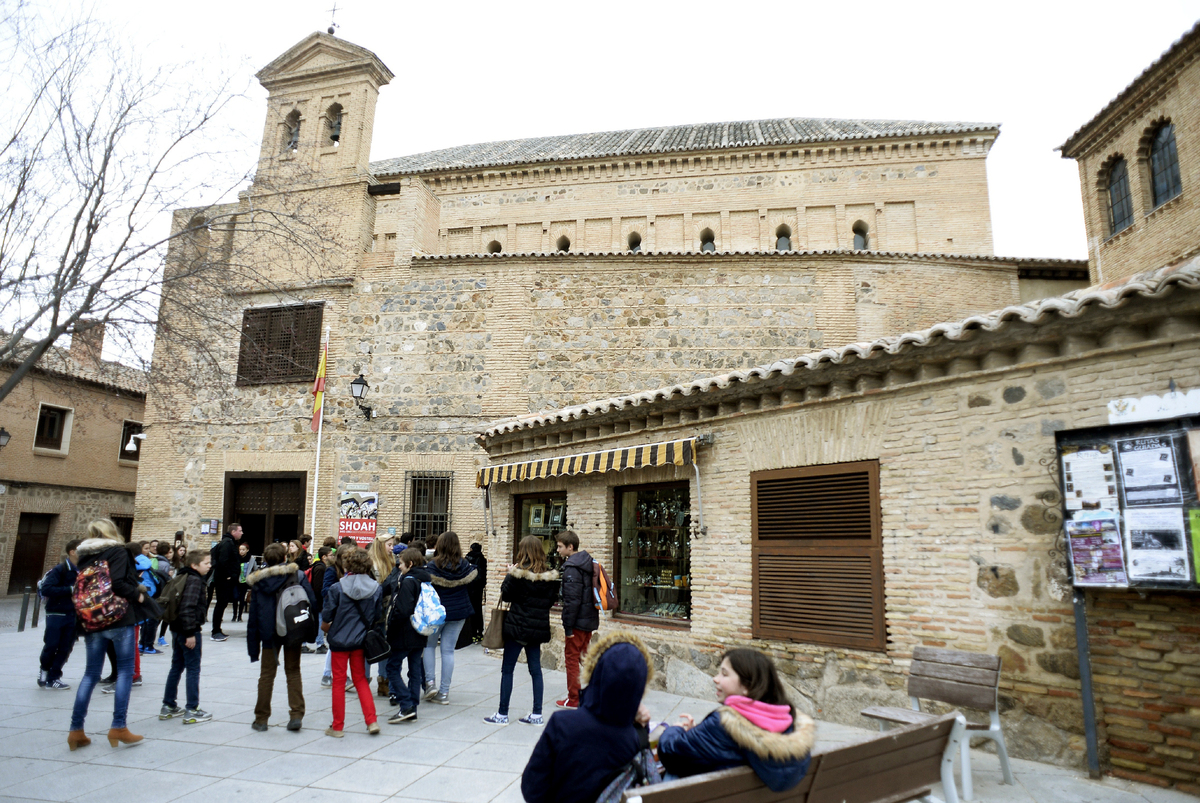 Children gather outside the El Transito synagogue and Sephardic Museum in Toledo, Spain. Founded in 1357, the synagogue was converted into a church following the expulsion of Jews from Spain in 1492. Spain is now preparing to pass a law that would allow descendants of the expelled Jews to receive Spanish citizenship.

As night fell recently over the Spanish city of Toledo, Hanukkah candles lit up empty streets outside the medieval El Transito synagogue.

Folk songs in Ladino — a blend of Spanish and Hebrew — wafted across the garden of the synagogue, which is now the Sephardic Museum.

Sefarad means Spain in Hebrew, and the term refers to Jews of Spanish descent.

But not a single employee of Toledo's Sephardic Museum is actually Jewish.

Spanish Jews today number in the low tens of thousands — a fraction of the Jewish population in France, Germany or the United Kingdom. But Toledo's cobblestone streets were once home to one of Europe's largest and most vibrant Jewish communities.

"A 13th-century poem describes Toledo's Jewish life — with eight to 10 synagogues, and a Jewish library," says historian and museum director Santiago Palomera. "Tax records show this was the most important Jewish enclave — like New York and Silicon Valley combined, in terms of contributions to medieval Spain's culture and economy." 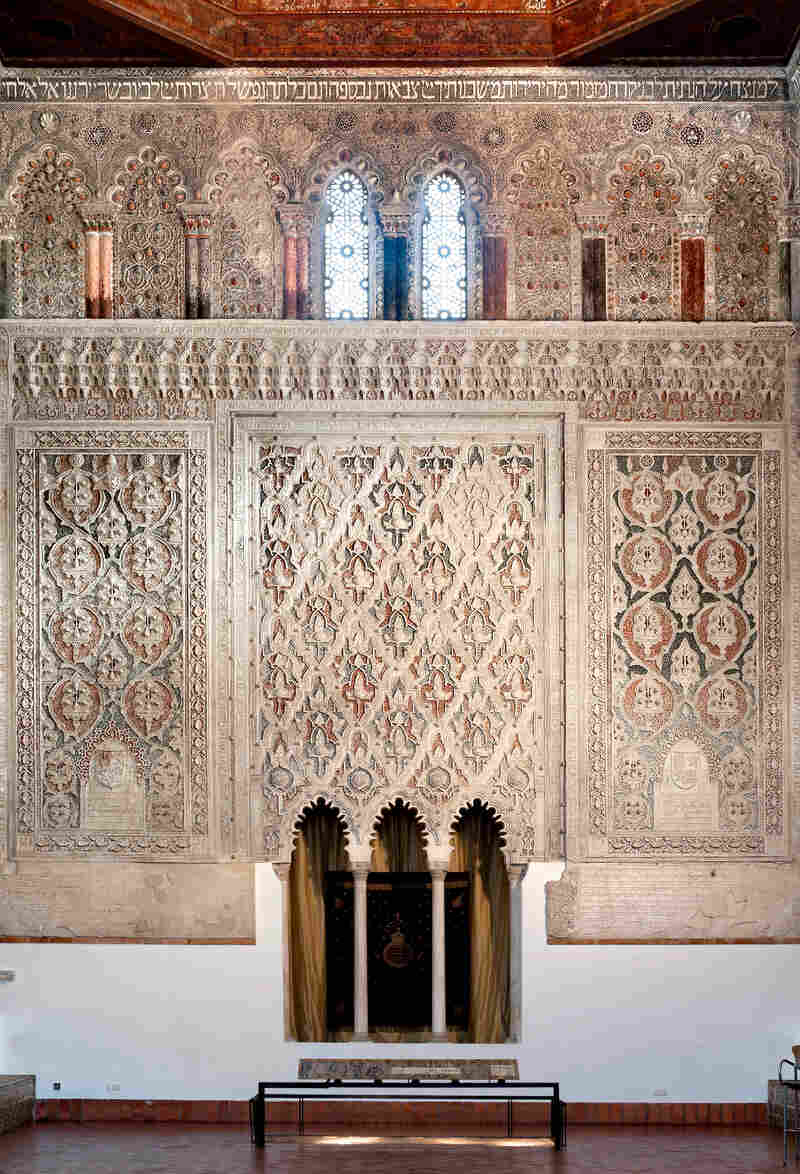 The interior of the 14th-century El Transito synagogue in Toledo, Spain. The synagogue's walls are intricately carved with Hebrew prayers, in marble and gold, and Moorish designs — representing the mix of Jewish and Arab traditions that coexisted in Spain during the Middle Ages. Here you can see the nave of the synagogue, where Torah scrolls were once kept. Courtesy of Museo Sefardí hide caption

Jews prospered in medieval Spain, under Muslim and Christian rule. But that changed in 1492, when the Catholic monarchs, King Ferdinand and Queen Isabella, expelled them.

Some 300,000 Jews — up to a quarter of the Spanish population — had to convert to Catholicism or flee Spain, or were killed in the Spanish Inquisition.

Now their descendants may become Spanish again, under a draft law approved by Spain's government. It would grant Spanish citizenship to descendants of Jews expelled in 1492. A recent amendment would let them keep their current citizenship too.

Spain says it wants to rectify what it calls a "historic mistake." The measure still needs approval by both houses of Spain's Parliament, and is expected to become law this spring.

"I think it's fair reparation on the part of the Spanish state, for the injustice that occurred in 1492," says Mauricio Toledano, secretary-general of the Federation of Jewish Communities in Spain, which is one of the groups that will help the Spanish government evaluate passport applications from Sephardic Jews around the world.

The Spanish Constitution prohibits awarding nationality based on religion. But Toledano says applicants don't necessarily need to be Jewish themselves.

"The question is, were your ancestors Spanish Jews in 1492?" he says. "If the answer is 'yes,' whether you're Jewish, Christian, Muslim or whatever today, that has nothing to do with it."

Some Muslim groups have noted this offer doesn't apply to them. Their ancestors were also expelled as Spain's Catholic kings consolidated power.

Some Jewish groups have also complained about requirements that applicants pass tests on Spanish and Sephardic culture, and travel to Spain at their own expense to apply. 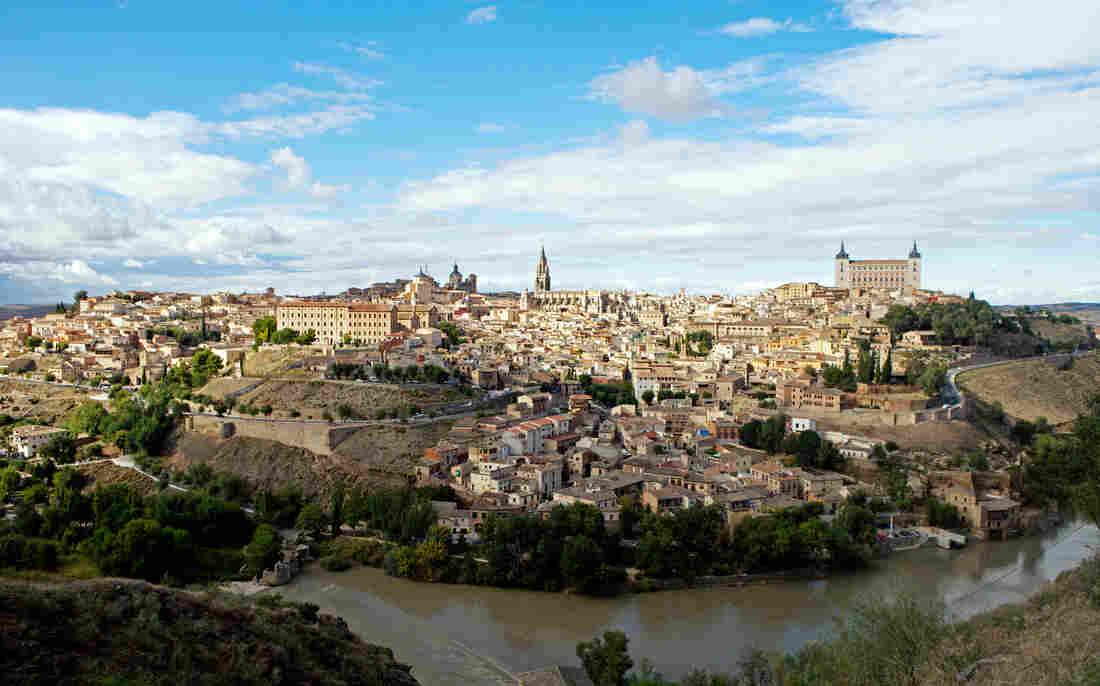 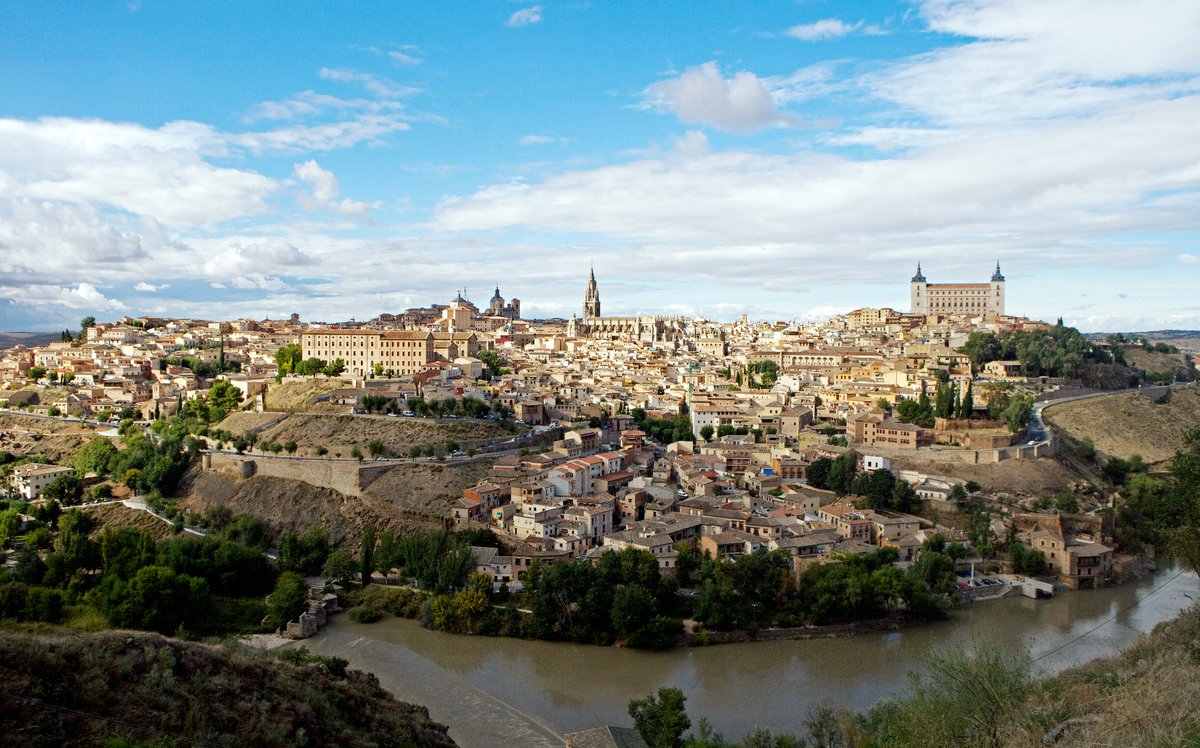 Many families don't know the religion of their ancestors more than 500 years ago. But names can be a clue. Toledano traces his Jewish ancestry back to Toledo. He estimates that some 3 million people are believed to be descendants of Spain's expelled Jews.

The Spanish government expects tens of thousands to apply for citizenship, including many from Israel — where the offer is getting lots of attention.

"When I first heard of it, I said 'Wow, that's a nice opportunity for me!' " says Ezer Karavani, a 35-year-old computer programmer who lives in Tel Aviv.

For Karavani, the unexpected chance at a European passport seemed too good to be true. Spanish citizenship would mean he could have the option to leave Tel Aviv and work anywhere in Europe. And while the Spanish government calls this "rectifiying a wrong," Karavani isn't thinking that way.

"I don't think that anybody owes me anything — definitely [not] if it happened 500 years ago," he says. 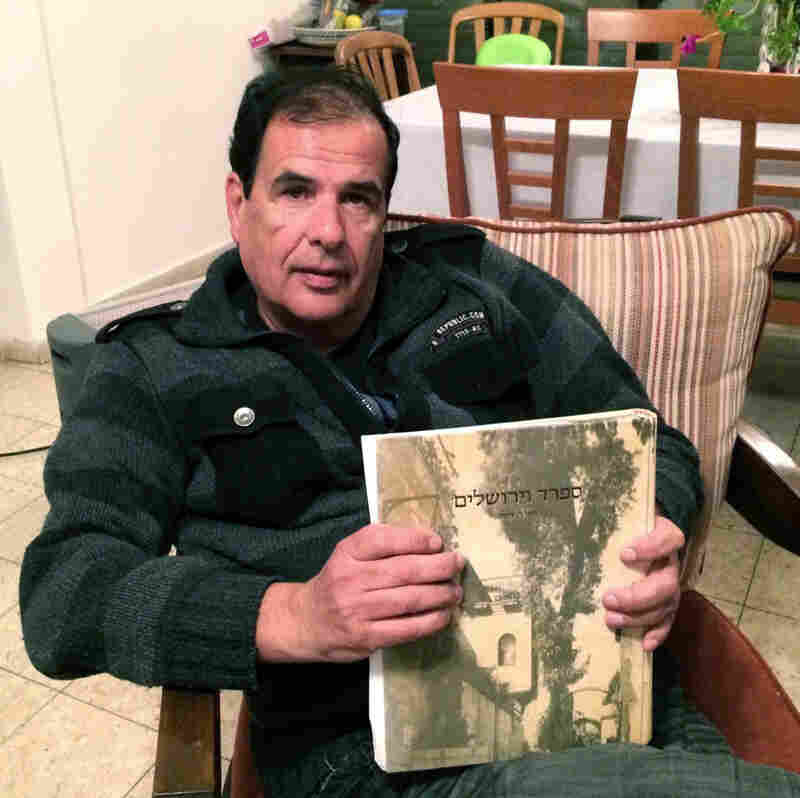 Itzhak Levy, seated in his Jerusalem apartment, holds a copy of a book on his family's history. Levy's ancestors were expelled from Spain. But he says he's not interested in the offer of Spanish citizenship because he doesn't feel that Europe today is supportive of Israel. Ellen Krosney for NPR hide caption

Spanish citizenship would also offer a potential escape from Israel's volatile security situation and high cost of living. But leaving for these reasons is a touchy subject in Israel — particularly leaving for Europe, with its history of Jewish persecution.

In Jerusalem, Karavani's 68-year-old cousin, Itzhak Levy, traces the family tree back to 15th-century Spain. But he has no interest in Spanish citizenship.

"I don't need it," he says adamantly.

Levy isn't looking for a job, or a chance to live abroad. But his disinterest goes deeper than that. Levy says he doesn't see modern Europe as supportive of Israel, and he thinks emigration will weaken the country.

But Levy is nevertheless a passionate protector of Sephardic culture.

Levy posts online videos of Ladino speakers and singers — including his mother, who has passed away.

He sings along with her recording, the words etched in his mind since childhood.

And although Levy's young relative, Ezer Karavani, is much more focused on the future than the past, he too keeps recordings of his grandmother singing in Ladino. He can't remember the lyrics but plucks along on his guitar.

He'll practice the words, he says, before he applies for Spanish citizenship.