Accessibility links
Lacking Internet, Cubans Rely On 'The Package' For Entertainment : Parallels The so-called weekly "package" allows Cubans to watch every current TV show and series available to the world at a fraction of the cost and without government censors. 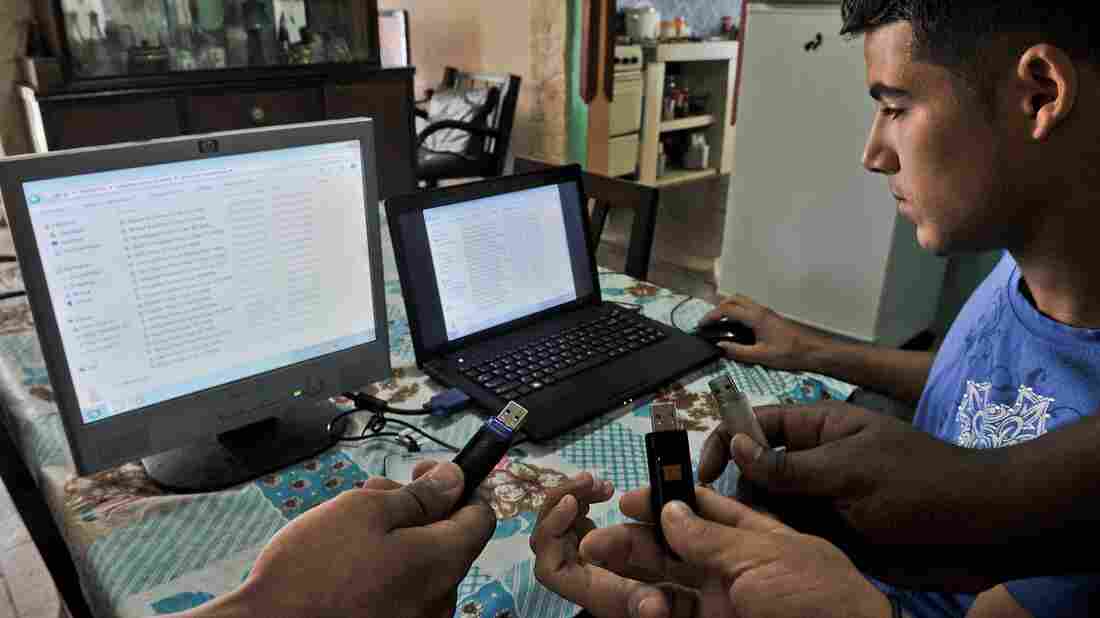 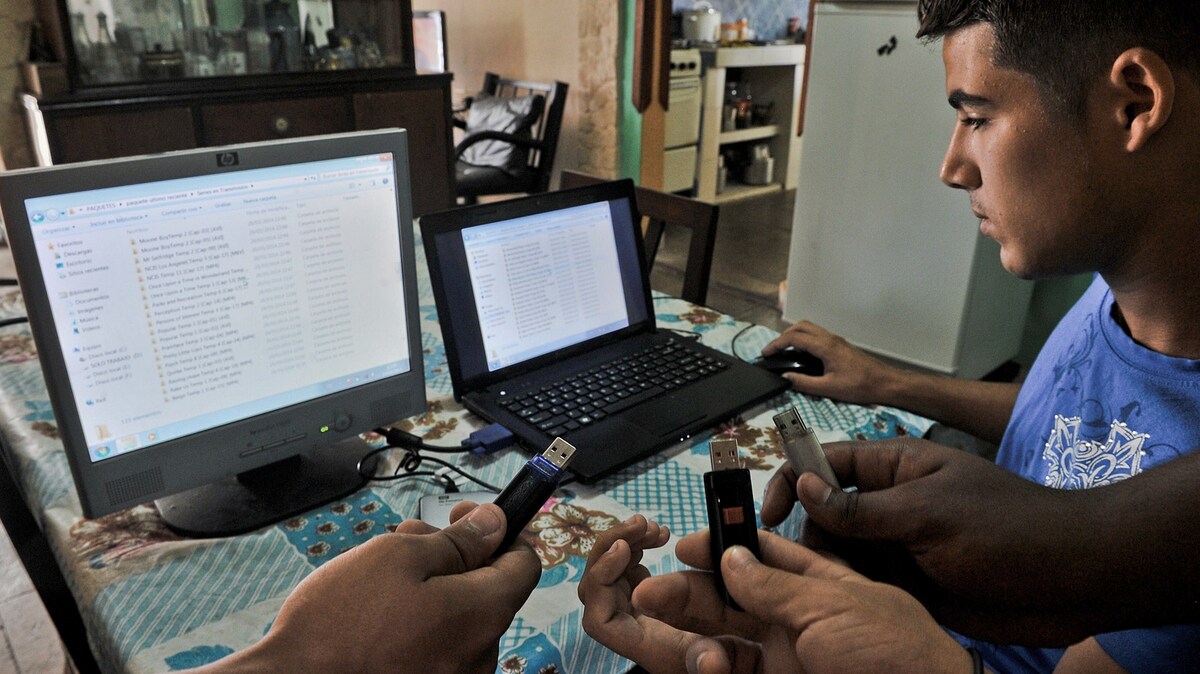 Young Cubans prepare their sticks to charge the latest internet "package" with films, television series, software and other similar stuff from foreign origin downloaded from the web.

Cuba has promised its citizens better Internet access in this New Year. The few Cubans who now manage to get online find it expensive and slow.

Warming ties with the U.S. have stirred hope for improved telecommunications. But until then, many residents have devised an ingenious work-around, or should we say walk-around.

On Havana's Malecon, roaming guitarists play for the crowds resting against the iconic sea wall. In this nightly gathering spot, it's old fashioned interacting. No one is on a cell, no eyes glued to smart phones.

While Cubans tout their revolution's free health care and education, they've missed out on the digital one. Less than a fifth of the population owns a mobile device; internet access is even lower and cable and satellite TV is banned in private homes.

But surprisingly, Cubans are plugged in. During a lull in the nightly music the conversation turns to this week's latest installment of some of the U.S.'s most popular television shows.

Julio Rodriguez and his wife Kadiuska Lara rattle off their favorites: Person of Interest, The Mentalist and Hawaii 5-0. Another couple shouts they love Caso Cerado, the Telemundo courtroom drama, and the Discovery Channel.

Without hi-tech offerings, Cubans have found an ingenious way to get nearly real-time entertainment, as well as the latest magazines, apps and even video games. It's called the "Weekly Package," and it's passed, bought and sold hand-to-hand on external hard drives and memory sticks throughout the island.

Rodriguez says 80 percent of the country watches "the Package," that's his unscientific opinion. But it couldn't be simpler; all you need is a DVD player, which is legal on the island.

In the living room of his small apartment outside Havana, Iyawo sits in front of a computer screen. He won't say his full name since what he is doing is illegal in Cuba. On Saturdays, he goes to his distributor, who has downloaded the entire package — about one terabyte of data — from a satellite.

By the time Iyawo is back to his house there's already a line outside. That day he charges about $5.75 for the whole thing, by Monday the price drops in half. Smaller memory sticks full of pre-selected shows are cheaper.

The U.S. And Cuba: A Brief History Of A Complicated Relationship

On a recent day, the latest "package" of offerings included everything from the latest episode of Showtime's Homeland, Univision's Sabado Gigante and even anti-virus software updates. There were also advertisements for Havana restaurants and a local kid's party decorator. Looks like capitalism to me.

"Capitalism with the face of socialism," snaps back Iyawo. "Because what I'm doing is making things better, not worse. I'm providing a service."

And Iyawo he insists it is pure entertainment. The package does not include anything political or pornographic. That's why he speculates that the government permits it.

And the government says it will permit more access to the Internet in 2015. In a state newspaper last week, officials announced improved services, including Internet access in mobile devices, although no timetable was given. For now, Cubans continue to line up and pay up.

On a busy street in Old Havana, in front of the state-owned telecommunications company, Danier Lopez waits in a long line to get inside on one of a dozen computers.

The connection is expensive, Lopez says, about $5 an hour — about a quarter of a monthly minimum salary. And it's slow. Lopez says he spends most of his time waiting for pages to load. Cuban censors also routinely block some websites. Lopez says he has a Facebook page but hardly ever sees it.

Reinaldo Escobar, an independent journalist for the prominent website 14ymedio.com, eagerly awaits better service too. Sympathetic western embassies allow him to use the Internet free, but he pays a political price for the service. The government publishes photos of him entering the embassies using them to argue his work is subversive. He says change is coming.

"The changes are moving in the right direction," Escobar says. "Unfortunately, they are not moving at the speed or the depth we need."

Just last week, Escobar and several other activists were detained by state security forces just hours before they planned to attend a free speech protest.