Accessibility links
From Threats Against Salman Rushdie To Attacks On 'Charlie Hebdo' : Parallels When Iran's leader called for the killing of the British writer in 1989, it shocked the West. Now, such threats from Islamic radicals are becoming common and actual attacks are becoming more frequent. 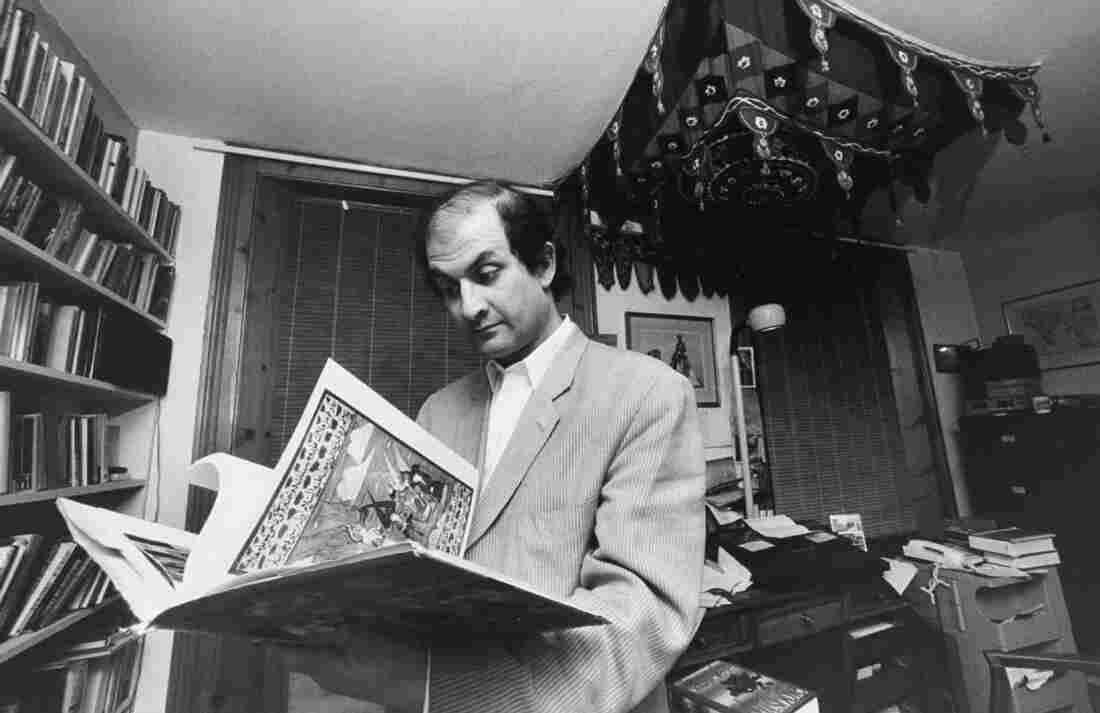 British writer Salman Rushdie leafs through a book in his study. He went into hiding for years after the Iranian leader Ayatollah Khomeini issued a fatwa calling for his death in 1989. The ayatollah denounced Rushdie's portrayal of the Prophet Muhammad in the novel The Satanic Verses. Terry Smith/The LIFE Images Collection/Getty hide caption 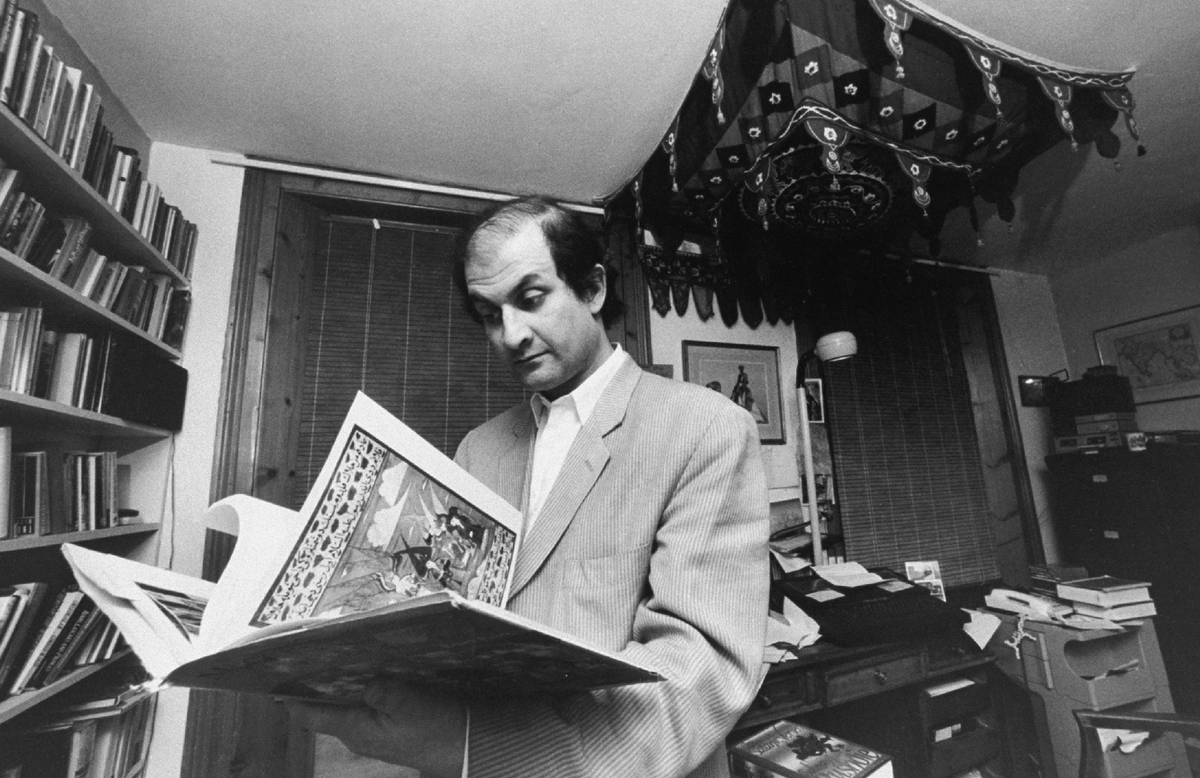 British writer Salman Rushdie leafs through a book in his study. He went into hiding for years after the Iranian leader Ayatollah Khomeini issued a fatwa calling for his death in 1989. The ayatollah denounced Rushdie's portrayal of the Prophet Muhammad in the novel The Satanic Verses.

When Iran's supreme leader Ayatollah Khomeini issued a 1989 fatwa calling for the killing of British writer Salman Rushdie, many in the West could scarcely believe a literary novel would prompt an international death threat.

We've come a long way since then.

Radical Islamists now issue threats against cartoonists, writers and filmmakers with such frequency that they barely cause a stir. Actual attacks have been carried out several times over the past decade, and French authorities suspect Muslim extremists in Wednesday's slaughter of 12 people in Paris, including eight journalists at the satirical magazine Charlie Hebdo.

To see how these threats and attacks have evolved over the past quarter-century, consider al-Qaida's most-wanted list, published in 2013 in its online magazine, Inspire.

A couple of things stand out in the article titled "Wanted: Dead or Alive for Crimes Against Islam." First, it attracted little attention because it's the kind of thing the group does regularly. Second, the group did not target Western political or military leaders — the people who have actually waged war against the group.

The Latest On Paris Attack: Several Detained, But Manhunt Continues

A Magazine Staff Is Slaughtered, A French Nightmare Is Realized

It didn't even mention the U.S. Navy's SEAL Team 6, which two years earlier had carried out the raid that killed al-Qaida leader Osama bin Laden.

Rather, the 10-person list was devoted to those who had committed a greater crime in the eyes of al-Qaida: They had insulted Islam and the Prophet Muhammad. On the list were several cartoonists, along with a writer, a filmmaker and a fundamentalist U.S. preacher with a minuscule following.

Among those named was Charlie Hebdo editor Stephane Charbonnier, who was killed Wednesday. Another was Rushdie, who has earned a lifetime achievement award among Muslim radicals for The Satanic Verses, his novel that re-imagines parts of the prophet's life.

French authorities have named three suspects in Wednesday's attack, but no individuals or groups have claimed responsibility and officials have not cited al-Qaida or any other Muslim extremist groups.

Still, the larger pattern is clear. Assisted by the Internet, radical Muslims often focus intensely on obscure artists whose work receives limited attention in the West but can provoke spasms of outrage and even violence in Muslim communities across the globe.

Here's a look at some of the most prominent cases:

The Ayatollah Calls For A Writer's Death: Rushdie, who was born a Muslim but left the faith, was already a prominent writer when he published The Satanic Verses in 1988. Many Muslims objected to what they saw as an irreverent depiction of the prophet, touching off controversy in a number of Muslim countries. The book was burned in some places and ultimately banned in about a dozen countries.

But what made the case unique was Ayatollah Khomeini's fatwa, broadcast on Radio Tehran on Feb. 14, 1989, and followed by a bounty for the death of Rushdie. The author went into hiding for years, rarely appearing in public.

It took nine years — and the death of Khomeini — before Iran backtracked a smidge, saying in 1998 that it would "neither support nor hinder assassination operations on Rushdie."

Rushdie says he now considers the threat more rhetoric than real. He remains an advocate of artistic freedom, and released a statement in the wake of the Paris shooting:

"I stand with Charlie Hebdo, as we all must, to defend the art of satire, which has always been a force for liberty and against tyranny, dishonesty and stupidity. 'Respect for religion' has become a code phrase meaning 'fear of religion.' Religions, like all other ideas, deserve criticism, satire, and, yes, our fearless disrespect." 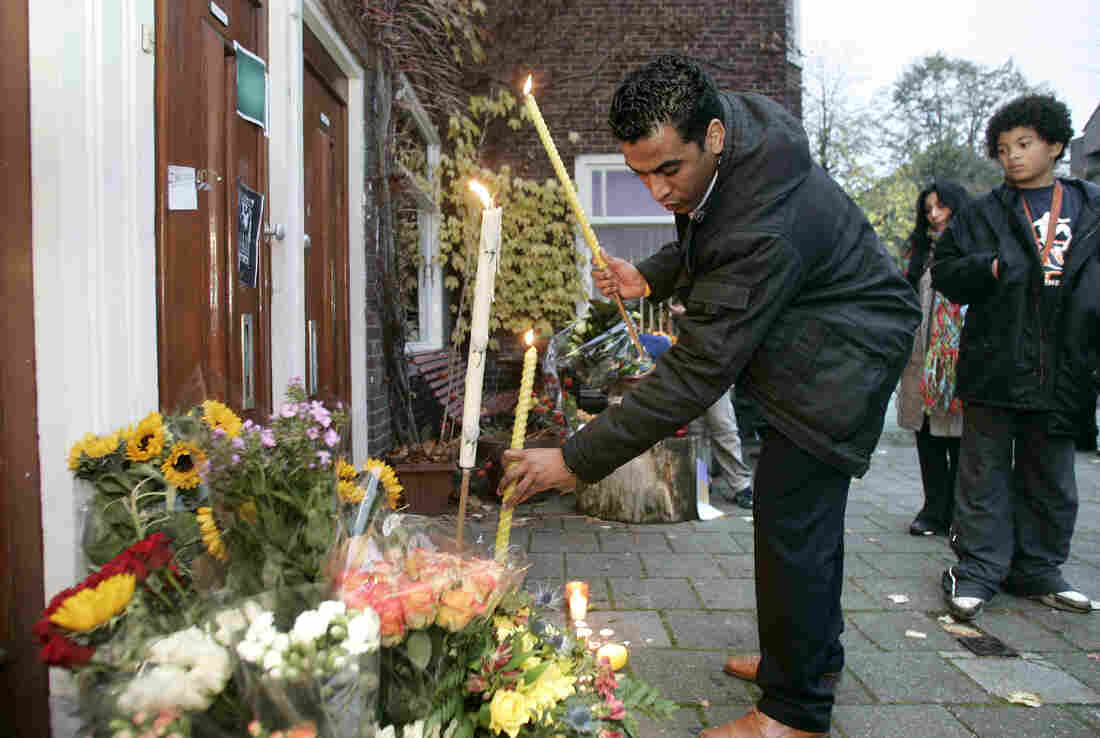 A man places flowers at the home of slain Dutch filmmaker Theo van Gogh in 2004. Van Gogh was killed by a Muslim radical after he made a film criticizing the treatment of women in Islam. Michel Porro/Getty Images hide caption

A Dutch Artist Is Gunned Down: Theo van Gogh made a 10-minute film in 2004 titled Submission, which criticized the treatment of women in Islam, provoking an outcry among many Muslims.

The film shows text from the Quran, the Muslim holy book, on the naked bodies of women. Van Gogh made the film with Ayaan Hirsi Ali, a Somali-born American who often writes and speaks out on the treatment of Muslim women.

About three months after the film was broadcast on Dutch television, van Gogh was cycling to work in Amsterdam when he was shot dead by a Dutch-Moroccan with ties to an Islamist group.

In a country that prides itself on its tolerance, the case remains a sensitive subject that some prominent cultural figures are still reluctant to discuss publicly, The New York Times wrote recently in a report on the 10th anniversary of van Gogh's killing.

Danish Cartoons Spark Deadly Protests: The largest Danish newspaper, Jyllands-Posten, published a dozen cartoons in 2005 about Islam, most of them depicting Muhammad. The intent was to foster debate about criticism of Islam — and that's precisely what happened on a global scale.

Protests by Muslim groups in Denmark soon spread to many Muslim countries. Danish companies faced boycotts. An estimated 200 people were killed in violence over the next several months.

The newspaper eventually published an open letter apologizing for any offense but defending its right to publish the cartoon. Charlie Hebdo republished the cartoons in 2006. 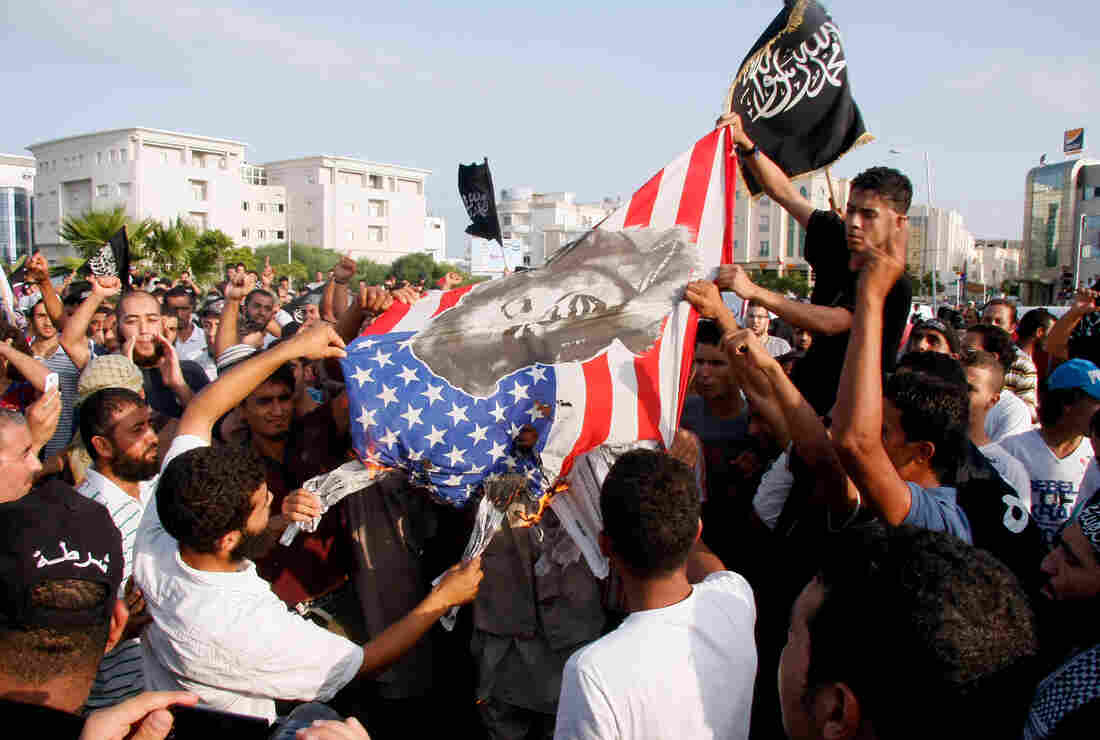 Tunisian protesters burn a U.S. flag bearing a portrait of actress Marilyn Monroe during a demonstration against the film Innocence of Muslims outside the U.S. Embassy in Tunis in September 2012. The anti-Islam film sparked protests at many U.S. embassies in the Muslim world. Khalil/AFP/Getty hide caption 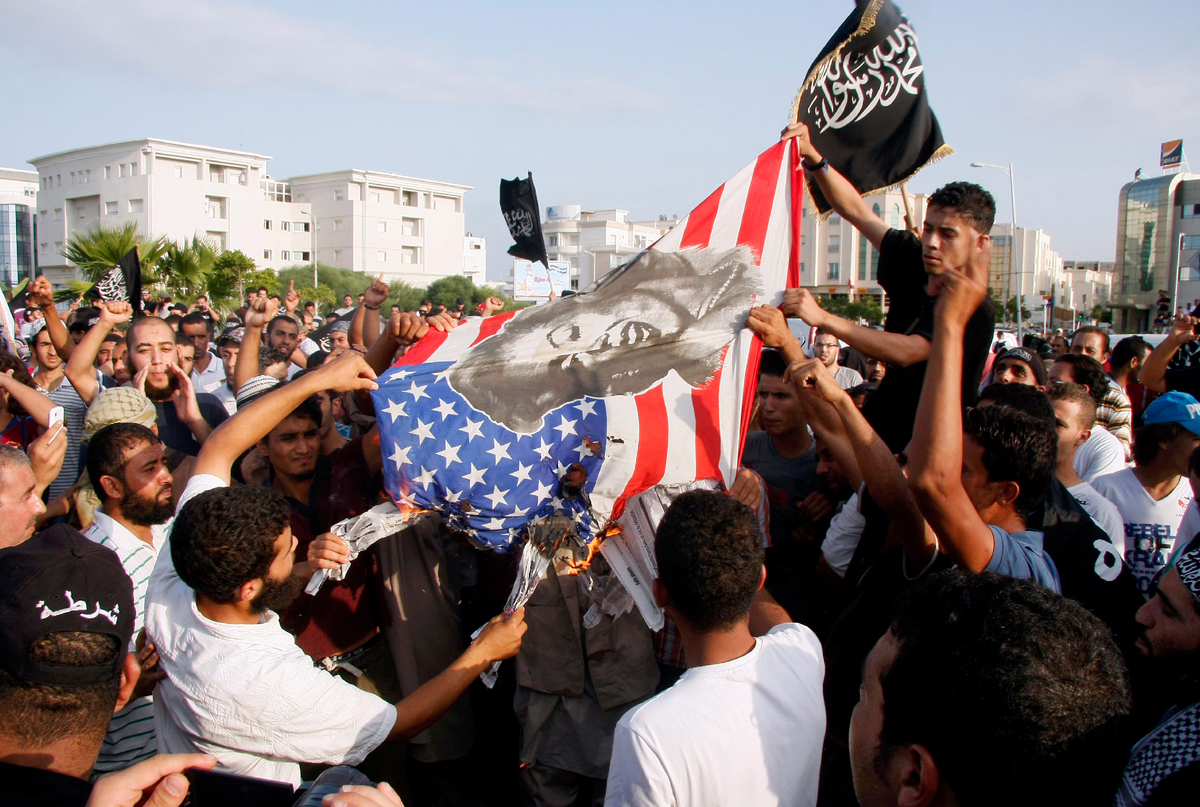 Tunisian protesters burn a U.S. flag bearing a portrait of actress Marilyn Monroe during a demonstration against the film Innocence of Muslims outside the U.S. Embassy in Tunis in September 2012. The anti-Islam film sparked protests at many U.S. embassies in the Muslim world.

An American Film Prompts Embassy Demonstrations: An amateurish anti-Islam film, the Innocence of Muslims, was posted on YouTube in July 2012 and was widely ignored.

The film was made by Nakoula Basseley Nakoula, an American of Egyptian descent, and portrays Muhammad as bloodthirsty and with a voracious sexual appetite. Two months later, it had attracted enough attention in Muslim countries to provoke unruly demonstrations outside many U.S. embassies.

But the film's lasting notoriety came from the role it didn't play in an attack at a U.S. diplomatic post in Benghazi, Libya, where four Americans were killed on Sept. 11, 2012. The Obama administration initially cited the film as the cause of the deadly assault. But amid bitter partisan wrangling in the U.S., the administration later acknowledged that wasn't the case.

Nakoula, meanwhile, received death threats for making the film. He was arrested in California for violating the terms of his probation on an earlier bank-fraud conviction and served less than a year in prison before his release in 2013.