Accessibility links
In A Paris Suburb, Jews And Muslims Live In A Fragile Harmony : Parallels Jewish and Muslim communities have lived together for decades in Sarcelles, about 10 miles from Paris. But locals say last week's attacks in Paris have heightened awareness of religious differences. 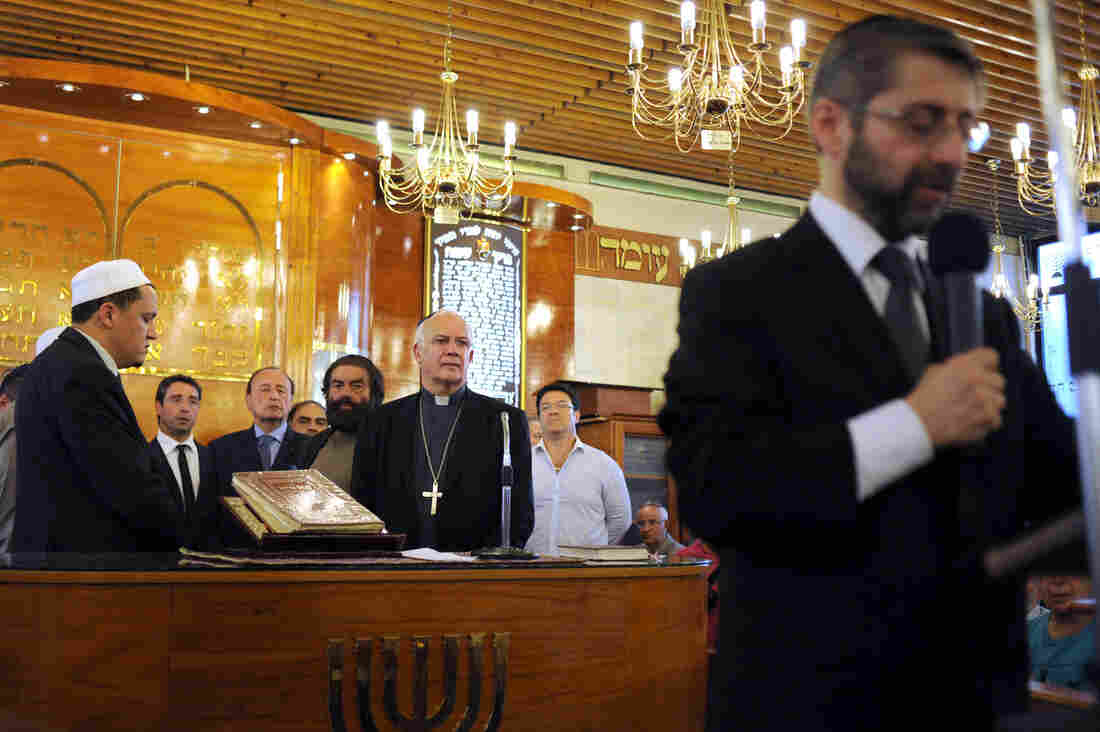 Great Rabbi of France Haim Korsia, right, speaks as the Imam of the eastern suburb of Drancy, Hassen Chalghoumi, left, and others listen during a ceremony at the synagogue of Sarcelles, France, in July 2014, after pro-Palestinian protests in Paris and Sarcelles. Stephane de Sakutin/AFP/Getty Images hide caption 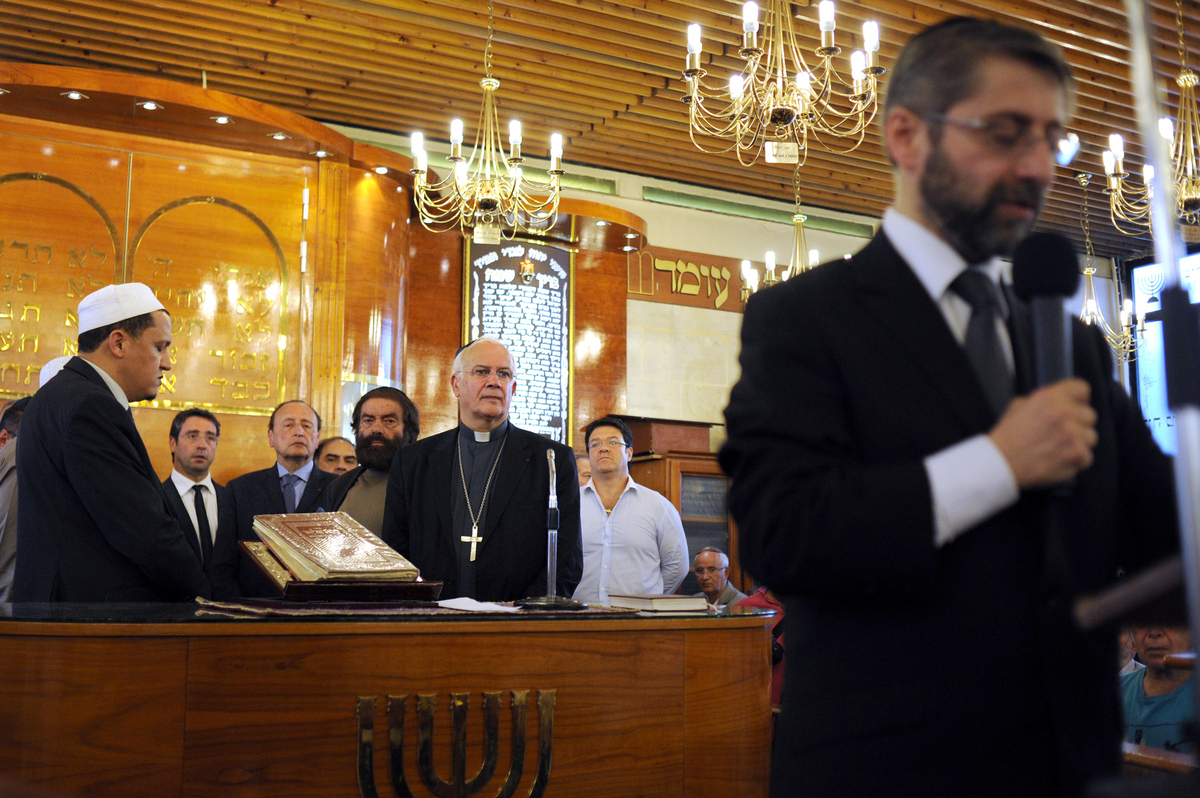 Great Rabbi of France Haim Korsia, right, speaks as the Imam of the eastern suburb of Drancy, Hassen Chalghoumi, left, and others listen during a ceremony at the synagogue of Sarcelles, France, in July 2014, after pro-Palestinian protests in Paris and Sarcelles.

In Sarcelles, 10 miles from Paris, Jewish and Muslim communities have lived together for decades, more or less in harmony. Both communities are composed mostly of French citizens from North Africa, and their descendants.

But in the wake of last week's terror attacks, there are no "Je suis Charlie" signs in Sarcelles.

Such signs are otherwise ubiquitous across France, amid an outpouring of support for victims of last week's terror siege. Twelve people were killed at the offices of the French satirical magazine Charlie Hebdo. Four others were killed at a kosher supermarket two days later. A policewoman was killed in a separate attack.

"People [here] think, we are not Charlie. Me, I am not Charlie!" says Sarcelles resident Abdel Nour, whose family straddles Sarcelles' sectarian divide. "I'm Muslim, and my wife is a Jew — a Jew from Israel."

Nour says both he and his wife are sad about the attacks in Paris. But he says in Sarcelles, where it seems that nearly everyone is religious — Muslim or Jew — public support for Charlie Hebdo is risky.

"It's sensitive. It's not the same in Paris, as here. In Paris, people live well. Here, there's too much unemployment," Nour says. "They're looking for a life."

Many Sarcellois are worried about offending their Muslim neighbors, Nour says, if they publicly display posters reading "Je suis Charlie," or "I am Charlie," in solidarity with the magazine. Its newest cover features a caricature of the Prophet Muhammad, of whom Islam forbids depictions.

"They're sad about Charlie, but they're looking [out for themselves] first and Charlie after," Nour says.

A white van filled with French police is parked in front of Sarcelles' main synagogue. A French soldier with an automatic weapon paces back and forth in front of the synagogue's main gate.

"It's quiet and peaceful," says Noa Fitoussi, enjoying coffee across the street from the synagogue, while her husband prays inside. "But I'm not sure, if the police weren't there, it would be the same."

Fitoussi worries Sarcelles' peace is fragile. Last summer, young Muslims on the fringes of a pro-Palestinian march tried to attack a synagogue in Sarcelles, and managed to set fire to a Jewish shop. 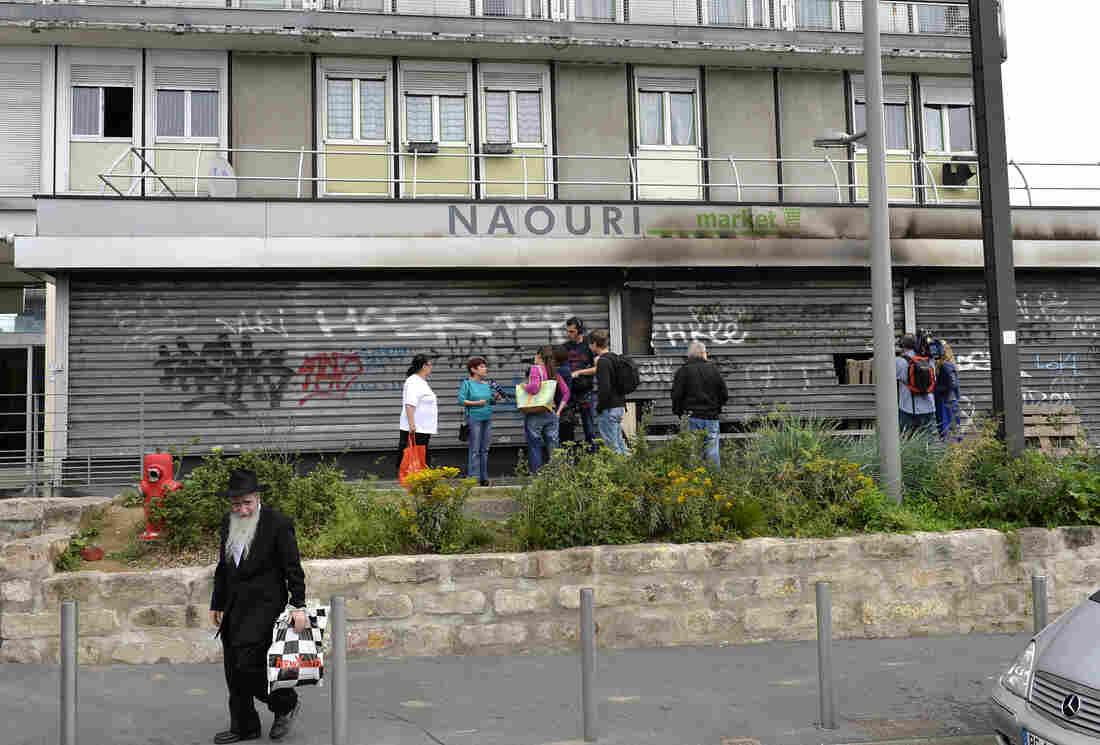 People stand in front of a shopping center in Sarcelles' Les Flanades neighborhood, where shop windows were damaged after a rally against Israel's Gaza offensive descended into violence in July 2014. Miguel Medina/AFP/Getty Images hide caption

Some Jews here say such strife reinforces their Jewish identity.

Most of Sarcelles' Jews are Sephardic — of Spanish descent — and ended up in North Africa when Spain expelled its Jewish population in the Middle Ages. Many came to mainland France after living in French Algeria and the French colony of Tunisia for generations. Many members of the town's Muslim population are from those same countries, and share the same cultural and linguistic history.

Unlike them, Maria Ribeiro is a Portuguese Jew who immigrated to France more recently.

"Muslim radicals are trying to provoke us Jews," Riberio says, in Portuguese. "But we won't budge. We want to live in harmony with Muslims in Sarcelles. Our neighbors are not the people who did this."

In a halal chicken shop near a kosher cafe, Muslim men sip sweet tea and speak a mix of French and Arabic.

"We're all one here in Sarcelles — not Muslim, Catholic or Jew," says one man, Abu Hussein Shukri, speaking Arabic. He's originally from Egypt.

One of Shukri's friends, Ali Kayta, from the Ivory Coast, hangs back listening, but then confides.

"It's complicated — difficult. Relations are difficult," Kayta says, switching into French. He says the truth is, doubt and fear have crept in.

Over the course of a day spent in Sarcelles, everyone NPR met was either an Orhodox Jew or an observant Muslim. They spoke of harmony, over coffee. But it was difficult to find any Jews and Muslims actually sharing their coffee together.