Accessibility links
The French Debate: Free Speech Versus Hate Speech : Parallels Since the attack on a French satirical magazine, dozens have been arrested for condoning terrorism and inciting hatred. Many are wondering if the crackdown on hate speech is compromising free speech. 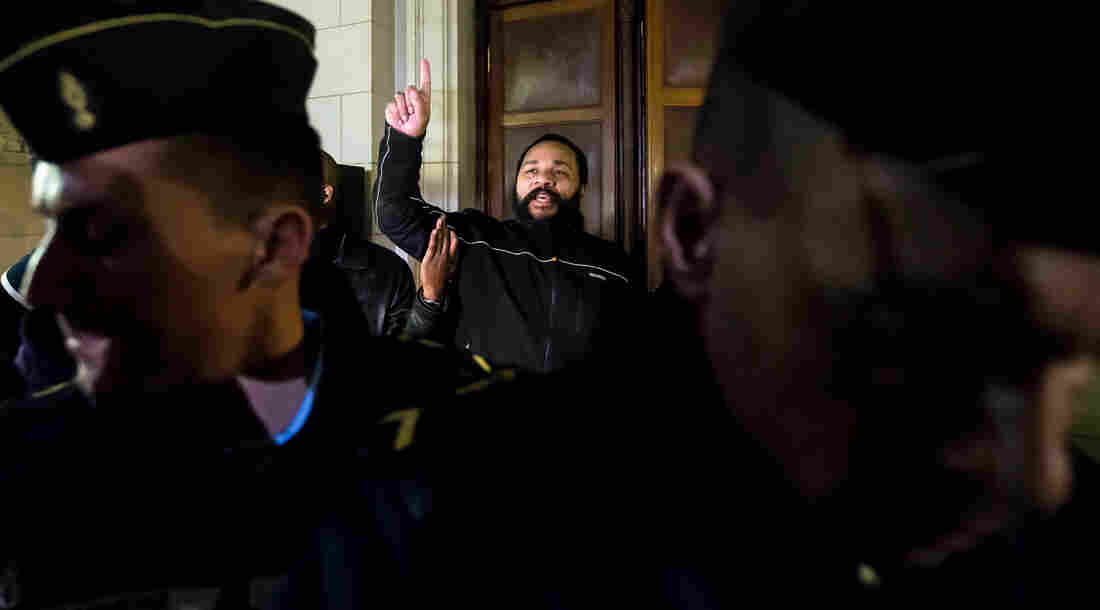 French comedian Dieudonne M'Bala M'Bala, center, gestures as he exits the courtroom after his trial in Paris last Wednesday. He was ordered to pay $37,000 for condoning terrorism. His lawyer argues he was denied the same freedom of expression that the satirical magazine Charlie Hedbo received. Ian Langsdon/EPA/Landov hide caption 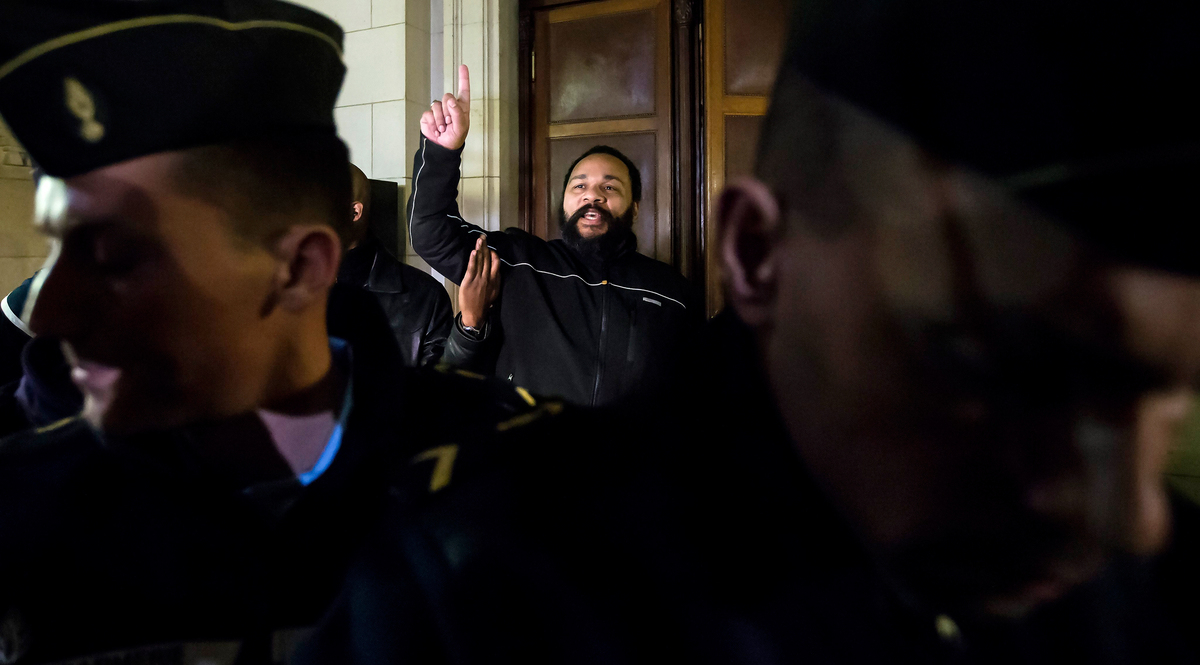 French comedian Dieudonne M'Bala M'Bala, center, gestures as he exits the courtroom after his trial in Paris last Wednesday. He was ordered to pay $37,000 for condoning terrorism. His lawyer argues he was denied the same freedom of expression that the satirical magazine Charlie Hedbo received.

When terrorists attacked a satirical magazine in Paris last month, killing eight journalists, millions took to the streets in support of free speech. They waved pencils and carried signs in solidarity with the magazine Charlie Hebdo.

But in the weeks since those attacks, scores have also been arrested for condoning terrorism and inciting racial and religious hatred. Many now wonder if the government's crackdown on hate speech is compromising free speech.

One of those arrested in the wake of the attacks was controversial stand-up comedian Dieudonne M'Bala M'bala. Last Wednesday, a judge ordered him to pay the equivalent of a $37,000 fine for condoning terrorism.

The comic has faced prosecution many times in the past for his crude, anti-Semitic jokes. This time it was for posting "I feel like Charlie Coulibaly" on his Facebook page. The judge said Dieudonne's remark was clear support for Amedy Coulibaly, the gunman who killed a police officer and four people in a kosher grocery store.

"Dieudonne is constantly hounded and harassed, which is why he said he feels like a terrorist," says Verdier.

In France, as in the United States, people are free to express their opinions. But in France that freedom of speech ends at insulting others based on their race, religion or sex.

"Hate speech laws were inspired by the horrors of the Second World War, and in particular the Nazi Holocaust against the Jews," says Christopher Mesnooh, an American attorney who practices law in France.

Jean-Yves Camus is a specialist on extremist organizations. He says French hate speech laws have evolved over time. They were first enacted in 1939 to fight the enormous amount of anti-Semitic propaganda in the popular press. 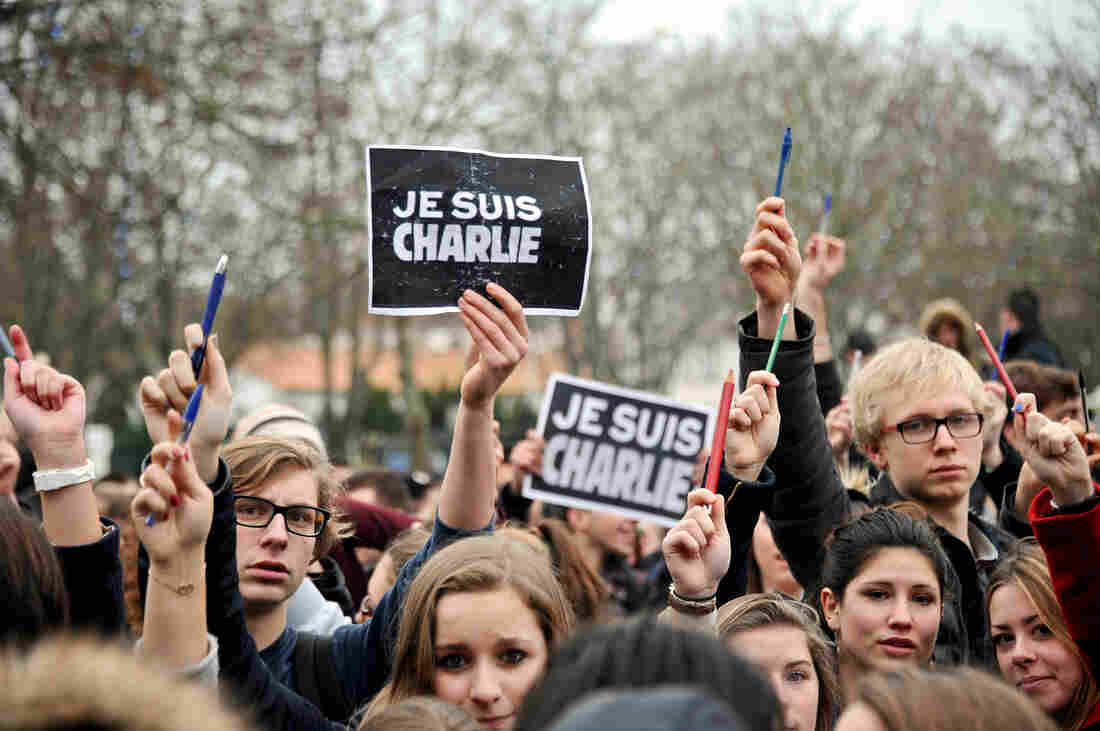 Students hold pens and signs reading "I am Charlie" in La Rochelle, France, on Jan. 8. They were paying tribute to the 12 people killed the day before in an attack on Charlie Hebdo in Paris. Xavier Leoty/AFP/Getty hide caption 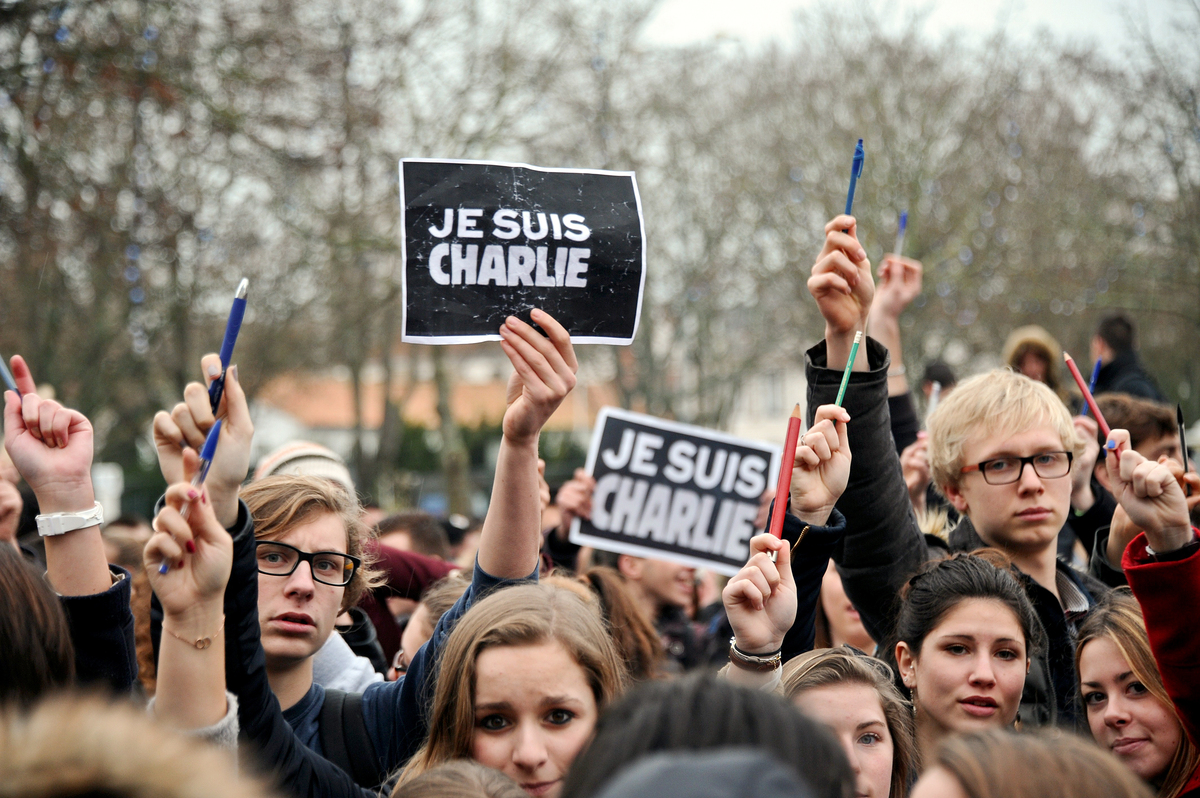 Students hold pens and signs reading "I am Charlie" in La Rochelle, France, on Jan. 8. They were paying tribute to the 12 people killed the day before in an attack on Charlie Hebdo in Paris.

In the 1970s they were strengthened to protect Muslims. And in the late 1980s the French parliament passed a law making it a crime to deny the Holocaust. This was in response to the realization among the French public of the extent of the crimes committed by the Vichy collaborationist government.

"And then, after 9/11, we saw a huge growth of Islamist fundamentalism, which was very active on the Internet," says Camus. "So lawmakers and anti-racism groups again strengthened hate speech laws to take this into account."

But for France's nearly 6 million Muslims, Charlie Hebdo being allowed to insult Islam while others are jailed for racist remarks seems hypocritical.

Myriam Doudech, 36, says she condemns the attack on the journalists who drew caricatures of the prophet Mohammed. But as a Muslim, she sees a double standard when it comes to free speech.

"You know, in France you cannot attack some religions, but they laugh about Islam," she says. "We all need respect. But the rules have to be the same for everybody."

What World Leaders Say, And What They Do

Camus says some people are confusing hate speech with blasphemy, which was abolished as a crime after the French Revolution.

"You really can make fun in France of any religion. And this is what the Muslim community has to understand," says Camus. "We have this tradition and we will stand by it."

People who would have been fined for hate speech before the attacks are now facing jail terms. One defense lawyer denounced what he called a collective hysteria gripping the nation.

But Camus says Muslims have also been protected by hate speech laws. He says people must understand the difference between attacking a belief and attacking individuals.

"You can say, for example, that you stand against Islam, but you cannot say anything negative about Muslims as a group," he says.

Camus says the French won't tolerate a U.S.-style Patriot Act that gives the government surveillance powers over the private lives of citizens. But the French will accept stricter limits on freedom of speech to stop the spread of terrorist ideology, he says.