Accessibility links
Saudi Girls Can Now Take Gym Class, But Not Everyone Is Happy : Parallels Saudi Arabia has agreed to introduce physical education for girls in its gender-segregated public schools. But there's opposition from hard-liners. 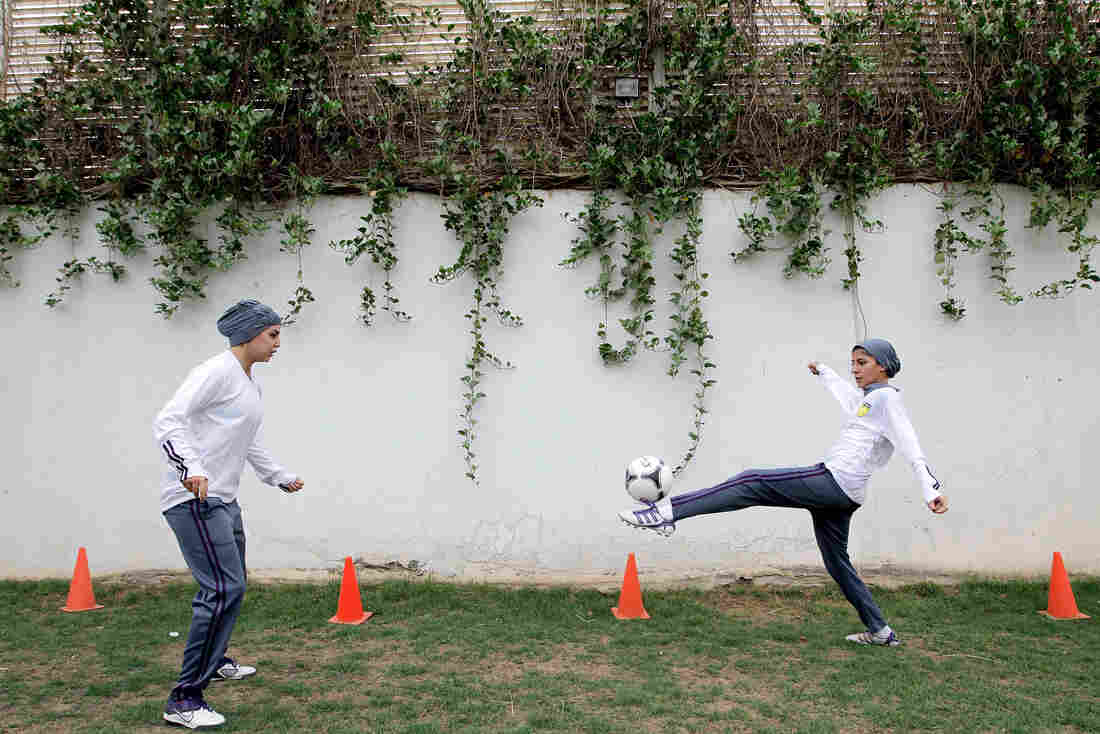 Members of a Saudi women's soccer team, Rana Al Khateeb (left) and captain Rawh Abdullah, practice at a secret location in the capital Riyadh in 2012. Saudi women have had only rare opportunities to play sports. The country sent women to the Olympics for the first time in 2012 and now girls will be allowed to take physical education classes at public schools. Hassan Ammar/AP hide caption 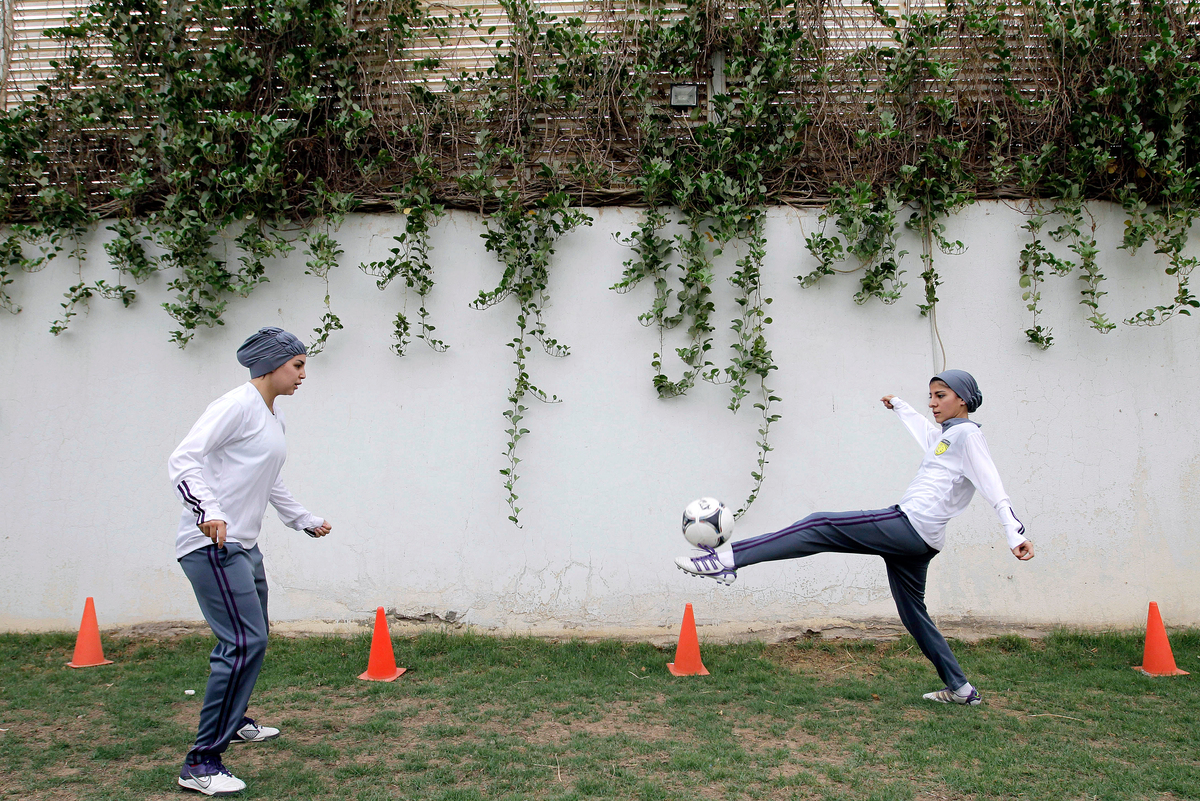 Members of a Saudi women's soccer team, Rana Al Khateeb (left) and captain Rawh Abdullah, practice at a secret location in the capital Riyadh in 2012. Saudi women have had only rare opportunities to play sports. The country sent women to the Olympics for the first time in 2012 and now girls will be allowed to take physical education classes at public schools.

When it comes to females and sports, Saudi Arabia is starting to change.

Saudi Arabia sent its first female competitors to the Olympics in 2012, after years of sending only men. The public schools, like many institutions, are segregated by gender, and only boys have been allowed to play sports. But girls will now be allowed to take part in their own sports and exercise programs, a move that is opposed by some hard-liners.

"Yeah, yeah, yeah. It's a new thing — and I really like it. I wish I was in school so I can have that," says Jowhara al-Theyeb.

Theyeb is 23 and just out of college, but she already has an important job. She's a recruitment manager for Gloworks, a private company that recruits women, matching their resumes with job openings in companies across the country. Every time her team places a woman in a job, there's an office ceremony. 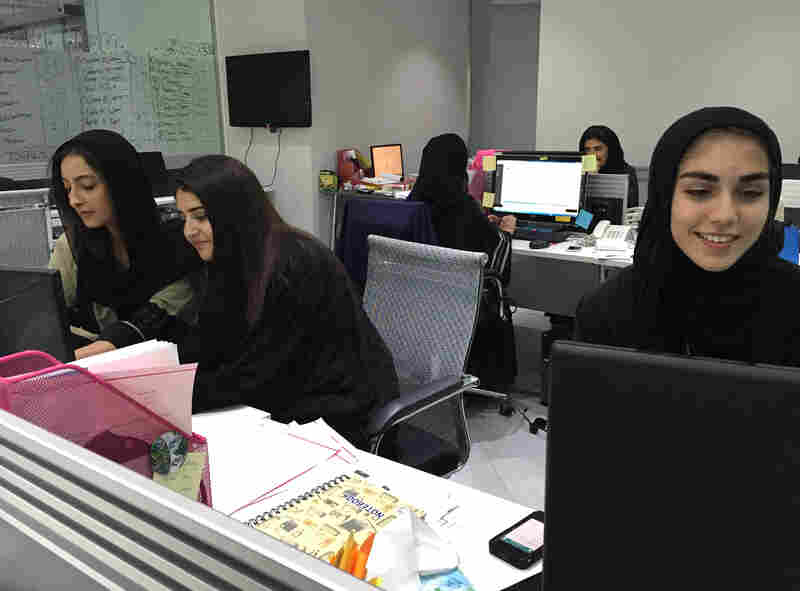 Women at Gloworks, a private company in Saudi Arabia that recruits women for jobs throughout the country. There's now a Glowfit, which includes the first licensed gym for women. Deborah Amos/NPR hide caption

"Once we hire any woman in the workplace, we hit the gong," she says, and then proceeds to strike it.

She has hit the gong thousands of times in the four years Gloworks has been in operation. Now, Gloworks has expanded to include Glowfit — the first licensed fitness center for women.

In a gleaming new gym, a spinning class is just one of the activities offered. There's a smoothie bar — and a prayer mat and a prayer room, in keeping with Saudi culture.

Nejda Nejm says it was her idea to open a gym, and then she persuaded her husband, who founded Gloworks. She's also thrilled by the new education policy of mandatory sports and exercise for Saudi girls.

"I think it's a big deal because this is a way of acknowledging publicly that women need to get the same treatment or care that males do," she says.

In Saudi Arabia, obesity is skyrocketing, which leads to a long list of health problems, including diabetes. The numbers are highest for women and are rising for children and teens.

The new sports policy can lead to better health, says Nouf al-Musehel, a personal trainer who has a full-time job at Glowfit.

"It is a huge dramatic change. And it's beautiful. It's just beautiful to watch the change in Saudi," Musehel says.

Saudi Women Still Can't Drive, But They Are Making It To Work

Not every one agrees. Religious conservatives say exercise for girls is a Westernizing influence, that it has no place in the kingdom and could lead to adultery and prostitution.

Saudi Arabia Will Send Two Women To The Olympics

But ask Hoda al-Helaissi if sports for girls is un-Islamic, and she scoffs.

"What is the saying, 'A healthy mind for a healthy body.' It's a necessary thing," she says.

Helaissi has been part of revolutionary change herself. She made history last year when 30 women were appointed to the Shura Council, a government advisory board chosen by the Saudi king.

"It's like us, when we first went into the council. You think it wasn't done with a lot of opposition. That first year was very difficult, very difficult," she says. "You got hate mail on your private mail. Twitter was talking about it. Everywhere. But society got used to it."

The council went on to make the recommendation to include physical education for girls. She says conservatives will accept this, too, when they see their daughters benefiting as much as their sons.