Accessibility links
Drumbeat Grows Louder For Impeachment Of Brazil's Rousseff : Parallels The second-term president faces a massive corruption scandal at the state oil company that implicates her party, rising inflation and a tanking currency. Now, her popularity is at an all-time low. 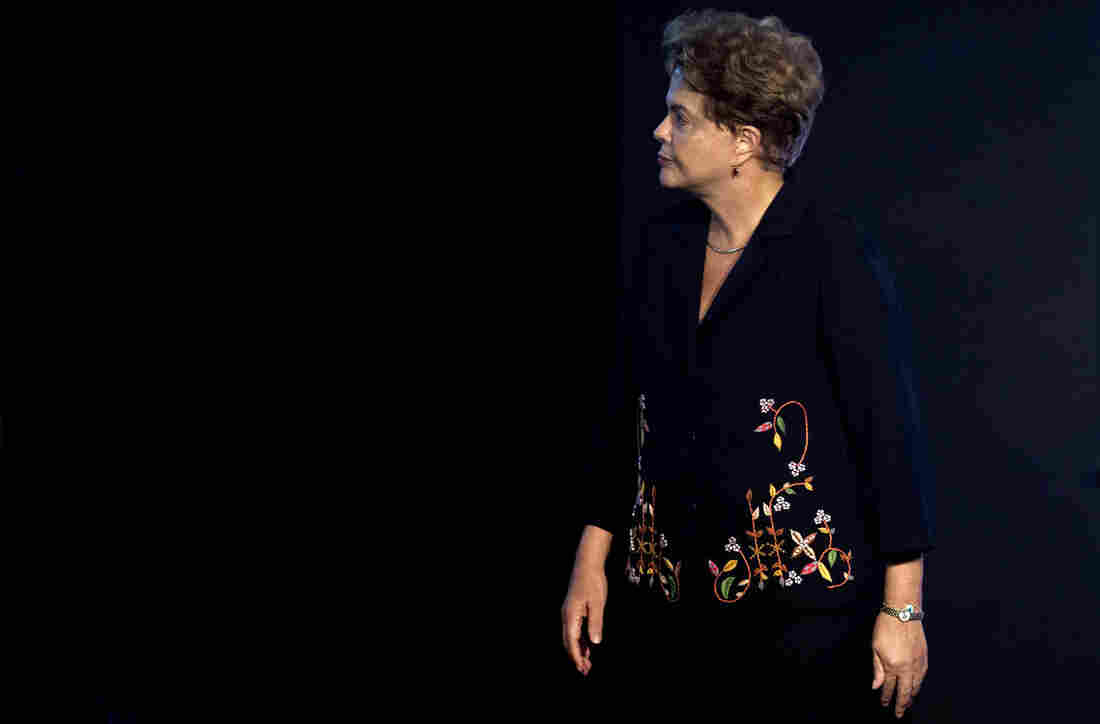 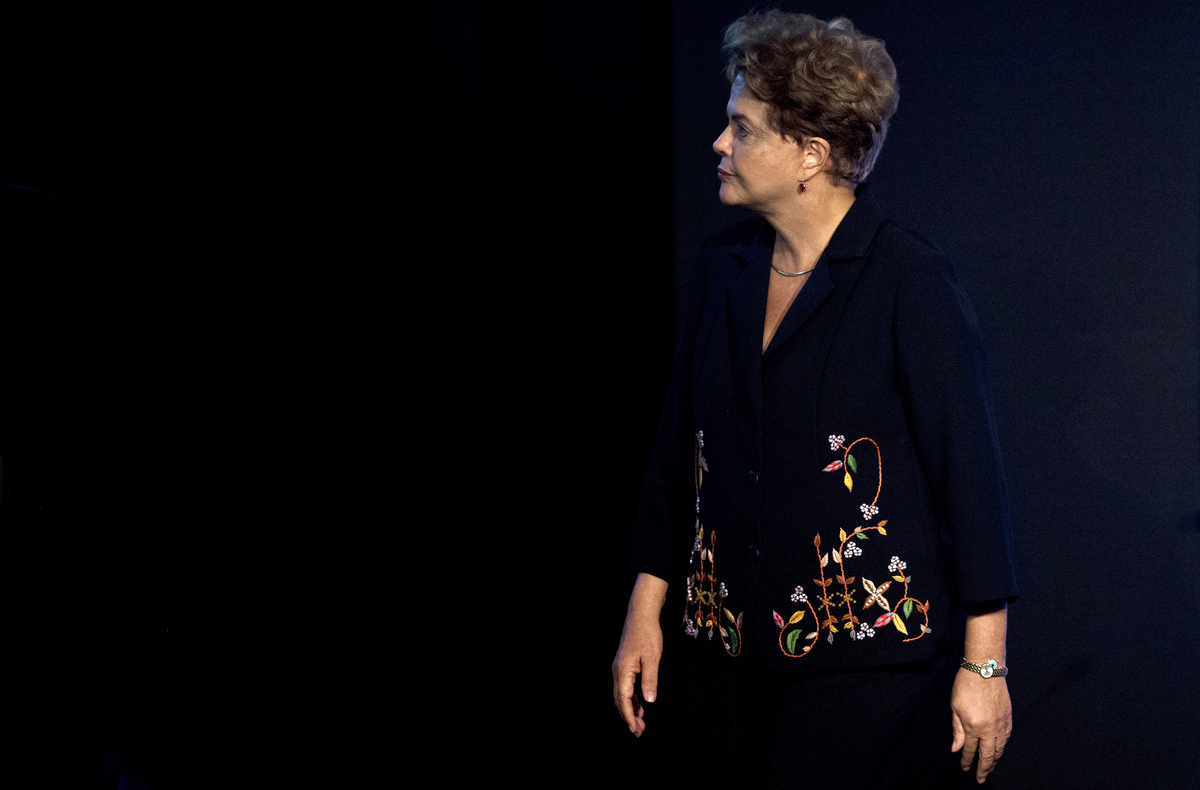 Embattled Brazilian President Dilma Rousseff (shown here at the 21st International Construction Salon in Sao Paulo, Brazil, on Tuesday) was elected four months ago. Her administration has been hit hard by economic problems and a massive corruption scandal at the state oil company, Petrobras.

This week, President Dilma Rousseff descended the famous ramp designed by Oscar Neiymeyer in the presidential palace of Planalto to a crowd of women chanting her name.

The carefully choreographed ceremony was intended to show Rousseff — who was signing into law a ban on femicide — as a leader who has broad support.

But the night before the scene was a very different one. While she was addressing the country on TV, people grabbed their pots and pans and banged on them in protest.

Brazil's Tearful President Praises Report On Abuses Of A Dictatorship

The president is facing a "very tricky situation," says Carlos Pereira, a political scientist at the Getulio Vargas Foundation.

Rousseff was elected only four months ago in the closest elections in modern Brazilian history. She received slightly more than half of the vote. Now, though, her popularity is at 23 percent. The economy is tanking, inflation is rising and investors are fleeing. The Brazilian real is sinking faster than any other currency, according to Reuters.

But what has hit her administration hardest is the Petrobras scandal. The state oil company is at the heart of a kickback scheme to the tune of hundreds of millions of dollars. It's also implicated her party, alleging that illegal funds were funneled to it and her 2010 election campaign.

In all, dozens of politicians are under investigation, including the heads of both houses of congress and half of the congressional ethics committee.

"Their neck is under threat so right now they are putting the government in trouble," Pereira says. "Their strategy right now is to make the president fragile. They are signaling to the government that they have something to trade."

That trade is legislation. Already there has been trouble passing key laws that are seen as vital to restarting the economy. Pereira says Rousseff 's coalition is too broad and diffuse and she has treated many of her allies badly.

As a result, there's little goodwill. In fact, on Friday, a member of her coalition was the one to formally put forward a petition for her impeachment in congress. 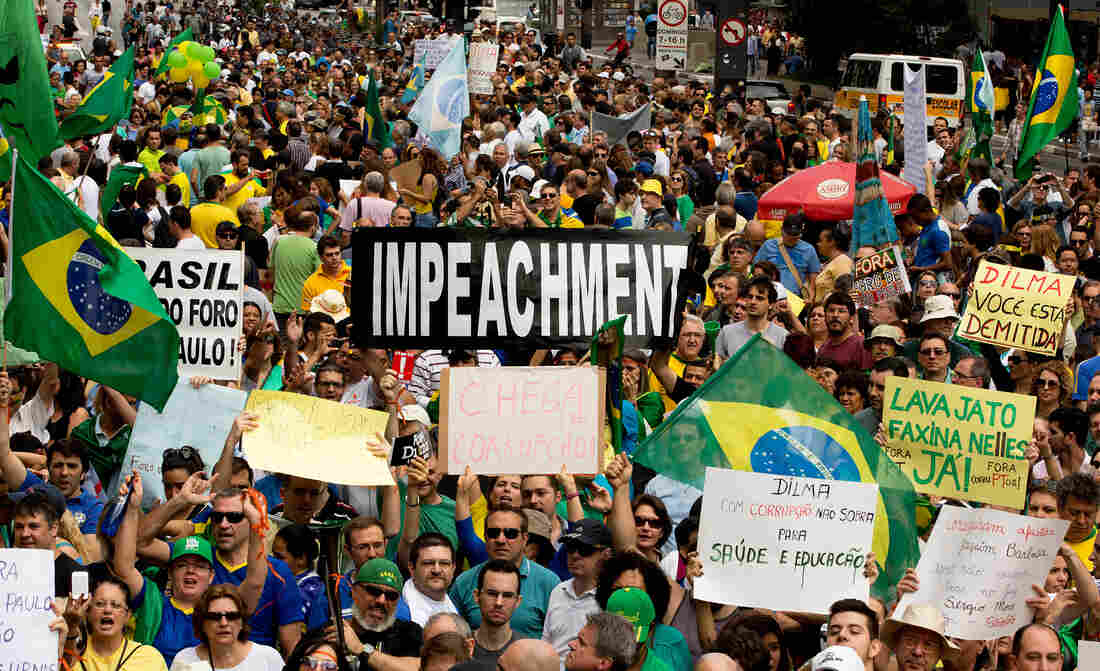 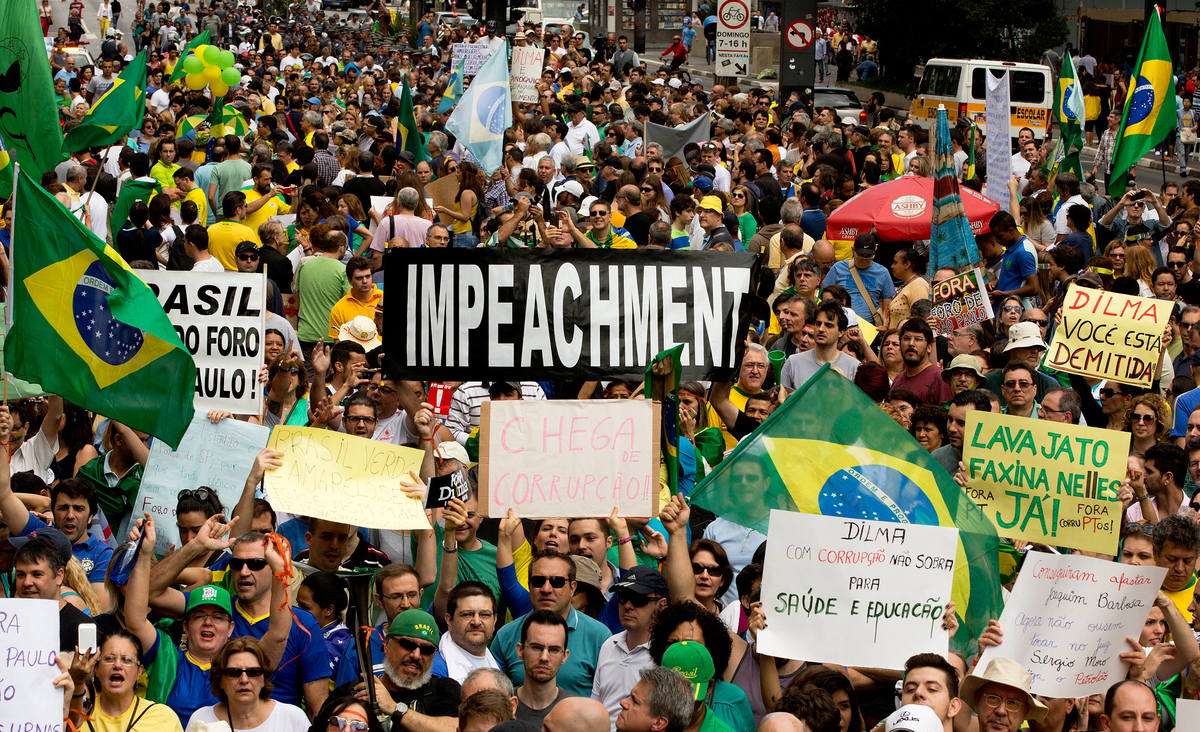 On the streets of Rio de Janeiro Thursday night, Rodrigo da Fonseca handed out fliers asking people to attend this Sunday's protest. He lists all the country's problems since Rousseff's election in 2010

"Gas prices have gone up, the water system has been destroyed, our electricity bills are going up," he says. "We are tired of paying for the mistakes of the government, their rampant spending. People are on strike, unemployment is rising, our taxes are high and we see nothing for it."

It remains to be seen, though, how much traction the movement will get. Pro-government marches took place in cities across Brazil on Friday, garnering a few hundred to a few thousand supporters in each location.

The anti-government demonstrations will have to mobilize many more than that, if they want to unseat a democratically elected leader.