Accessibility links
How Yemen's Chaos Stretches Beyond Its Borders : Parallels The U.S. has lost a key base for counterterrorism operations. The proxy war between Iran and Saudi Arabia is heating up. And one more Middle Eastern state has dissolved into chaos.

How Yemen's Chaos Stretches Beyond Its Borders

How Yemen's Chaos Stretches Beyond Its Borders 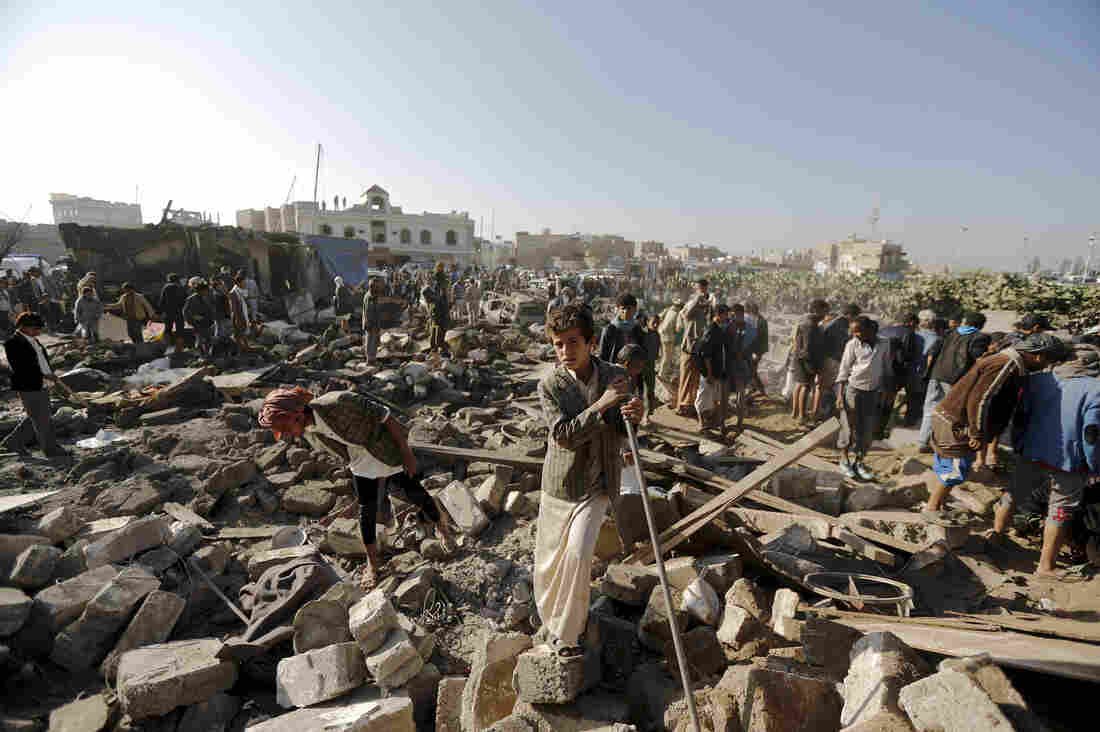 People examine the rubble following an air strike near the airport in Yemen's capital Sanaa on Thursday. Saudi Arabia said it carried out bombing raids in neighboring Yemen as Houthi rebels, allied with Iran, continued their offensive in the country. Yemen's president fled the country Wednesday and was reported to be in Saudi Arabia on Thursday. Khaled Abdullah/Reuters/Landov hide caption 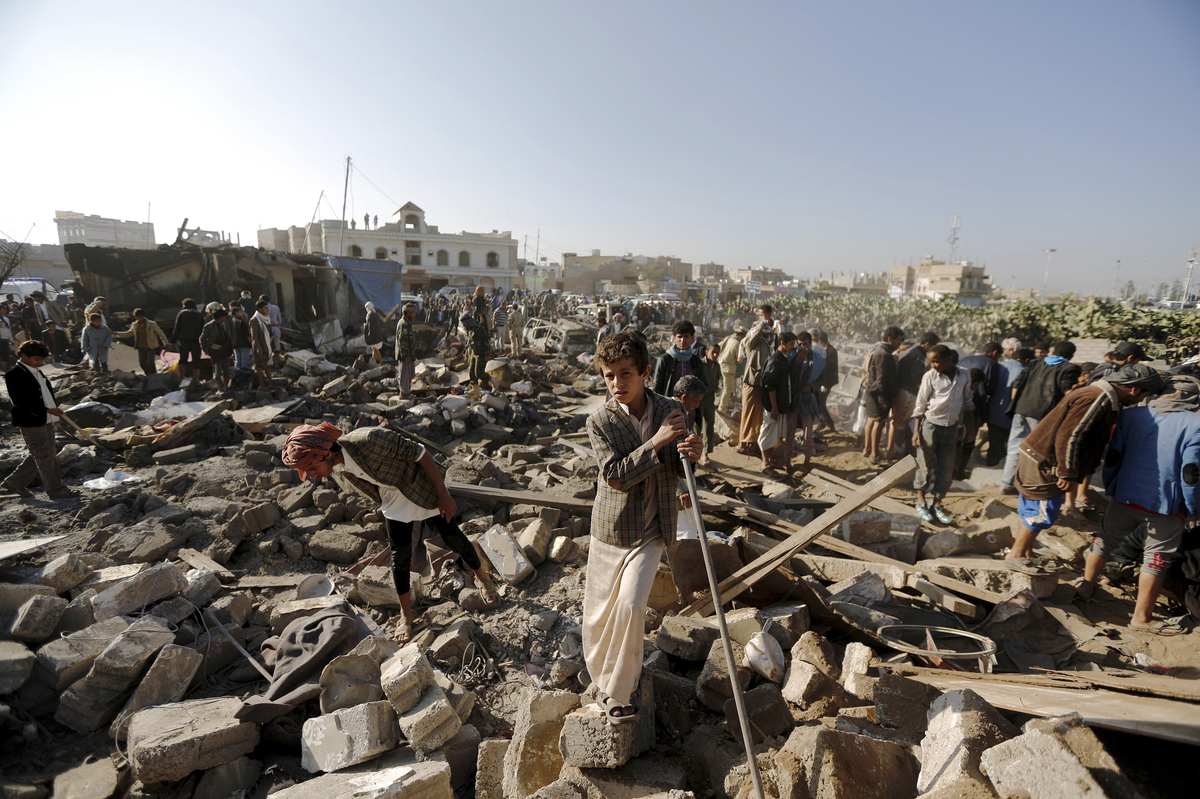 People examine the rubble following an air strike near the airport in Yemen's capital Sanaa on Thursday. Saudi Arabia said it carried out bombing raids in neighboring Yemen as Houthi rebels, allied with Iran, continued their offensive in the country. Yemen's president fled the country Wednesday and was reported to be in Saudi Arabia on Thursday.

Yemen's downward spiral toward civil war is a disaster for the poorest country in the Arab world and adds one more member to the growing list of Middle East states that have imploded in the past several years.

But how important is Yemen to the wider world?

One argument holds that Yemen is, and always has been, an isolated backwater. The chaos is tragic for Yemenis, but remains largely an internal feud between rival groups and will have limited spillover beyond its borders.

Yet Yemen is also a battleground in larger fights that pit the U.S. versus al-Qaida and Saudi Arabia versus Iran. All these players have a stake in Yemen and the collapse of Yemen's government and the rise of the Houthi rebels has rewritten the rules of the game.

With the Houthi rebels advancing, Yemen's President Abed-Rabbo Mansour Hadi fled the coastal city of Aden by boat on Wednesday. He turned up Thursday in Saudi Arabia, according to Saudi television.

Here's a look at several key issues and how they might play out:

A Blow To The U.S.: The U.S. worked closely with Hadi on counterterrorism operations for years. Just a few months ago, President Obama cited Yemen as success story. But the U.S. is now without a partner.

As the government military has disintegrated, the U.S. closed the embassy, pulled out Special Operations forces and abandoned a base where drones were used to provide surveillance and carry out strikes against al-Qaida in the Arabian Peninsula, or AQAP. The Pentagon can continue to operate in the skies over Yemen, but it has relied on Yemen's security forces for intelligence and will now face tougher challenges.

AQAP is considered the most dangerous al-Qaida franchise and pressure on the group may ease. The Houthi rebels are also enemies of al-Qaida, but the Houthis lack the high-tech capabilities that the U.S. and the Yemen military could deliver. 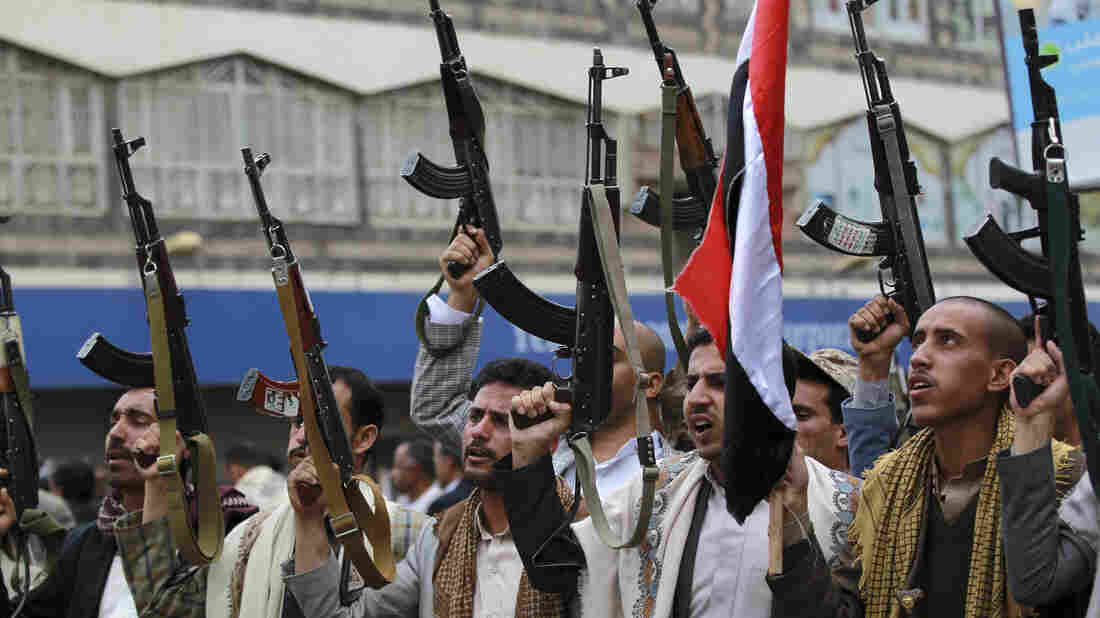 Shiite Houthi rebels hold up their weapons in a protest Thursday against Saudi Arabian airstrikes in Yemen's capital Sanaa. Saudi Arabia bombed military installations as the rebels, aligned with Iran, pressed ahead with their advance. Hani Mohammed/AP hide caption 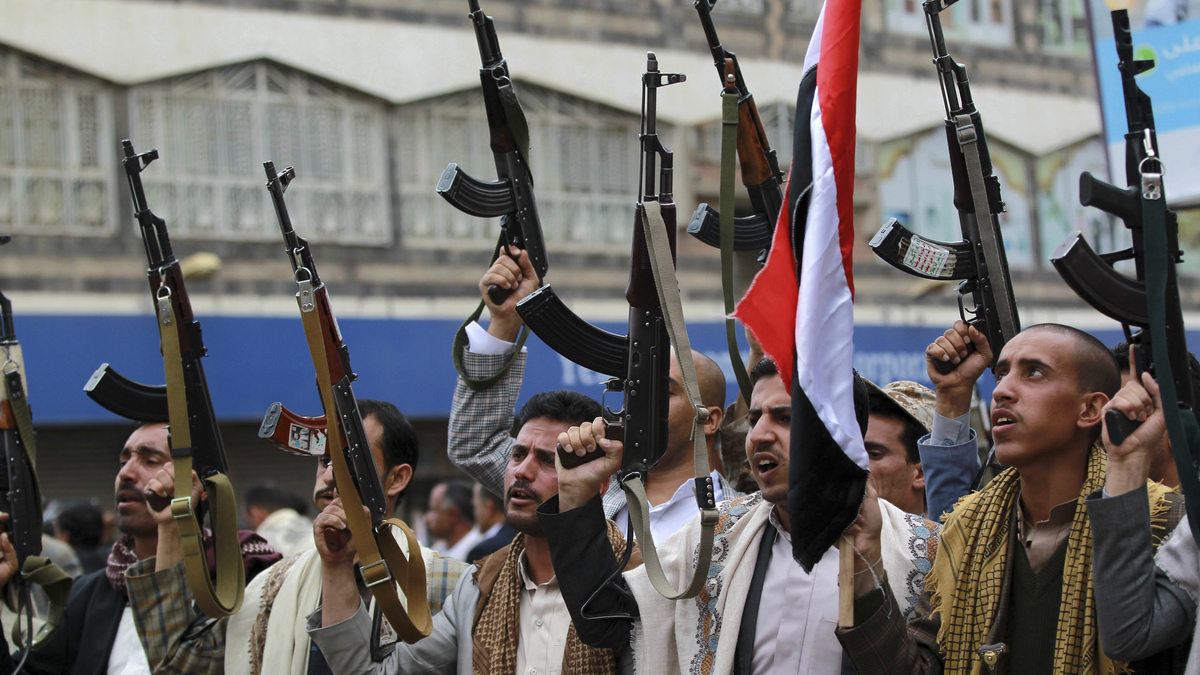 Shiite Houthi rebels hold up their weapons in a protest Thursday against Saudi Arabian airstrikes in Yemen's capital Sanaa. Saudi Arabia bombed military installations as the rebels, aligned with Iran, pressed ahead with their advance.

Iran Vs. Saudi Arabia: Many analysts view the Middle East turmoil through the lens of the long-running proxy war between Saudi Arabia and Iran.

Saudi Arabia, which sees itself as the standard bearer for Sunni Islam, is alarmed by the chaos in Yemen, a mostly Sunni country. Yemen appears on the verge of a humanitarian crisis and the Saudis fear a flood of refugees coming across its southern border.

The Saudis also see an expansion of Iranian influence because the Houthi rebels are closely linked to Iran, the leading voice of Shiite Islam. Iran has reportedly provided arms to the Houthis, though Iran denies this.

"Yemen joins other failed states in the region that have become proxy wars between the Saudis and Iran," NPR's Deborah Amos told Morning Edition. "We've seen this in Syria, we've seen this in Iraq."

The Saudis carried out air strikes in Sanaa before dawn on Thursday, targeting military installations the Houthis had taken over. The Saudis have also massed troops on Yemen's northern border.

"It is the first major challenge for Saudi Arabia's new king (Salman), who sees enemies all around and no easy ways of defeating any of them," Yochi Dreazen and John Hudson wrote in Foreign Policy.

As messy as Yemen is, it's likely to received limited international attention given all the other fires blazing in the region from Iraq to Syria to Libya. Yemen has always been an unruly land where government control dwindled rapidly the further one traveled from the capital.

The Saudis are likely to make the biggest investment because they are the most vulnerable to a refugee crisis and security problems. But the Saudis had limited success when they entered northern Yemen in 2009 in a bid to suppress a Houthi uprising.

At a relatively low cost, Iran could support the Houthis, as they have done with other Shiite allies in the region.

For the U.S., Yemen represents the expansion of ungoverned real estate in the Middle East that has proved fertile ground for terror groups. After the 9/11 attacks, many in the U.S. government and security establishment argued that America had to prevent failed states from becoming incubators for groups like al-Qaida.

But the relentless Middle East upheavals have created so many unstable lands and attracted so many radicalized fighters from so many places that no one is calling for a major U.S. role in Yemen.