Accessibility links
The Iranian Nuclear Talks: It Isn't Just About The Nukes : Parallels President Obama has sought a less hostile relationship with Iran. The nuclear framework agreement points to the possibility of broader cooperation that could reorder the Middle East.

The Iranian Nuclear Talks: It Isn't Just About The Nukes

The Iranian Nuclear Talks: It Isn't Just About The Nukes 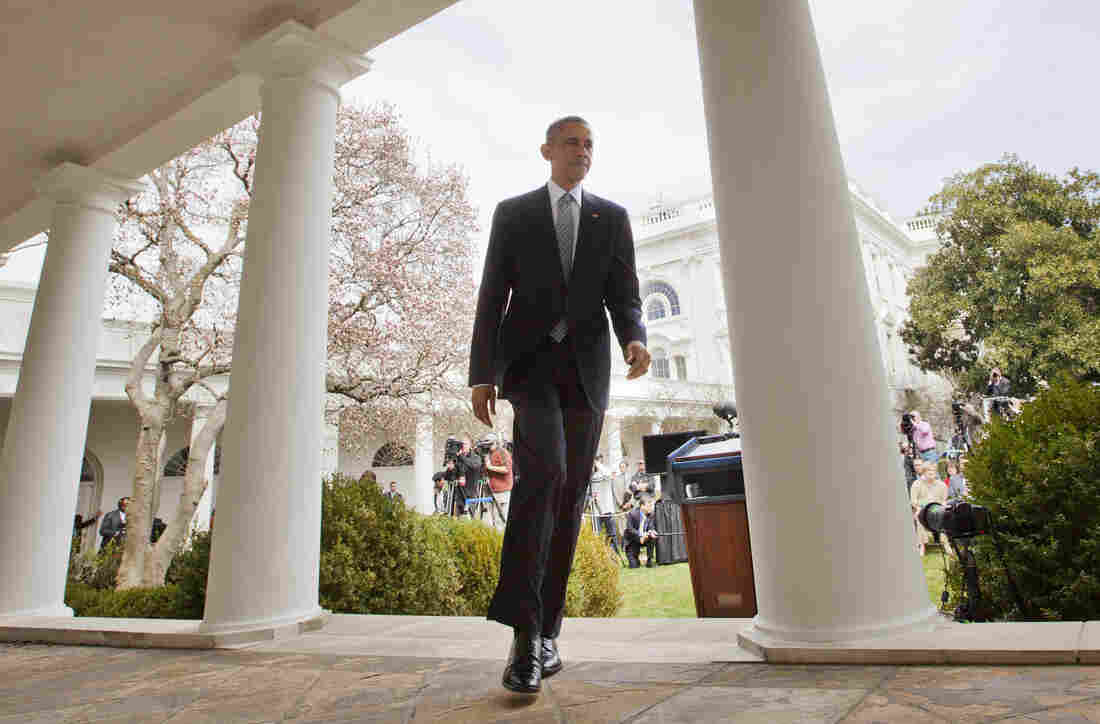 President Obama walks back to the Oval Office on Thursday after speaking about the framework nuclear deal with Iran, which he described as "historic." Since the first days of his presidency, Obama has pursued a less hostile relationship with Iran despite critics who call the approach naive. Pablo Martinez Monsivais/AP hide caption 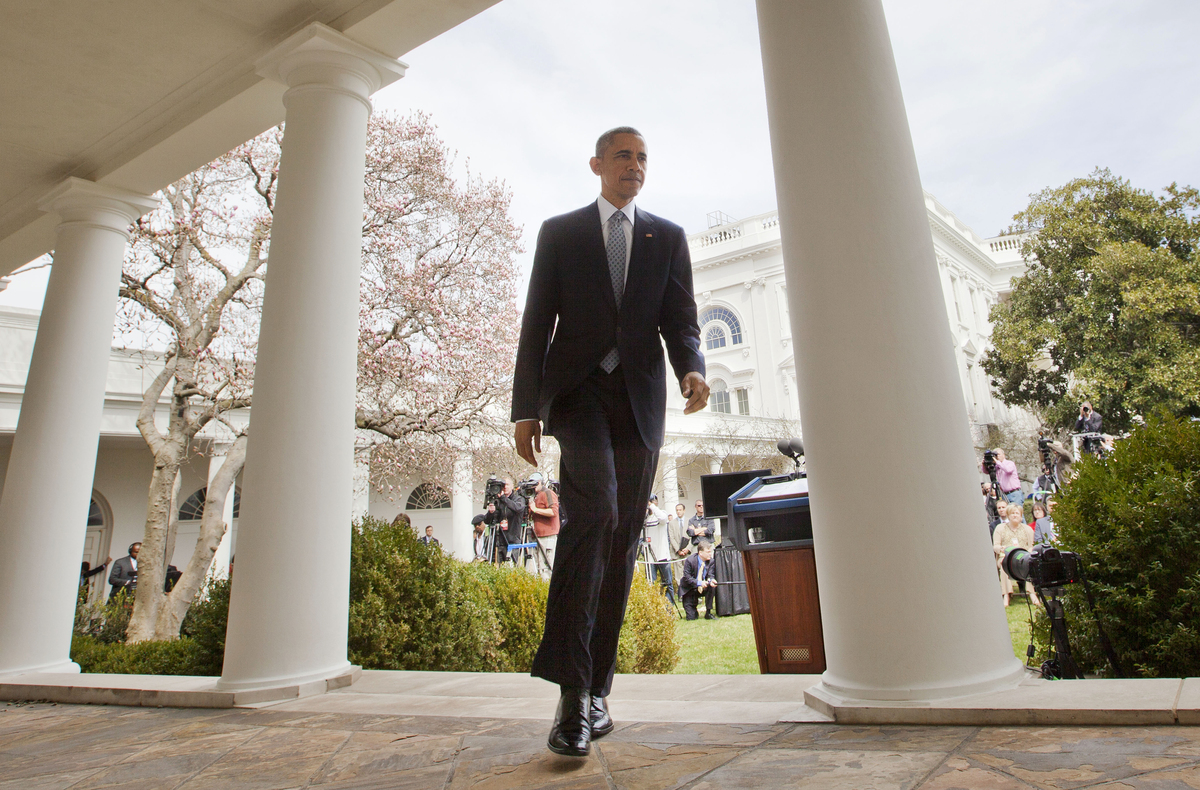 President Obama walks back to the Oval Office on Thursday after speaking about the framework nuclear deal with Iran, which he described as "historic." Since the first days of his presidency, Obama has pursued a less hostile relationship with Iran despite critics who call the approach naive.

The Iranian nuclear negotiations have focused on one very big and specific question: Will a deal make it harder for Iran to acquire a nuclear weapon?

But the talks are also part of President Obama's much broader quest to repair the fractured relations between the U.S. and Iran, one defined by bitter recriminations in the 36 years since Iran's Islamic revolution in 1979.

"To the Iranian people, I want to reaffirm what I've said since the beginning of my presidency. We are willing to engage you on the basis of mutual interests and mutual respect," Obama said in remarks at the White House immediately after the nuclear framework was announced.

His approach to Iran has been in contrast to his general posture on the Middle East, where he's sought to scale back the high-profile U.S. presence in several areas. But with Iran, the president has pursued improved relations based on the notion that this could eventually reorder the Middle East.

It's a risky bet that faces critics who point to Iran's aggressive actions on many fronts.

Thursday's breakthrough came after some 18 months of negotiations that erased the taboo of top-level meetings between the two countries. Secretary of State John Kerry has reportedly spent more time with his Iranian counterpart, Javed Zarif, than any other foreign diplomat.

These talks have played out amid infernos across the region. As the U.S. and Iran try to define their roles, they are virtual partners in some places, and remain rivals in others.

With this in mind, here's a look at the potential ramifications of a U.S.-Iran détente. First, the upside:

Potential To Cooperate Openly: The U.S. and Iran share common enemies. Both oppose the Taliban in Afghanistan and the self-described Islamic State in Syria and Iraq.

The U.S. and Iran are already fighting on the same side in Iraq. The U.S. Air Force is bombing the Islamic State from the air and Iran's Revolutionary Guards are advising the Iraqi security forces on the ground. The U.S. and Iran both take great pains to say there's no formal military cooperation.

But the practical impact is a joint air-and-ground campaign that just this week helped the Iraqis dislodge the Islamic State from Tikrit, the first major city the extremist group has lost since sweeping into Iraq last summer.

U.S. Gen. Martin Dempsey, chairman of the Joint Chiefs of Staff, described the Iranian actions in favorable terms when he testified to Congress last month:

"I think there's general consensus, both inside of our own forces and also with the coalition partners with whom I engage, that anything anyone does to counter (ISIS) is in the main a good outcome. In other words, the activities of the Iranians — the support for the Iraqi security forces — is a positive thing in military terms."

Balance Of Powers: Obama's overarching foreign policy goal is to pivot to Asia, devoting greater political, economic and military resources to the Pacific Rim, which would inevitably mean less emphasis on the Middle East.

Many analysts warn that if the U.S. pulls back too rapidly it would leave a vacuum in the world's most unstable region. Still, some argue that if the U.S. wants to shrink its Middle East footprint it will have to work out a strategic understanding with Iran. It doesn't mean that the U.S. and Iran would be friends, but their combined powers could stabilize the Middle East.

"The Levant will likely be in a state of violent and chaotic conflict for decades, much as Afghanistan has been since the late 1970s," global affairs analyst Robert Kaplan wrote recently in The Atlantic. "The more the United States and Iran coordinate with each other, the less chance there is that America will have to put additional boots on the ground in the Middle East."

Even if the Iranian nuclear deal succeeds in keeping Iran from getting a bomb, it comes with other risks. 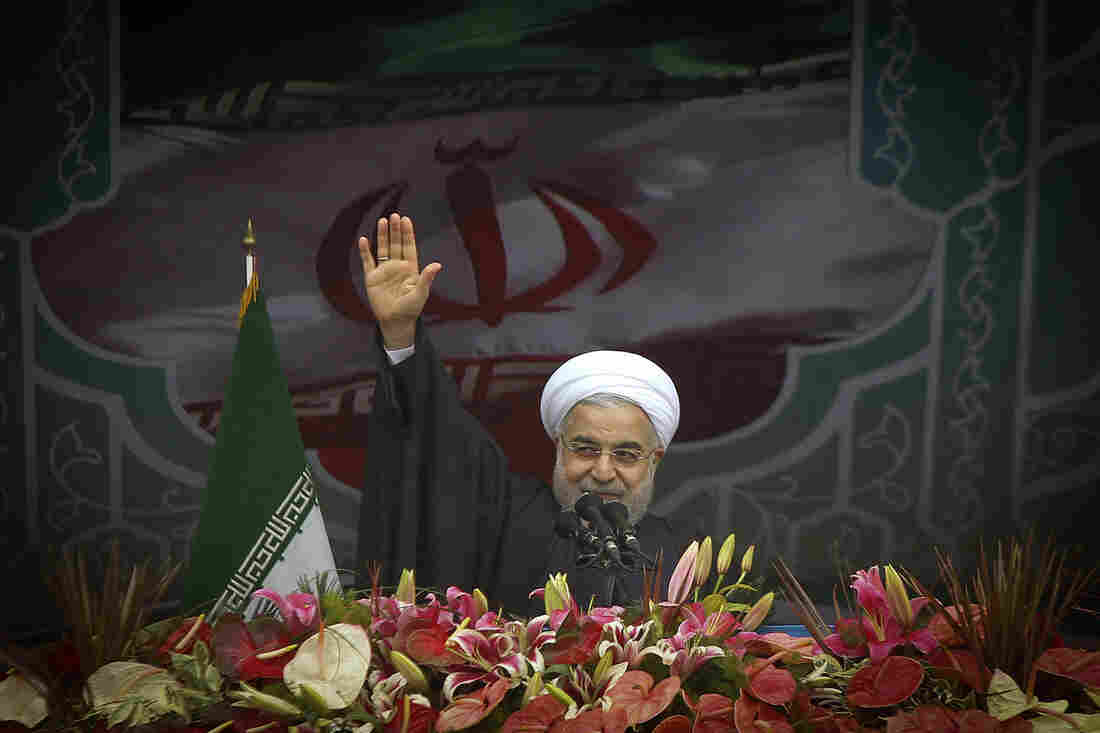 Iran's President Hassan Rouhani, speaking in Tehran in February, has spoken out in favor of nuclear negotiations and opening Iran to the world. But he has faced criticism from hard-liners at home. Ahmad Halabisaz/Xinhua/Landov hide caption 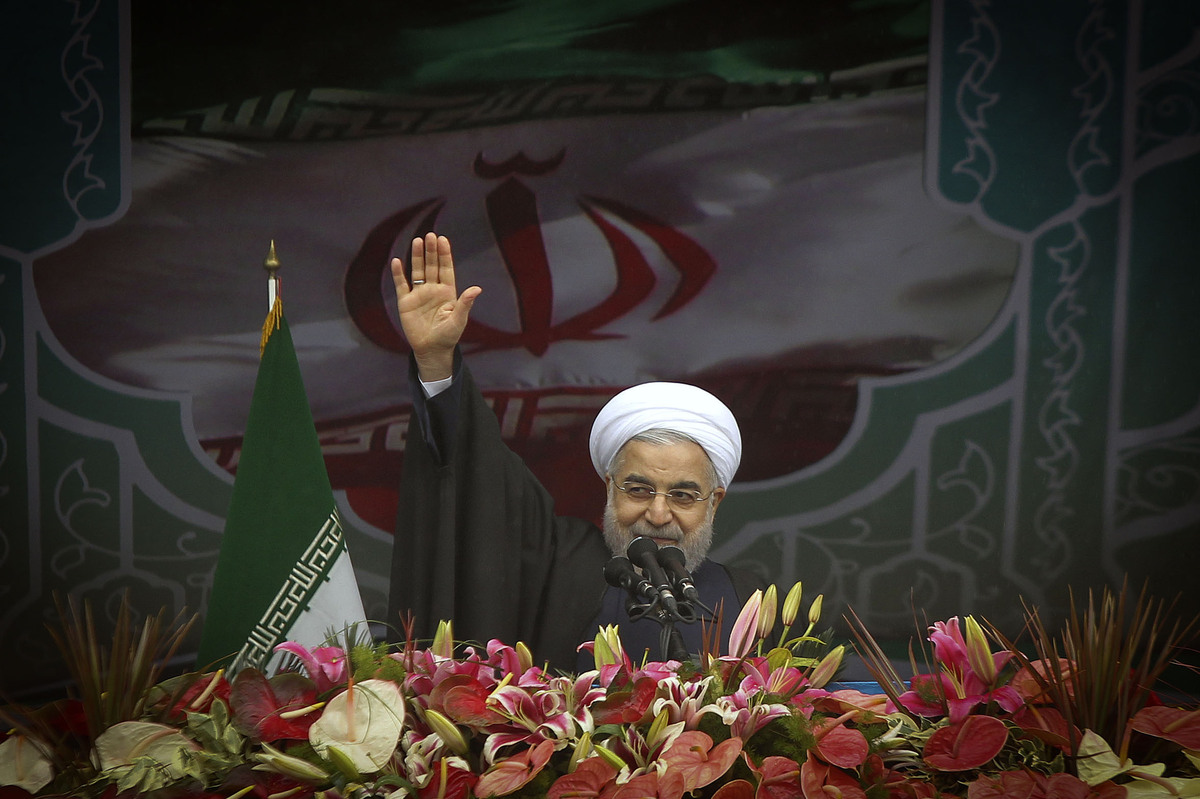 Iran's President Hassan Rouhani, speaking in Tehran in February, has spoken out in favor of nuclear negotiations and opening Iran to the world. But he has faced criticism from hard-liners at home.

Iran Is Rehabilitated Without Reforming: A nuclear agreement would give Iran sanctions relief and much greater legitimacy in the international community. Iran's fragile economy stands to improve and it will be less isolated.

But would Iran's behavior change?

Iran's critics say the country would receive all these benefits and would be emboldened to press ahead with its expansive policies that the U.S. and its allies see as destabilizing.

Iran already wields considerable influence in four Arab capitals through its Shiite allies — in Lebanon through Hezbollah, in Syria through President Bashar Assad, in Iraq through the Shiite-led government and in Yemen through the Houthi rebels.

In this view, a nuclear deal could have the unintended consequence of strengthening Iran on multiple fronts unrelated to its nuclear program.

Strained U.S. Relations With Mideast Allies: Israel and Saudi Arabia both see Iran as their most dangerous rival and are highly critical of the nuclear talks and any reconciliation between the U.S. and Iran.

"The smiles in Lausanne (Switzerland) are detached from wretched reality in which Iran refuses to make any concessions on the nuclear issue and continues to threaten Israel and all other countries in the Middle East," Israel's Strategic Affairs Minister Yuval Steinitz said after the framework deal was announced.

Israel and the Saudis believe an improvement in U.S.-Iran relations will come at their expense and chip away at the extremely tight security relations they've had with the U.S. for decades.

They want the U.S. to take a tough line with Iran's ayatollahs not only on the nuclear question, but on every other regional issue. Many Israeli and Saudi leaders believe the Obama administration has been naïve and indecisive on Iran, and thereby enabled aggressive Iranian behavior.

The Middle East meltdown in recent years has already upended alliances and rivalries locked in place for decades. The Iranian nuclear talks, while still a work in progress, are already showing signs of shaking up the region once again.

Greg Myre is the international editor of NPR.org. Follow him at gregmyre1.