Accessibility links
Smuggler To Desperate Migrants: 'Now I Am Sending You To Your Death' : Parallels More migrants are leaving from chaotic Libya in a bid to reach Europe. The overcrowded boats are at risk of sinking, and some do. A Syrian man tells of the treacherous journey with his young son. 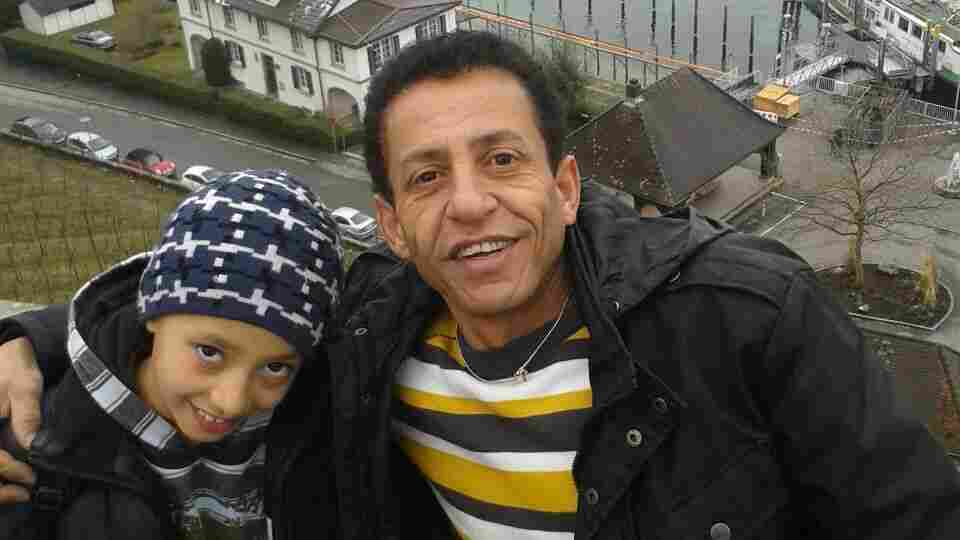 Emad al-Masaadi, 41, and his son Hamudeh, 9, from Damascus, Syria, now live in Friedrichshafen, Germany, where they are seeking asylum. Last year, the two traveled from Libya to Italy on a smuggler's boat that nearly sank with 400 people onboard. Hassan Ajjawi for NPR hide caption 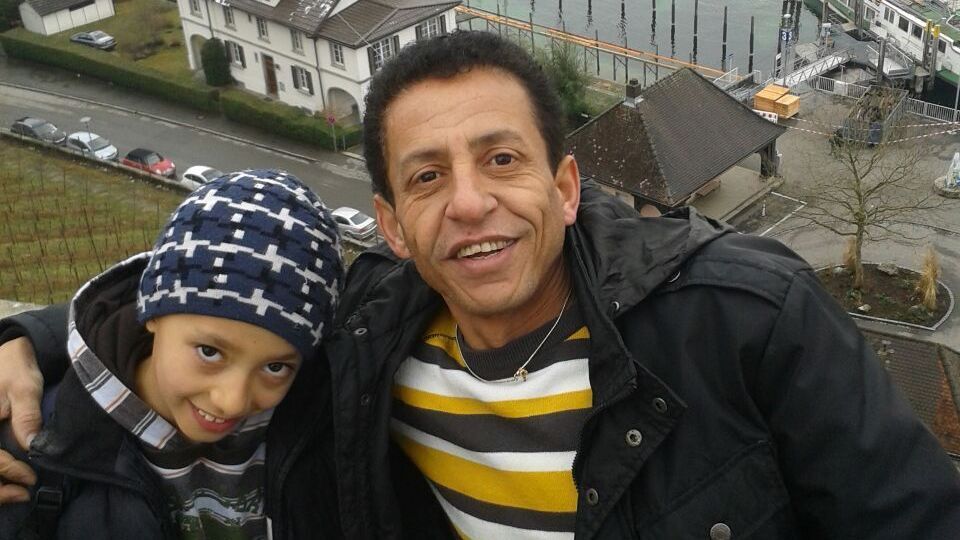 Emad al-Masaadi, 41, and his son Hamudeh, 9, from Damascus, Syria, now live in Friedrichshafen, Germany, where they are seeking asylum. Last year, the two traveled from Libya to Italy on a smuggler's boat that nearly sank with 400 people onboard.

Emad al-Masaadi, a 41-year-old house painter and taxi driver, fled Damascus with his wife and three young boys after their home was bombed in late 2012, just one of the countless hard-luck stories generated by Syria's civil war. They landed in Beirut, but after more than a year without work or cash, Masaadi wanted out.

"So I asked my friends, 'How can we get to Europe?' " says Masaadi, an industrious and optimistic man with a gracious smile.

The answer was clear: "Smugglers were the only way," he recalls.

He ruled out various routes as too long, too expensive or both. Some smugglers wanted to charge $12,000 a person.

"Then another friend suggested going through Libya," he says. "He said it was cheaper and, since there was no working government, the police did not catch you."

"I was afraid he would hear my fear. So I sang to him. I stroked his hair and promised he would have a bicycle in Germany."

More and more people fleeing war and poverty in Africa and the Middle East are making the dangerous journey across the Mediterranean from chaotic Libya — including the some 800 migrants who died this weekend when their overcrowded ship sank.

Masaadi found a Syrian smuggler in Algeria who would handle the itinerary, which included flying to Algiers, then trekking through Algeria and Libya to reach the coastal town of Zuwarah, a hub for people-smuggling.

He wanted to go by himself, but his then-8-year-old son, Hamudeh, worried that his father would get lonely or lost and refused to let him go alone.

Last August, Masaadi paid the smuggler $3,000 — $1,500 each for himself and Hamudeh. The father and son kissed the rest of the family goodbye and boarded a plane from Beirut to Algiers, beginning a journey they hoped would end in Germany, where Masaadi had relatives.

He texted his wife when they landed at the Algiers airport, telling her they had arrived safely. The smuggler told him to shut off his phone and not use it again until he reached Italy. Then the smuggler led a group of 14 Syrians on the trip through southern Algeria to Libya.

A Trek Through The Desert

They walked by moonlight through the desert to slip past military checkpoints. It was hot and sometimes gusty, and Hamudeh's long lashes were often frosted with sand.

By day, they took buses and cars until they reached a Libyan border town where everyone seemed to have a Kalashnikov. Masaadi paid a Libyan smuggler $4,000 for transport for two to Italy.

The group spent the next week walking and driving through the Libyan desert, stopping at smuggler-approved homes in villages. At one point, a group of 10 men stopped them and held automatic rifles to their heads while they searched the Syrians' pockets for money. 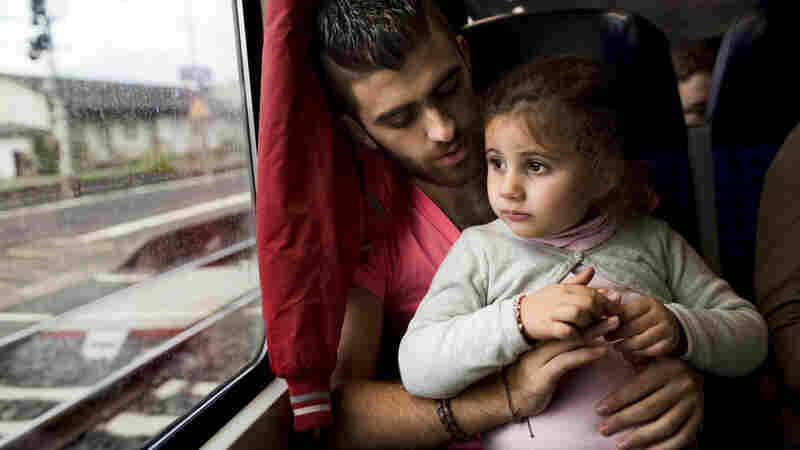 READ: With Syria Engulfed In Civil War, Here Are Four Stories Of Families Trying To Stay Together
More than 200,000 refugees have settled in Europe since the start of the Syrian conflict. Holly Pickett for NPR hide caption

The Fences Where Spain And Africa Meet

U.N. Calls On EU To Expand Rescue Of Migrants In Mediterranean

"But we only had our clothes and some food," Masaadi recalls. The men finally released them.

The group then traveled to Zuwarah. Four days later, they were camped out near the beach, guarded by armed men. There was no food.

"They wanted to cram as many of us as possible on the boat," he says.

The trip began on their second night on the beach.

"It looked like it could hold 20 or 30 people," he says of the wooden ship that was supposed to carry them across the Mediterranean. "But when we arrived, there were already 200 inside."

He remembers what the smuggler said as they boarded the vessel: "Now I am sending you to death."

By the time the boat left, there were 400 people onboard.

"There was no room even to sit down," Masaadi says. "We were all pressed together. I couldn't see much of anything, just children holding their mothers' legs. I could hear men and women praying together, asking God to keep us safe. We were at sea just two hours when water started coming into the boat."

"Are we going to die, Baba?" Hamudeh asked his father.

"Absolutely not," his father replied. "I promise." 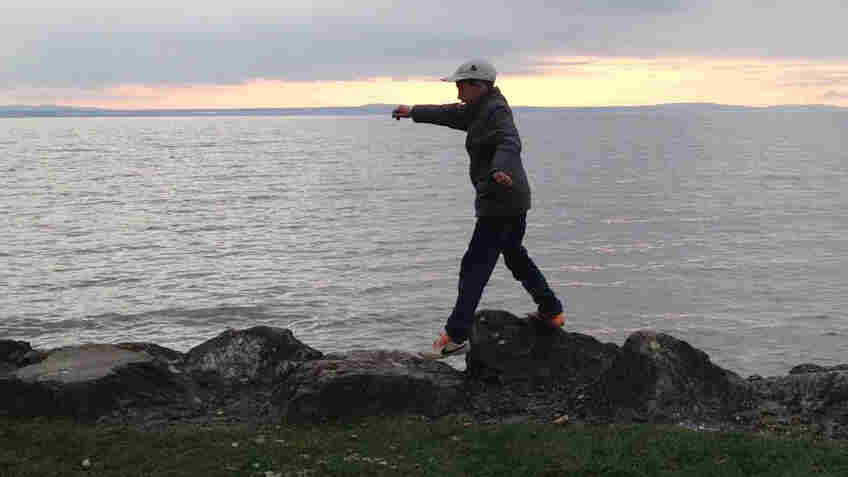 Hamudeh al-Masaadi plays on the shores of Lake Constance near Friedrichshafen, where they wait as their request for asylum is processed. Joanna Kakissis for NPR hide caption 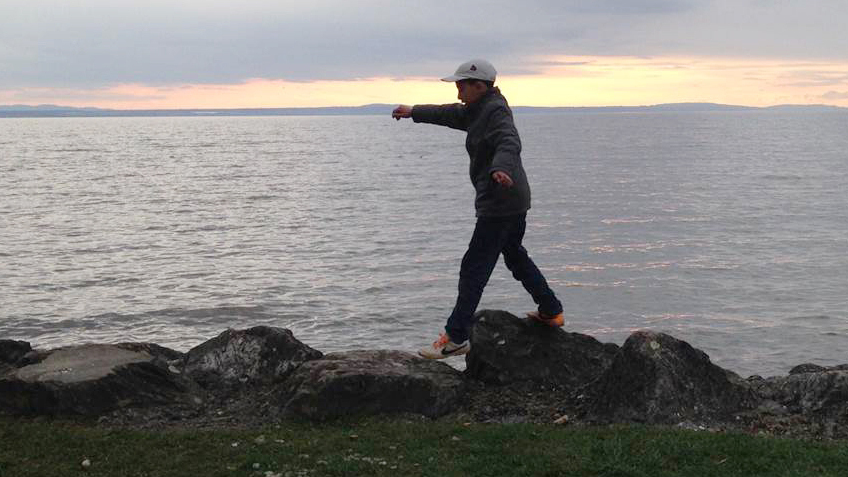 Hamudeh al-Masaadi plays on the shores of Lake Constance near Friedrichshafen, where they wait as their request for asylum is processed.

"I was afraid he would hear my fear," Masaadi recalls. "So I sang to him. I stroked his hair and promised he would have a bicycle in Germany."

The 400 people traveled for 50 hours, with no food or water. As the boat neared Italy, it had taken in so much water it was starting to sink. He remembers people crying, screaming, kissing their children goodbye.

Then the Italian coast guard spotted them, took the passengers off the sinking vessel and transported them to Calabria, Italy.

Masaadi texted his wife as soon as they arrived, the first time he was able to do so in nearly a month. "We are good," he wrote. "Thank God."

"I tell them not to go, that if I had to take this journey again, I would not. ... They know this route is deadly, but staying home is deadly too. They keep saying, 'Well, you made it.' This is a sign of hope for them. That is how desperate they are."

She called, weeping. She had seen reports about drownings off the Italian island of Lampedusa.

Masaadi and his son traveled from Italy to Germany, where they applied for asylum in September. They are among the 200,000 people who sought asylum in the country last year.

They now live in refugee housing in Friedrichshafen, a small, scenic city on Lake Constance in southwestern Germany. Hamudeh, now 9, already speaks German fluently, his father says. He has a bicycle now, which he sometimes rides along the lake, where he likes to watch the swans and the local fishermen.

"He is a brave little boy," his father says, his voice husky with emotion. "I know how scared he was, but he never stopped believing in me."

If Masaadi receives asylum, it would allow him to bring his wife and two other sons from Lebanon. He says he gets more calls every day from other Syrians who want to contact his smugglers for passage from Libya to Italy.

"I tell them not to go, that if I had to take this journey again, I would not," he says. "Yet they still call those smugglers. They know this route is deadly, but staying home is deadly too. They keep saying, 'Well, you made it.' This is a sign of hope for them. That is how desperate they are."