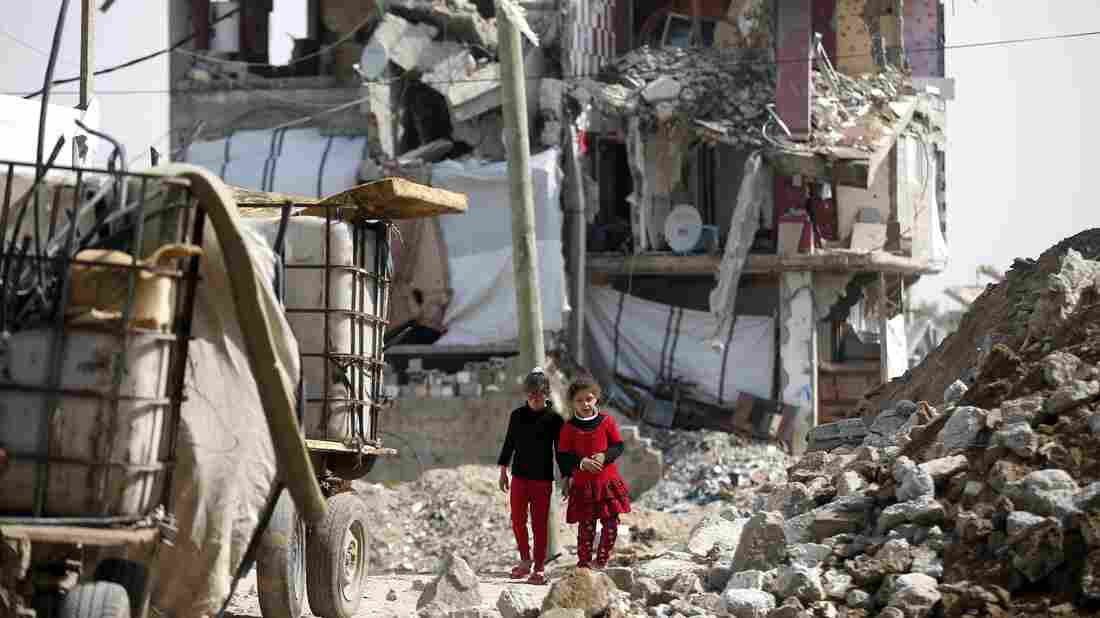 Palestinian girls walk past buildings in Gaza City that were destroyed during the 50-day war between Israel and Hamas militants in the summer of 2014. Dozens of Israeli soldiers have now given testimonials saying that indiscriminate firing was tolerated, or even encouraged at times. Thomas Coex /AFP/Getty Images hide caption 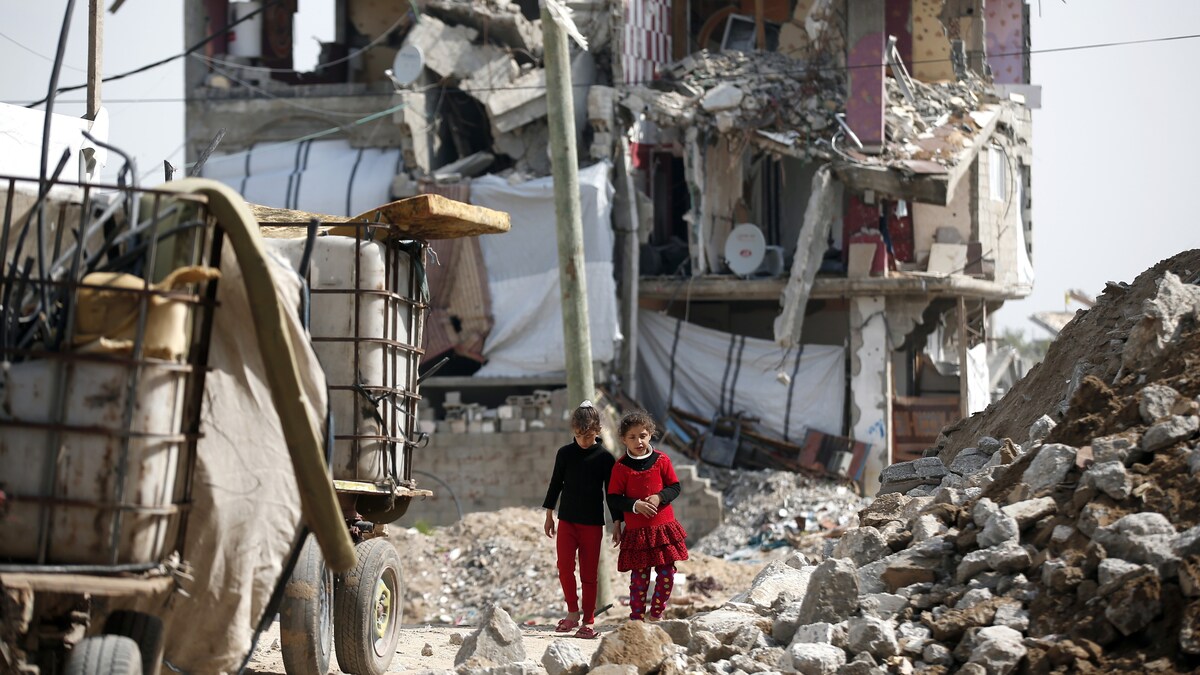 Palestinian girls walk past buildings in Gaza City that were destroyed during the 50-day war between Israel and Hamas militants in the summer of 2014. Dozens of Israeli soldiers have now given testimonials saying that indiscriminate firing was tolerated, or even encouraged at times.

More than 60 Israeli soldiers who took part in last summer's war in Gaza have offered firsthand combat stories. Many said they felt their orders went too far, leading to indiscriminate fire and Palestinian civilian deaths.

The testimonials were gathered by Breaking the Silence, an Israeli group made up of former soldiers. The group has gathered similar material following previous Israeli combat operations over the past decade.

The intense fighting in Gaza lasted 50 days last summer, and by the end, more than 2,200 Palestinians had been killed — many of them civilians — along with more than 70 Israelis, mostly soldiers.

The militant Islamist group Hamas fired rockets into Israeli cities and towns and the Israelis carried out an air and ground campaign that devastated many parts of the small, congested coastal territory.

However, the Israeli soldiers who spoke to Breaking the Silence tell a different story.

An Israeli soldier says troops were given vague orders, which led to indiscriminate firing in the 2014 war against Hamas in Gaza. The Israeli group Breaking the Silence collected the testimonials, but obscured the faces of the soldiers.

One young Israeli sergeant who spoke with Breaking the Silence also spoke with NPR. He said he was a tank gunner in the central Gaza Strip. He was surprised when his commander said anything within 200 yards was fair game to shoot.

One day he was told to pick a target, any target, and fire a tank shell at it in memory of a fellow Israeli soldier who had been killed. He said he and others played a game trying to hit moving cars along a main north-south road in Gaza. He admitted it's fun to fire a tank.

"I can destroy buildings and I'm only 21," he says. But he also noted this attitude wasn't what he had learned during previous military service in the West Bank or on Israel's northern border with Lebanon.

"There is a good reason, of course, to protect soldiers' lives," he says. "So you need to shoot and you can't now try to discuss rules of engagement. But I think the commanders just let loose, let's do whatever we want, it's our time to shine, it's the war we were prepared for. And everything is fine in war. I think it's their excuse, in my mind."

Avner Gvaryahu, who directs public outreach in Israel for Breaking the Silence, says the organization double-checks every story but hides soldiers' identity for their protection. He also says the aim is to not point fingers at individuals.

"It is so easy to find a scapegoat, so easy to say that a specific person is the problem. There definitely are specific actions, but it goes all the way to the top," he says. 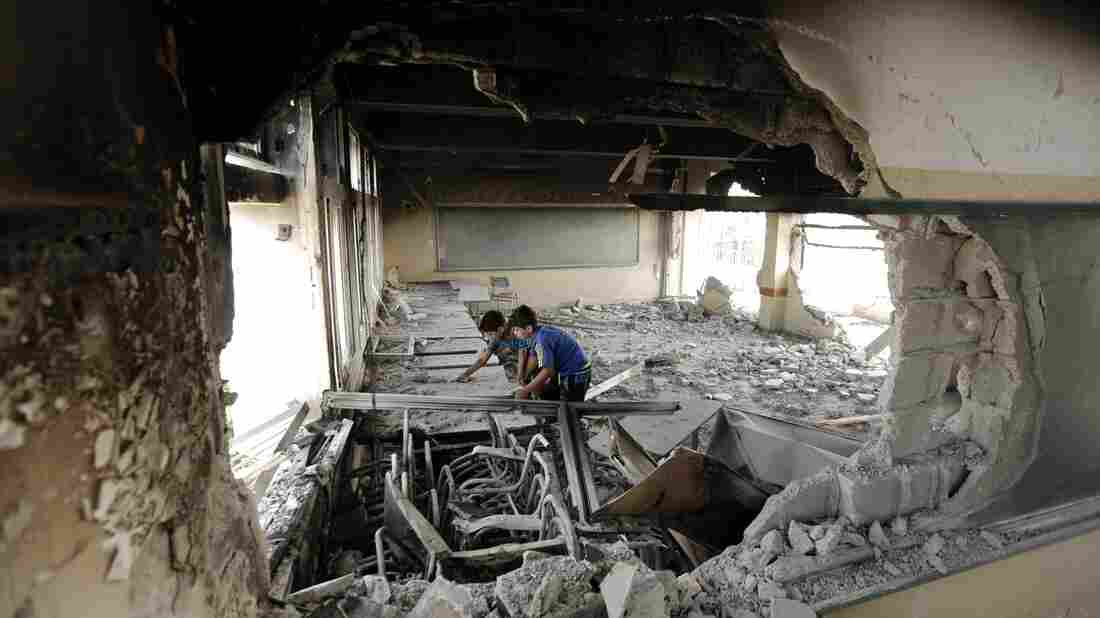 Palestinian children stand in a heavily damaged school in Gaza City on Aug. 5, 2014. Many civilian buildings were damaged and many Palestinian civilians were killed in the 50 days of fighting. Mohammed Abed /AFP/Getty Images hide caption 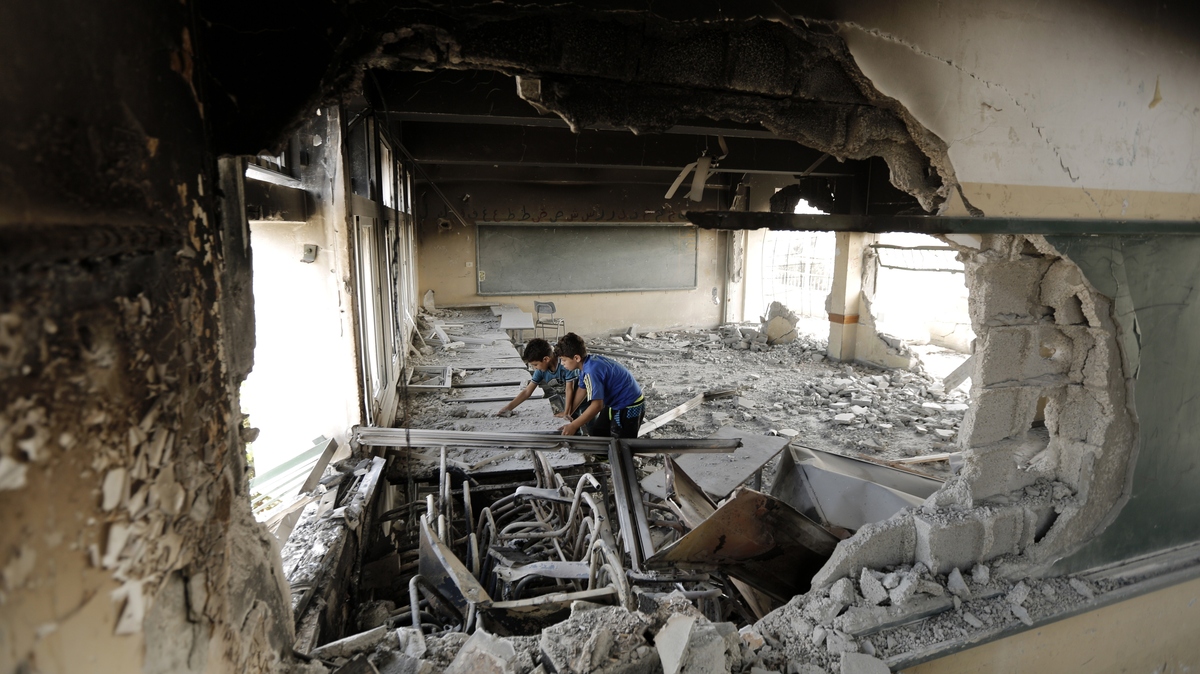 Palestinian children stand in a heavily damaged school in Gaza City on Aug. 5, 2014. Many civilian buildings were damaged and many Palestinian civilians were killed in the 50 days of fighting.

Israeli military spokesman Peter Lerner says one of the biggest challenges the military faces is operating in an urban environment, where militants shoot rockets from residential areas. He questions why Breaking the Silence didn't first share its stories with the military before going public.

"They've been building this file for months and months now," Lerner says. "Clearly we need to be looking at certain things there, but they haven't conveyed those to us, so it raises questions about what is the intent behind this entire report."

The military is carrying out its own investigations into allegations of improper actions by soldiers, some brought to prosecutors' attention by soldiers who fought in Gaza last summer.

Lerner says Breaking the Silence has a political motive. The group says its intent is to reveal what soldiers are actually doing on the ground.

One soldier, whose voice was distorted to hide his identity in a video released by the group, said his unit tried to use up all its machine gun ammunition just before getting resupplied. It didn't matter whether targets had been identified.

"We just kept shooting and shooting, almost nonstop, until the barrel was overheated," he says. "When it does, it's no longer usable. But we didn't really care, because we knew that no one would ask questions. If anyone did, we could say, 'Well, it was for the sake of the operation. It didn't happen on purpose.' "

In other stories released by Breaking the Silence, soldiers say two women were killed because they looked suspicious using cellphones. An old man was wounded, then covered in dirt by a bulldozer because, soldiers say, they feared he might have a grenade. Several soldiers who told their stories to Breaking the Silence said they did so because their friends and families didn't want to hear.