Accessibility links
In Iraq, A Kurdish Warrior-Diva Sings Against ISIS, Despite Threats : Parallels She goes by the name Helly Luv and made her latest music video — a tribute to Kurdish fighters battling ISIS — as bullets flew in a front-line village. But not everyone is happy with her style. 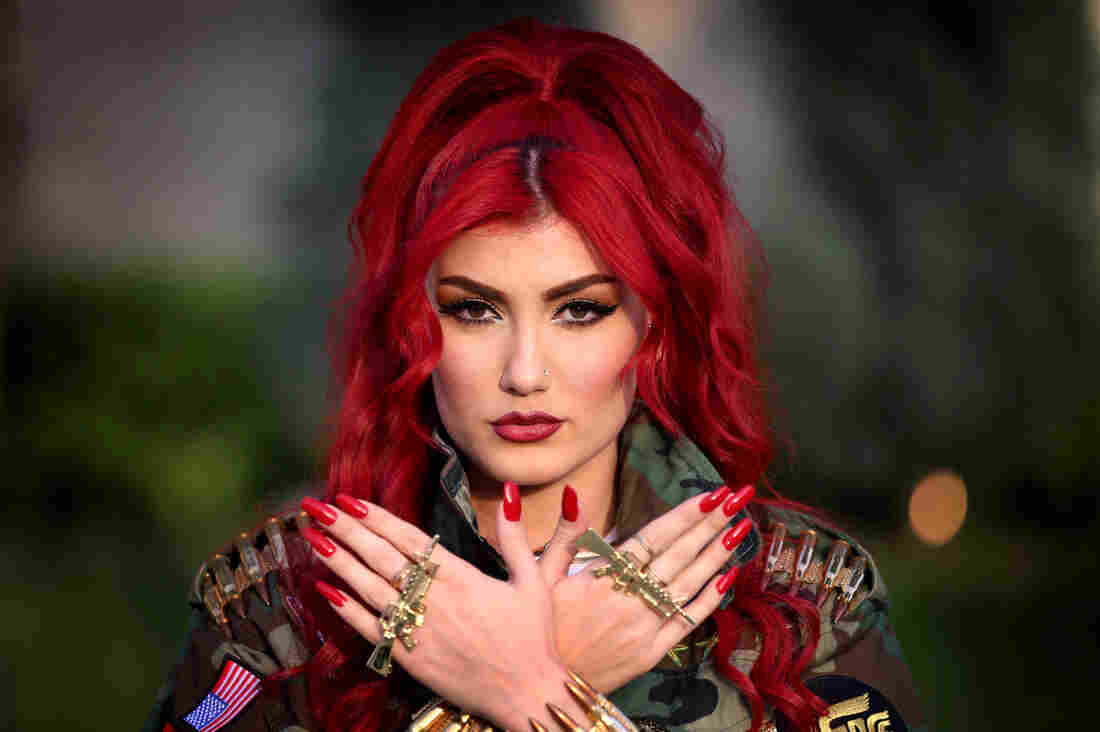 Iraqi Kurdish singer Helly Luv sings in support of Kurdish fighters, called the peshmerga, who are battling the Islamic State. Her songs are popular among Kurds in northern Iraq, though some critics say her outfits and dancing are un-Islamic. Safin Hamed/AFP/Getty Images hide caption 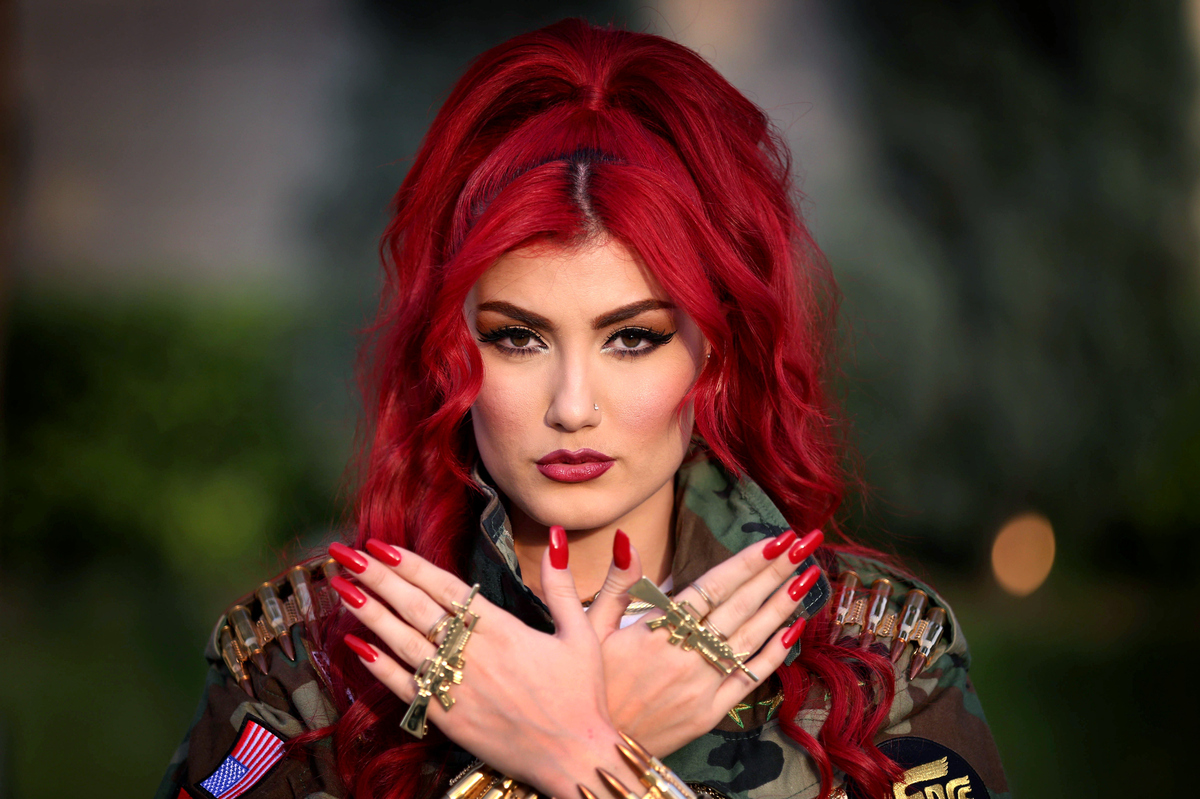 Iraqi Kurdish singer Helly Luv sings in support of Kurdish fighters, called the peshmerga, who are battling the Islamic State. Her songs are popular among Kurds in northern Iraq, though some critics say her outfits and dancing are un-Islamic.

Not even war can keep a good pop star down. In northern Iraq, where soldiers are battling the self-declared Islamic State, or ISIS, one fiery singer is on a mission to stir up patriotic sentiment.

Crimson-haired Iraqi performer Helly Luv has a recording contract in the U.S., but she didn't want to shoot her latest video in Hollywood.

Her track, called "Revolution," is a tribute to the ethnically Kurdish soldiers known as peshmerga who are fighting against ISIS. So she took a video team to a front-line village, as bullets flew and battles raged.

"Yeah!" she tells me. "We shot the video right there, and it was so crazy."

The video features a bejeweled Helly Luv — herself Kurdish — dancing in a traditional peshmerga outfit, and in a tank firing a shell.

"Rise up, 'cause we're so much stronger as one," she sings in English. "Breaking the silence as loud as a gun. Brothers and sisters, we all come from one. Different religions, we share the same blood."

The video for "Revolution" was shot over three months in a frontline village in northern Iraq.

The video plays all the time on TV in Iraq's Kurdistan region.

Shooting it took three months. "And sometimes we had to leave," she says. "Like, they said, 'You have to get out of here.' "

But Helly Luv says it was worth it. She wanted to glorify the peshmerga.

"People didn't know from the outside how powerful and how, oh, my God, how strong they are," she says.

As she sits in a hotel, Helly Luv explains that her role as a warrior-diva comes after a long, hard journey for her family.

Her real name is Helan Abdulla. She was born in 1988 in Iran, as her family was escaping Saddam Hussein's attacks on Kurds. They fled through Turkey, eventually settling in Finland.

As a teenager there, she saved up cash and moved to Los Angeles, seeking stardom. She took the name Helly Luv from her first name, Helan.

In the U.S., she landed a role in a movie by a Kurdish director, Batin Ghobadi, which brought her home to northern Iraq in March 2013. She played a character named Leila, searching for a missing loved one amid rugged landscapes and hidden memories. She traveled all over the region while filming.

"I was blown away," she recalls. She had visited Iraq as a little girl. But this time, she was struck by how much her country had developed and how serious everyone seemed about the longstanding dream of an independent Kurdish nation.

"I wanted to create a song that would represent my life as well, but also the Kurdish people fighting so long and risking everything for a dream," she says.

"Risk It All," her first song recorded in Iraq, came out in the spring of last year.

The singer received threats after releasing "Risk It All" last year.

"Let me out, let me go, I gotta break out of this cage," she drawls over a pumping beat.

For her video outfits, she took inspiration from her mom, who was a peshmerga soldier in her youth — and Helly Luv's sexy fighter look was born.

Shortly after she released the song, ISIS staged a huge offensive in northern Iraq. "Risk It All" became a sort of anthem as the peshmerga fought back.

But Helly Luv's clothes and dancing were deemed un-Islamic by some extremists. Social media lit up with threats.

"People would say, 'She should be stoned and killed,' and this and that," she recalls.

Some of the threats were in Arabic, from ISIS supporters. But some were in Kurdish, coming from the very people she was trying to support.

"The response from some of the people, they just want to destroy and to break me in pieces," she says.

To find out what people think of Helly Luv now, I've come to the bazaar in Irbil on a long Ramadan evening after prayers, when it's full of people selling jewelry and ice cream and tea.

Her CDs are on sale at a little stall. But Soran Hawleri, an off-duty fighter in the peshmerga — the soldiers she sings about — doesn't care for her.

He says she's not representing his culture or traditions. And she's making money from the peshmerga. She could, he says, be supporting their families if she really cared.

But a lot of young people like Helly Luv — even an Islamic law student like 21-year-old Dilpag Thahir.

"She is very good," he says, "very, very good." Why? "Because she sings about Kurdistan."

Thahir likes Helly Luv even though her dancing and clothes aren't really compatible with Islamic law. "She says that's what she wants to do, and you can't stop her," he shrugs.

But the criticism nearly has stopped her.

And she has played only two concerts in Iraq.