Accessibility links
When Sanctions Lift, How Will Iran Spend Its Billions? : Parallels Once Tehran takes steps to roll back its nuclear program, an estimated $100 billion in frozen overseas assets will become available. Iran has many needs to meet with its battered economy. 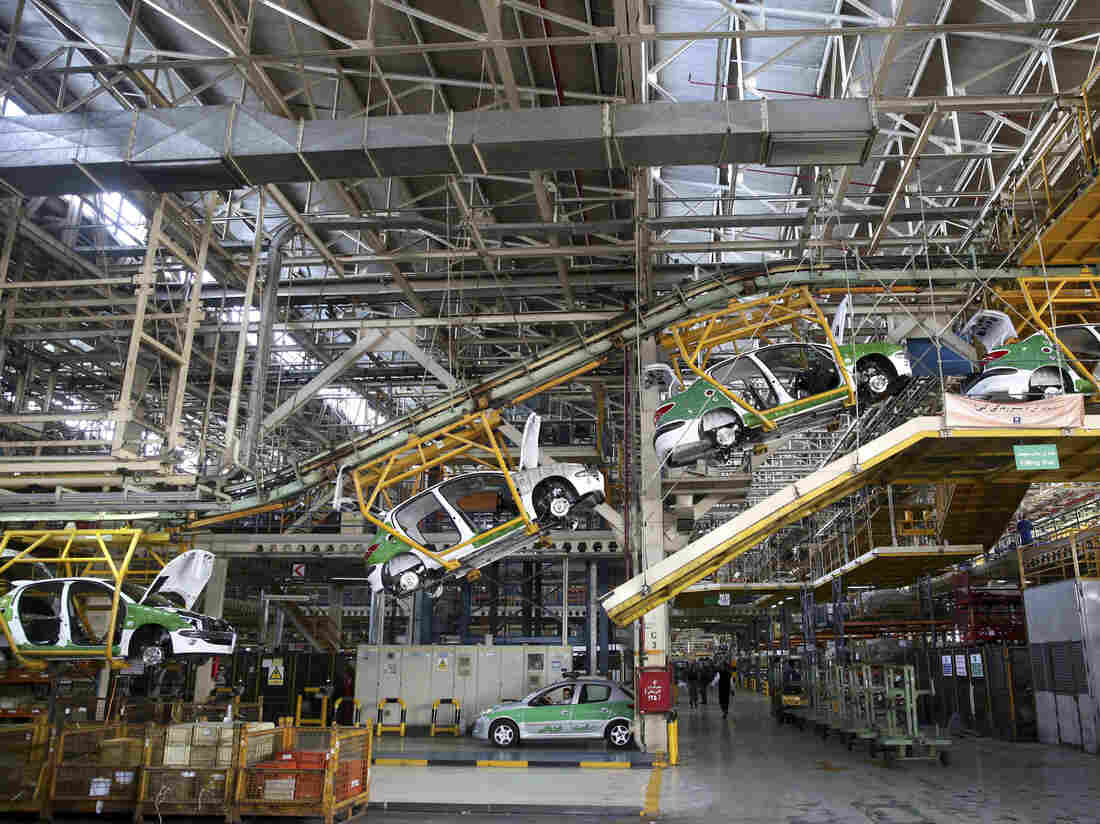 The state-run Iran-Khodro plant manufactures vehicles including the Peugeot 206 car, shown on a production line in 2014 near Tehran. Iran's robust auto industry was built in response to sanctions. Ebrahim Noroozi/AP hide caption 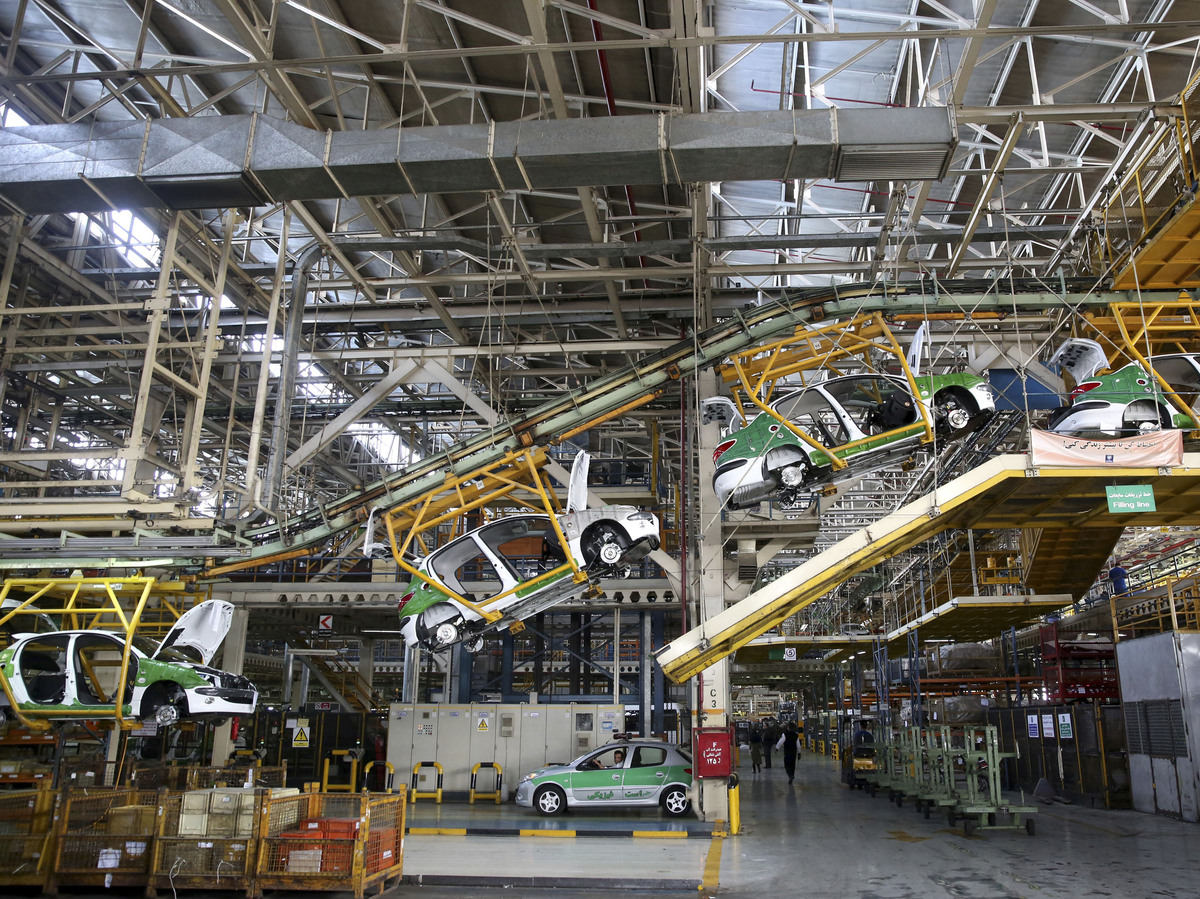 The state-run Iran-Khodro plant manufactures vehicles including the Peugeot 206 car, shown on a production line in 2014 near Tehran. Iran's robust auto industry was built in response to sanctions.

If the nuclear deal with Iran is implemented, Tehran stands to gain a lot of money. There are differing estimates of exactly how much: The U.S. Treasury Department has said something on the order of $100 billion is in blocked overseas Iranian accounts, while Iran's Central Bank governor puts the figure closer to $29 billion.

Whatever the exact amount, critics like Republican presidential candidate Lindsey Graham say that kind of cash will allow Tehran to make bad situations in the Middle East even worse.

"The most radical regime in the region, the Iranian ayatollah and his henchmen, are going to get $100 billion over the next decade," Graham told the conservative website The Daily Signal.

"They're going to put it in their war machine to further destabilize the Mideast. You might as well have written the check to Assad, Hamas and Hezbollah," Graham said, referring to Syrian President Bashar Assad and the Iranian-backed militias based in the Gaza Strip and Lebanon.

Assad's government has already received billions in loans from Iran, and a rising economic tide would certainly allow Iran's Revolutionary Guard Corps to replenish its coffers.

But those familiar with Iran's ravaged economy say it's unlikely Tehran will go on a foreign policy spending spree.

For starters, says Anthony Cordesman at the Center for Strategic and International Studies, Hamas and Hezbollah couldn't absorb billions of dollars in cash and weaponry.

Then there are Iran's own enormous economic needs. By most accounts, that's what brought the country to the negotiating table in the first place. Virginia Tech economist Djavad Salehi-Isfahani says addressing those needs is not just a matter of good policy, it's also a question of President Hassan Rouhani's political survival.

With parliamentary elections scheduled for next spring and a presidential race the following year, Isfahani says the pragmatic wing in Iran needs to be able to get the economy growing very quickly indeed.

"There is no question that the needs are huge," he says.

And the opportunity to turn things around is there: "There are hundreds of unfinished projects," he says. "People are going to be going back to work on those projects. The government can pay back the contractors to whom it owes a lot of money. So a lot of the wheels of the economy will start spinning."

Once the initial cash influx dries up, however, serious economic improvement will take both time and a change in restrictions that the government has long imposed on its population. For instance, Isfahani says, beyond oil and gas, the No. 1 opportunity for Iran would be catching up in the communications sector.

"Iran's got a very sophisticated, tech-savvy youth population, dealing with an Internet structure of 15 years ago," he says. "Broadband service in Iran needs to expand really fast, and that is gonna take billions of dollars."

It would also take a new willingness by Iran's security establishment to loosen controls on technology — and there's no sign of that.

Iranian business leaders and analysts say it's already clear that economic gains will be sold to the public as a continuation of Iran's so-called "resistance economy" — its self-sufficiency in the face of "arrogant" Western powers — and not as a prelude to greater engagement with the outside world. This sales pitch is aimed at placating hardliners unnerved by Rouhani's success in engaging with the United States.

Neighboring Arab states, meanwhile, have their own reasons for not wanting to see Iran's economy pick up. Robert Jordan, a former U.S. ambassador to Saudi Arabia, says Iran didn't just sit back and watch its oil industry degrade under international sanctions. It started to create a non-oil economy — and did so with some success.

"And so they now make more cars than Italy," Jordan says. "They are very robust in their non-oil economy, which countries like Saudi Arabia have not been able to do." As Iran reasserts itself, he says, "This is all going to be, I think, a very bleak competitive environment for the Saudis."