Accessibility links
Covering Greece: When It's Not Just A Story, It's Personal : Parallels Reporter Joanna Kakissis was born in Greece but raised in the U.S. She returned to Greece in 2010 as the country's economic crisis began. She describes covering a story that often hits close to home. 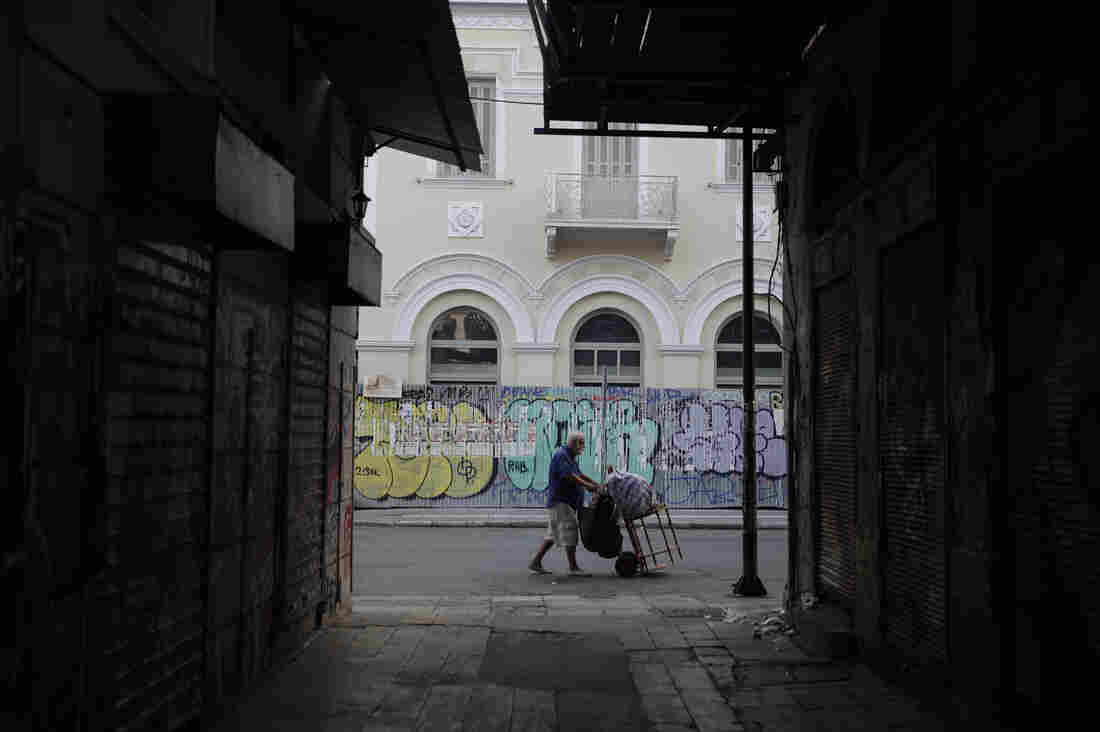 A man pushes a trolley in central Athens, where Joanna Kakissis has made her home. For Kakissis, a Greek-American, the task of reporting on Greece's financial crisis has been both painful and illuminating — a glimpse that only the emotional middle-distance can afford. Petros Giannakouris/AP hide caption 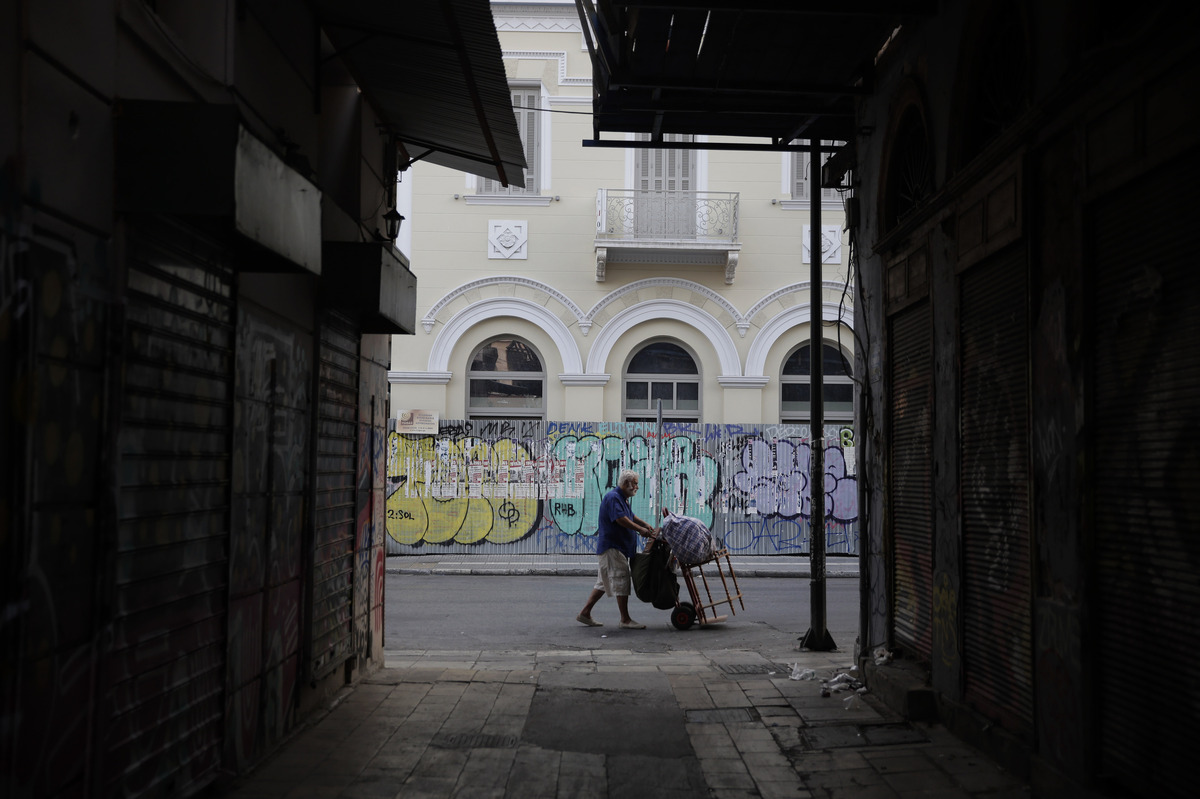 A man pushes a trolley in central Athens, where Joanna Kakissis has made her home. For Kakissis, a Greek-American, the task of reporting on Greece's financial crisis has been both painful and illuminating — a glimpse that only the emotional middle-distance can afford.

Editor's Note: Reporter Joanna Kakissis was born in Greece but grew up in the U.S. She returned to Greece in 2010 just as the economic meltdown was beginning. She describes what it's like to cover a story that often feels very personal.

I live in a central Athens neighborhood that some describe as run-down, a term I still think is inaccurate and incomplete, applied by drive-by visitors from well-to-do suburbs and fellow journalists looking for a neighborhood to set the stage for a story about Greece's post-austerity impoverishment.

My flat is on a stub of a one-way street lined with balconied apartment blocks and a few bitter-orange trees. The street is bookended by a tiny, forgotten city park and a rocky dirt lot that was supposed to become a church but instead, due to locals opposed to tolling bells, turned into a makeshift parking lot.

My neighbors include retired teachers, shop-owners, young couples with babies, an underemployed copyright lawyer and an untalented aspiring folk musician who sings like a goat.

My relatives also live on this street — my sister, my mother, my cousin and my resilient Uncle Thanassis, who lived through World War II and the Greek civil war that followed.

My uncle moved onto this little street in the 1960s, when this area was largely undeveloped and neighbors had donkeys and chickens in their backyards. At 85, he remains the unflappable voice of reason to our neighbors, who are all struggling to pay bills and mortgages, who have lost jobs and prospects, who can't save money to support their kids through college, who plan downscaled weddings and baptisms in a cloud of uncertainty.

My uncle was the first to visit the elderly couple near the park after their son and only child, a civil engineer in his early 50s, died a couple of years ago of a stress-related heart attack after his business went under, leaving him unable to support his family.

"There is nothing I can say that will make this easier for you," he told the sobbing couple, both in their late 80s, whom he had known for half a century. "But I am here for you. I am here."

My uncle's younger brother — my father — moved us to the American Dakotas from Athens when I was 4 years old. Growing up American, I only had a hazy recollection of my Greek life, an emotional scene of my mother weeping as she embraced her father, a soft-hearted, mustachioed orange farmer in Crete, before we moved halfway across the world. 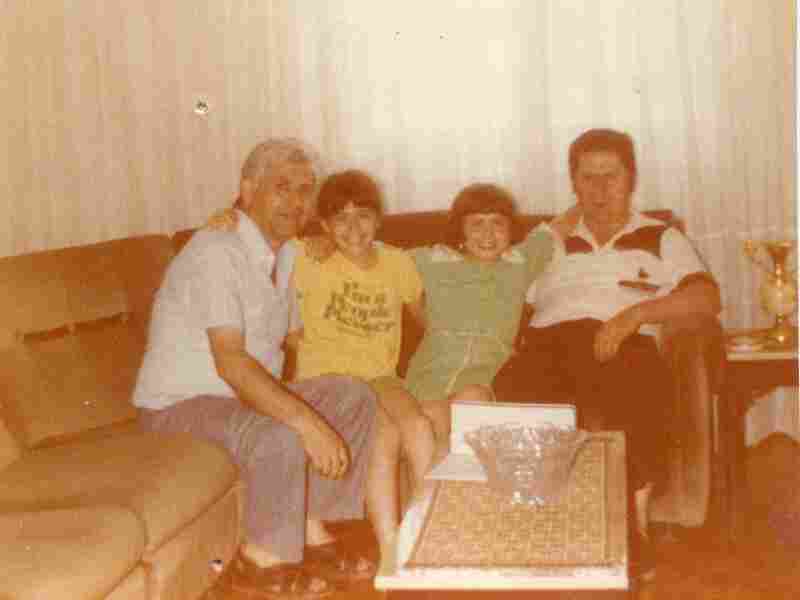 The author (second from left) with her uncle Thanassis Kakissis (far left), sister, Amalia, and father, Giorgos, during a family visit to Athens in 1979. Courtesy of Joanna Kakissis hide caption 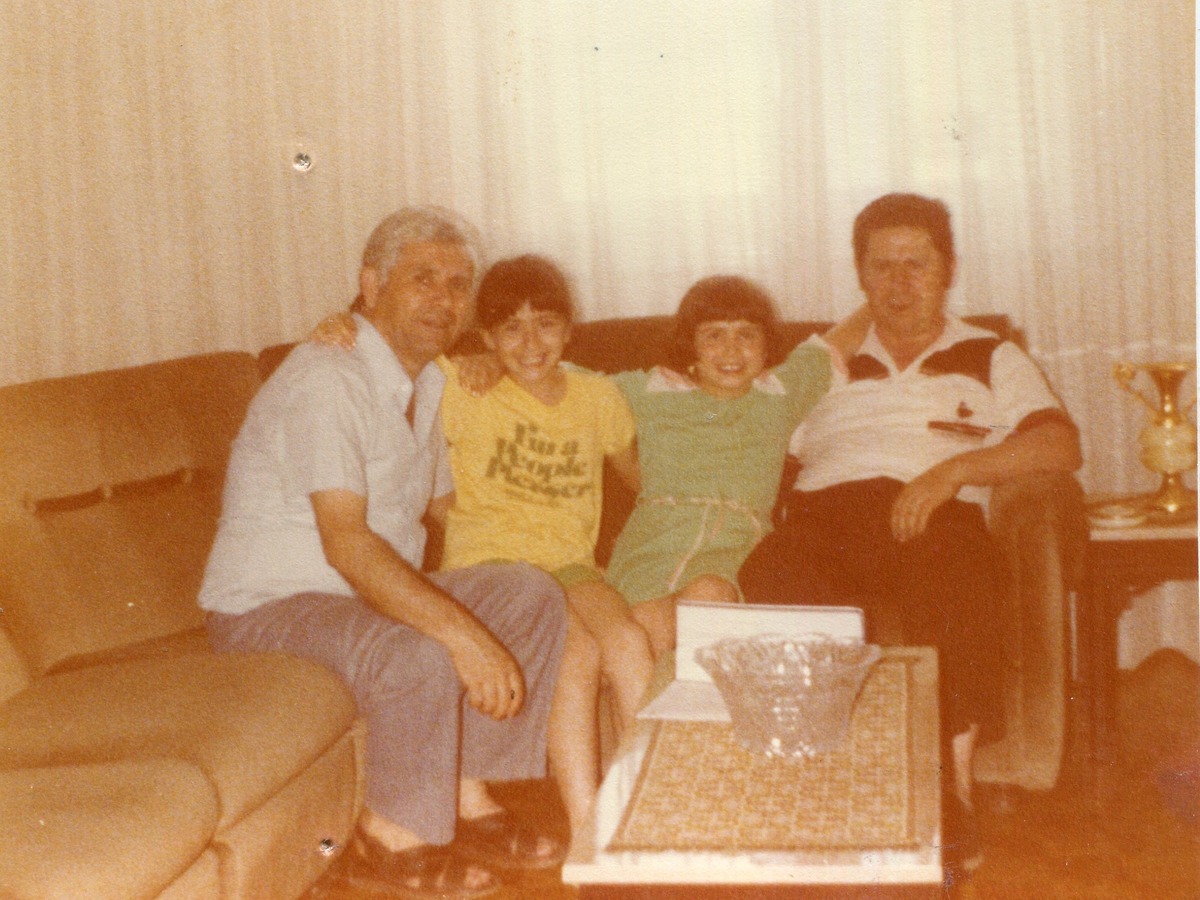 The author (second from left) with her uncle Thanassis Kakissis (far left), sister, Amalia, and father, Giorgos, during a family visit to Athens in 1979.

I had returned for brief stays a couple of times, when Greece's prospects seemed bright. During the 2004 Summer Olympics, for instance, the capital seemed to operate flawlessly, showing everyone that this tiny country could pull off three weeks of blockbuster events.

When I returned for a long-term stay as a reporter in 2010, the feeling that Greece was on the way up had disappeared. Greeks were shocked to discover that their country was deeply in debt and about to go bankrupt. They blamed their politicians, blamed themselves for electing these politicians. And they felt defeated after their leaders signed over much of the country's sovereignty to creditors from the European Union and the International Monetary Fund, in exchange for bailout loans to keep Greece solvent.

Reporters are not machines, even when we're covering stories in lands to which we have no connection. Even then, we work hard to balance news, context, perspectives and storytelling with the emotional weight of the stories we're experiencing or being told.

It's much harder to keep an emotional distance when we're living a story, seeing it unfold in real time as a resident. I've met homeless people in central Athens, rummaging through dumpsters for clothes and food. I've met people who sit in darkened houses because they have run out of money to pay their electricity bills. I know people who have committed suicide. I know people who have lost everything they've worked for, like my cousin Manolis in Crete, who built his home improvement and metalworking business from scratch and went bankrupt during the crisis. He and his wife and two children lost their house and now live with his sister. He works as a day laborer.

At the same time, I'm hypersensitive about sensationalism and stereotyping, two lenses that have distorted coverage of this crisis. That's because, as a Greek-American, I sometimes internalize the exaggerations as personal insults.

Not all Greeks are tax evaders, and no Greek I know is lazy, I'll huff to myself. Most Greeks don't protest, and only a minuscule number actually throw petrol bombs during protests. And yet, whenever that happens, a TV reporter perched on a rooftop will be declaring that all of Athens is on fire, furthering the trope about the unruly, undisciplined Greeks who want to have their cake and eat it too.

But I've had to face painful truths, too. That corruption is still rampant, and that it continues because Greeks have failed to tear down the special interests that feed from it. That the public sector, for years a repository for unqualified friends of short-sighted politicians, is inefficient and even primitive, even after welcome changes in recent years to ensure new hires are based on merit, not cronyism.

That political dialogue is polarized, hateful and often vengeful. That Greek politicians of every stripe are woefully unprepared to lucidly manage a crisis that could unravel this country and tear it away from the eurozone into some badly-managed transition to a devalued national currency. This void of competence has created groups like Golden Dawn, a party of neo-fascists with Nazi roots who glorify violence and xenophobia as ways to "clean" Greece of corrupt politicians and foreigners "leeching" off Hellenism. The party holds 17 seats in the 300-member parliament.

The economic crisis has also rekindled an identity crisis here, as story after story references the soaring heights of Ancient Greece, a history that's still the greatest source of pride here even after thousands of years.

The modern Greeks have much more in common with the Byzantines and even the Turks, whose ancestors, the Ottomans, enslaved the Greeks for 400 years. But that's a challenge to the narrative of Hellenism, that this country cannot be defeated because it gave the world democracy and artistic, philosophical and mathematical literacy, and it cuts into a Greek's heart like nothing else.

Their Country In Turmoil, Some Greeks Now Lash Out At Each Other

At Last, Banks Reopen In Greece After 3 Long Weeks

At Last, Banks Reopen In Greece After 3 Long Weeks

That existential threat may be a source of the conspiracy theories that seem to flourish here, such as the whopper that claims the Rothschild banking family (blamed by anti-Semites for controlling wealth and wars) owns the international press (a theory once espoused by a former government spokeswoman from the conservative New Democracy party) and is profiting from the economic crisis.

Conspiratorial thinking even laces the public debate of the current leftist government, which blames eurozone leaders for inciting a coup by forcing the government to sign an onerous bailout agreement. The parliament speaker, a lawyer educated in France and the United States, even claimed the the new deal would cause "social genocide."

But these melodramatics in parliament and in many media outlets don't resonate with most people in my neighborhood, who are too consumed with staying solvent, humane and united when everything is falling apart.

Two of our neighbors — a young couple with twin baby boys — ended up leaving a few months ago after they lost their jobs and fell behind on their rent.

The elderly couple who lost their son are now one — the man died after a long illness. His widow is fragile and keeps the curtains drawn.

Another elderly couple spent their savings to help pay their adult son's mortgage, because the company he and his wife worked for hadn't paid them in more than two years.

The musician with the voice of a goat stopped pursuing his dream of folk music stardom and is now temping. Two of my cousin's three kids went to military school, where they're at least assured a job and a modest salary.

And every day, on his way to the supermarket, my uncle Thanassis strolls past their homes, greeting anyone outside with a warm smile and a wish for good health. Sometimes I see him, a small, dignified figure with a cropped mane of wavy, snow-white hair, making his way down the street with the resolve of a survivor, spreading a calming sense of normalcy in a country where nothing feels safe or sure anymore.