Accessibility links
In Greece, Struggling Businesses Are Choked By Capital Controls : Parallels They're facing a double whammy. Not only do customers have less money to spend, but businesses can no longer pay their foreign suppliers for goods and raw materials. Many fear they'll have to close. 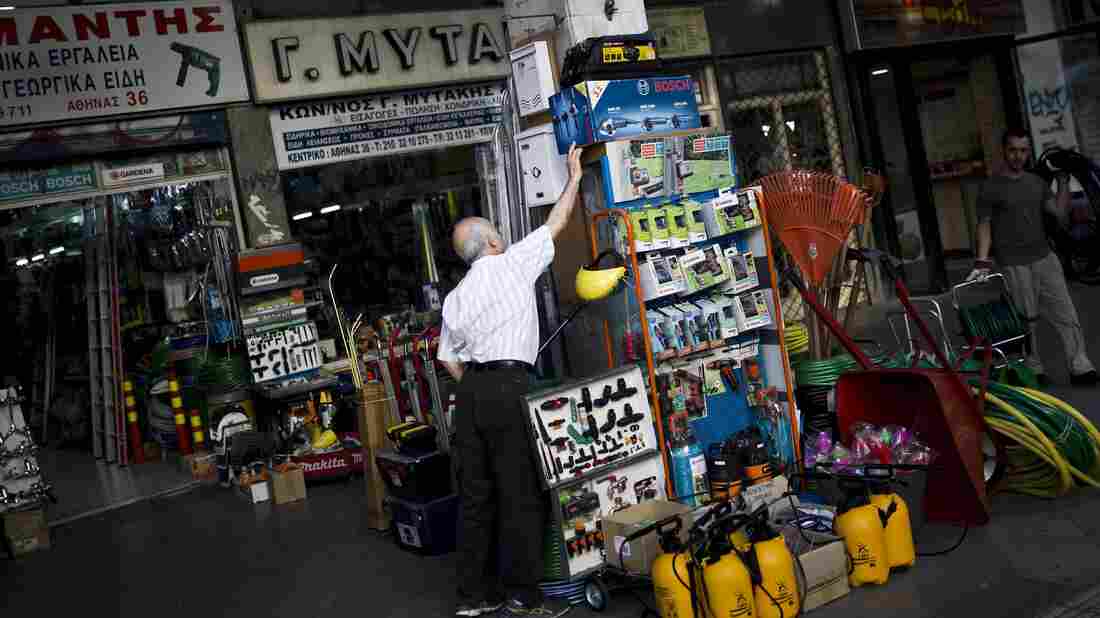 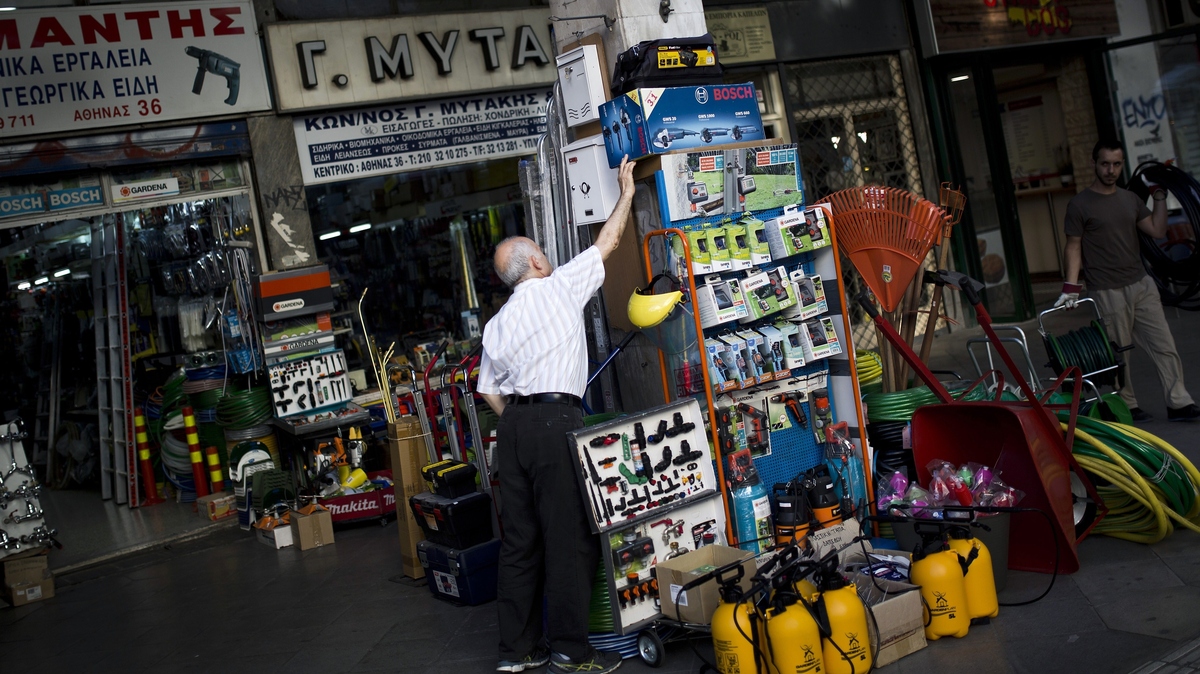 A shop owner arranges his goods in central Athens on Monday. Greek banks have reopened, but capital controls remain in place.

This week the Greek Parliament approved a set of reforms it hopes will lead a new bailout. The country remains under strict capital controls that bar people from sending money abroad. In a country that imports much of what it uses and eats, that's having a debilitating effect on the economy.

The past few years have been tough for the merchants in Athens Central Market. But the closing of the banks earlier this month made a bad situation much worse.

"Under the capital controls people are limited to a certain amount of money a day so they have to prioritize what they need," says Mateos Tsoupakis, who runs a fruit and vegetable store. "When they come in here they don't buy a lot. They don't want to spend all the money they have."

Over the past five years, about 250,000 businesses have folded in Greece out of a total of 900,000. And Ioannis Chatzitheodosiou, who heads the Athens Chamber of Tradesmen, says many of those that remain are deep in debt.

Greece By The Numbers

"These businesses are already hurting," he says. "Now these capital controls are doing even more damage because people are consuming less and income is falling."

But poor sales aren't the only problem Greek businesses face. Excluding the food sector, Greece imports about 70 percent of what it sells.

Apostolos Kosmidis runs a bird store. The brightly colored canaries and parakeets he sells are bred in the Netherlands and imported into Greece. He buys bird feeders from Poland and pet food from Austria. Since the capital controls, he has been unable to send money to those countries so he can't buy anything for his store.

"It's simple. If we keep going like this we're going to close," he says. "Our business will close. It's that simple."

While the banks reopened this week, the government hasn't said when capital controls will be lifted, and most people expect it will take months. So businesses are stumbling along in the dark, unsure of how to proceed.

Kiriakos Kaplanoglou runs a company that provides materials used in metal plating for things like doorknobs and jewelry. He's not allowed to send money to his suppliers in places such as Germany and Italy.

"Some of them have already sent the materials to us and after that the capital controls were imposed to Greece so we cannot pay them," he says. "And of course they don't sell anything else to us."

Kaplanoglou is trying to get around the controls by asking his foreign customers to make payments into a new account he's set up in Cyprus. Meanwhile, to keep his stockpile of materials from running low, he sells his customers only what they need right away. And he no longer gives them months to pay.

"It's not a rule; it depends on the customer, but basically the payment terms have been changed," he says. "They're almost cash."

Kaplanoglou says he can survive for a while, but a lot of companies aren't so fortunate. The Athens Chamber of Tradesmen estimates that about 15 percent of Greek businesses will close by September if the controls aren't lifted — and that number will grow with each passing month.