Accessibility links
Trained By U.S., Syrian Fighters Stumble As They Hit The Battlefield : Parallels A few dozen moderate rebels were recently sent into northern Syria. But before they could go on their first mission, several were captured. It's the latest sign of trouble with the program. 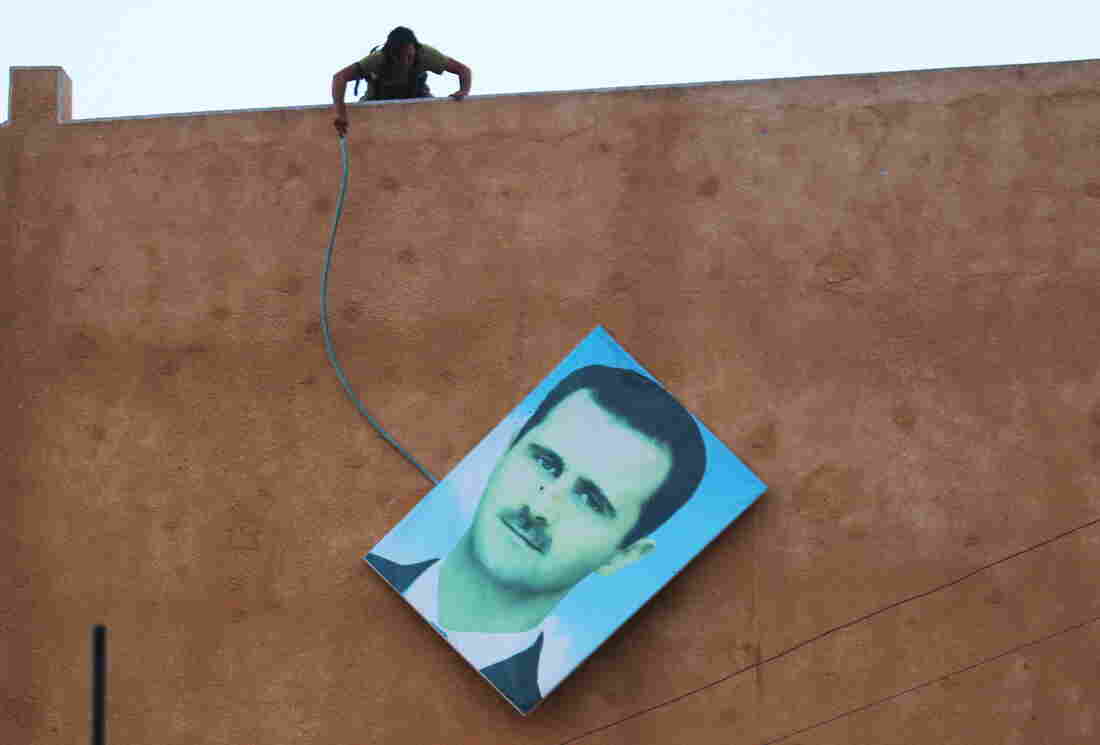 A fighter with Jabhat al-Nusra, the al-Qaida affiliate in Syria, takes down a picture of Syria's President Bashar Assad in the northwestern city of Ariha in May. Jabhat al-Nusra is strong in this area, and recently captured Syrian fighters trained by the U.S. Ammar Abdullah/Reuters/Landov hide caption 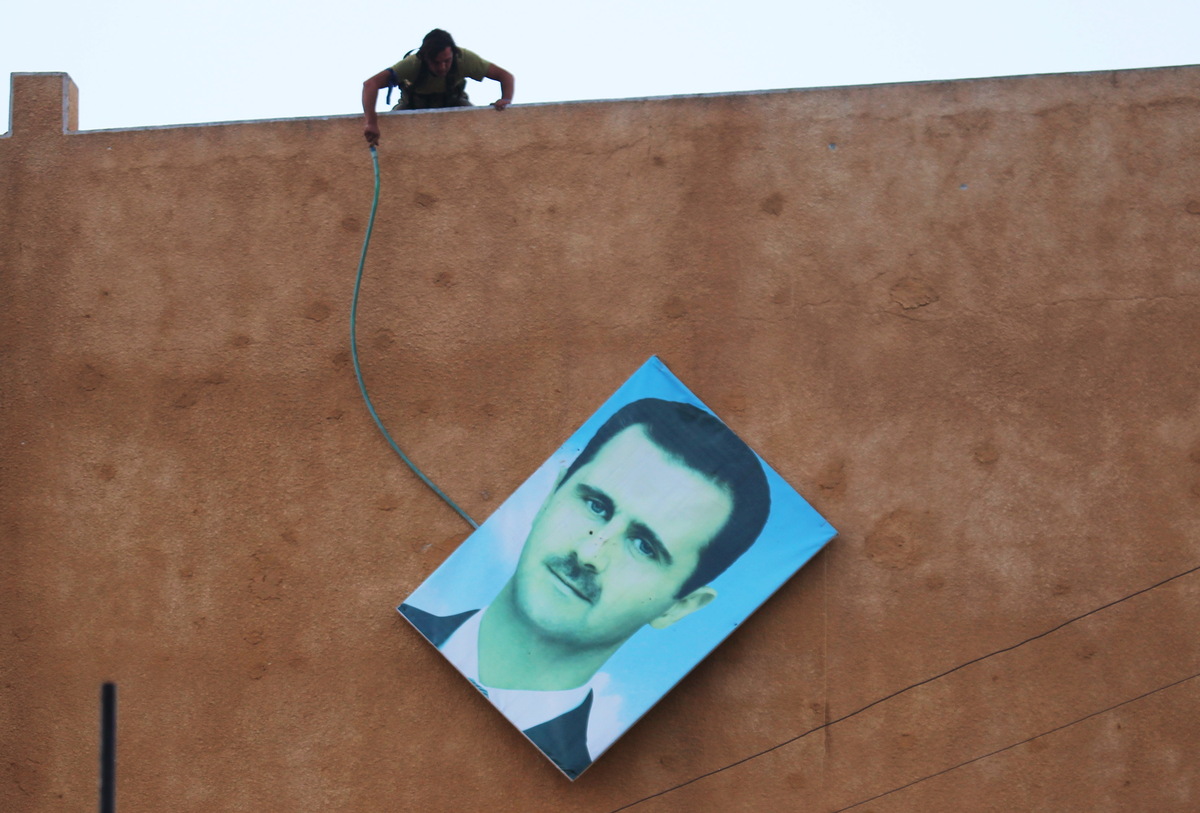 A fighter with Jabhat al-Nusra, the al-Qaida affiliate in Syria, takes down a picture of Syria's President Bashar Assad in the northwestern city of Ariha in May. Jabhat al-Nusra is strong in this area, and recently captured Syrian fighters trained by the U.S.

A small group of U.S.-trained Syrian fighters entered northern Syria late last month and waited for their mission. They were on a base, with American supplies that included heavy machine guns, communications technology and laser pointers for directing airstrikes.

These fighters are, in effect, the elite members of a much bigger rebel group called Division 30. Their mission is to fight the self-declared Islamic State, though there are multiple factions involved in the Syrian civil war.

But on July 29, the Syrian branch of al-Qaida captured the Division 30 commander, along with several of his men, as he was returning to base after a meeting. Two days later, al-Qaida attacked the base.

The al-Qaida affiliate, known as Jabhat al-Nusra, then made a video parading some of its captives before the camera.

Those seized included regular fighters from Division 30, as well as some from the newly created force. There are different reports on how many of each were taken.

A captive who is described as a guard from the Division 30 headquarters says the new fighters have direct contact with the Americans, and that each man received $400, 400 Turkish lira, an M16 rifle and a device to contact the U.S.-led coalition.

Last year, the U.S. Congress approved Pentagon training for moderate Syrian fighters to battle the Islamic State, but the effort has gone slowly. The goal is to train up to 5,000 fighters a year. But Defense Secretary Ash Carter said last month that only 60 had been trained since the program was established last fall.

Meanwhile, Jabhat al-Nusra said in a statement that American-backed rebels called in airstrikes for the first time after the attack on Division 30 that killed some of its men and forced it to retreat for a while.

But fighting continued, and most of the brand-new fighters who weren't captured are now laying low at bases. Some might be hiding in refugee camps or trying to flee to nearby Turkey.

Analyst Charles Lister follows Syria closely and says the episode "is not a particularly good indicator in terms of these forces' capabilities, in terms of protecting themselves against potential adversaries."

Pentagon spokesman Jeff Davis says it shows the challenges in a dynamic and changing environment, and adds that hundreds more anti-ISIS fighters are in training. But one officer in Division 30 says the actions by the U.S.-led coalition didn't inspire much confidence.

The officer, Ammar al-Wawi, is in Turkey right now. He says the coalition delivered airstrikes, but they came an hour and a half after they were requested and far from the place where the battle was.

Plus, he says, the training of anti-ISIS fighters is taking too long.

Some moderate commanders on the ground said it could be a good sign that the U.S. is now bringing in airstrikes to support Syrian rebels on the ground.

But Adnen al-Hussein, a Syrian activist now in Turkey, says he sees the effort as a failure.

He says he knows people who were going to participate and pulled out before starting the training, because they wanted to fight Syrian President Bashar Assad, not just ISIS. And people will be even less likely to join now that they've seen what happened to Division 30.